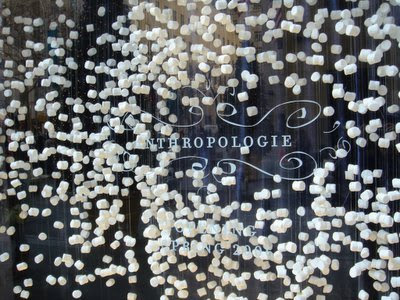 A Letter to Decorno about Anthropologie

I’ve never emailed you before, but I am an avid reader of your blog. I’m a fellow Seattleite, and I don’t know where I was going with that…but your blog rocks. Anyway, I’m writing you because I don’t know where else to turn to, and we need to do a MAJOR expose on the evil empire known as Anthro. I have a friend (totally reliable source) who used to be a manager there, and here is his horrifying tale: After the store had had furniture and accessories for a long time, and after they had been slightly marked down on sale and not sold, he had to take the merchandise and mark it down to “ten cents” (I’m assuming for bookkeeping purposes). After that, he had to take it in the back room and DESTROY it. He says: “I’ve literally taken a hammer to plates, thousand-dollar chandeliers and more.” Even the vintage stuff. If he had taken it home without destroying it, he would have been fired. If he had given it to a co-worker, he would have been fired. Do you want to know why they have this outrageous policy? Two words (their words): “Brand Integrity.” They couldn’t mark it down so low that people could “expect to walk in to Anthropologie and find a deal.”

I nearly died when I heard this story. Can you freakin’ believe that? Perhaps we (or you, via your blog) can get the word out to boycott stupid Anthro. Or…to maybe buy everything that’s on sale so that it doesn’t get destroyed? Ha, I’m not sure what would be the better method. I promise I’m not a crazy…so…hopefully this doesn’t make me one by being really upset at this bit of inside info.

One of your loyal bitches,

Thank you so much Decorno for bringing to light this small portion of the shallowness of the Anthropologie empire- so many style blogs continue to highlight Anthropologie every single season for their innovative displays, merchandise etc. Yes, their kool-aid is very very seductive.

As a former Home manager with Urban Outfitters and Anthropologie (and having also been a long term manager with Williams Sonoma- Ill get to them later…) all of the above is true. I slashed clothing, gave some to charity, i had to hammer quite a lot of pieces (for “safety” reasons, tried to repair defective low quality pieces, I did it all.

Some of it gets donated to a charity of each stores’ choosing, all item’s recorded so that and submitted to corporate so that teh number crunchers can make massive tax deductions on it, i’m sure.

One time, a beautiful necklace of semi precious stones broke, with no RTV (return to vendor) policy. I was told to throw it all away. I couldn’t do it and smuggled the loose beads out in a starbucks coffee cup (as managers and associates alike were searched for stolen merchandise)… it is still with me as i restrung the beads.. why waste to follow rules? though i followed them SOOOO many times, my beautiful topaz beads were the least of their worries, and accounting still got the report that they were destroyed.

I truly despise Anthropologie on so many levels (like Anonymous 12:40pm), theyhave no appreciation for their employees, unethical practices in manufacturing, and steal many many designs from other artists and designers.

Thank you Decorno for publishing this letter, I wrote a similar letter to another Blog based out of Philadelphia, and my comments were denied. I brought light that Anthropologie’s new concept store based out an old and established botanical nursery- the company then ousted and let go 25 yr veteran contributors to the horticultural majesty they had created… and I guess the blog owner was too scared of retribution because she also currently designs a stationary line that anthropolgie bought. anyhoo.

At Williams Sonoma I had to destroy a lot less, and got to donate a lot more- even food stuffs. WS also regularly congratulates great performance with hefty gift certificates and prizes from their vendors. my kitchen is beautiful and well stocked from my time there. It was a decent, morally thoguhtful, and rewarding experience working there.

Unlike anthropologie that would only give us measly $5 “anthro bucks” to reward one or two associates every 6 months. what are you going to buy at Anthro for $5??? Retail is a business that I don’t miss, but UO/Anthro had the highest turnover I have ever seen, no loyalty, no corporate culture and that includes corporate offices and higher up designer/buyer/production jobs. I have had friends at every level of the company.

*sigh* it’s a shame that they don’t include more inclusive brand ownership into their company from top to bottom, because its a sad sad place to work and has soured the company from me forever. though i still walk in and look at their seasonal displays in awe, i know what lies behind the curtain.

And here’s my opinion:
I’ve never purchased a thing from Anthro. I believe they are overpriced for the mediocre shit they sell which all seems to be rip offs of vintage or better quality items. I personally would rather have the original vintage piece than a “new” knockoff.

As far as the environment is concerned {and most of you may know this is something I am passionate about} they get an F. Talk about waste.

This is a hard one because I know Anthro is a popular store …but what are your thoughts?

Melts All Your Memories & Change to Gold

What I’m Wearing… * Vintage dress * Vintage coat (made by my grandma) * Fishnet stockings by Commando * Sunglasses by 3.1 Phillip Lim…