And you know what? It kind of worked. 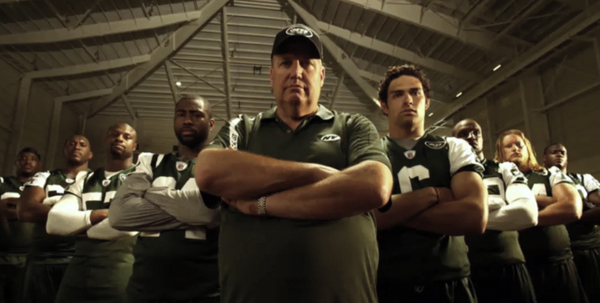 The reason I enjoy basketball so much is because you really get to be up close and personal with the players. The game is fast and the cameras are court side filming every drop of sweat in HD. I get to know who is on each team pretty quickly which gives me more of an interest in the game itself.

In football, the field is larger, the action further away and the players all covered up in helmets. I only know a handful of football players which means, half the time when I’m watching, I have zero interest in what’s going on. On top of that, LA doesn’t have a football team to root for so I don’t have a sort of built-in love like I do with the Lakers.

When the husband told me about HBO’s Hard Knocks I thought, okay, another “man” show I can fall asleep to at night while he plays with my hair. But after the first episode, I was sort of sold. It gave me an inside, up close and personal look at a team, this time, the NY Jets. I got to know the coaches and players and what exactly “special teams” is and it just took it to the next level for me. I feel like I have a team now, even though the husband says they’re gonna suck, I’m interested in when they are playing {Monday is their first game}. I imagine if HBO did this for every team, I would really begin to enjoy football season.

But I think what I learned most is that Mark Sanchez is REALLY cute.

top photo via: The Jets Kvetch