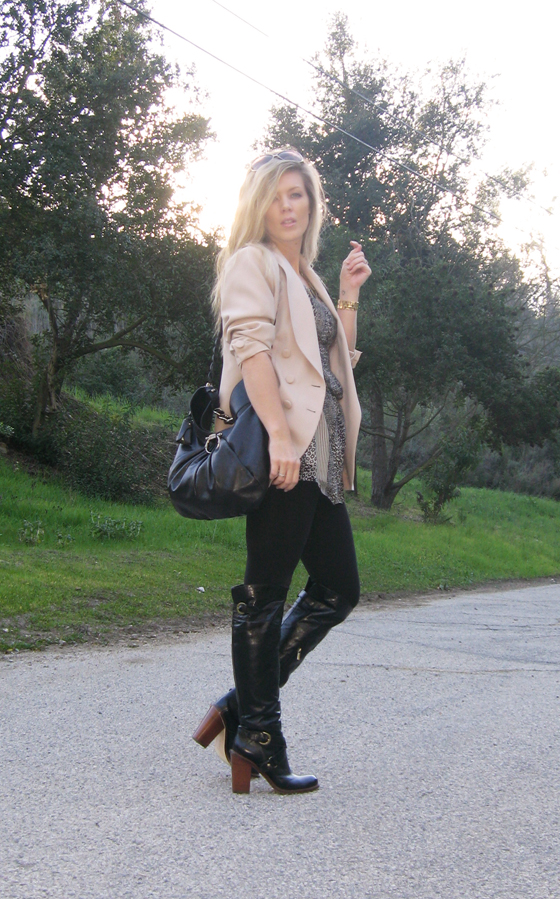 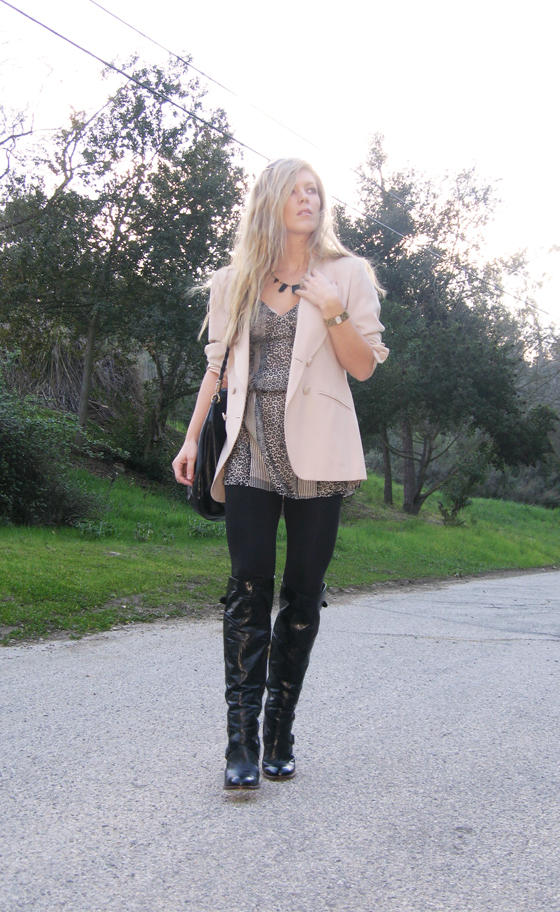 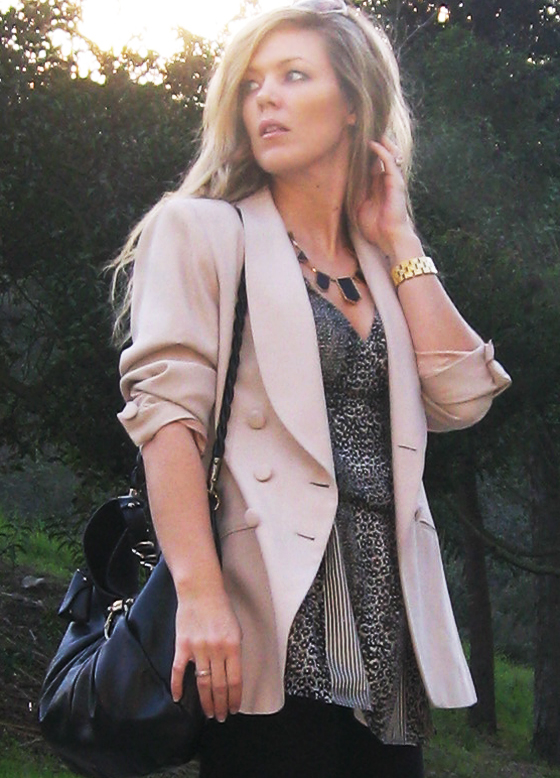 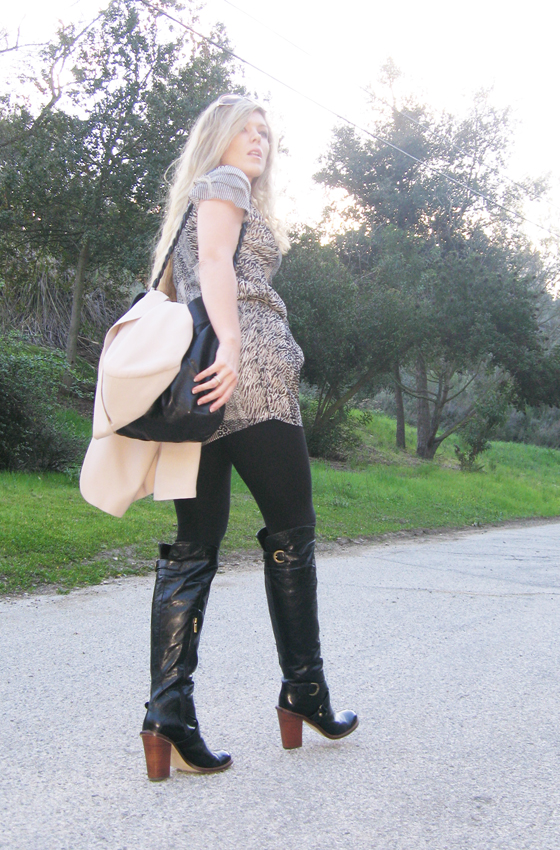 What I’m Wearing
* Walter dress I just scored from Gilt/Fuse …the print on this dress reminds me so so much of the 90’s …and I love the shoulder details. I belted it with my favorite vintage skinny stretch belt.
* Vintage soft light beige blazer -tag: Kasper for ASL …last seen here …BEST seen here
* Forever 21 black cotton leggings
* House of Harlow 1960 black leather and gold necklace …last seen here …originally purchased last summer from Bloomingdales.com but now Amazon has it …I heart amazon. they seriously have everything. Did I mention I did 97% of my Christmas shopping on amazon.com? I only went to two actual shops by foot. rad, I know.
* Boutique 9 Charissa Over The Knee Boot -black

…these may just be my new favorites. I love the chunky wood heel and buckles which remind me equally of the 70’s and of Chloe, and I love that they cut my knee off instead of being completely over the knee and thigh high. They are perfect. If I wasn’t saving my husband’s hard earned $$ I’d get them in every color. {although they photograph much shinier than they are in reality ..all black leather does actually, and I don’t like it at all really}
* Tom Ford sunglasses …did I mention I finally got the ones I’ve been dying for and I don’t like them at all? I twittered it. I’m so sad because I was so in love with them …they just don’t look the way I want them to look …the search goes on.
* Ferragamo hobo
* Hair: slept in a French braid …took out with fingers/did not brush 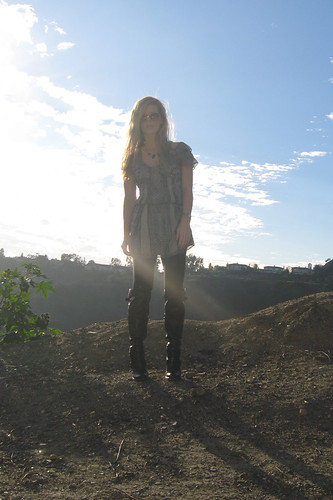 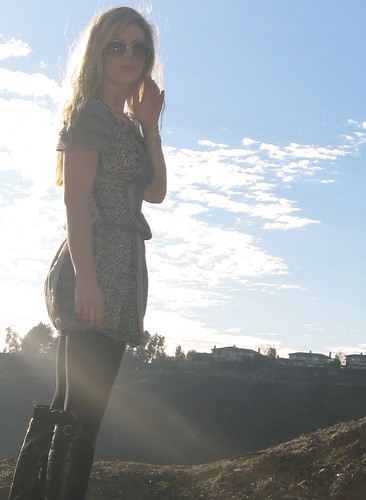 The problem with finding great lighting and great locations to shoot my outfit shots is I end up liking too many of them because of the scenery and colors …however, I look pissed off or scared in almost every shot. I wasn’t either so I’m perplexed, literally. My first location was maybe my favorite. 1. Because it was new, 2. Because I was in love with the light. But immediately after setting my camera up on my car, a car pulled into the very next driveway and I didn’t really want an audience, so this was the one and only shot I got …walking back towards my car after spying them. That may have been the culprit for the bitchy looks in the next location …which actually had different but nice lighting as well.

The last local was near the top of Benedict Canyon …you’ve seen it before here and here. I always love how the sun reflects here in the late afternoon. It’s so magical. 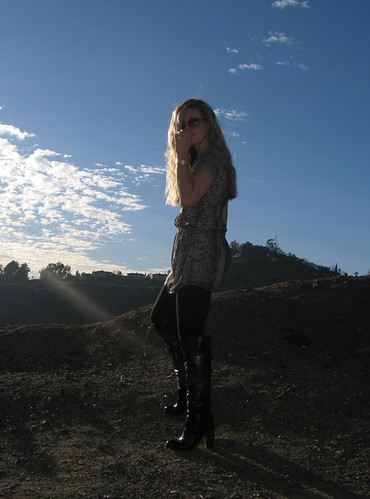 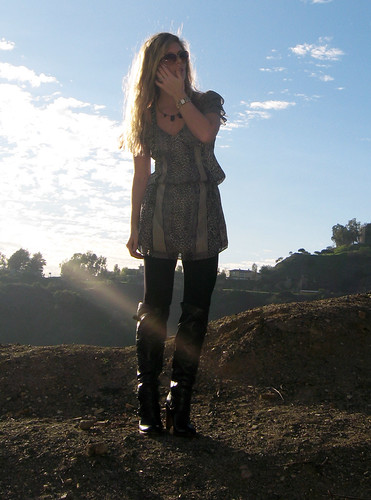 so, apologies for the photo overload. LA was so pretty yesterday …and you know I love these boots!

This morning upon entering our parking garage at about 8:10am, a man yelled to me “It happened again” …his window was shattered and his car was rummaged. I immediately looked at mine …no broken glass but my alarm key wasn’t unlocking my door either. It was already open. But when I opened the door, the light didn’t come on as usual so I thought someone was still in there. {yes, I go straight to horror film scenarios} I left my bag on the seat and walked around and as I walked up my passenger side, I noticed my husband’s brand new-yet-to-have-plates-2010 Prius passenger window smashed. Glass all over. Ugh.

After running back upstairs and into the house, notifying husband, I got in my car and realized it had be rummaged as well. The reason they didn’t break the glass is because thanks to a faulty trunk/hatch/whatever which gets stuck without my realization leaving my car unlocked/unarmed of which I was unaware. They just opened the door. Items stolen: two pairs of Chanel sunglasses, silver Ray ban aviators, ipod cord {I never leave the ipod} and my work gate/key/opener. The only thing they took from my husband’s car, after causing $550 worth of damage were his shop keys …and my spare car key. Awesome.

1. They are clearly idiots. They had my car key in their possession and they left my car. 2. At least they didn’t steal my car 3. They could come back and take it tonight. 4. WTF?!?!?!? 5. We are 2 WEEKS FROM MOVING. 6. Anger. 7. Our move to the new house has just been scheduled for this weekend instead of next. 8. Hopefully. 9. LA was so pretty yesterday and now I just hate it again. 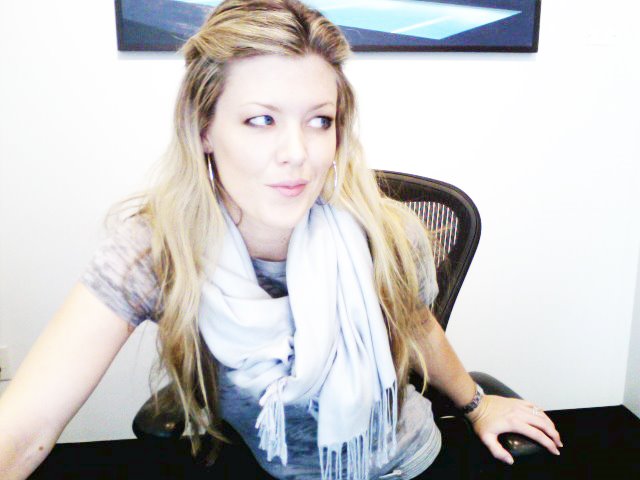 Stripes & Dots | With or Without You

my style Spring 2010 outfits what to wear now