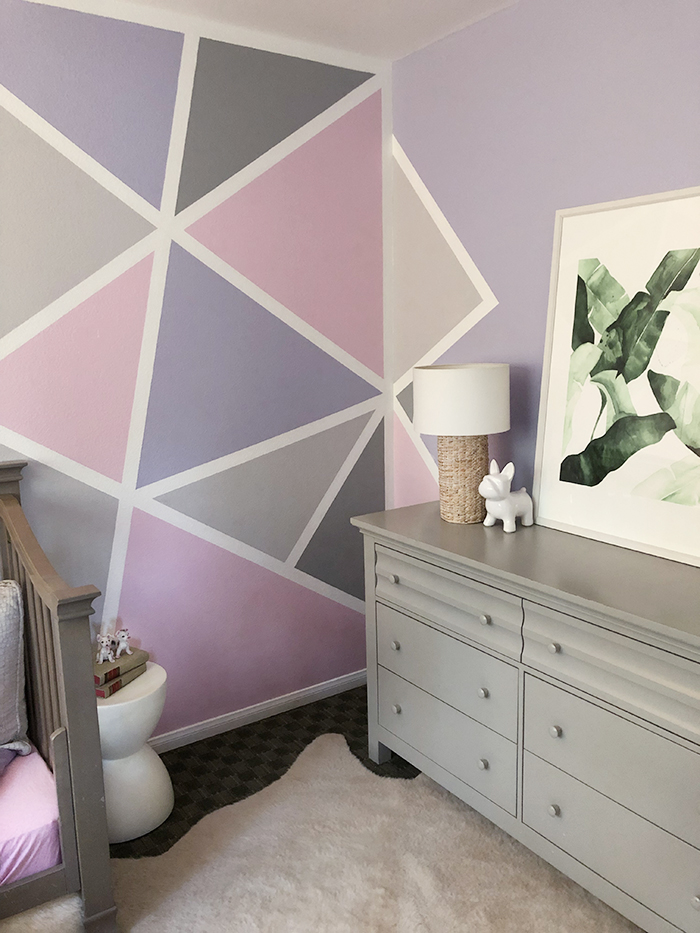 Now that I’m almost totally completely settled into the new house, I thought I’d begin sharing little bits of it with you… or probably, eventually, the entire thing – obviously 😉

It’s funny how much I love this house, though I’m not totally familiar with all the creaks yet and the wood flooring makes them even more pronounced. The energy is amazing here, especially in the daytime, and at night the shadows and lighting make it look so pretty BUT I have gotten creeped out a few times late at night due to aforementioned creaks and said wood flooring. But I love it…

…and as you may or may not know, I’m also sharing this home with two beautiful little girls (part time) and since their room was the first we finished and also the only one I’ve actually photographed so far, I thought I’d share it first.

There are two rooms upstairs and both have their own bathrooms, which is pretty great actually. We chose this particular room for the girls because it has a bathtub in the bathroom, gets great light, is at the top of the stairs, and just felt right.

We wanted to do something a little special for them and were both thinking geometrically, so I pulled up my Pinterest “Kids” board and was immediately drawn to this fun geometric wall and we both agreed to go in that direction.

We took the girls with us to Home Depot to choose paint colors and they wanted pink, purple and grey. We actually only grabbed the pink and purple but luckily had two other grey tones; one from my closet, (which you can see in my New House highlights on Instagram) and the other from the master bedroom accent walls (also in my stories), so it worked out perfectly. I also saved the paint swatches to be able to add them here, but they got lost in the move somewhere. Although, now that I think about it, the paint cans are probably buried in the garage somewhere. Once I find them, I’ll add the colors to update this post.

I found the paint cans! The paint brand we used was Behr in Eggshell, and the colors are as follows…

White is Behr paint and primer in one, premium plus

ALSO NOTE that that lightest grey COULD BE Silver City by Dunn Edwards that I used for my new closet and my old office… which means that the darkest grey in the geo wall is Sparrow and NOT Anonymous, which we used for the new master bedroom and guest bathroom, and may have felt too dark for this space. I’m sorry, I can’t remember, lol… just go with a light grey and a dark grey and you’ll be good to go!

So the room was basically all painted white, which made it a great blank slate. I thought leaving the white lines in between would be the best option because it would tie in the window frame as well as all the baseboards and doors… plus, it was one less wall to pre-paint. 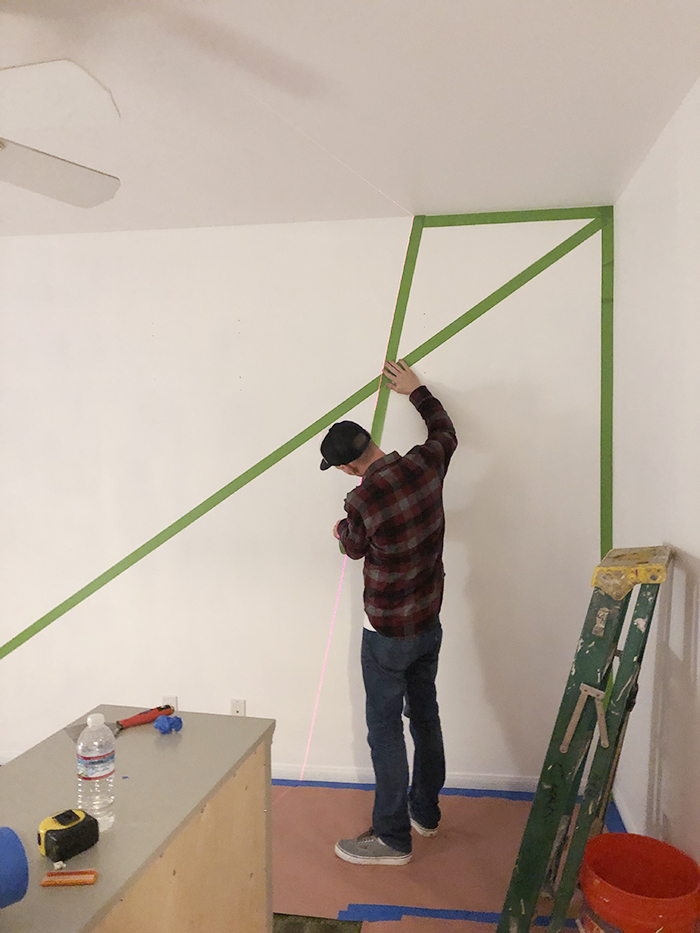 We used the green Frog tape because supposedly when moisture hits it, it seals and won’t allow for too much bleeding. However, we (and by we I mean HE 🙂 spent a good two hours touching up the white lines by-hand after we pulled the tape off. 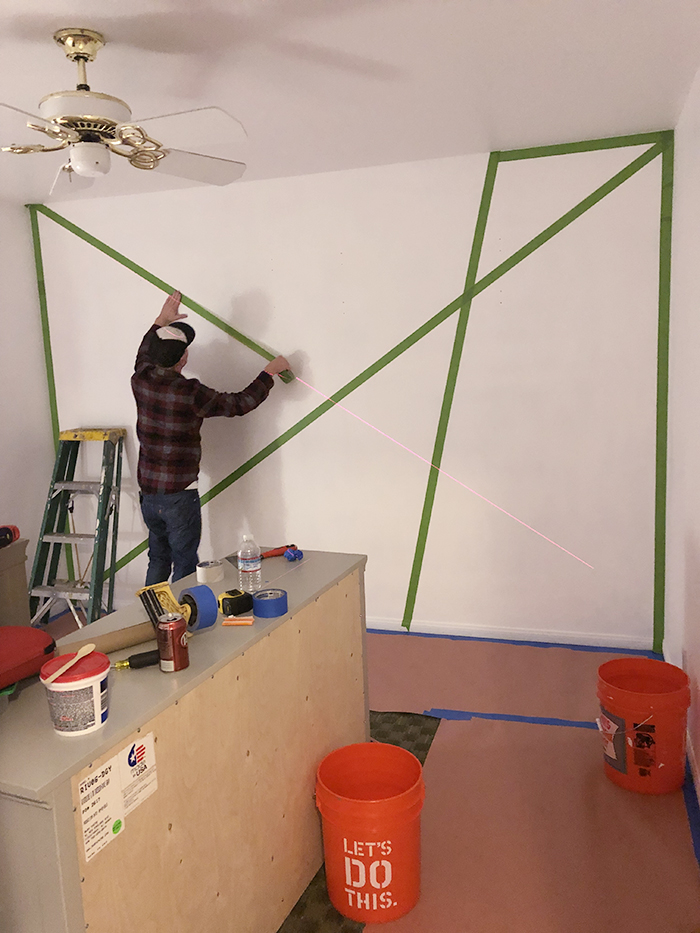 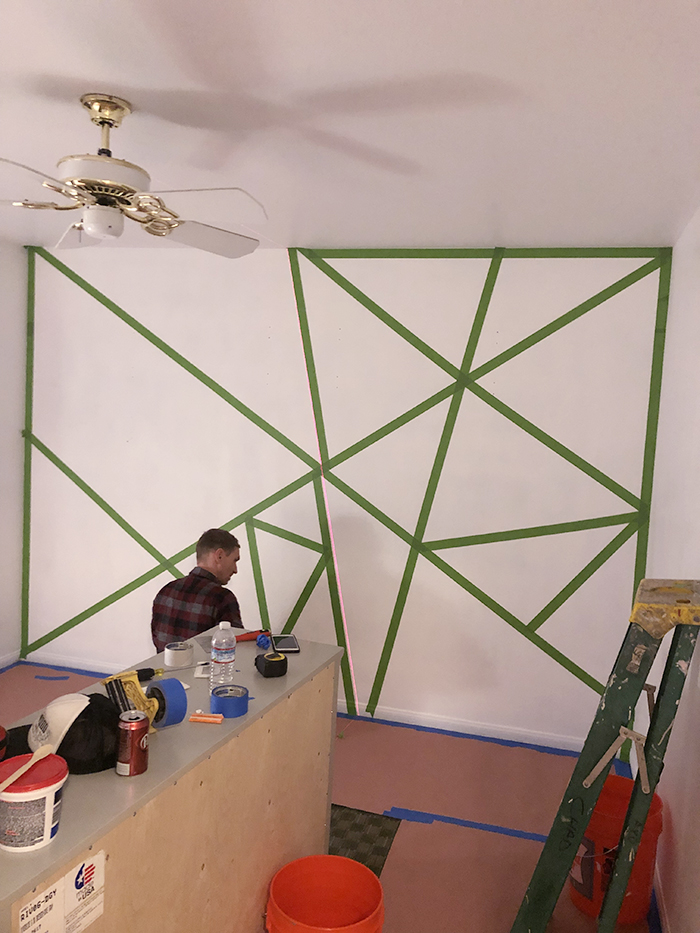 Also, he’s even more of a perfectionist than I am (and a pro at this stuff). He used a laser level to get perfect lines and I would have just eye-balled it. I only say it because either way, the tape lays straight enough without needing the level, but if it helps to get started to know where you’re going to tape off, then go for it.

He started taping along the side walls and ceiling to sort of box it out, which I wouldn’t have thought of and I love it. I wanted to make sure we took some of the design over the edges and onto the other two walls, so this added a cute touch and made it a little easier to paint each section without worrying about taping up the side walls. 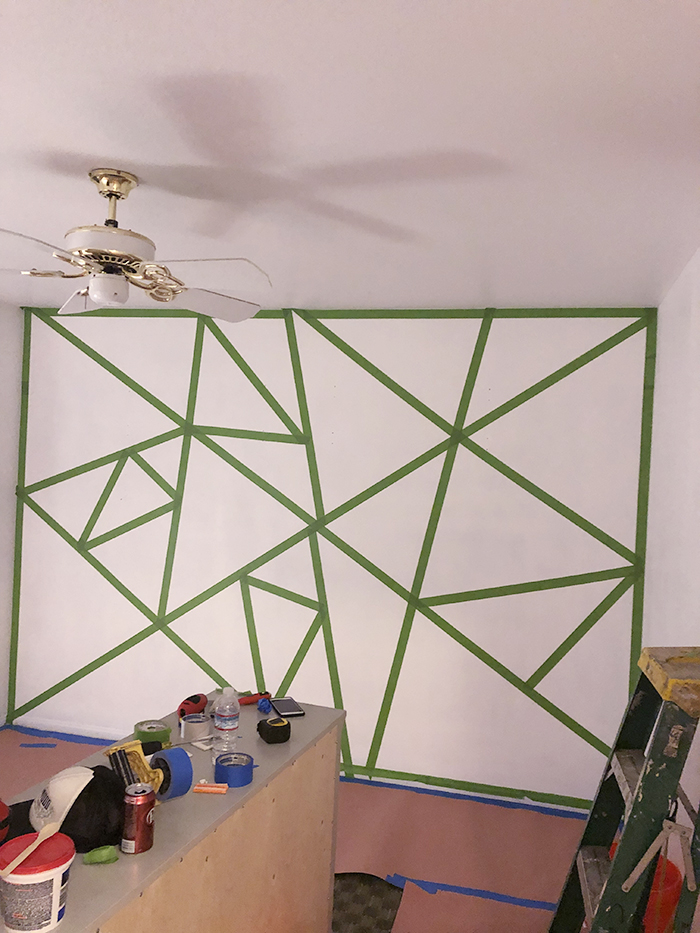 We then started with big sections to create a framework to create smaller triangles off of… and just continued creating shapes until we liked the result. I didn’t want it to look too perfect, so creating a fun mix of different shapes and sizes was what made the wall stand out (I think anyway). 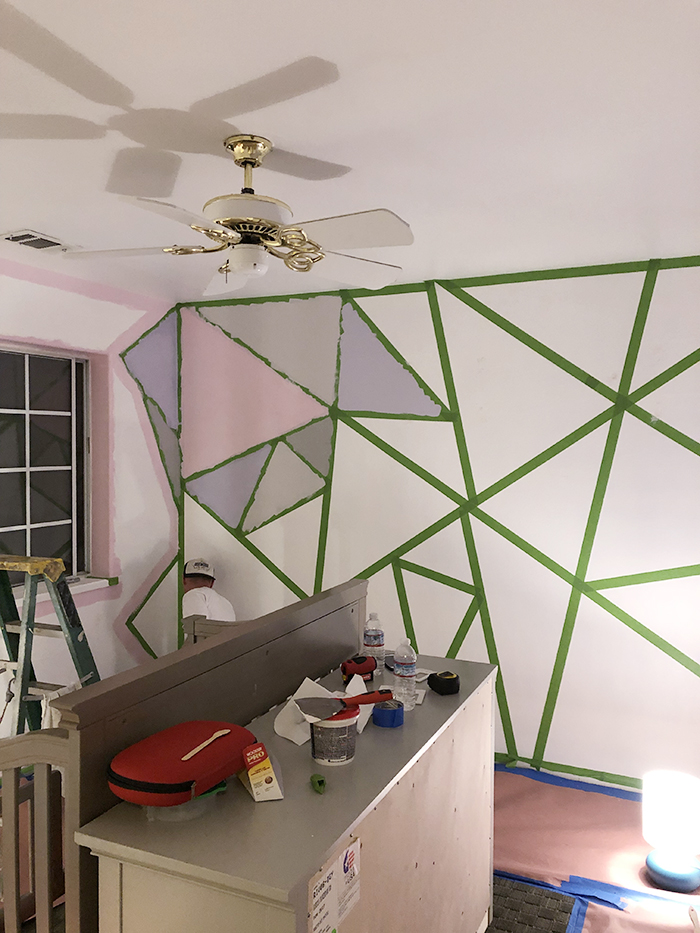 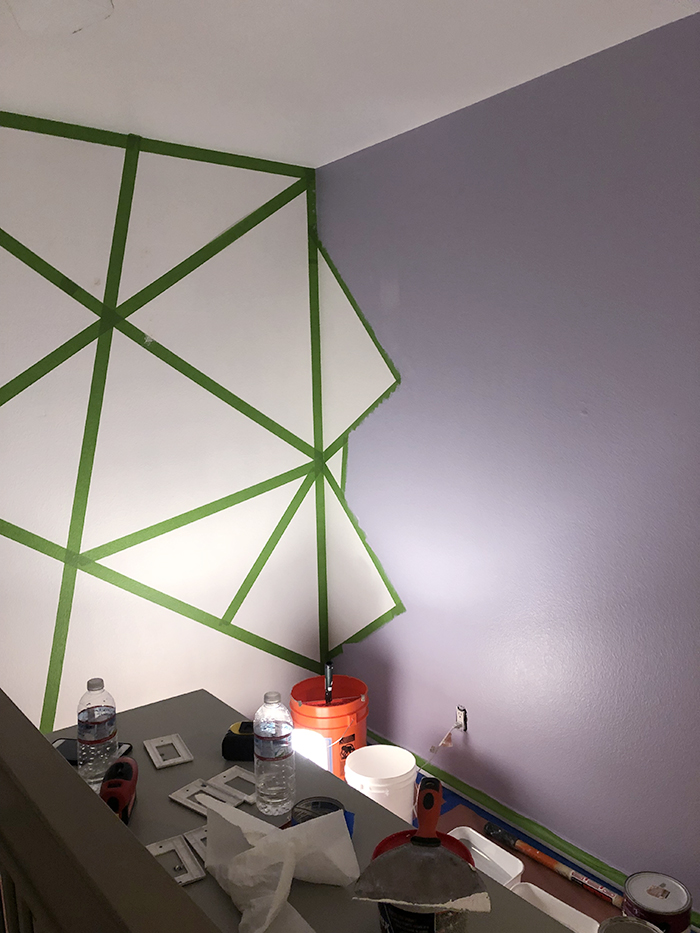 We took the design onto each side wall and taped that off as well and decided to paint one wall pink and one wall lavender and the opposite wall grey. Though in the end, we left the far wall white because it felt brighter than the grey options we had.

So he painted the large walls and I started on the multicolored triangles. Then he helped me finish the triangles and added a second coat to all of them. 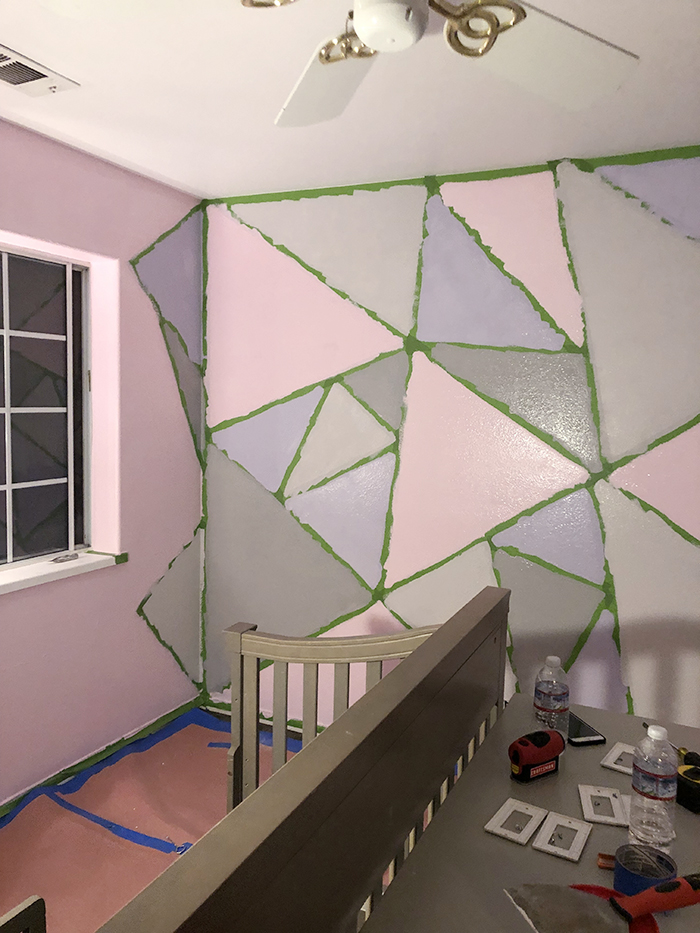 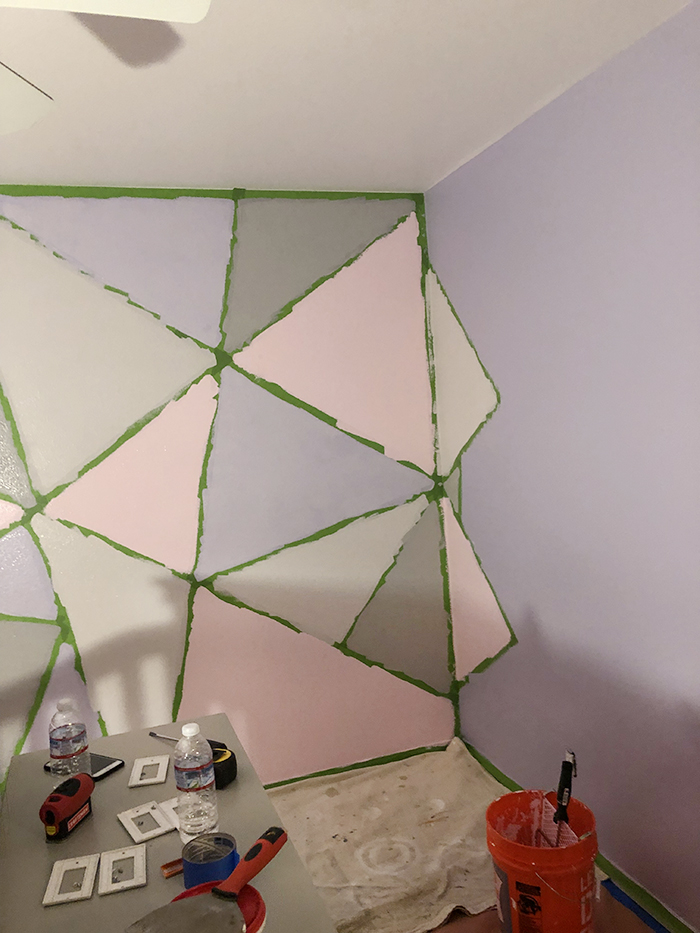 Deciding which color should go where is the toughest part because I wanted to make sure that none of the colors touched each other AND that there was an even amount of each of the colors to make it visually pleasing. We (obviously) used the same pink and lavender we painted on the side walls and two grey tones. It was important to have 4 colors to create this look.

Once I got started though, it was just like fitting puzzle pieces together. 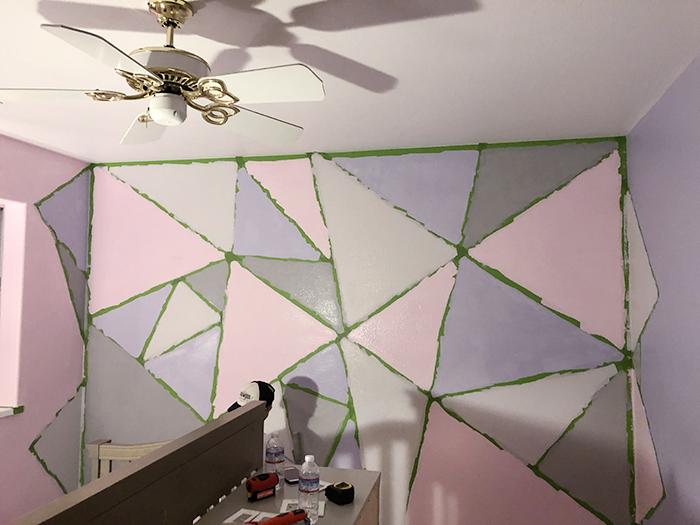 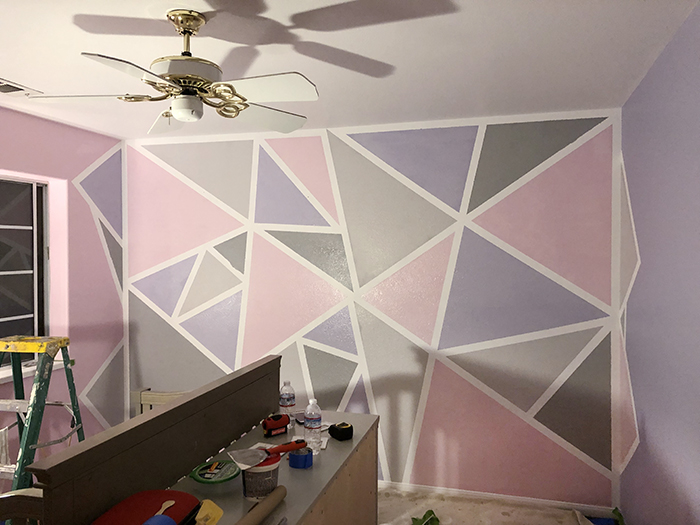 Since the paint is wet in the photos it looks high gloss, but it’s not. We bought matte paint, which you’ll see in the finished photos came out perfectly. 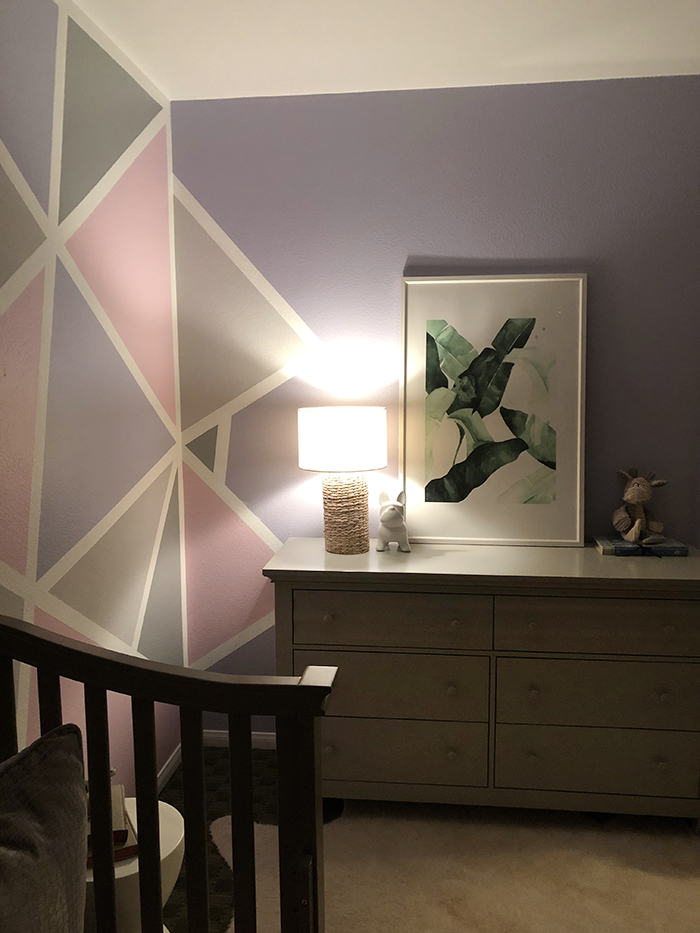 The cute grey furniture was theirs from infancy and their beds were converted from their cribs. This summer they’re turning 8 and 6 so they’re just about to outgrow the beds actually and we’re thinking about bunk beds to free up a little more floor space so they have more room to play. But for now, we created a cute and cozy corner with their beds that almost feels like a sectional couch situation.

I styled and shot these with items I already had and before we had their doll houses in and flatscreen on the wall as well, so it’s changed a little bit since then, but you get the idea 🙂

We love how it turned out and most importantly, the girls love it too! 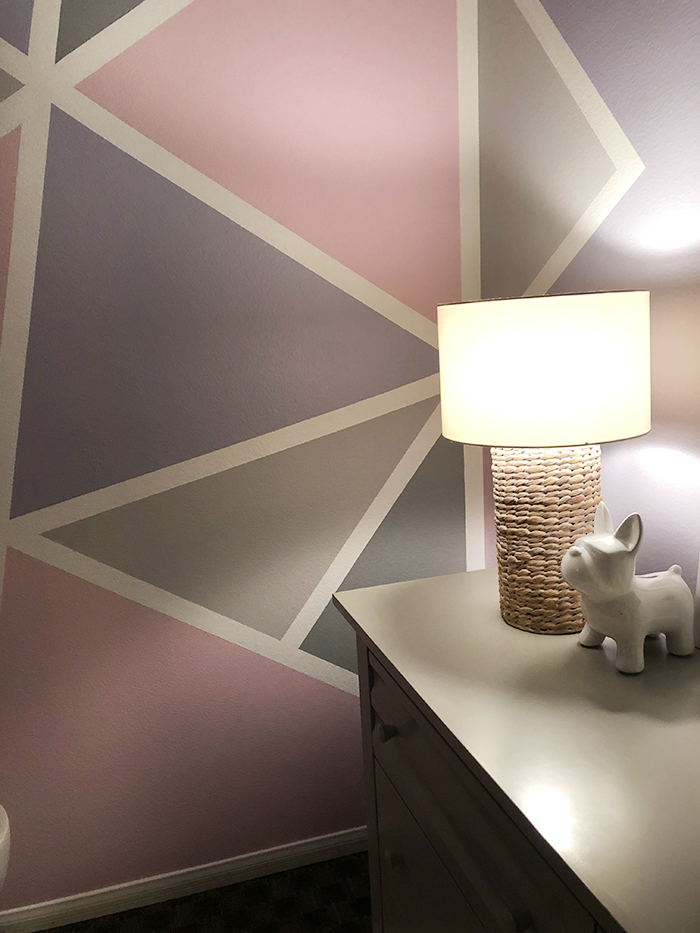 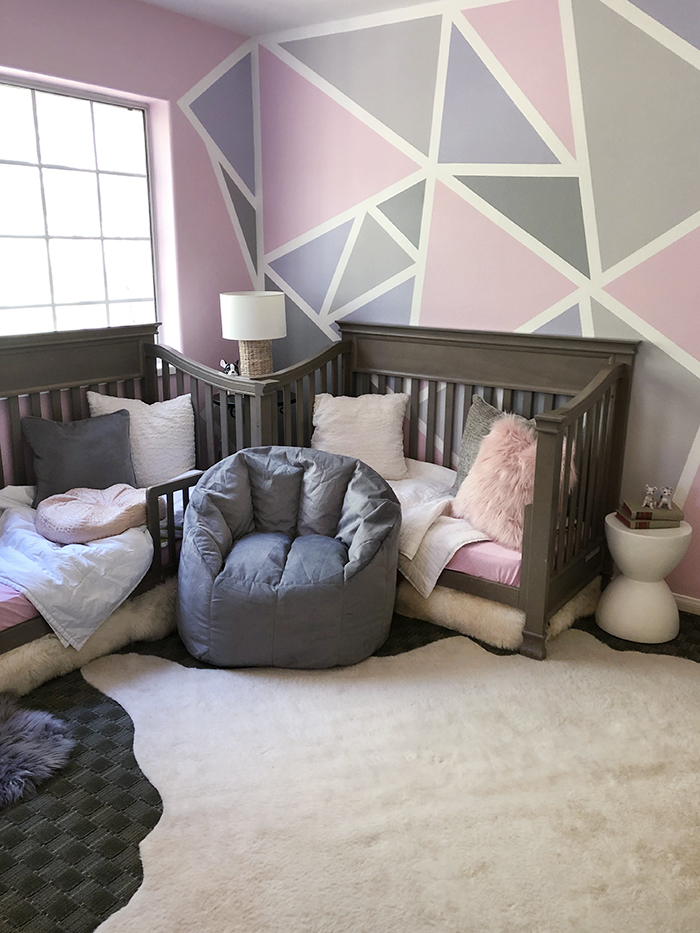 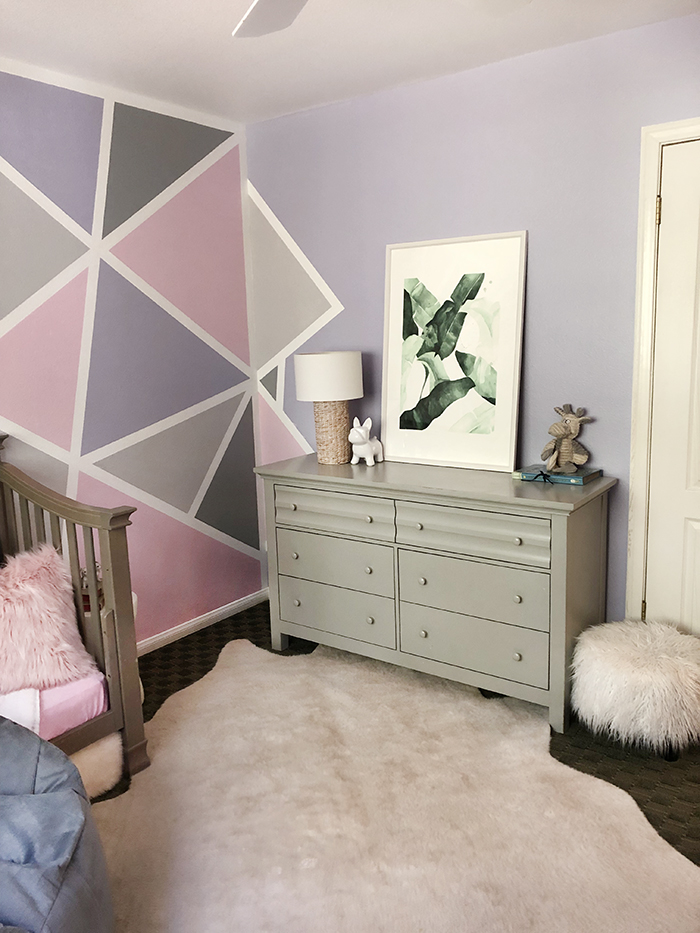 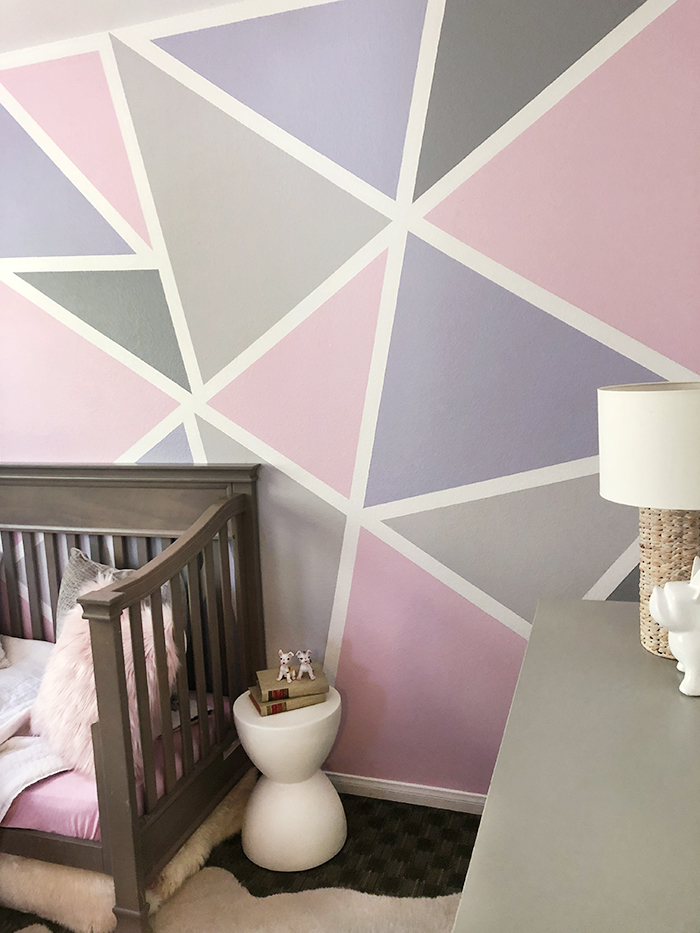 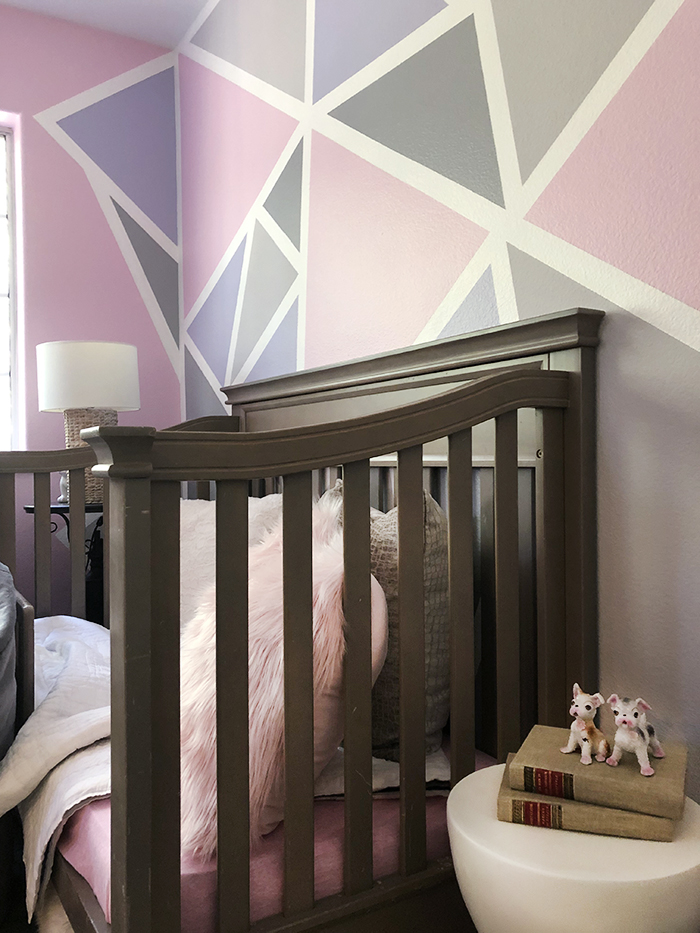 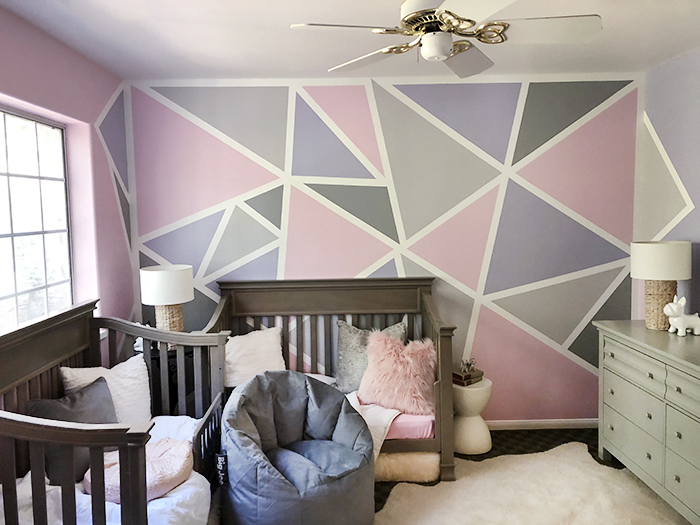 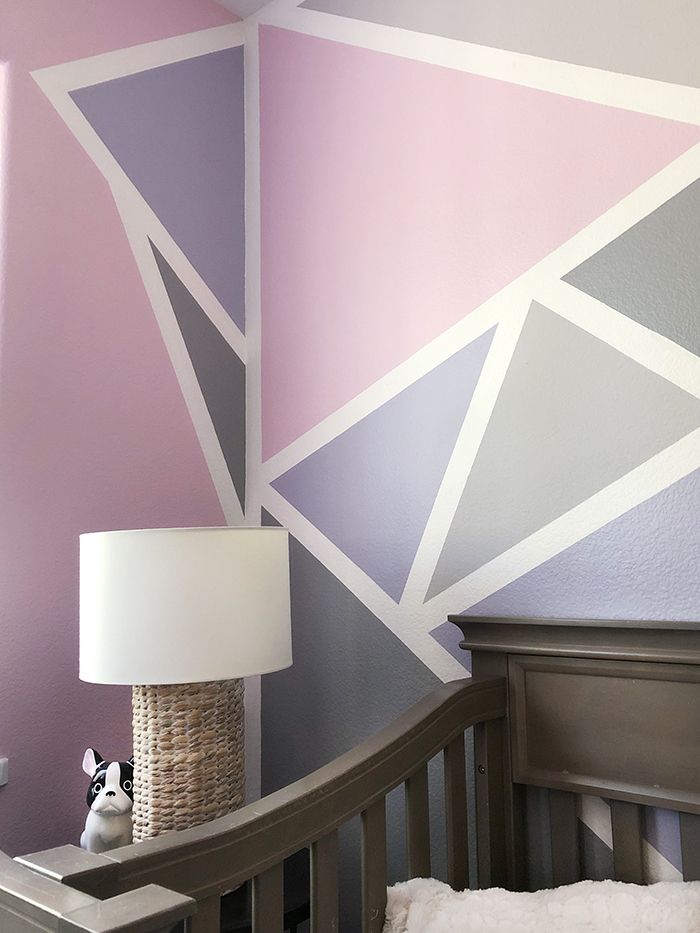 Notice the Frenchie figurines? 🙂 I mean, how could I NOT?!?!

Shop the items (or similar items) below…

Lovecats! Sorry I’ve been MIA! I’m on a Mission! I have FINALLY tackled the “getting rid of the ex-husband’s stuff” portion of my life…