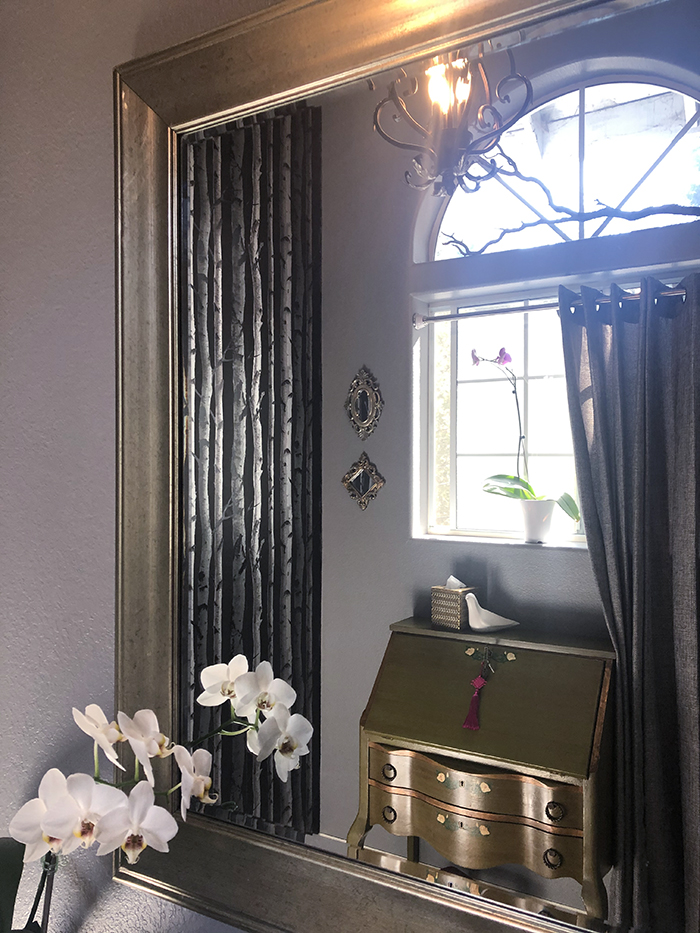 I feel like I’ve been stringing you guys along with this final bathroom reveal (I mean, for those of you who care lol), but I promise I’m not! I blame the quarantine that has me motivated and inspired and feeling great one day followed by two days of complete lack of motivation, anxiety and mini breakdowns which I can mostly attribute to lack of sleep but also, to the overall uncertainty and fear and slight depression that washes over me that many of you might be feeling as well due to the Coronavirus quarantine. This is just to say, you are not alone, we are all in this ridiculousness together, but apart, feeling much of the same scattered and shifting emotions, regardless of how things might look.

But I’ll move on to say that I finally finished editing the photos for our guest bathroom makeover late last night and can share them here with you now… and there will most likely be far too many photos, but I suppose it’s better than not enough, right? Right. 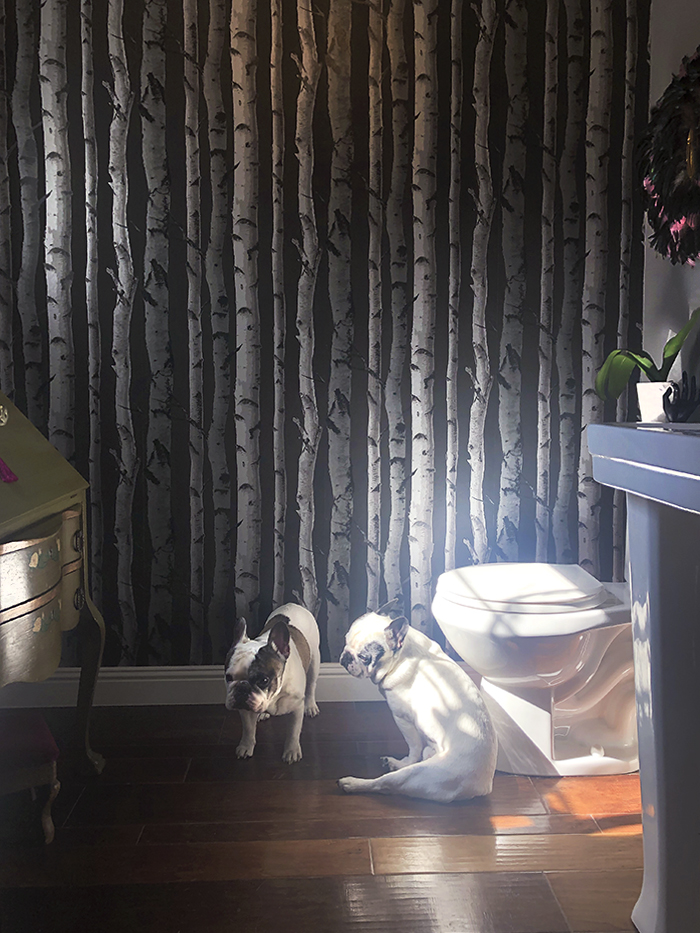 When we moved into this house last June we painted three of the walls in this bathroom the same dark grey we painted the master bedroom walls and also one of the colors we used on geometric accent wall in the girls’ room, knowing we would use this dark birch tree-lined wallpaper on the 4th wall because well, why not? And for the last 9 months, we lived with it this way, partially painted and halfway done.

As I mentioned in one of my previous guest bathroom posts, Wallpaper Direct sent me this wallpaper back in 2017 to use in the Dogwood Tavern restrooms. When we realized it wasn’t going to work and meet the health code standards, we had to kick the idea to the curb and it’s been sitting around waiting to be used ever since. I was hoping to use it in my last house, but you know how that went, so, here we are… finally using the wallpaper in this house, which is really perfect for it actually. 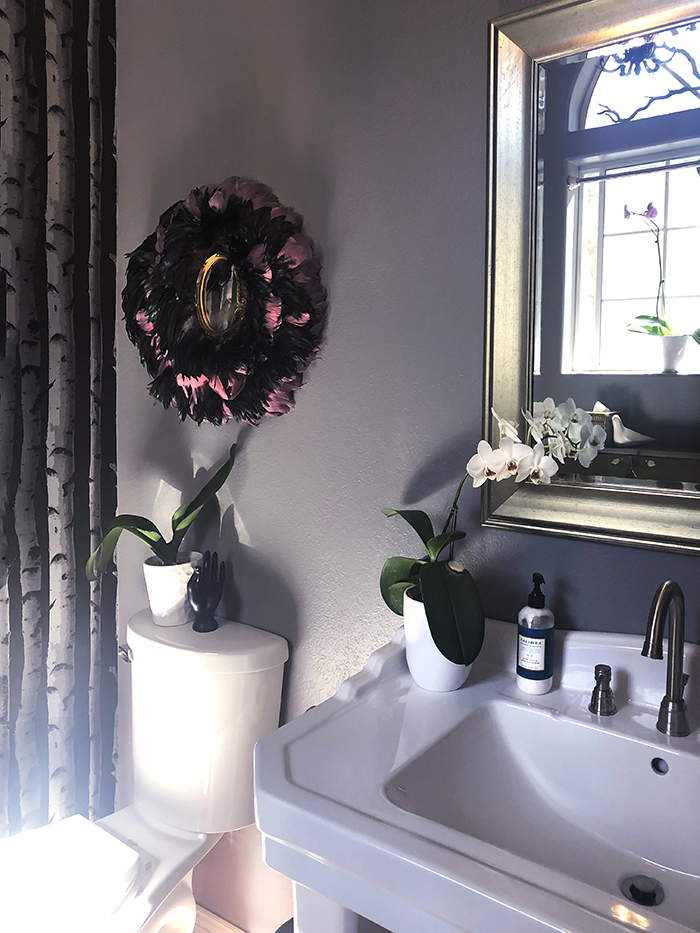 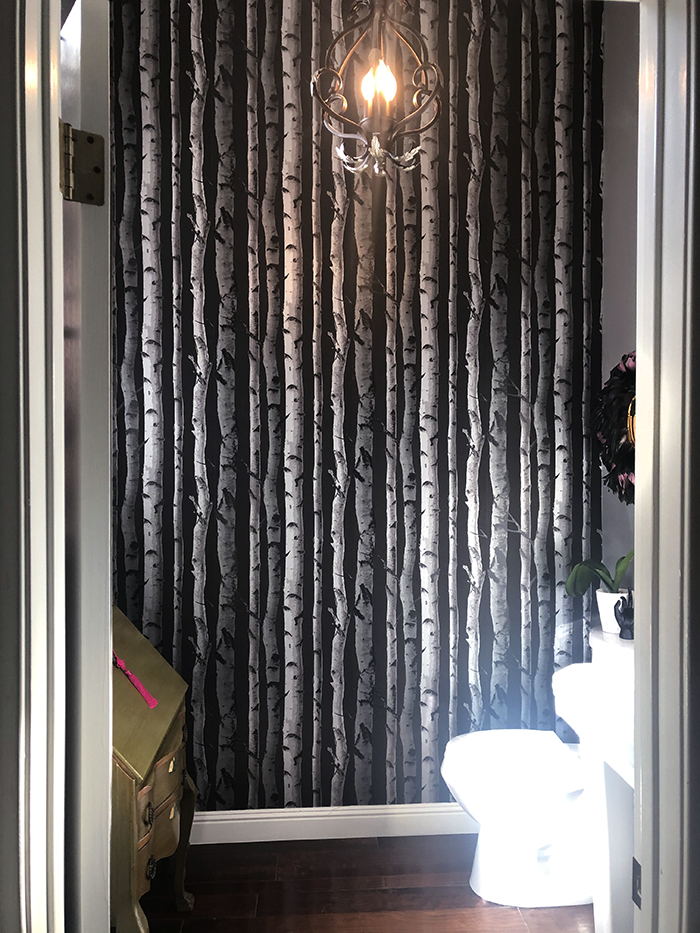 I love how big this bathroom is… in fact, it’s probably too big for a random guest bathroom that doesn’t also consist of any built-in cabinetry or closets, but the space is really cool and the ceilings are really high and the large window and arched window above let in really cool light throughout the day (that you can see in the photos) which also slightly changes the colors of the space. Just to note, the wallpaper is an almost black background with grey and metallic silver birch trees and the other three walls are painted in a dark charcoal grey. I never remember the paint name or colors and I’m sorry for that, but I tend to always lean towards a cooler grey (blue tones) vs a warmer grey (yellow tones), but that’s just a preference. The wallpaper is called Nordik Wood and I think is only available in the lighter shade now, unfortunately, but it’s still cute. West Elm has it in peel and stick option, which would have been so much easier to install than ours, considering we also hung lining paper to smooth out the wall first. (see the before photos here)

What I also love is that this bathroom is at the end of a very short hallway off the entryway and dining room where there is only a closet and stairway (up to the second floor) in between, but every time you walk by the area you can see the trees as you pass, which makes me smile and is why I ultimately did not want to mount the toilet paper holder on the same wall where it originally was. Instead I opted to hang it in between the sink and the toilet and even though it’s a bit of a reach, I’m happy with the way it looks. I also thought a free-standing version would maybe be the best bet but I didn’t want to have to order one online and wait for it and we already had this one that matched the towel holder and so there you have it. 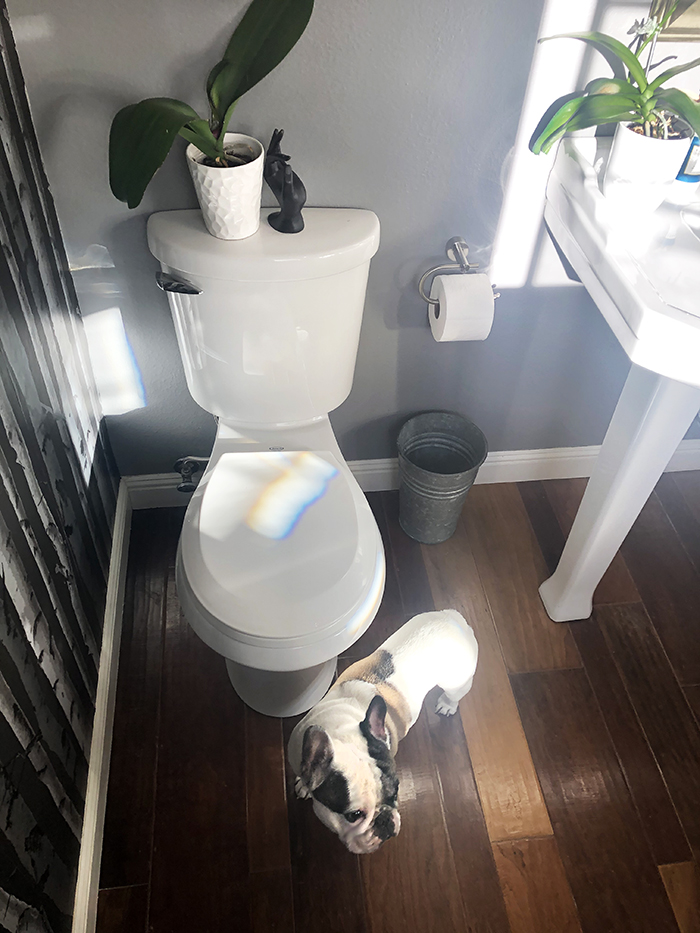 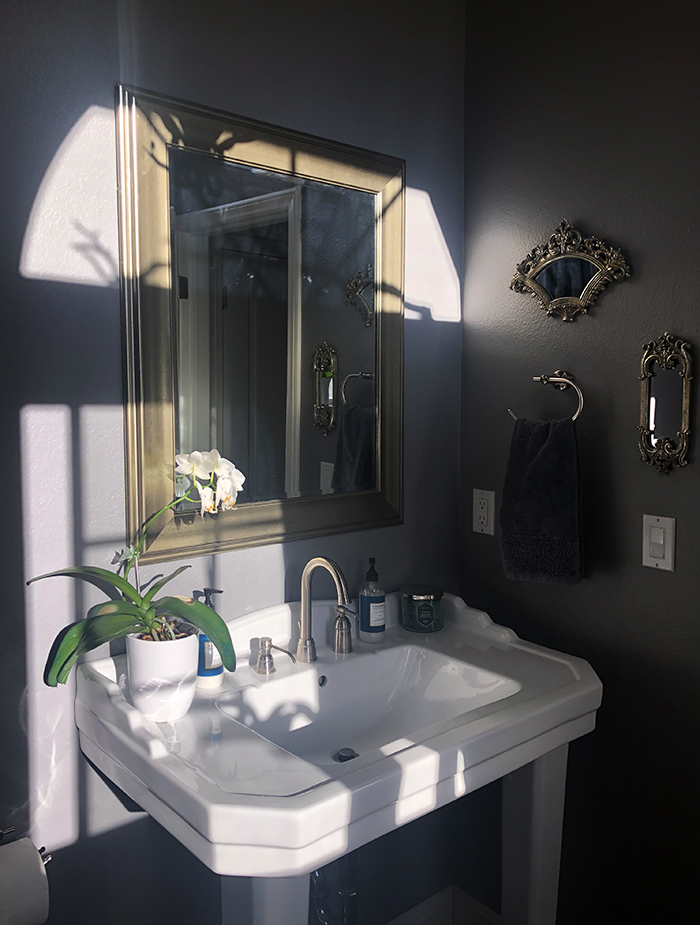 This bathroom has an abnormally large and partially free-standing white porcelain sink and metallic framed mirror hung above and also included the towel and toilet paper holders and of course, the toilet… oh and the light fixture (which is maybe not my first choice, but works just fine), everything a 3/4 guest bathroom needs really, in a space that is three times the size it needed to be and because of that, I thought my grandma’s antique desk (painted in the ’60s by my grandpa) would work perfectly in there, not only because the size was right and could store extra toilet paper and towels and more, but I liked the sort of irony and silliness of having a desk in a bathroom… because why? But also, why not? I really love the unexpected surprise/confusion that leads to thought and eventual acceptance of oddity and was going to continue filling the bathroom with more oddities and go for that full-on dark and kooky space using the items from my old long hallway.

I thought creating a gallery wall with little ornate mirrors and framed prints, the Victorian paintings of the dogs as well as vintage antlers and other funky items would be fun. But after we hung the wallpaper it didn’t seem to work as well as I wanted it to and I had to come up with something else… but also, to abide by the rule I set for myself when we moved in, I didn’t want to spend a dime decorating. 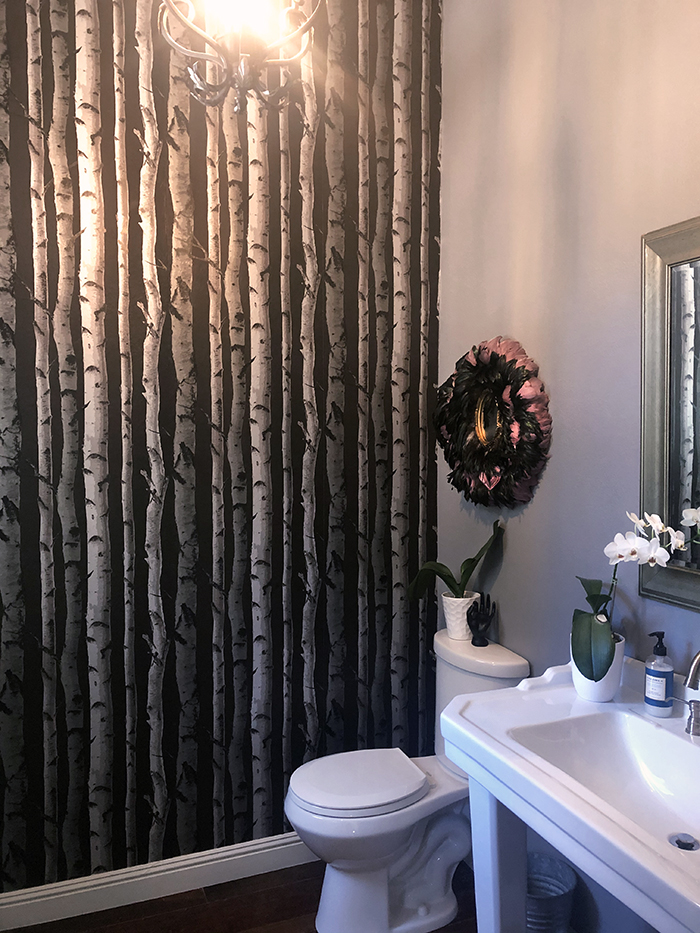 This is when I realized I wanted something round above the toilet (because anything rectangular just felt like it was competing with the mirror) and something either sculptural or textured because a flat round item wouldn’t make the cut. Then I thought of a juju hat and ran to the living room to grab my old one off the wall to see if it would work. And of course, I loved it, but the color was all wrong and I didn’t want to take it out of the living room… which is when I remembered I had the old DIY feather canopy sitting in the garage and could just make a new Juju Hat out of it, and though it was a process, that’s what I did and used a vintage mirror in the center (because I ran out of feathers) but it added the kooky touch I was looking for. 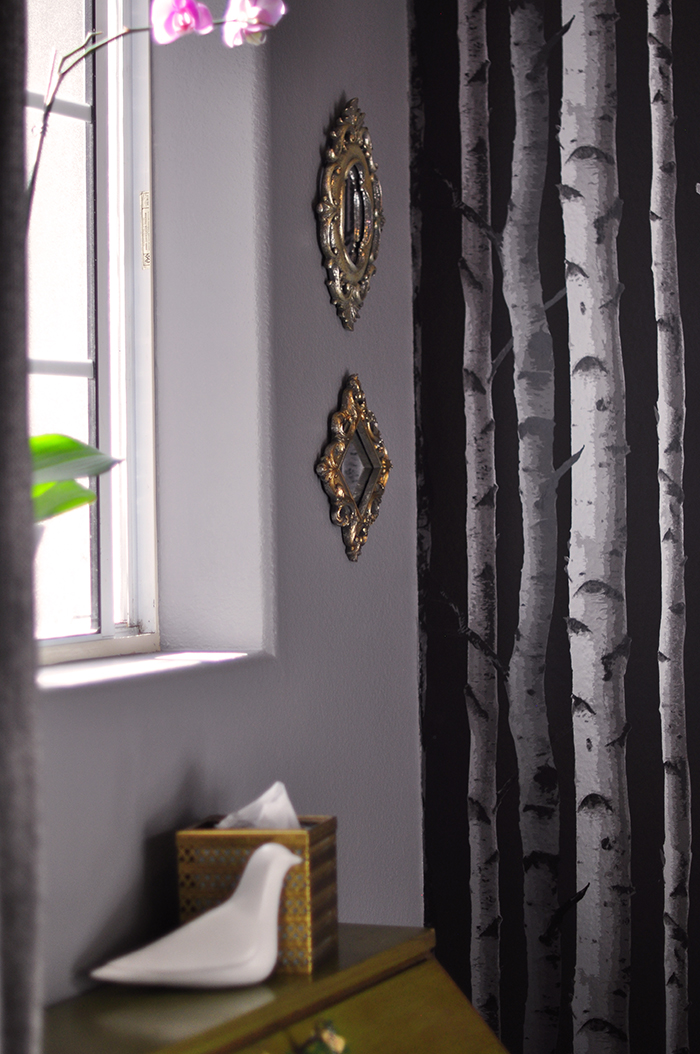 I did end up using the victorian framed ornate mirror set scattered on all the remaining walls that needed little touches. 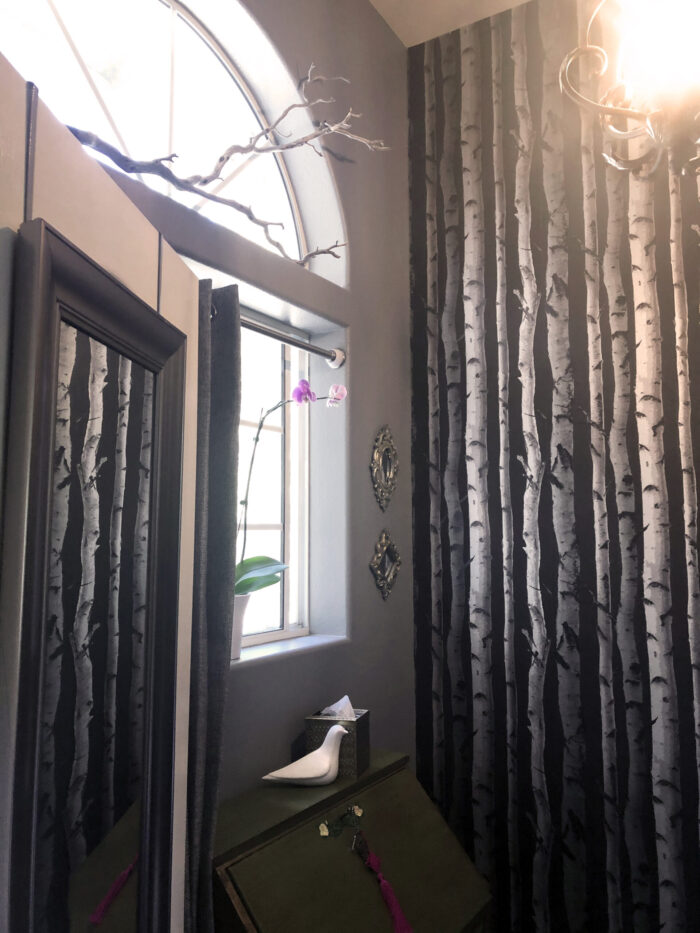 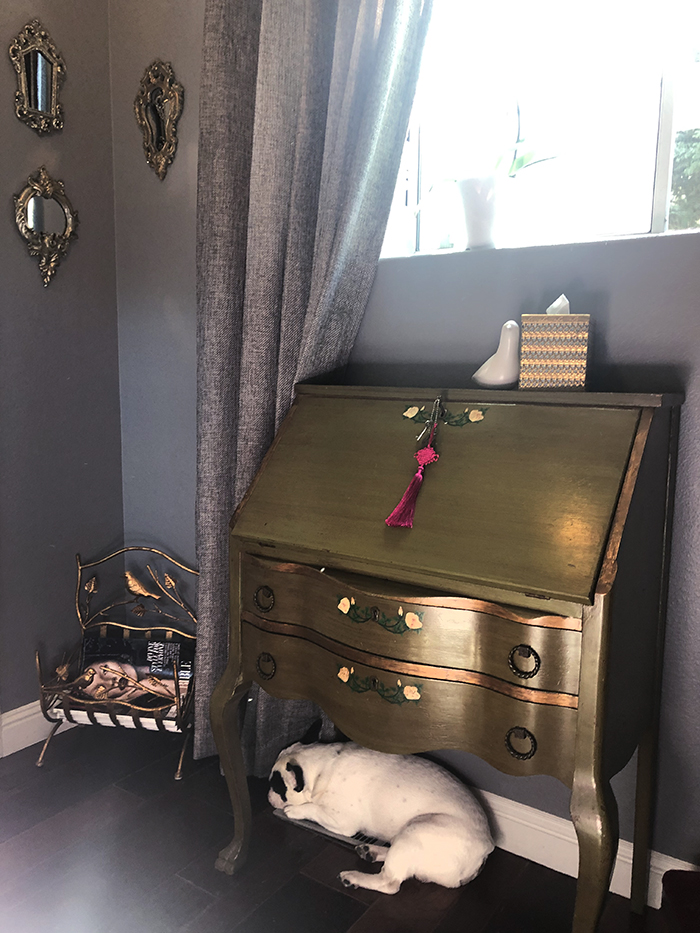 I had this existing tension curtain rod up in the window and honestly didn’t want to hang new curtain rods in here so I decided to continue using it even though the curtain I have hung on it is technically too long for the space. I actually like how it looks though… and yes, I know, since the rod is within the frame of the window, the curtains should be within the frame as well, but when I hung it, I actually liked it hanging out a little and off to the side. The length is just right, barely touching the ground and since this bathroom is actually completely private based on its location, it doesn’t actually need a window covering… however, it feels very exposed with nothing, so the curtain is more for visual and textural looks than actual function. It adds to the overall kookiness of the space I think and I love it. 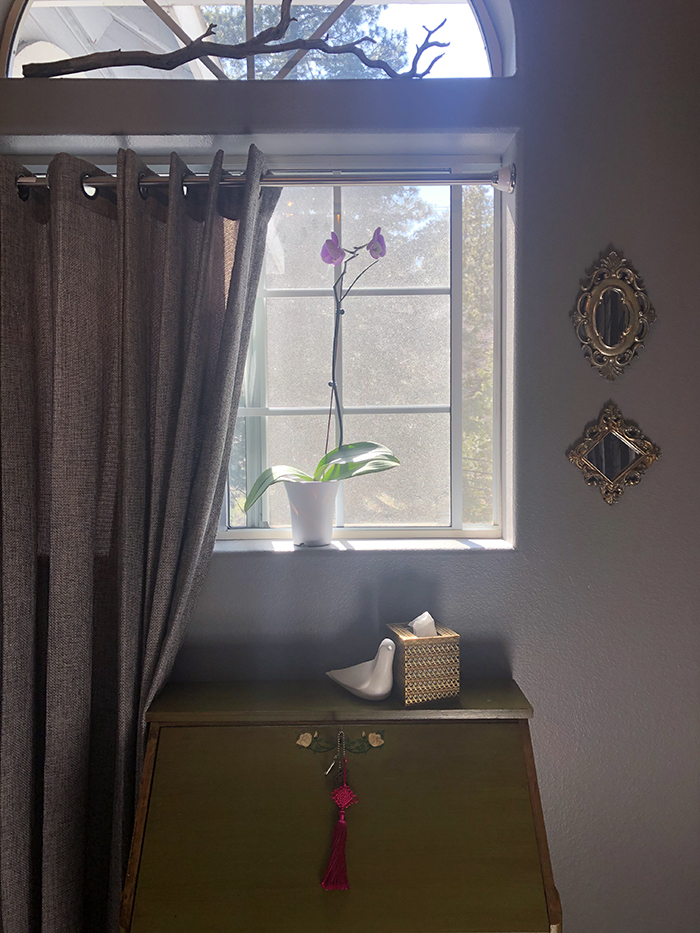 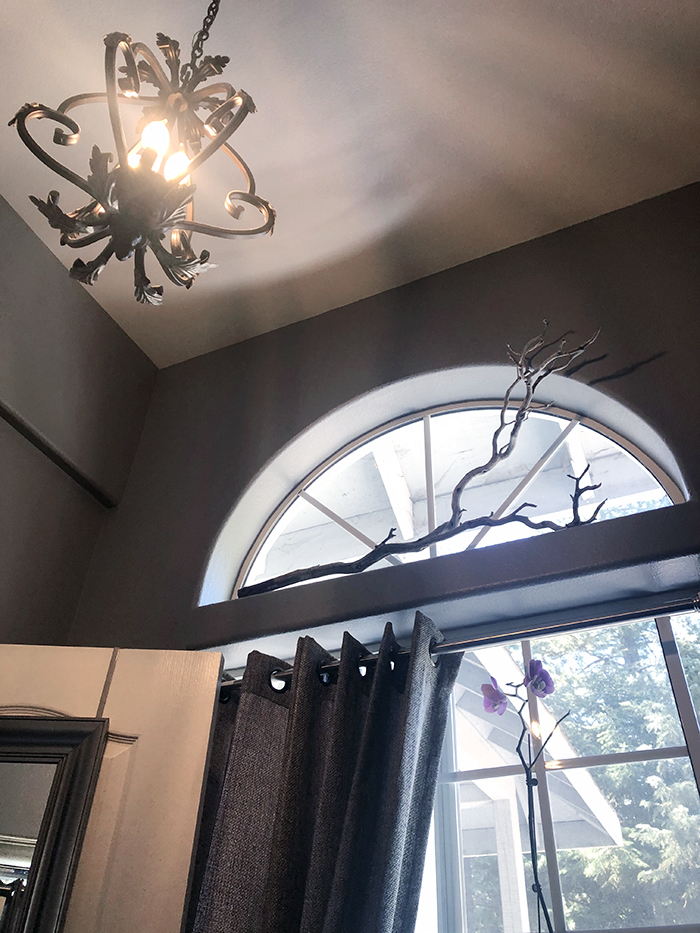 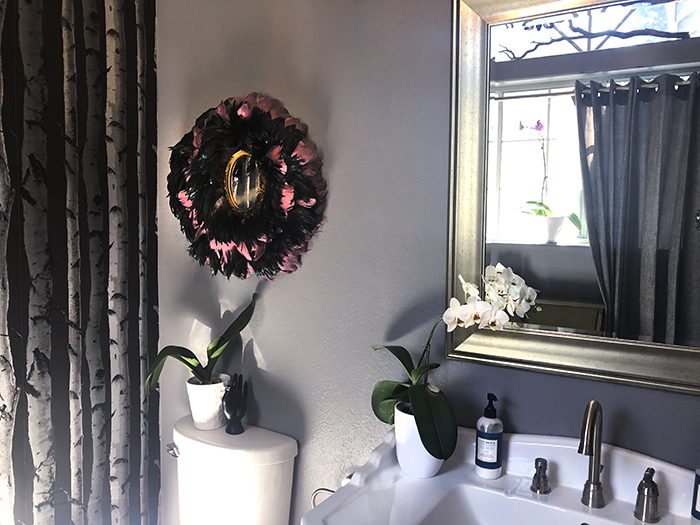 So, all this is to say that I love this bathroom. 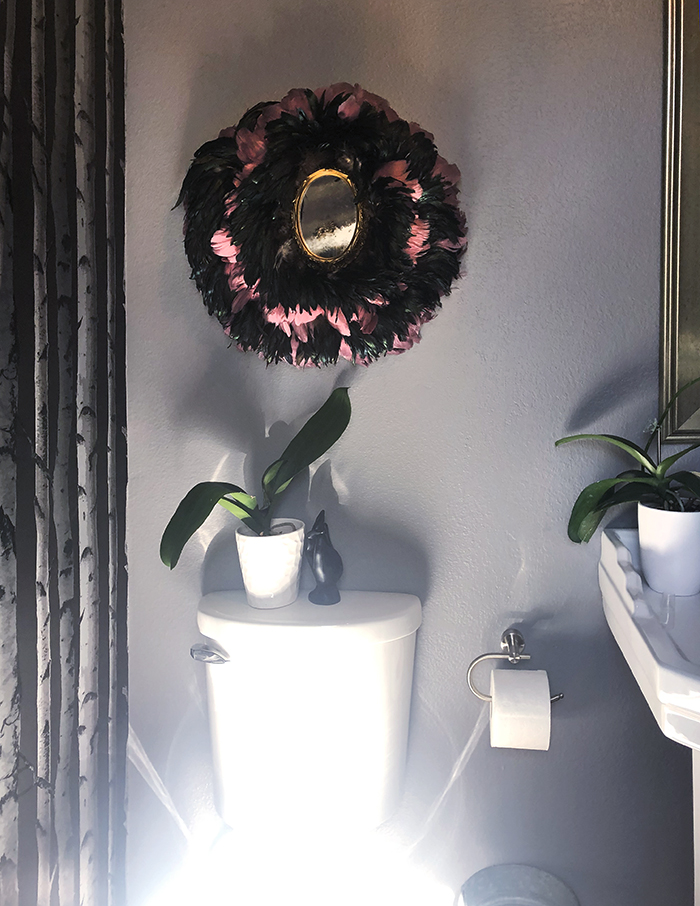 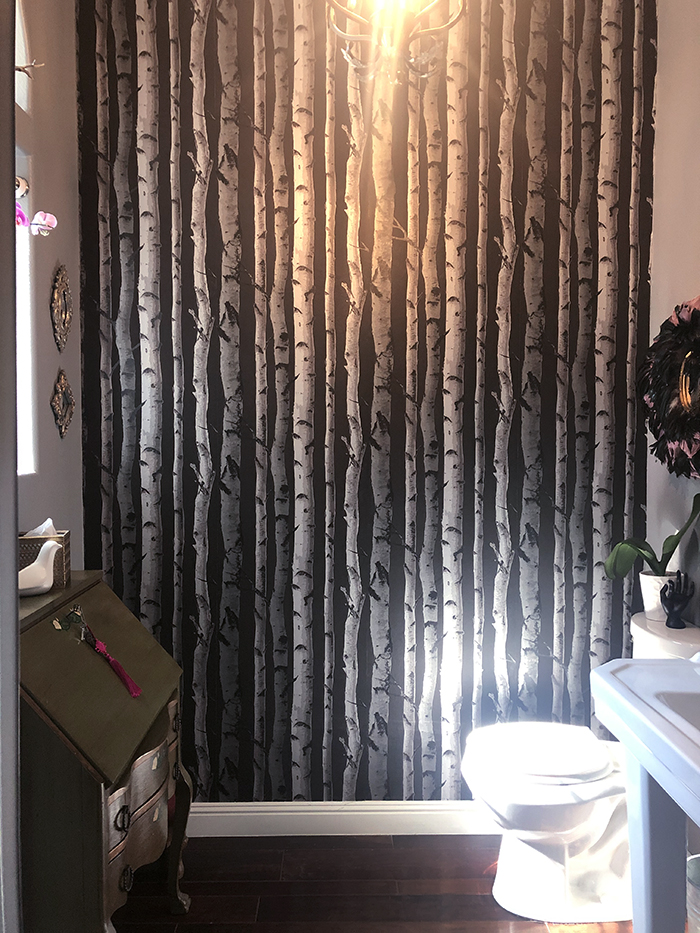 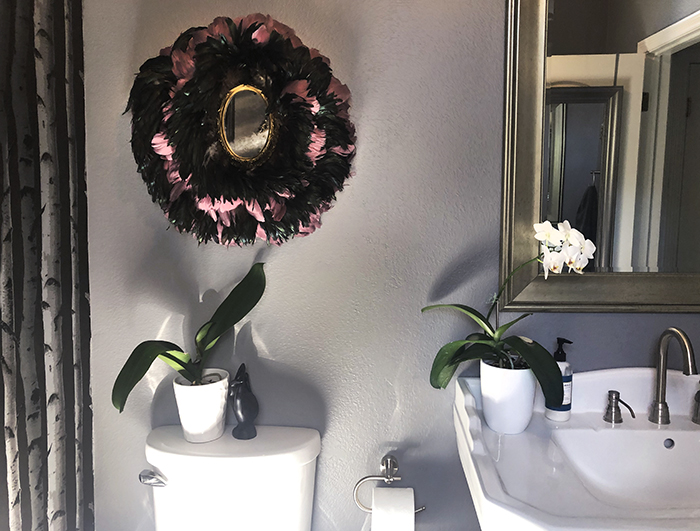 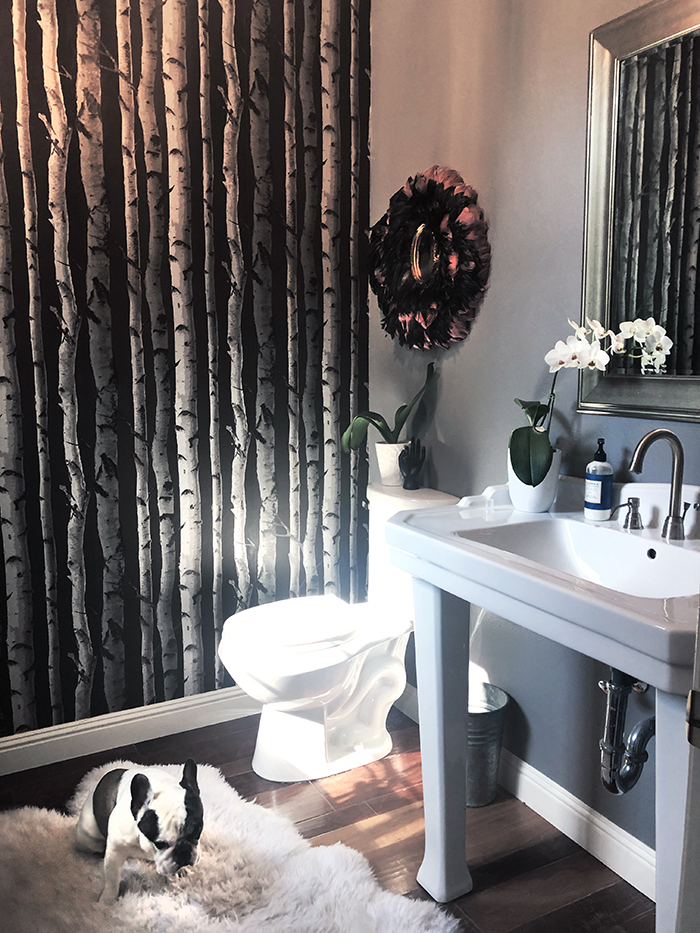 I actually like the idea of having a little rug in here… a small cowhide would be nice because of the shape, but I don’t have one to use. I brought in a large sheepskin just to give me an idea of the space with a rug in it, and while I do like it, it’s not necessary. Also, a sheepskin is too thick for a bathroom rug and would, I fear, not be entirely sanitary in a bathroom, even though this bathroom doesn’t get used very often, it just doesn’t seem functional. The dogs love it though, especially when the sun is hitting it. But it didn’t make the cut. 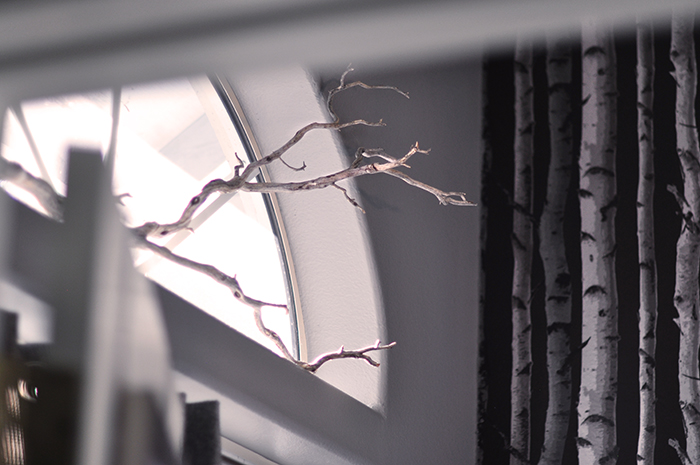 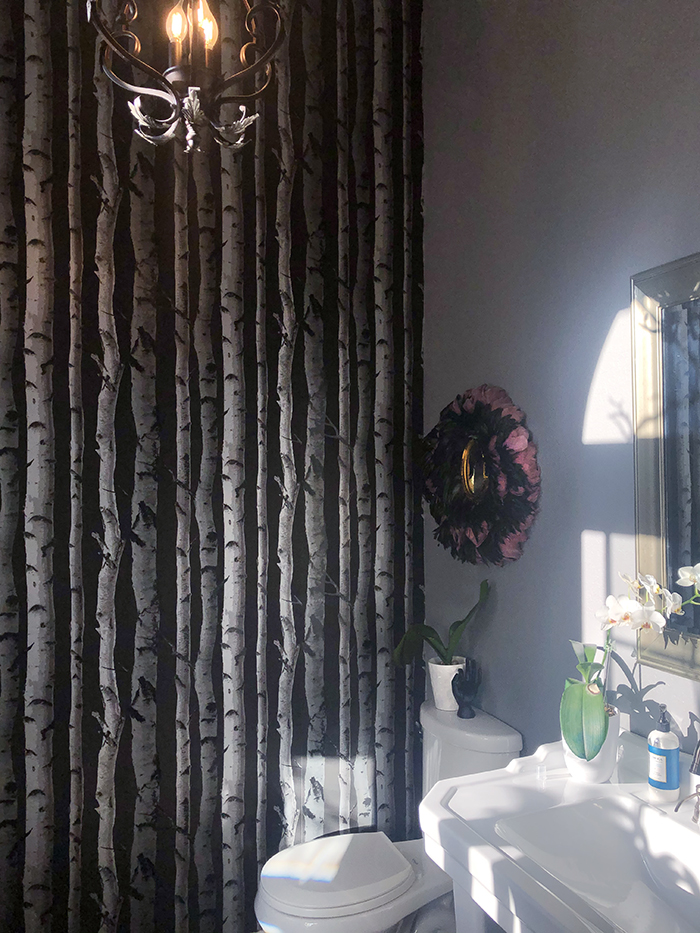 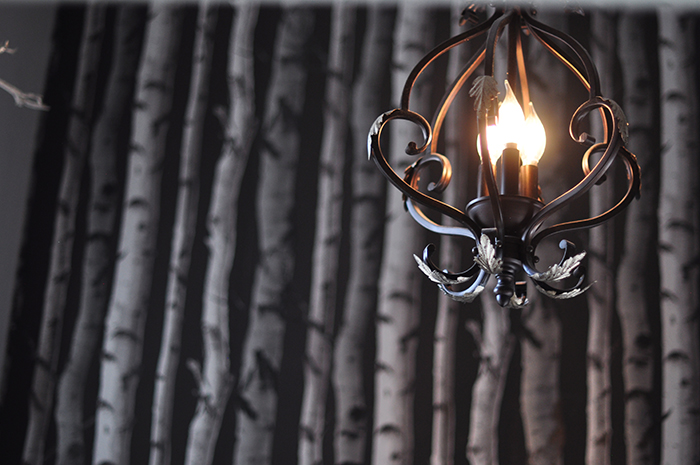 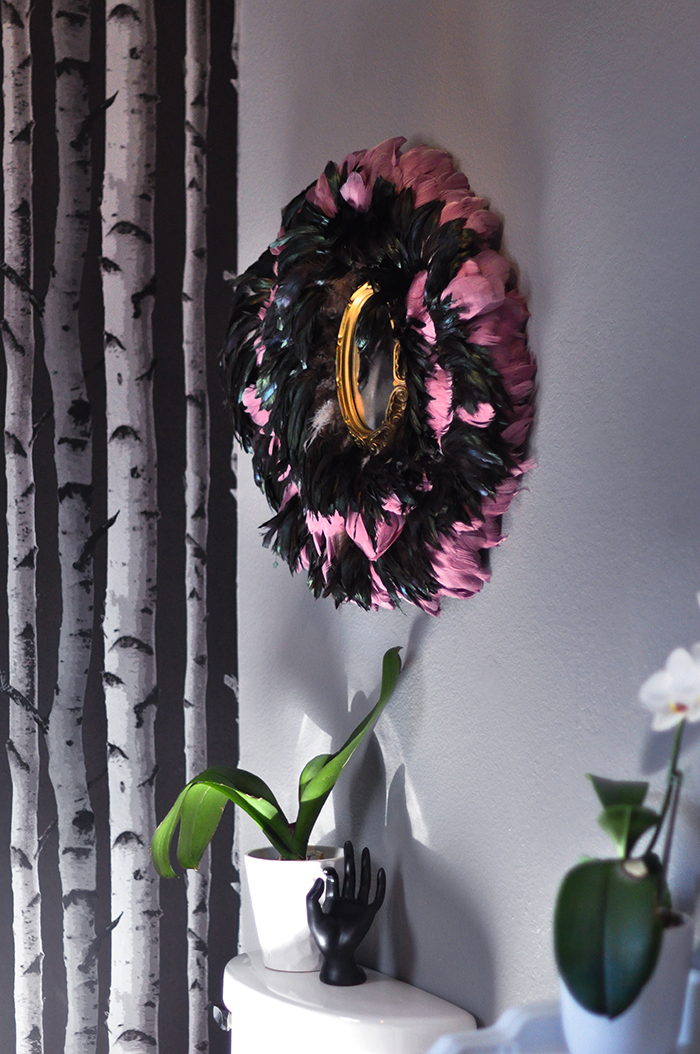 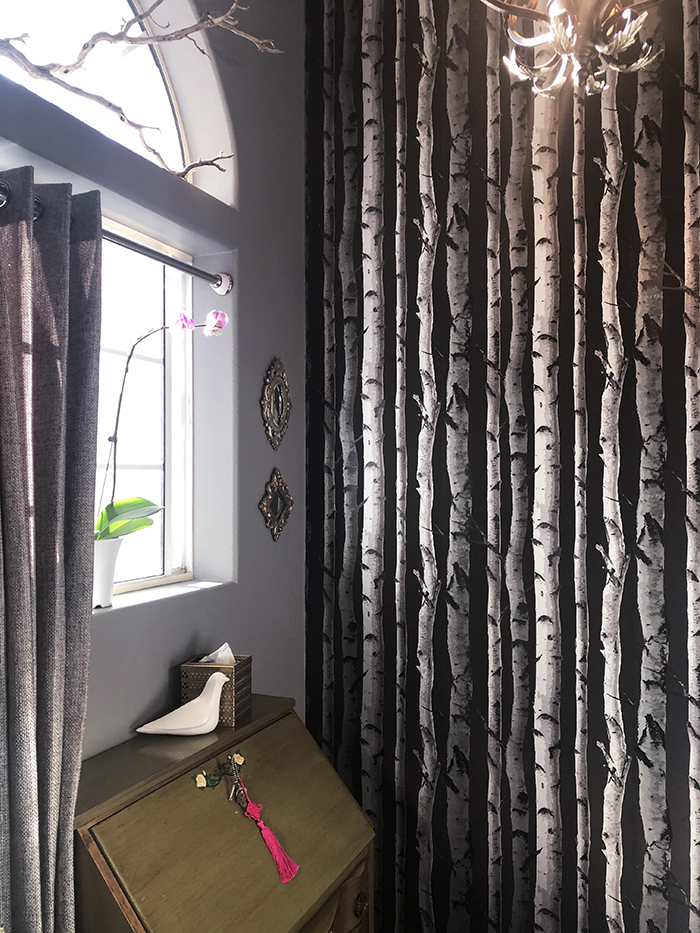 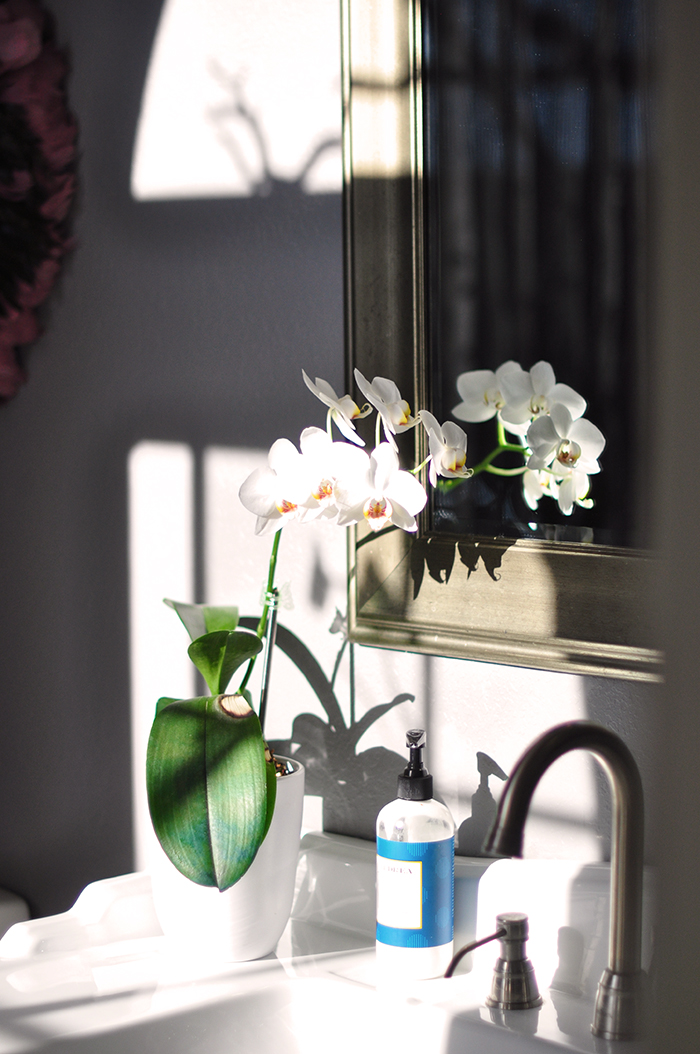 I regrew these orchids and they’ve been going strong for over a month now. More than anything, a good kitchen window or window with lighting is essential for growing back orchids. I was only able to grow one back in my old house using the under-cabinet lighting because they happened to be UV lights, but otherwise had very little luck. The trick, besides the clear plastic pots to allow more light in (though mine grow even just keeping them in their original pots) is trimming off the stem once the flowers fall off (as low as you can), watering (soaking) once a week as long as the leaves still look strong and green, and keeping them in a window with nice direct sunlight.

You see the other leafy plants in here? They are orchids too. I actually love the way the leaves look even when the flowers fall off, this is how I accidentally learned to regrow my orchids in the first place 🙂

You can move them around the house in between waterings, but make sure they get extra sunlight time in the windows. 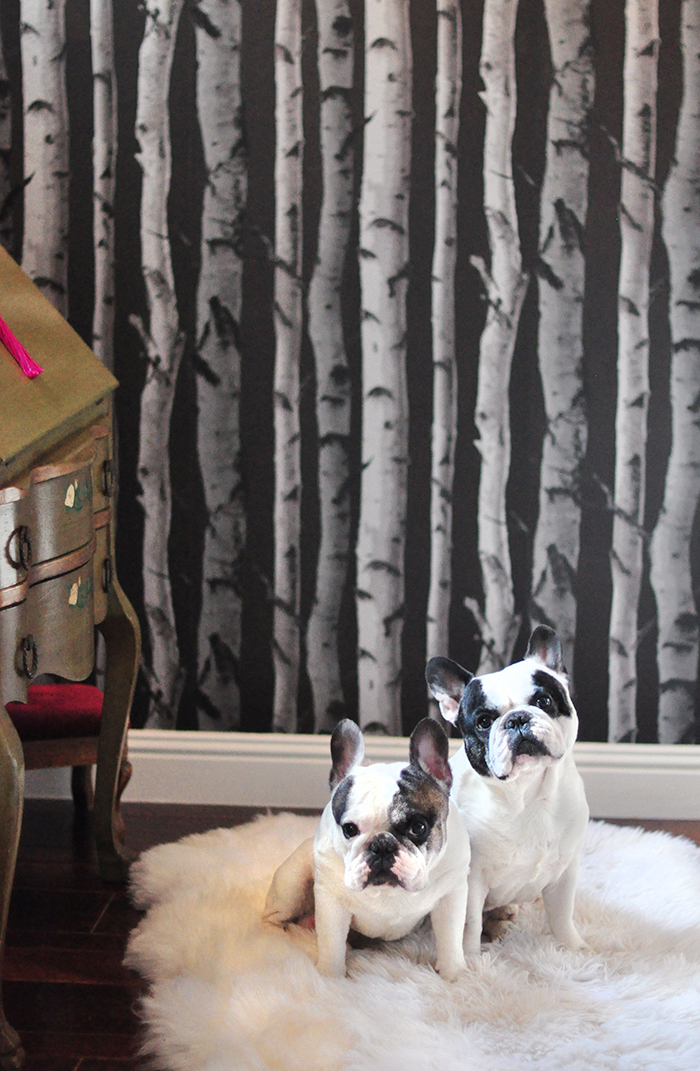 They Can Dance, We’ll Stay Home Instead