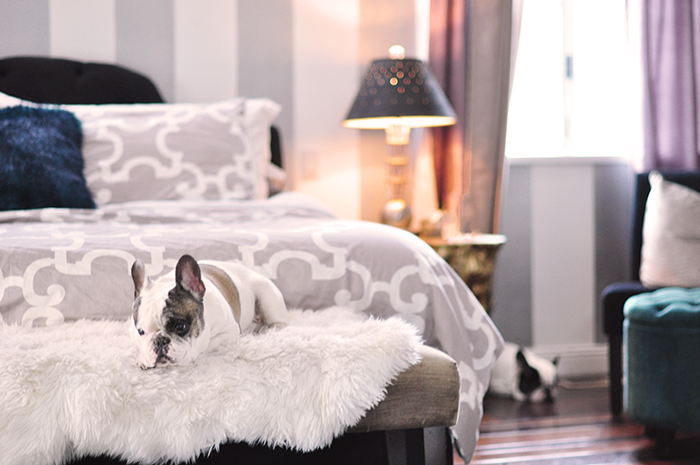 Welcome to our Master Bedroom Lovecats…

…which has recently become a pseudo workspace for me and so I thought I’d share.

I know I’ve said it before, but I love this house! It’s really almost strange how perfectly all my furniture and decor fit in all the spaces. The master bedroom is on the main level, down a little hallway off the kitchen and is almost as big as my last master but with a better layout and a fireplace and built-in bookshelves, and a window/door with a deck/patio off of it, a large closet and a en suite master bath. So it’s way better really and it’s kind of fabulous and it came painted with a metallic silver/grey striped wall, which we left, obviously.

The wall behind the bookshelf was burgundy so we painted it and the facing wall in a medium grey and left the rest of the walls white.

Other than paint though, I was determined not to spend a dime furnishing or decorating (throughout the entire house) because we’re renting and I already have downsized and still have so much furniture in the garage that needs to be moved to storage at the moment (or sold), so even though it would be nice to buy new, I love using what I already have to decorate and create new spaces I love. Luckily this space already lent itself to everything I already had and I was even able to incorporate the same color scheme as my last master bedroom (which I never felt like I finished) while adding a few more gold/brass accents.

The bed, rug, lamps, curtains, bench (which originally was purchased from Z Gallerie to use as dining room seating almost ten years ago), two black chairs and teal ottomans were in my former master. The gold stumps were sitting in the long hallway and before that in a sitting room of my previous house (I’ll never give up my gold stumps) and I love them as side tables. The little gold and glass topped table, large mirror over my dresser and white Ikea expedit shelves and desk unit were all in my old office. And though it seems like a lot for one space, I kind of love it. Everything just works… 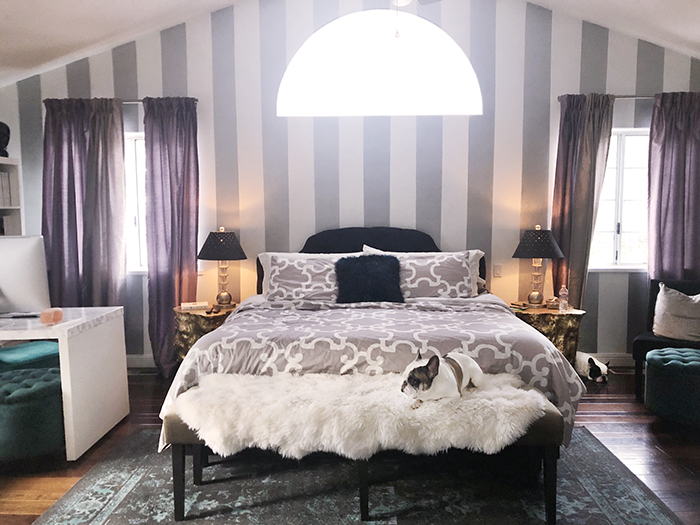 However, I am not entirely in love with having my desk in the bedroom.

Although it was the original idea for the space because the house doesn’t have an extra room for an office, once I put my desk in here, I immediately said NOPE, I didn’t want to share a workspace with a sleepspace – so I created a tiny workspace office in a room downstairs off of the garage.

HOWEVER… in the six months we’ve lived here, I’ve found that I never wanted to go down to said tiny workspace to work, and when I finally would, I’d hurry my work so that I could come back up to the land of the living.

I actually like my tiny workspace dungeon (I think it’s on my Instagram stories if you want to see it), but feel so far away and disconnected when I’m down there and I didn’t utilize it as much as I needed to and so in the past few months I’ve been pondering bringing just my computer upstairs. It wasn’t until the power went out during the storm leaving us with a half-powered house that compelled me to set up my desk and my computer in the bedroom. And I have to say, it’s been nice. I’m working more and enjoying it as I used to and instead of procrastinating and then rushing, I’m working at a nice pace again and it feels good. 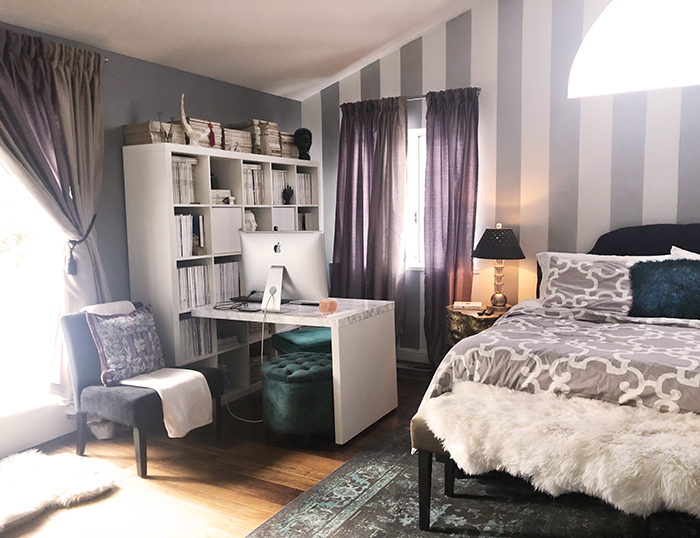 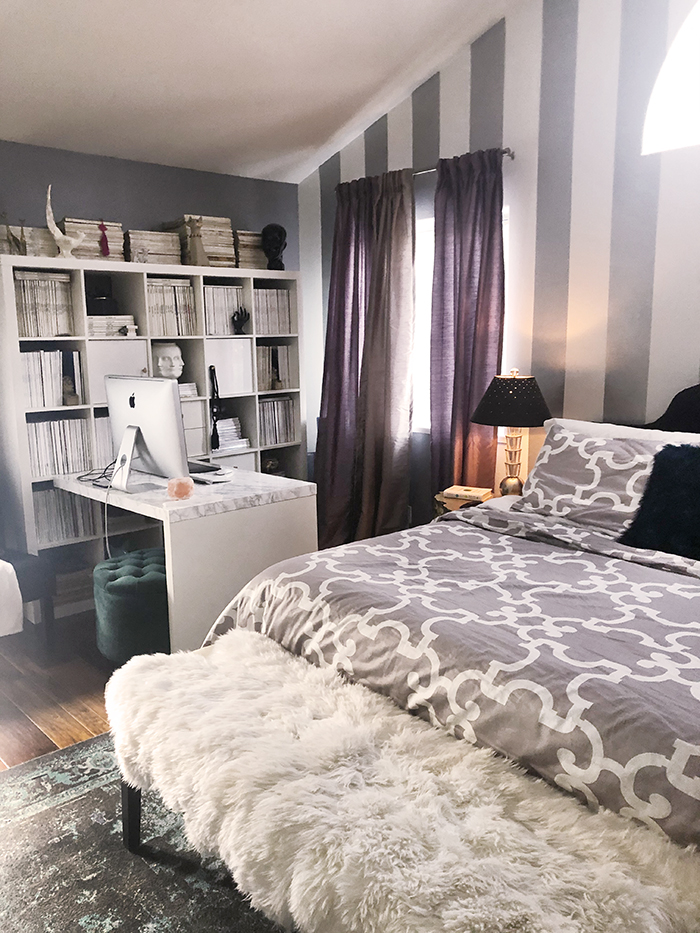 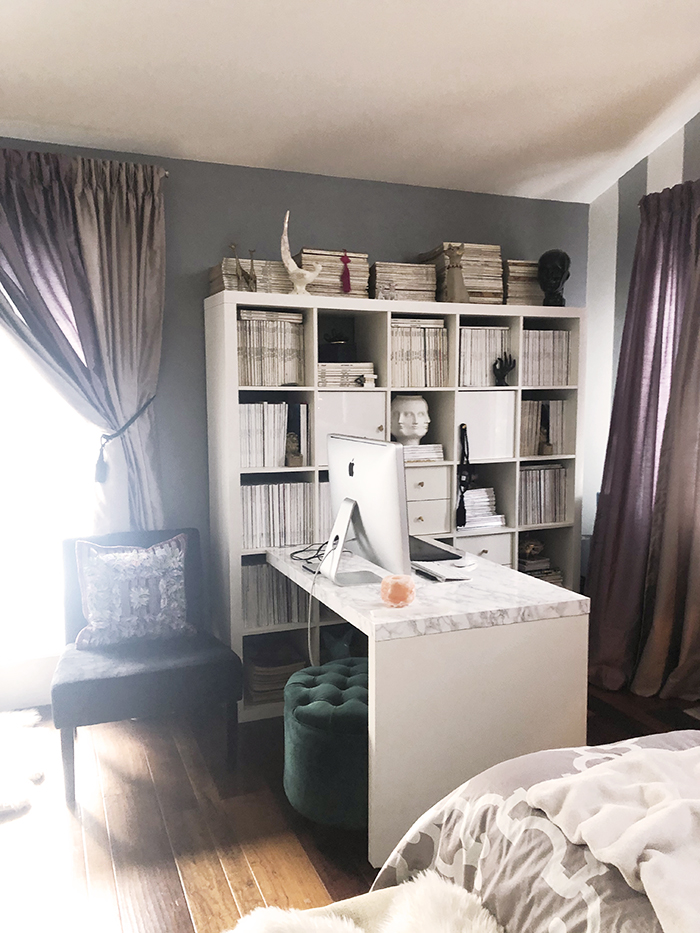 Of course I liked the look of the bedroom before a little better, I don’t mind the way it all looks now except that I almost feel like a much younger version of myself when I had no choice but to share a workspace with a sleepspace, but feeling younger isn’t a bad thing, right?

They also say that a workspace and even bookshelves like these, stacked with books, both affect sleep, but I’ve honestly slept better here, in this room, in this house than I ever did in my old house, so we’re doing something right. And I have to say, I love the built-in bookshelves surrounding the fireplace and the TV fits perfectly in the opening. So it’s a win-win. A few of the books were in my old office and the rest were in the reading room. My old house was so big, with so many little rooms, it was easy to spread everything out, but I tend to be more creative when I have less space to work with. 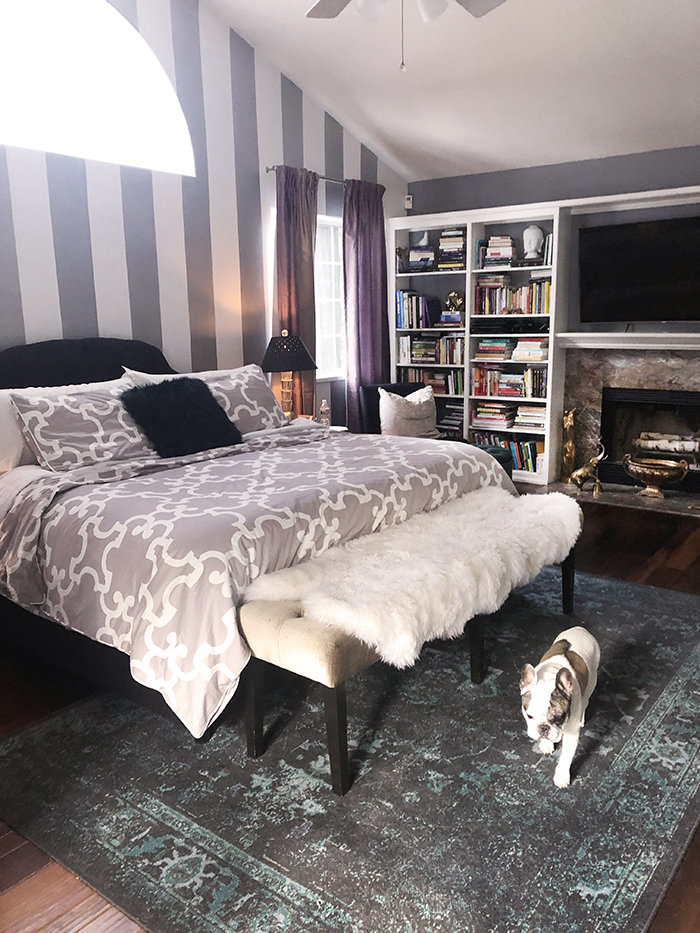 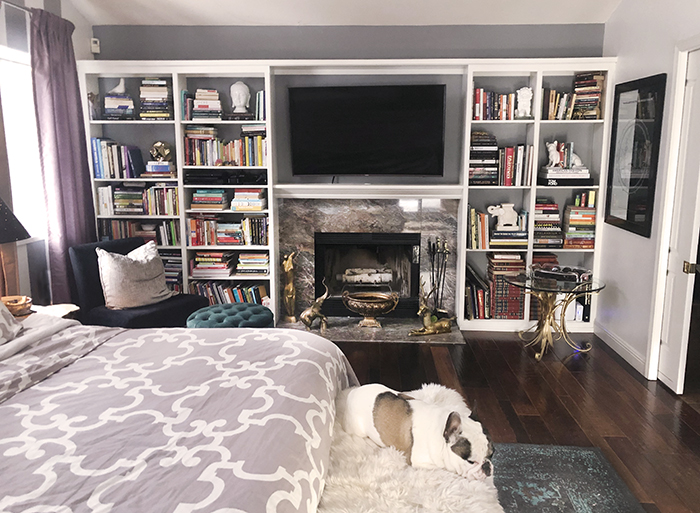 Overall I like the space. And though it’s not very masculine, it doesn’t seem overly feminine to me either. A little GLAM, yes, but other than a few complaints about not having anything of his own in this space, HE seems to like it too.

This is the first time in over a decade I’ve had my clothes in the master. In the last few houses, the master closet was small and so I created an office/dressing room in one house and a similar situation in my last house because my office had the largest closet in the house and a bathroom as well, so my stuff was all contained in one space, which made my work a little easier and getting ready easier as well. I don’t mind having my wardrobe in a separate space, but he’s not quite used to it yet and doesn’t love it. In the end though, we opted for a guest room upstairs where he could keep his clothes instead of turning the entire room into an office/closet for me. Now we have a guest room and extra bed upstairs, which is handy. And my office is spread out into a two spaces, but I’m getting used to it now.

Ideally (in a perfect world), this room would be my office and there would be another room similar in size and features and on this main level that would be the master.

The ikea Expedit shelves now contain all my vintage magazine collections, which I was going to leave in boxes, but decided to display them because I had the space. At least they look clean and mirror the bookshelves on the opposite wall. 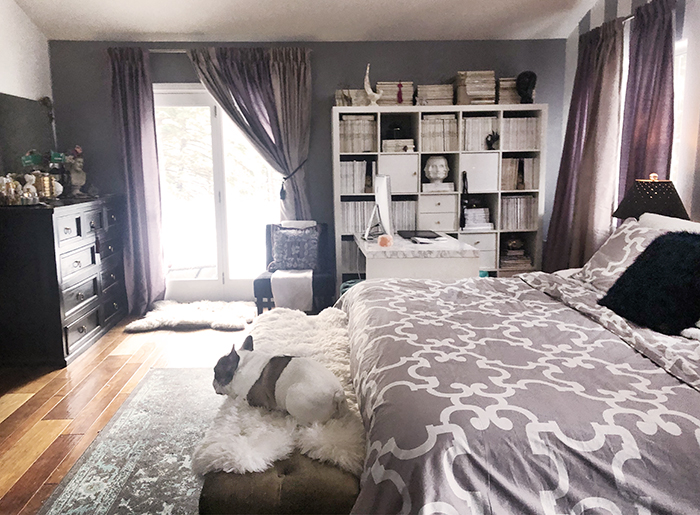 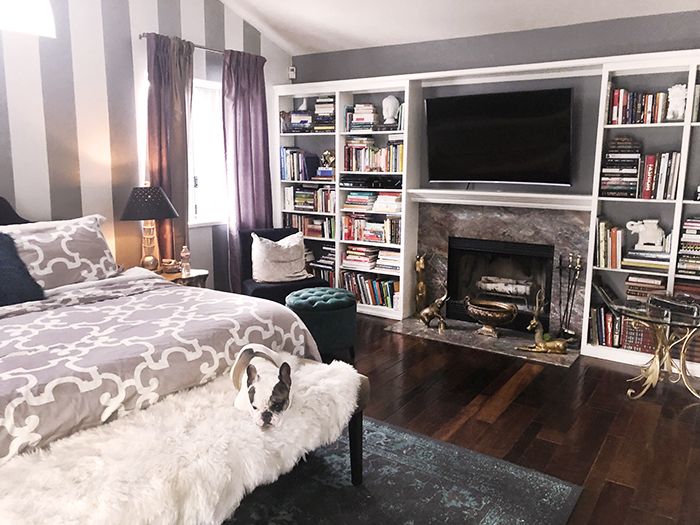 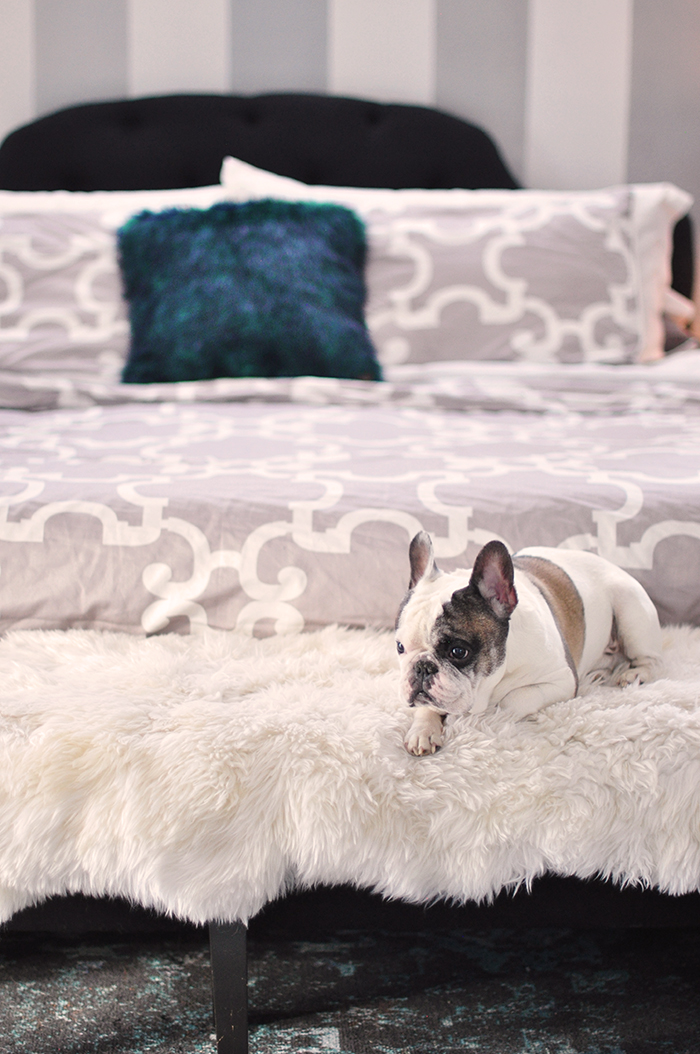 I also have to mention how much the dogs love it here. There are more windows for them to look out of at their level and a better outside space as well. 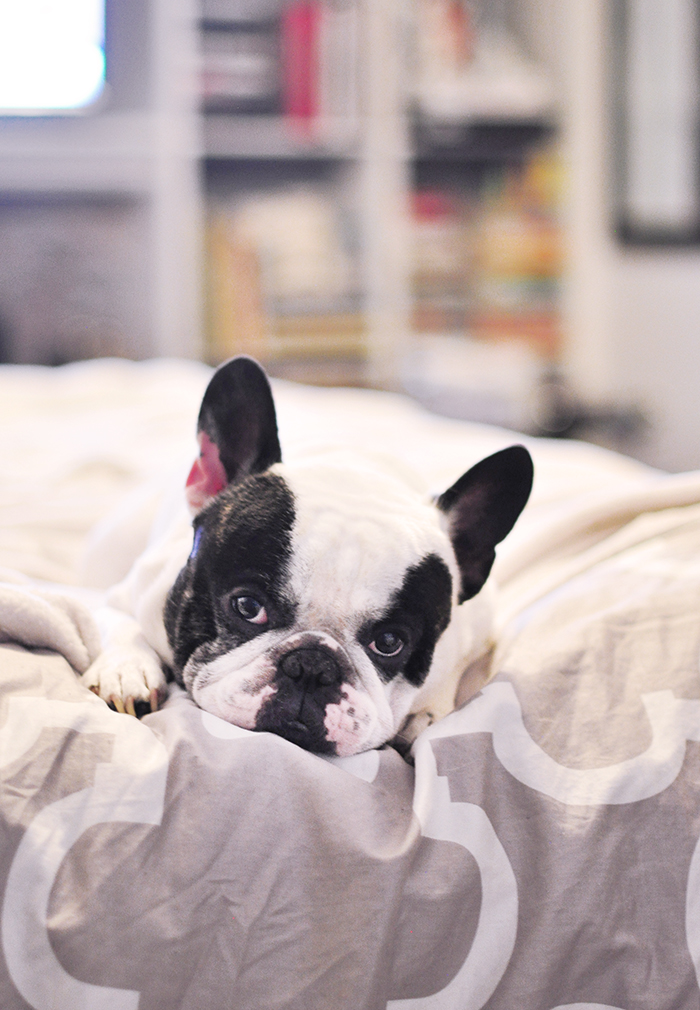 The only thing that I have slight issue with is how bright this room gets in the morning. It wakes the dogs up and then they wake me up. My old room stayed very dark, which was the best thing about it probably, but the large half circle window above the bed is where the main issue is. We found a fabric window covering for it, but it’s still rather transparent, so I’m not quite sure what to do up there to allow light in during the day when we want it but close it at night. Also, I bought this bed specifically for my last master because it had a slanted wall that would only allow a headboard so high, so there is an odd space between the window and the bed that needs something, but I haven’t found anything I love enough to put in the space (and again, I don’t want to buy anything new). A JuJu hat (or maybe a few DIY Juju Hats) might look nice, but for now, it’s staying blank. At least the stripes give it a little interest. I think ultimately a taller headboard would do the trick but I’m standing by my rule of not purchasing anything for this house UNLESS we end up buying it. Then that’s a different story. 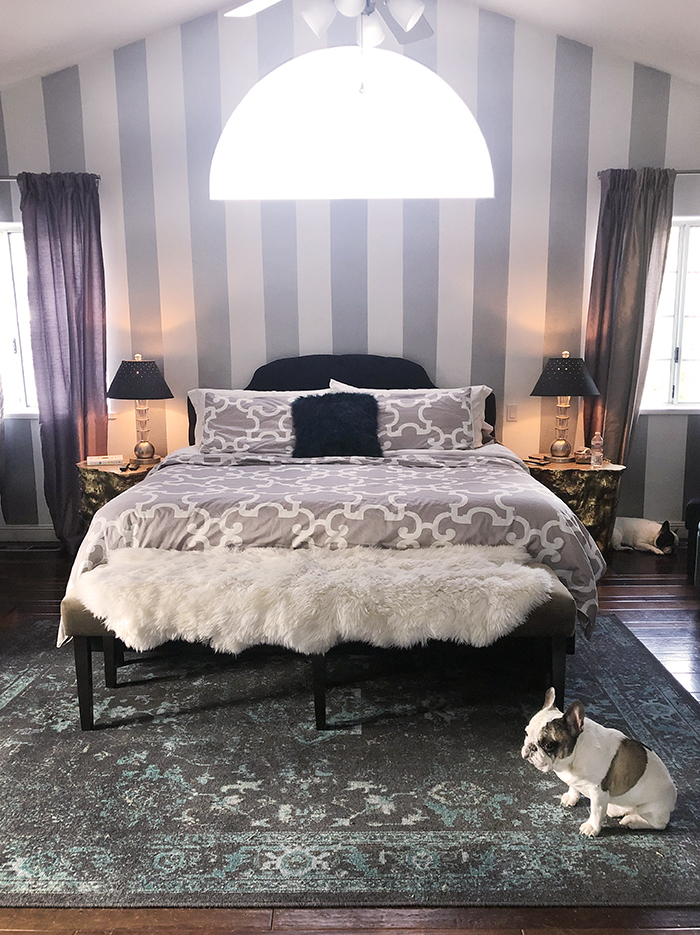 In looking through the photos (which I quickly took with my iPhone) I can see now that I should have spent a little more time making the bed look more appealing for photos and maybe cleaned off the nightstands, but you know, real life – lol.

Eventually (hopefully) I’ll share the master bathroom and my closet, which I probably should have just included in this post, but since it’s December, my closet is currently housing bags of Christmas gifts that haven’t been wrapped yet. So maybe January would be a good time to share… This was a sort of last minute shoot/post idea because I set up my desk last week. But for now, it works rather well… though I’m open to suggestions if you have any 😉

* Comforter and bedding from Serena and Lily