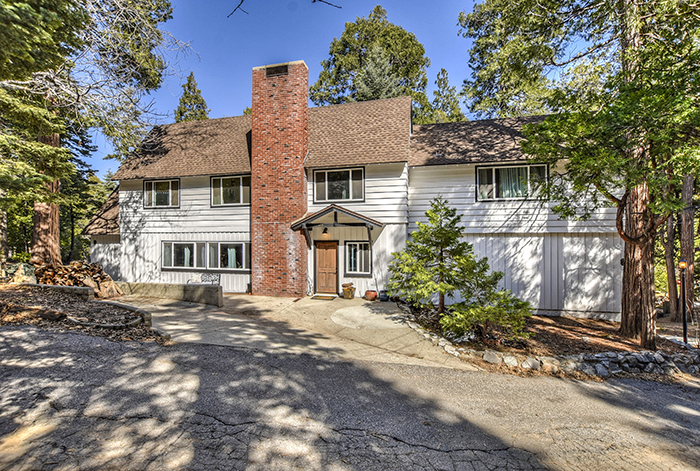 Lovecats, this is MY HOUSE… & I’m still crushing HARD on it!

The last two weeks have been insane. I decided it was time to make the move… Called my realtor and by the following week already had a showing. Two days later, a photographer was here then another showing after that. It was listed on Friday March 29th and I had a showing the same day and the morning after. Today is Sunday. There’s an open house from 12-4… so if you’re interested in seeing where I live, now’s your chance 😉

But also, now that you know my address, please don’t steal anything 🙂 and don’t murder me in my sleep. 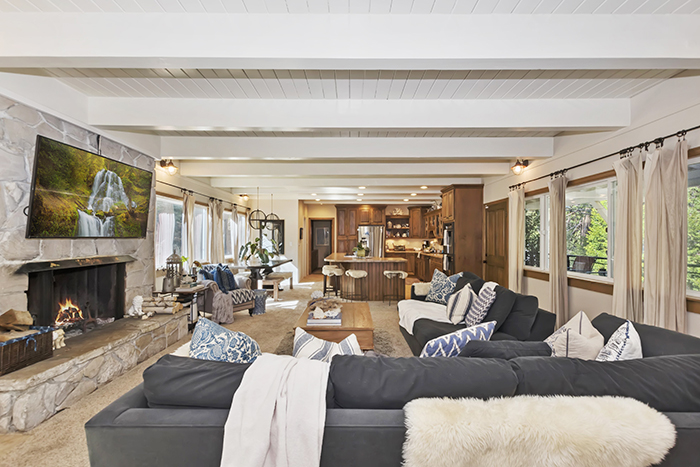 From Listing…
Near Level Lot near Orchard Bay! This cute and quaint 1950’s vintage charmer is located in the Lanes has it all. Level entry, large Master on the main level, 2 car garage, dual access, ample parking, huge flat yard with picket fence, perfect for RV and boat parking or maybe even a play area for the kids, landscape lighting, 5 bedrooms with a possible 6th/office/playroom, and a second large master on the upper floor. There is a large covered porch right off the main living area and kitchen, dual pane windows, large laundry room, AC, unique floor plan and perfect for entertaining. Home is located adjacent from cut-de-sac. You can cross the street and hop right on the ALA trails and walk to the Village or Marina and yes it has Lake Rights.

Though the listing on Zillow doesn’t seem to have all the correct info, it’s only been on the market for like 2 days now, so maybe that will come… or maybe it doesn’t matter?

It was built in 1957 and also, technically, it’s 6 bedrooms, but since the A-frame bedroom at the end of the hallway upstairs doesn’t have a closet, it’s not counted. From the exterior, my garage looks tiny, but it’s actually over 600sqft . Every bathroom has a shower in it, the one in my office (which is technically a second master, has a tub as well – for the record, my plan was to eventually redo all the bathrooms in the house, though they are fine and like new, I just wanted to upgrade them all). This house feels so sturdy, and I love that I’ve literally seen nothing like it up here, which makes it totally unique. It has endless potential for upgrades and renovation and exterior landscaping, which again, I had planned to do, eventually. But eventually never came… and here we are. 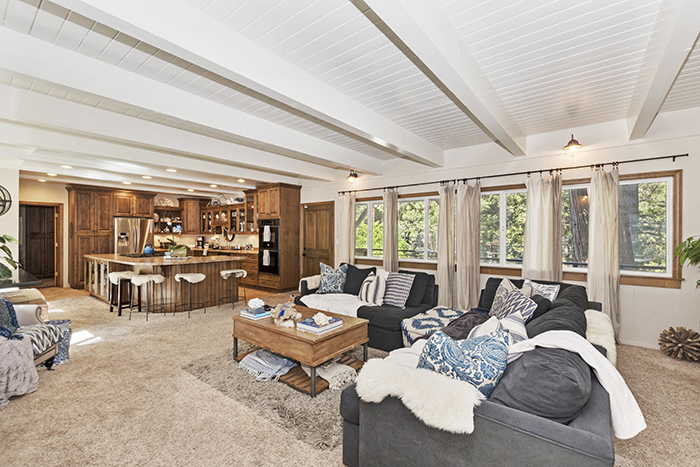 This is what it looks like when you walk in… the door next to the windows leads to the patio deck and backyard. Though technically my addres is A Lane, the front door (top photo) is actually on B Lane.

And from the opposite side …and all I can focus on is the gate on the stairs that I forgot to take down before the photographer got there. My mind has been mush lately. Literal. Mush. 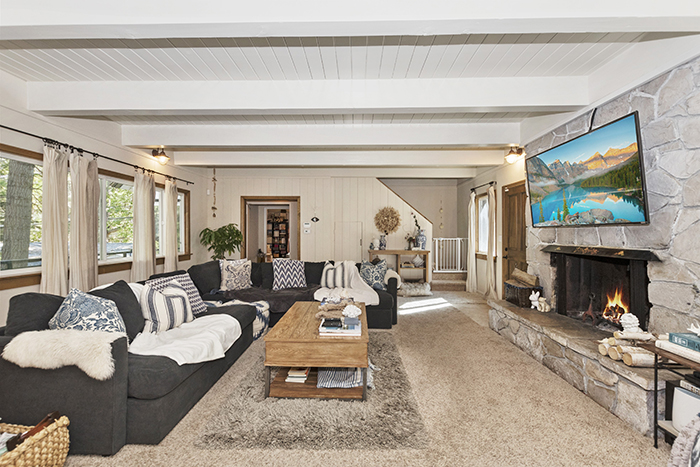 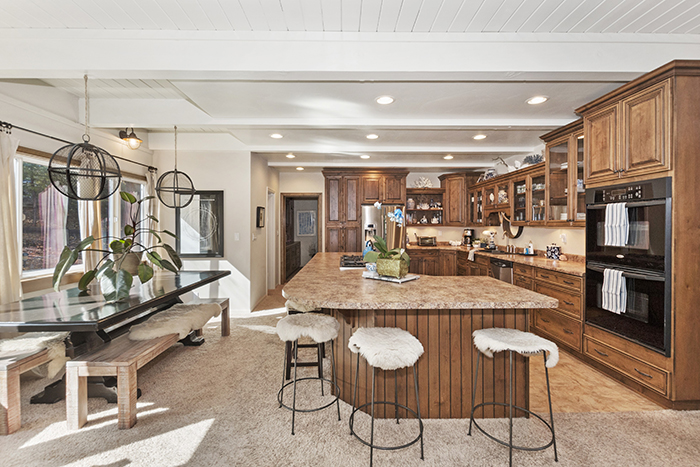 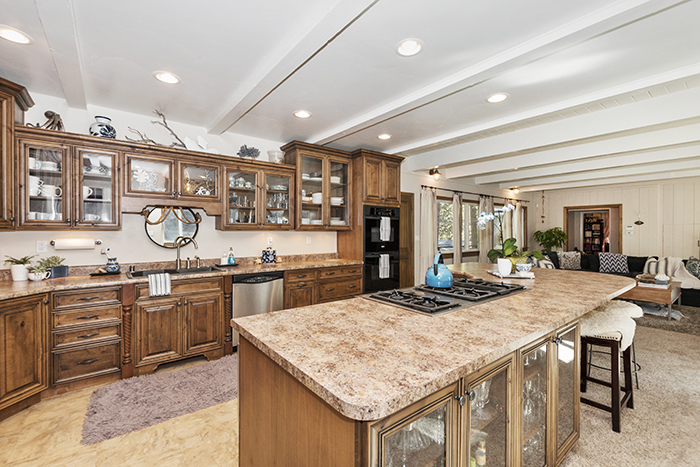 Laundry room – well one side of it… and it’s the room past the kitchen and bathroom. 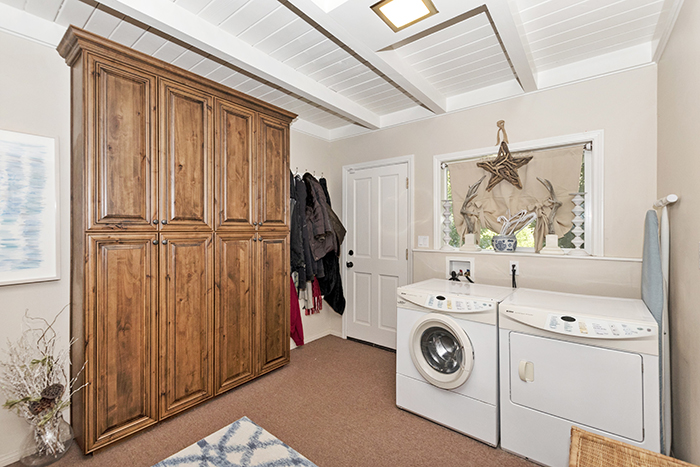 And, my office, to the right of the living room, through the little hallway, past the door and super cute stairwell to the garage – which they did not photograph so click the link to see it if you haven’t. 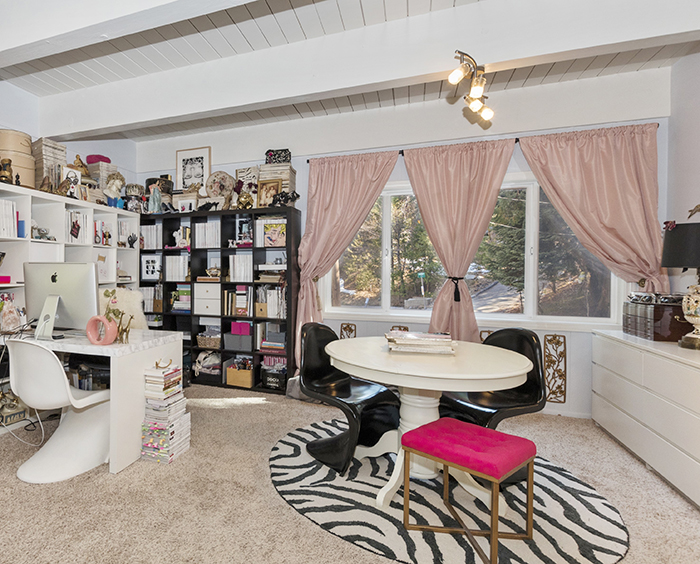 At the top of the stairs, you have a choice: up two steps is the Master… I recently took down my feather canopy because it was molting. There’s a grey sofa just past those green stools and my black dresser (find the diy makeover here) 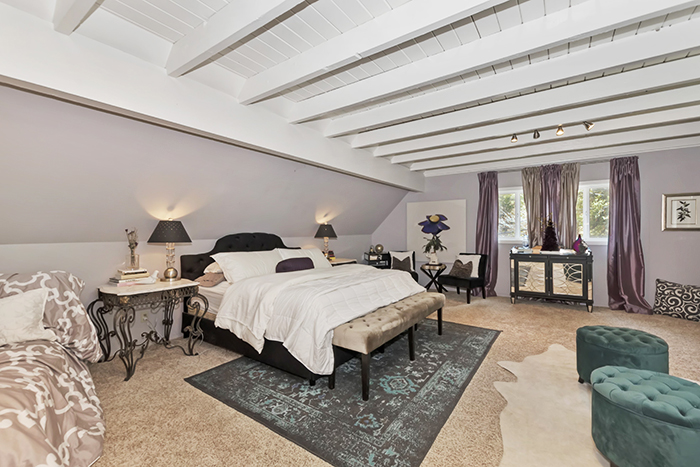 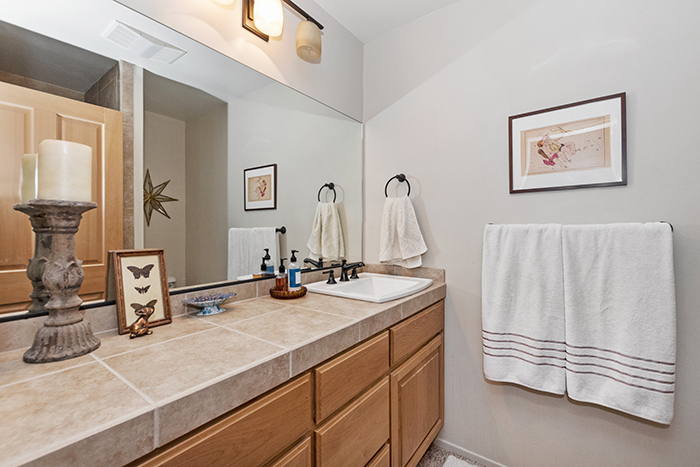 If you go left at the top of the stairs (and two steps up), is the long hallway with 3 bedrooms and a walk-through bathroom and step down into the A-frame bedroom… 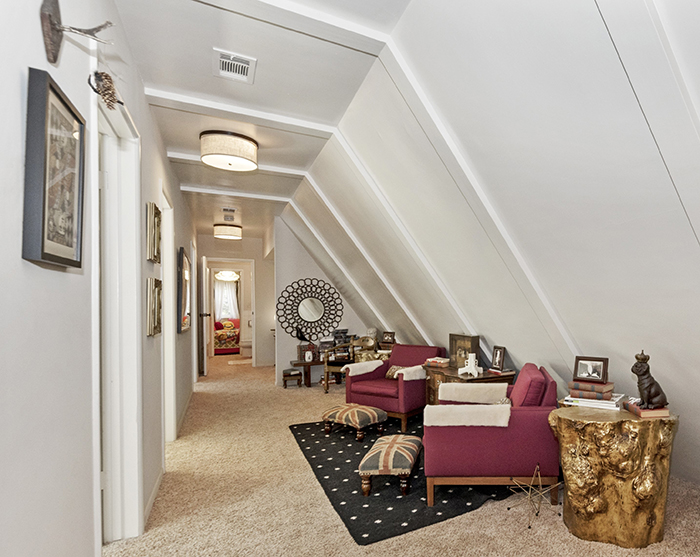 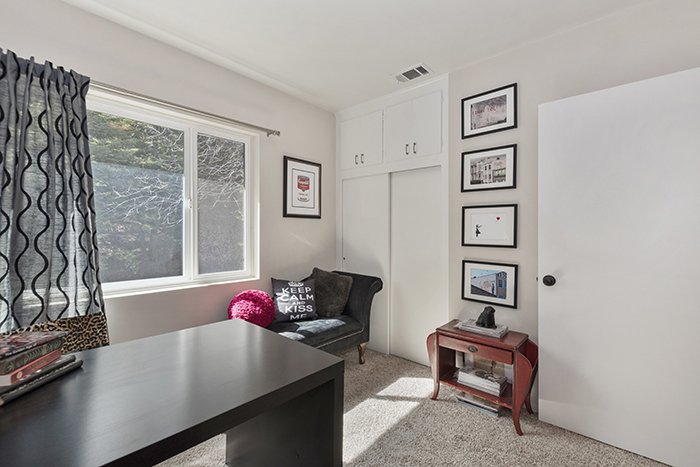 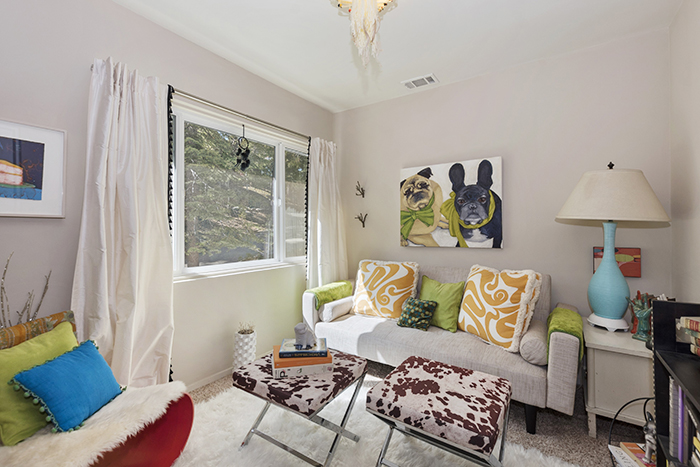 See my Reading room renovation…. which has slightly changed since. 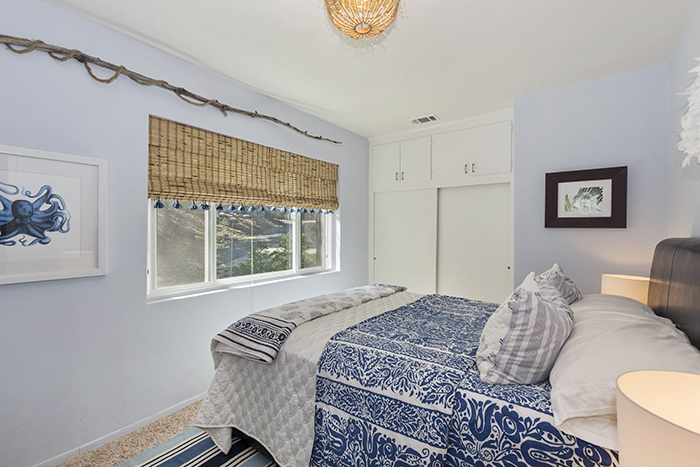 See my beachy blue guest bedroom makeover…. though it too has changed slightly since then. 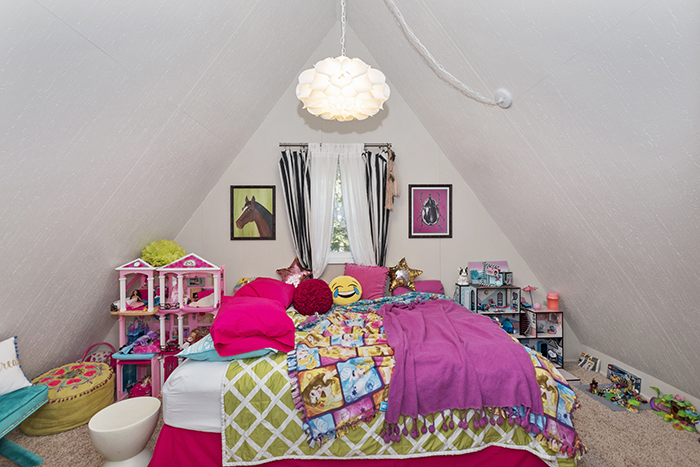 This a favorite room for kids, and two beautiful little girls have been staying here every other weekend for the last 5 months. It’s cuter in person. And liked the bed kind of messy like that, but it doesn’t look as cute in the photos and you can’t see the entire room really … there’s another shot on the listing if you want to see it.

I love my house. If I could stay here, I would. Have I said that already? Probably a million times.

You can see more/all the photos in the listing on Zillow, here. 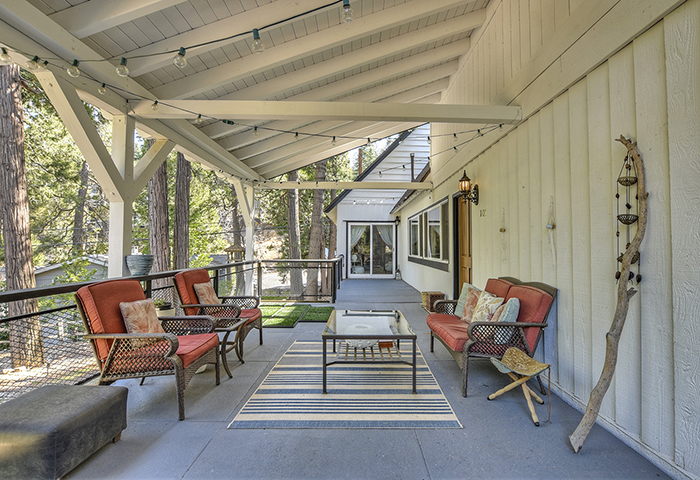 My house photos for the listing were originally scheduled later in the week but my agent thought the house looked good enough so we bumped it a few days. I thought -fine, let’s get it done… but looking through the photos I realized how much I wanted to do before shooting.

After the crazy winter, I had a few fix-its around the house to finish, like repainting the deck, but since it’s been so cold, I didn’t get a chance to before the photos. There were also a few paint touch-ups inside that needed to be done but din’t make then photoshoot. I’ve had them all fixed since, so at least the house looks better in person than in the photos.

But inside I wanted to clean out my laundry room/butlers pantry area, get a new plant for the living room (by the chair), and a hundred other things I see in the photos that drive me crazy. Also, each spring I buy new plants for the deck and front door area, but it’s not quite spring up here yet so everything is bare. Another great thing about spring is that all my trees and plants bloom outside, making the property look so much more beautiful… but alas, I had to list now.

So I look at the photos and see all the flaws and I only hope that once people see the listing and like it, they like the house even more in person. The photos just don’t do it justice. But whatever.

It’s hard because I’m so proud of my house and though I never got to really finish it as far as upgrades and exterior landscaping, it’s still beautiful to me. I’d buy it all over again if I could.

Selling a house is hard, doing it by yourself is even harder (though I’ve had a little help from my mom and a friend), but selling a house you love that you don’t want to sell changes the entire perspective on it. If I were a different person, I would have let it go to shit, stopped paying all the bills and let it foreclose. But that’s not who I am.

I’ve had a few showings already and have had to leave with the dogs while they’re happening, obviously, so I’ve been driving around town, looking at houses and areas that I may be interested and so few have what my house now has. Flat land, so close to the lake, level entry, garage + access to the house and easy access to the house from the roads, while also being in a wooded and private area… in this mountain town, those things are a must for me (though I probably don’t need so much land) but living through the winter months up here has taught me a few things and all those things are a necessity I think.

Although I do feel ready to move on, this has been ridiculously hard on me and it’s happening so fast, though I think that’s a blessing really. I’ve basically been crazed and nauseous for the last two weeks and clenching my teeth so hard, unconsciously, each day that when I finally lay down to go to sleep, I get a pain in my teeth that takes my breath away and brings me to tears. Luckily it’s gone by morning, but each night it returns. Also headaches and random bouts of crying have become the norm. At the moment, I have a ticking in my right ear that will not stop. The stress is palpable, it’s consuming… and as soon as I feel like I’m beyond it all and so ready to move on, I see a photo or try to write (like this post) or I just think about it all and I just burst into tears and then get angry and then it’s back to tears. Then minutes later I feel grateful

I’ve been cleaning like crazy, and readying a house to sell that I love so much. It’s such an odd thing since I’ve never moved from a place I love. I move when I’m tired of a place, need more space or new energy. But here, I have everything I want in a house. There’s nothing lacking. I have no complaints.

I’ve done a few upgrades over the years (if you remember when I moved in, there was a 1950s playground in my backyard), the house was army green, you could see right under the deck -ugly- (the lattice covers that now) and the deck was basically unusable until I had the roof built over it. There’s also brand new heating and air system, etc. and other little touches that don’t make too much of a difference to anyone but me. There was more I had planned for it, but I hadn’t gotten around to it.

I lived here 2 years and 4 months with my ex and 3 years alone (though the last 5 months I’ve had company) but bottom line is, it’s my house that I love and am sad to say goodbye. But as sad as I am, I want to rip the bandaid off, so to speak and hope it sells fast because at this point, I just want to move on.

I’m not sure where I’m going yet. I thought I had a solution… I’m not sure that will work out. But I’m excited to see what’s next. I’m excited to think about decorating a new house and having new surroundings and being in a new location, though I’d like to stay in Lake Arrowhead, particularly on this same side of the mountain. I just love it so much. 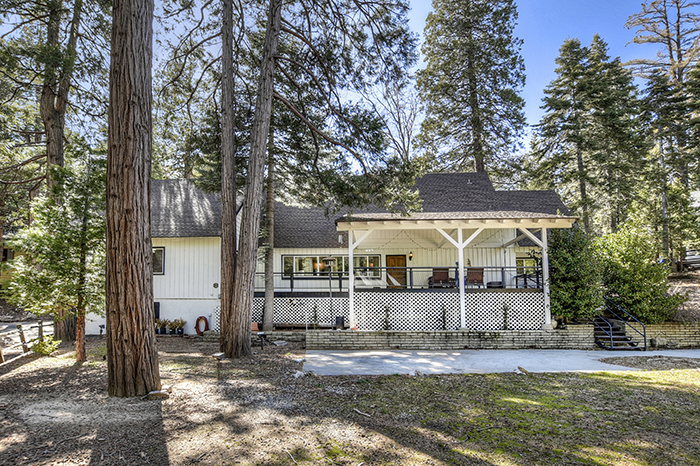 You can see a few before and after exterior shots in this post when I had the roof over the deck built Find more before and afters here – but wow I realize now I never really posted about the house as much as I wanted to!

I guess I never felt that the house was fully complete, but you can see all my posts under LAKE HOUSE here.

You can see more/all the photos in the listing on Zillow, here.