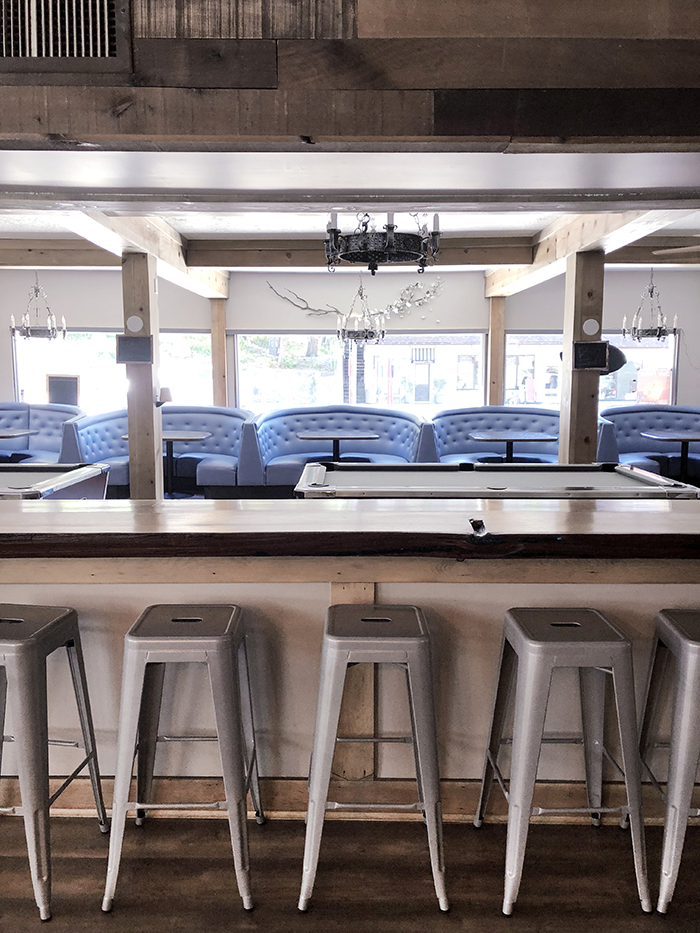 I SO wish I could have shared the renovation of the old Royal Oak into Dogwood Tavern with you in real time, but alas, I was forbidden. I ONLY wish I had not listened and done it anyway because I think these would have been a lot more fun to see as they were taking place back in late October 2016 when it all began.

But at least for those who may never get to see it in person, it might still have the same charm and enchantment for you and though I’m even more behind than I’d like to admit since we’ve been open for nearly 5 months now, though obviously time is an issue, I want to start the documentation where we began in the process.

Though we started many projects in the space simultaneously, and worked on them little by little as such until completion, the very VERY first thing we did to this space was remove the wall that closed off the two large rooms, what have come to be known as The Game Room (right off the entryway) and The Main Bar Room (just beyond the entryway), and in doing so, it opened up the space completely, making such a difference.

Because we are mainly a bar and not a fine dining restaurant, we wanted to be able to have a full line of vision from the main bar to the game room and to the front door, and this accomplished just that while also creating a really nice flow in the entire space.

Here is what the wall area looked like before… 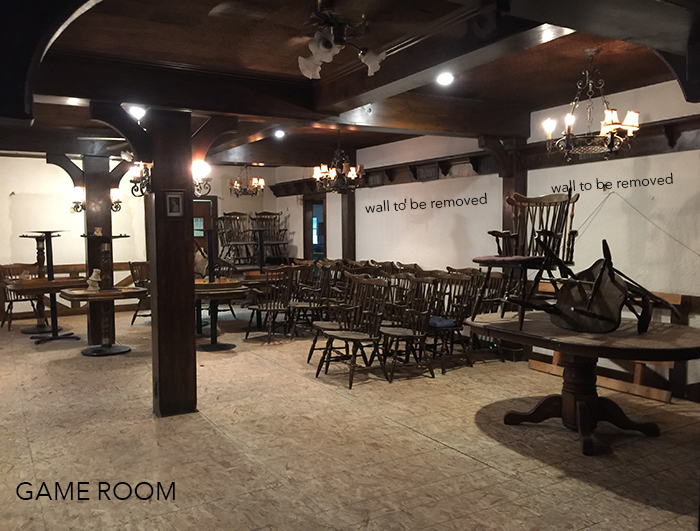 This is the wall that once separated the two large rooms. The photo above shows the view from near the entryway looking through the game room and the photo below is looking from the main bar room towards the game room. However, the wall completely blocks any view of either. 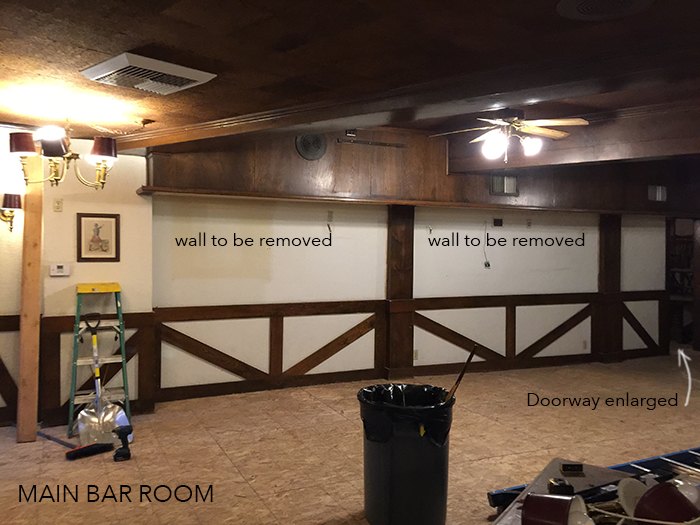 The goal was to remove the drywall and studs, leaving the beams and ponywall to create a partial bar with seats on either side to share the space.

The doorway at the end was also enlarged, as it was originally a standard narrow doorway just off of the kitchen door. 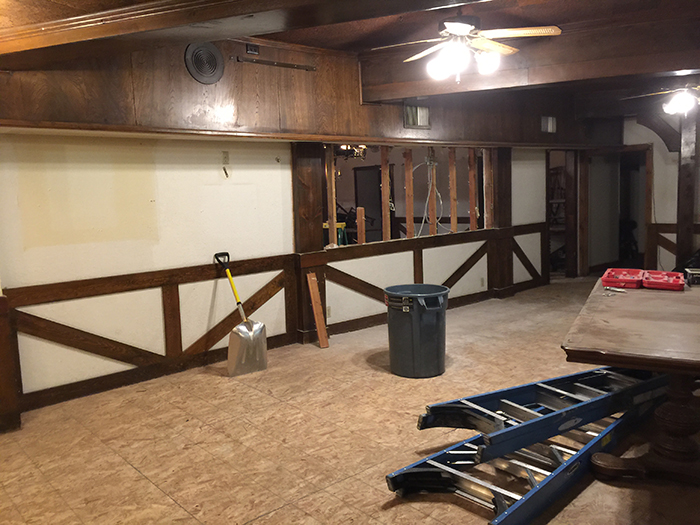 We did all of the work ourselves here, and in most of the renovation as well. The two men you see are my business partners (Chad & Mike), who you’ll see at the bar now as well if you stop by. 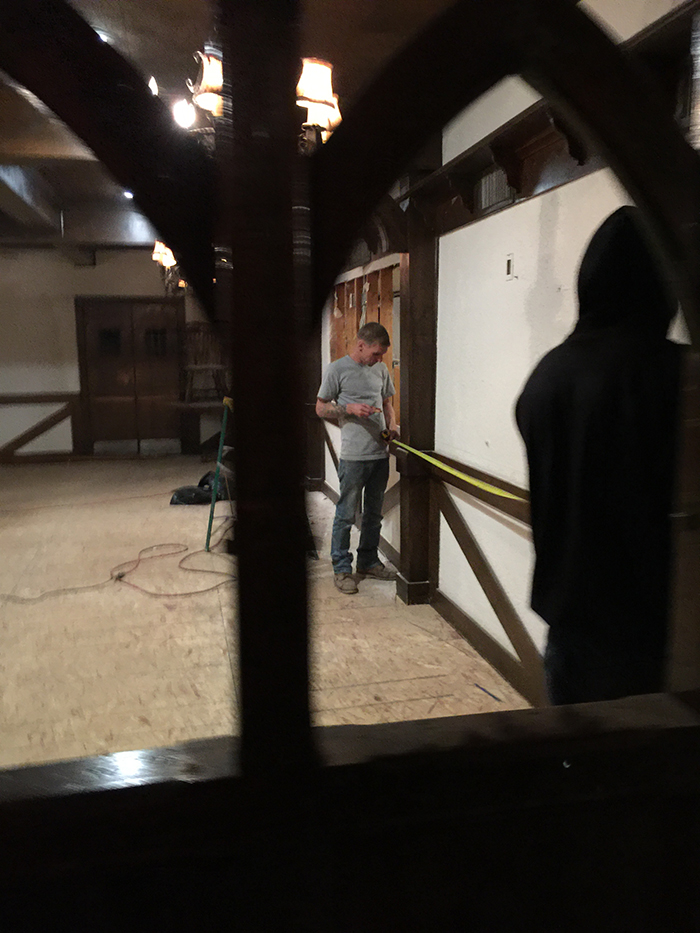 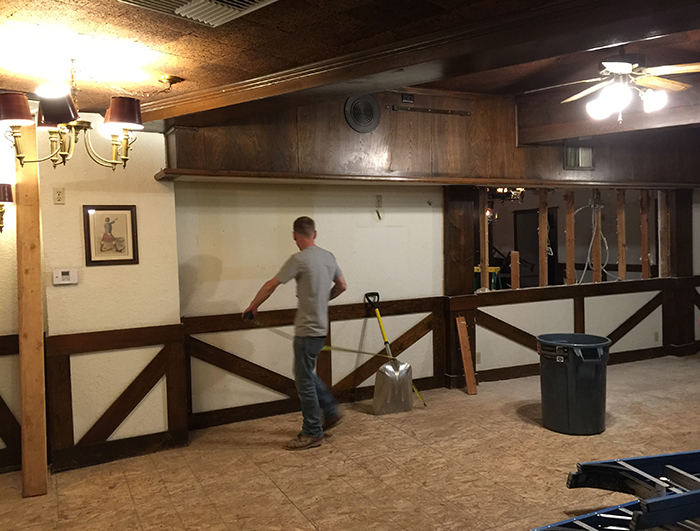 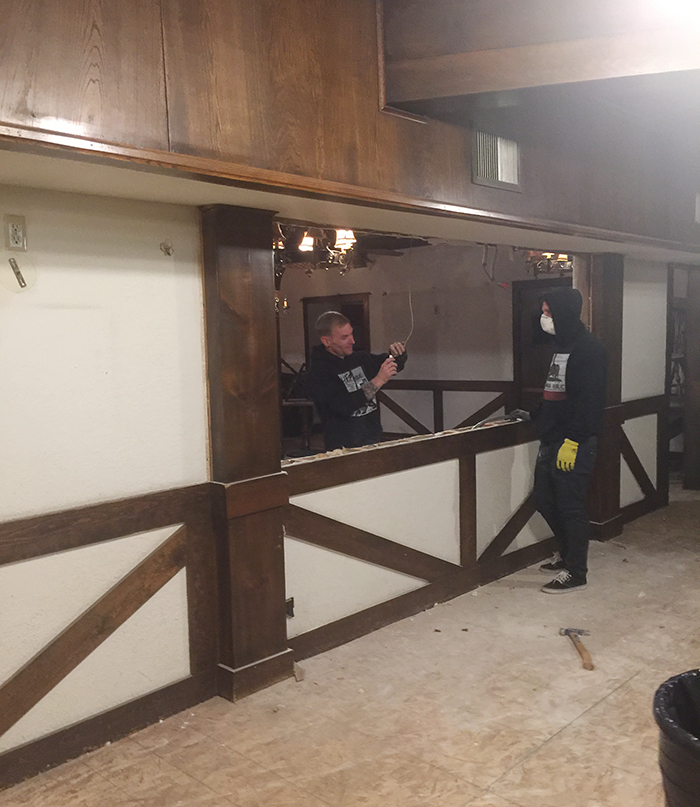 Demo is always fun but there was a LOT of electrical within this wall which needed to be updated and rerouted.

Every single project we started in this old building turned into about 10 more headaches, as is the case with construction and converting old spaces into new, updated and functional spaces which also meet all the new codes. The whole thing was really fun but also really tiring but looking back makes me miss those much simpler times, lol. Being an open and functioning bar/restaurant is 100 times more stressful than anything we had to deal with back then, we just weren’t aware of it yet. 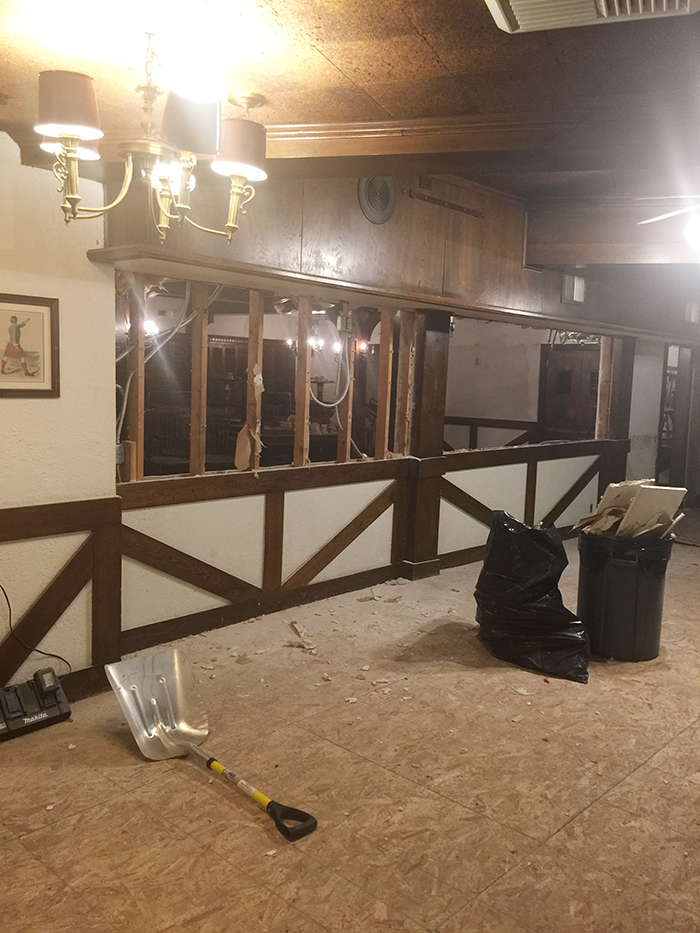 Finally feeling a little flow through the space… 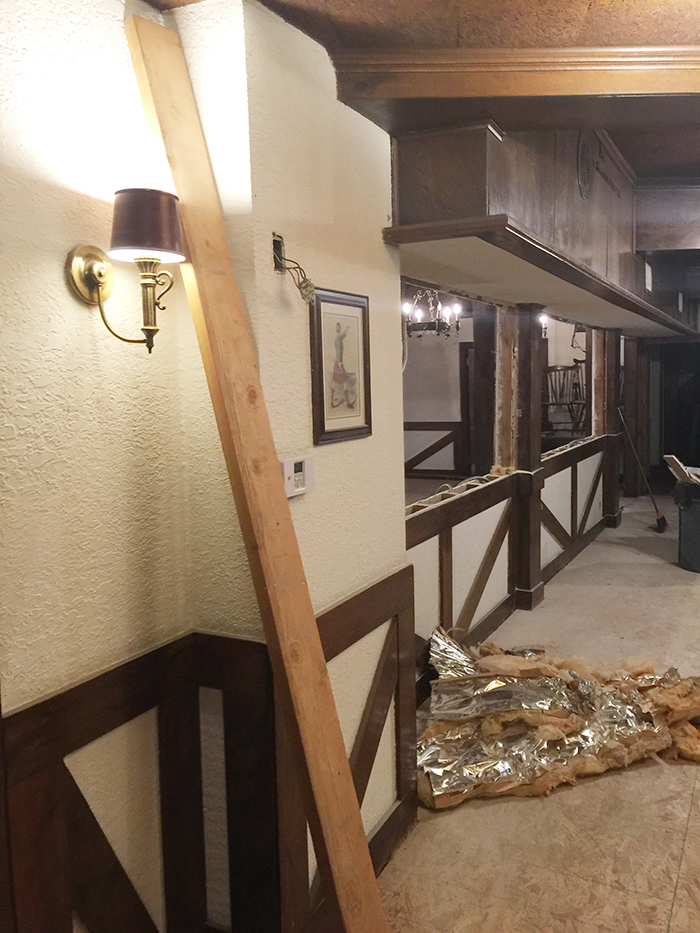 And Boom! Walls are out and we have full access to both rooms! 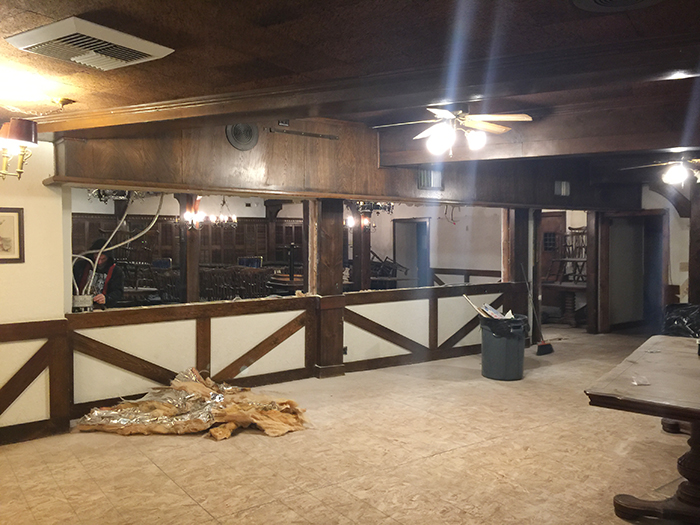 Door opening at the end by the kitchen is widened, re-framed and drywalled. 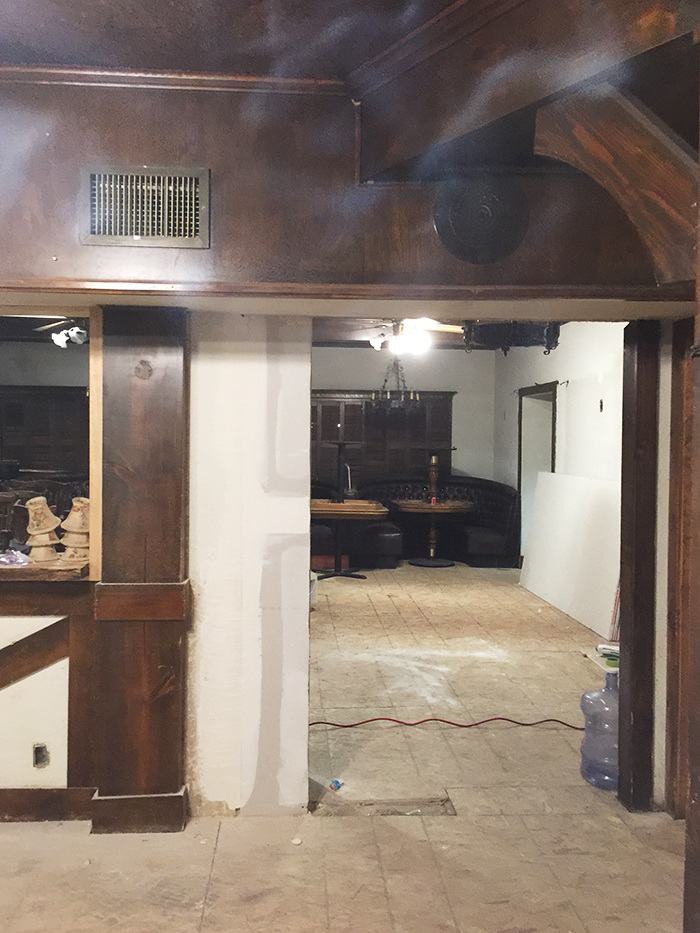 The window openings are re-framed as well and the half wall is strengthened inside for extra support. 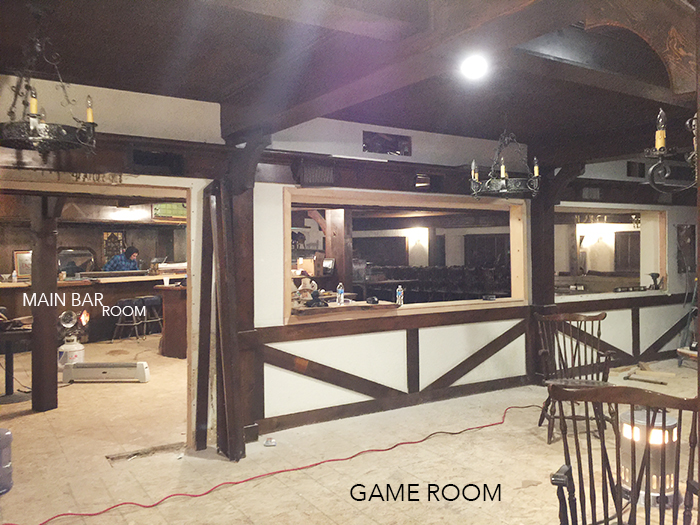 We began construction on this late October, but so many things needed to be done in between and around, so once the windows were out and framed, this section took a bit of a backseat to all the other work that was going on. 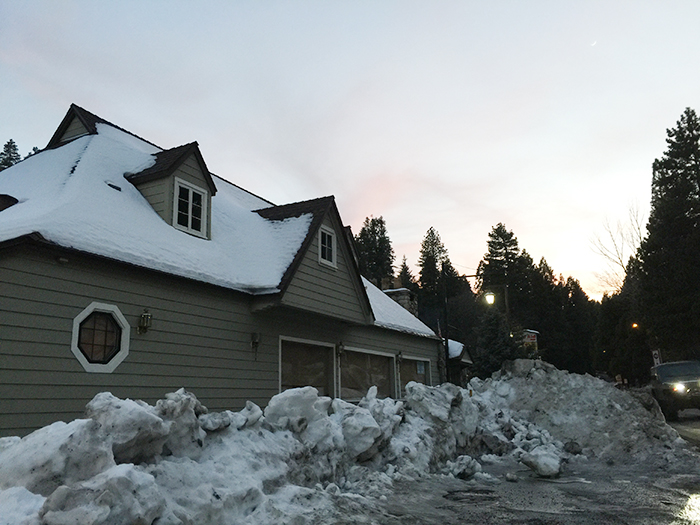 We worked through the winter months without a working heater and with only a few propane tanks warming the area, let me tell you, it was COLD. We were freezing and we worked mostly nights -all night and into the morning on many occasions. I had to wear at least 4 layers on top and a jacket on some nights and we were working INSIDE.

We also had one of the hardest winters I’ve seen since I moved up here 6 years ago -though many locals claim it was nothing compared to winters of the past, but it was A LOT for us, and made the renovation much harder.

This photo was taken on January 30th 2017 and it aligned with the photos as to where were in the renovation process. 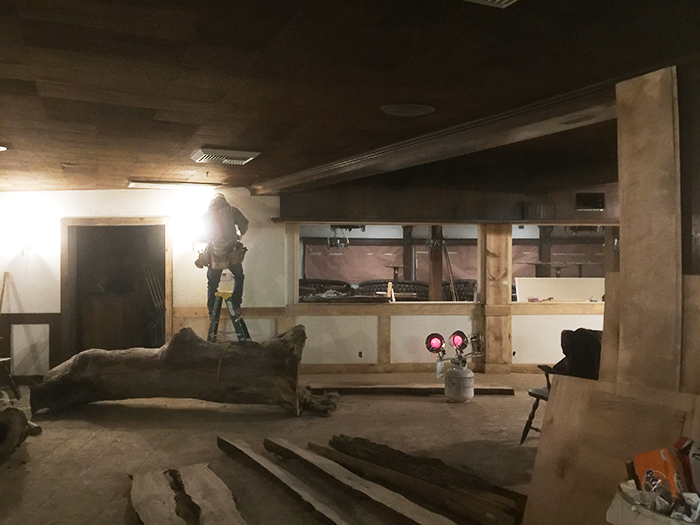 Now you can see a little more progress in the area. The slanted wood panels have been removed from the lower wall and the wood and beams in the main bar room have all been sanded down to natural. 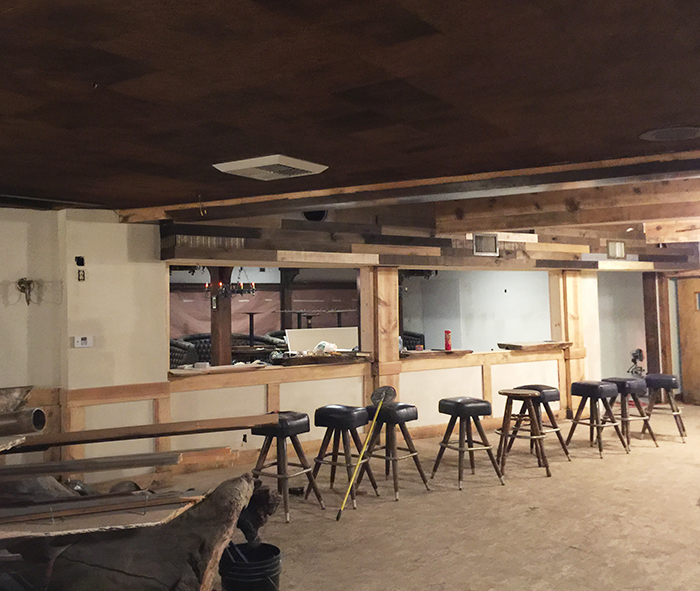 These are the original stools from the Royal Oak, used to stage the area to see how it would work for seating. Though for a while, we thought we may have to use the old stools and chairs based on our budget. 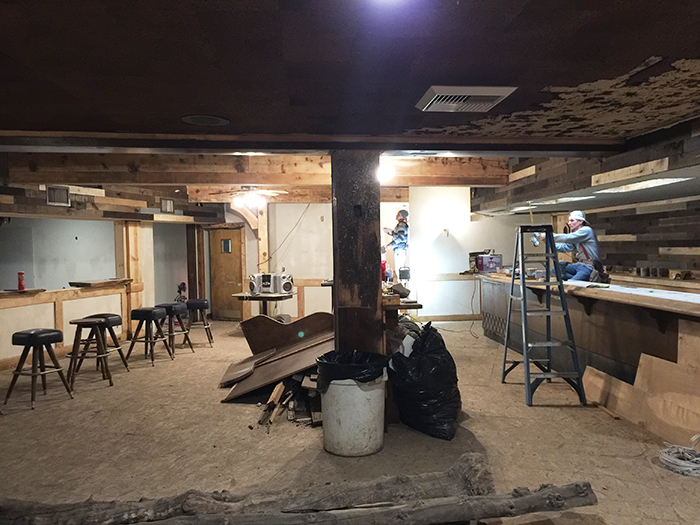 You can see a lot more demo work has been done to the space at this point. I believe it was around February-March 2017 and the textured walls had been smoothed out (we hired out for that), the reclaimed wood had been mounted to the soffit above the open bar window and behind the main bar and soffit above that area as well and I had begun scraping that old nasty cork off the ceilings in certain areas… which even when I wore a mask and goggles, was horribly toxic. 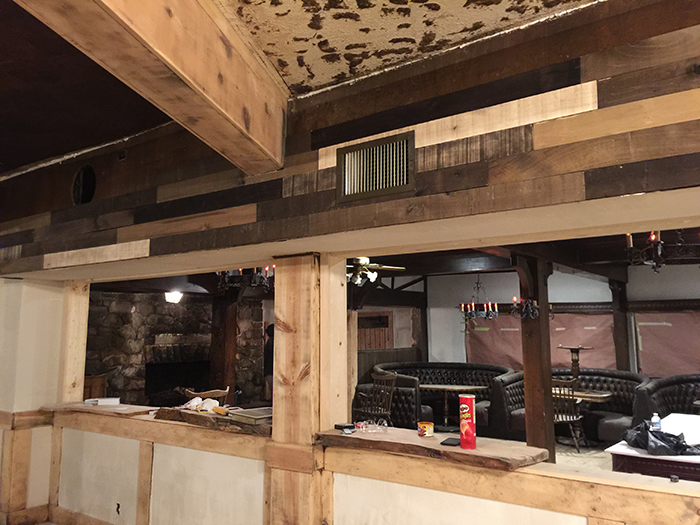 We wanted to use large slabs of wood with raw edges for our bar tops here and if you notice in the photo, we were testing out different sized samples to see what would work the best. 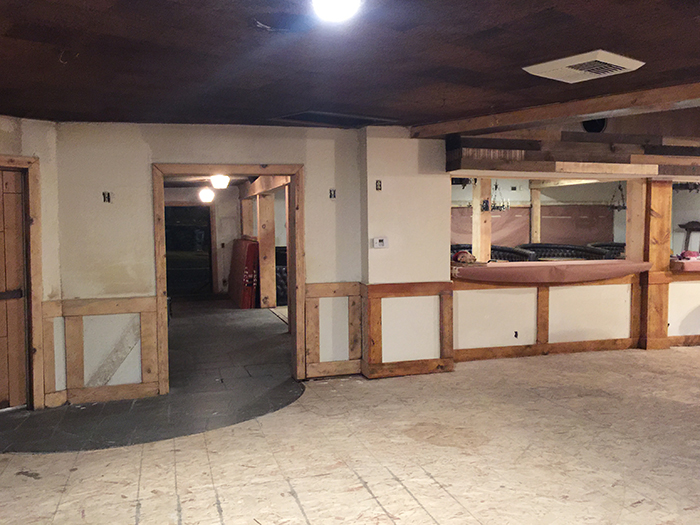 We went through a few different staining techniques until we finally found the perfect rustic-raw-reclaimed wood look with all of its imperfections. 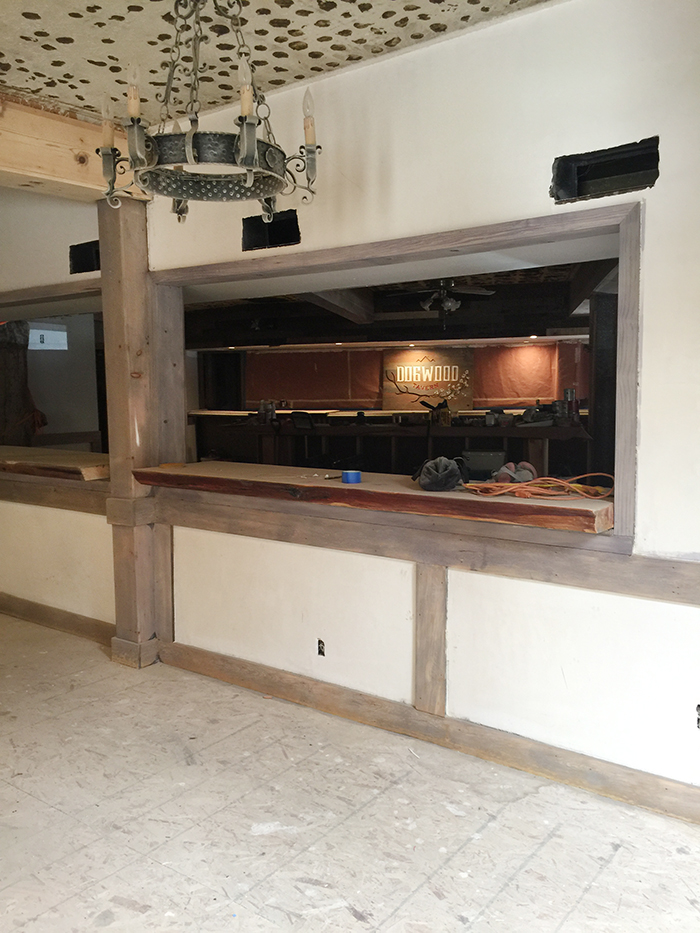 A local wood worker named Keith Knight -who also did our exterior sign and the sign you see in the photo below, created the thick bar tops for us and they are beautiful! 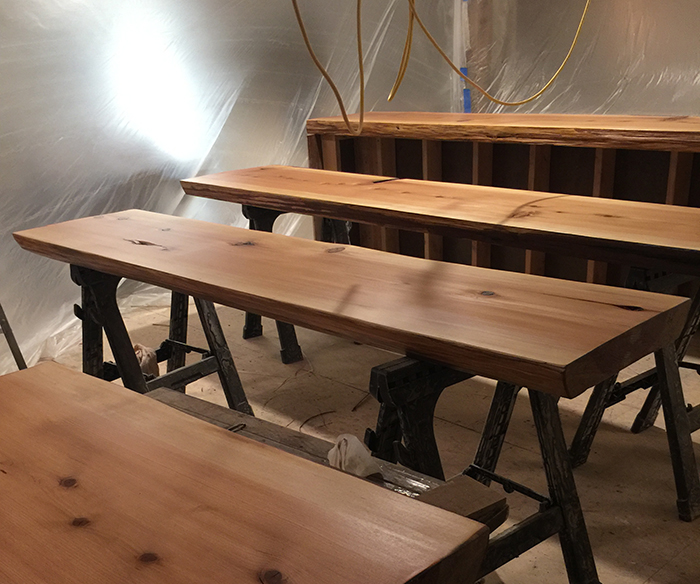 We tried staining them to match our beams throughout but since the wood was different and so new, it took the stain much differently. Ultimately we left them raw and layered on about a hundred clear coats over them to protect & seal them before we mounted them to the partial wall. 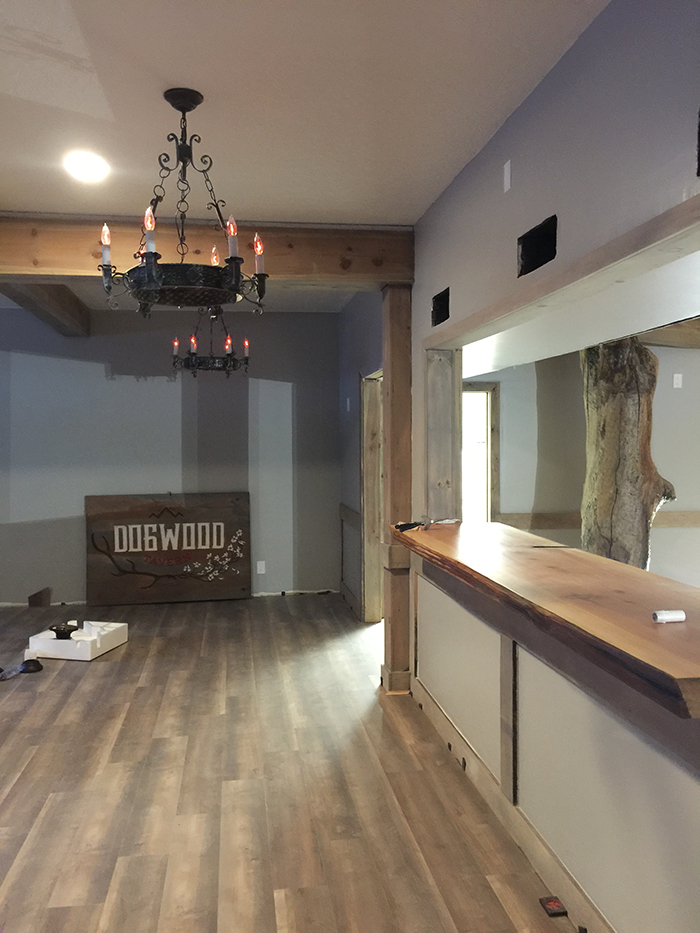 These photos obviously jump forward quite a bit as far as the rest of the renovation is concerned… but I’ll eventually show the entire renovation so it will all line up. 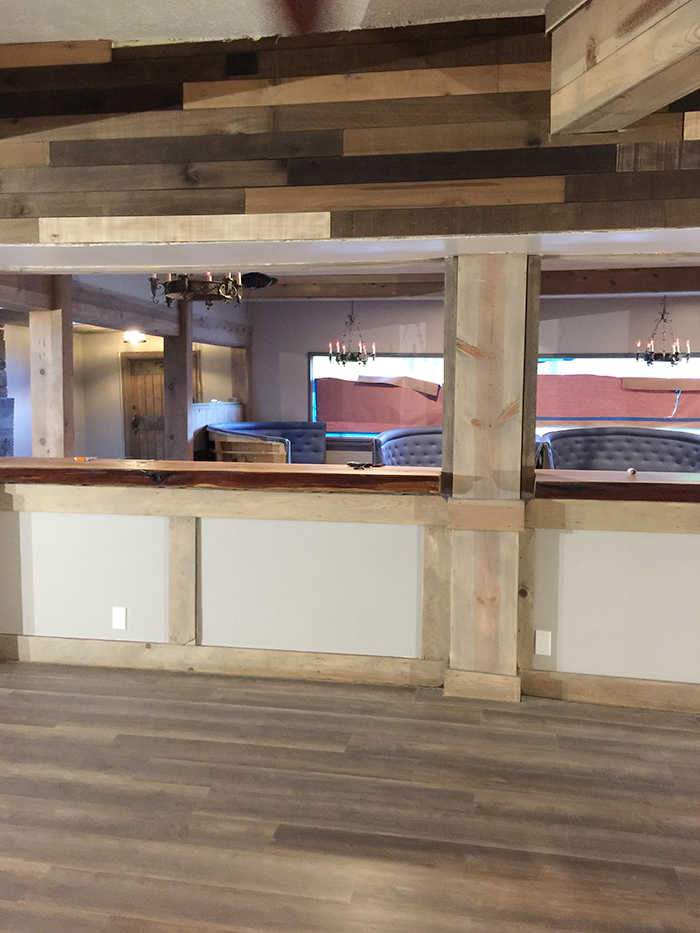 Without giving away too much of the space, since this is just the beginning, here are a few of the final cut out window below – now that we’re open. 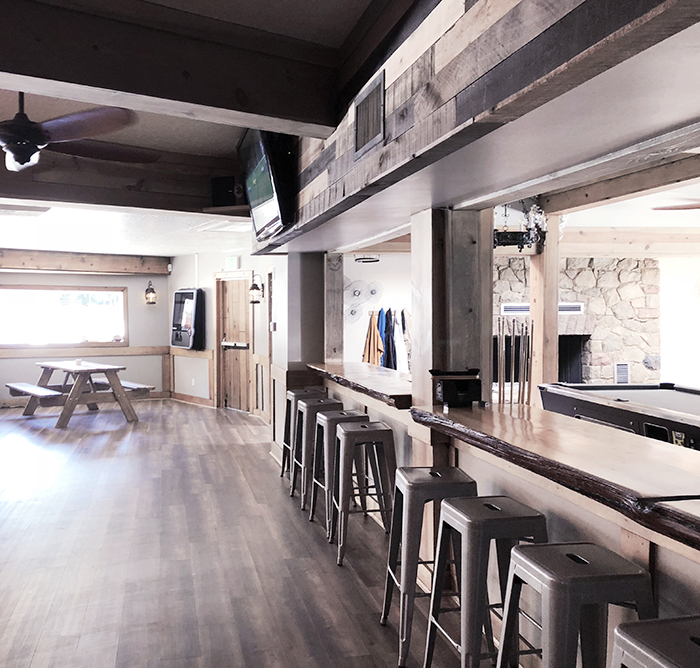 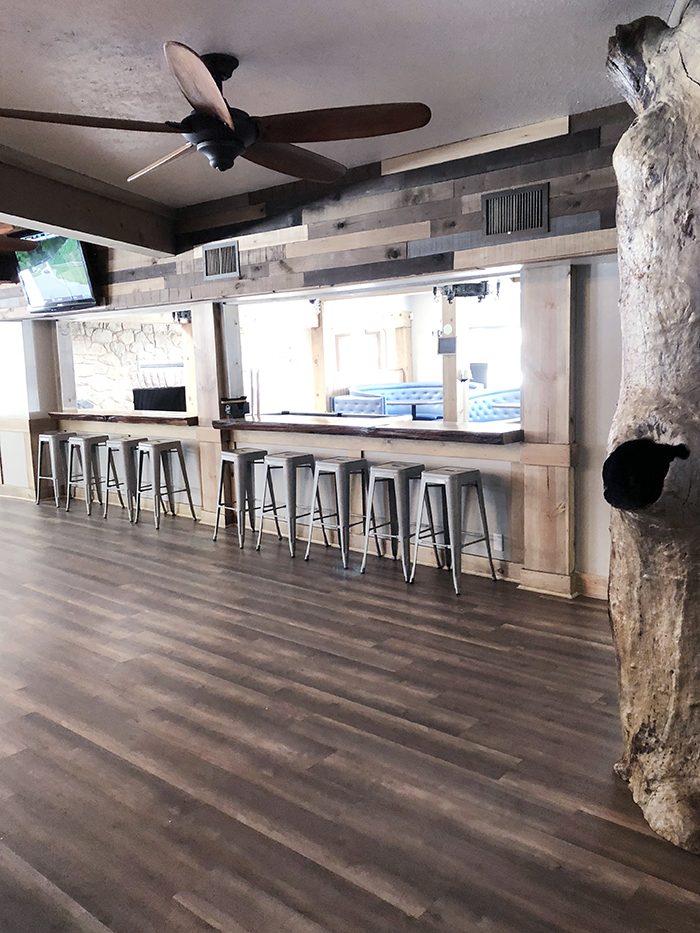 The stools are all from Bay Furnishings, who were a dream to work with! 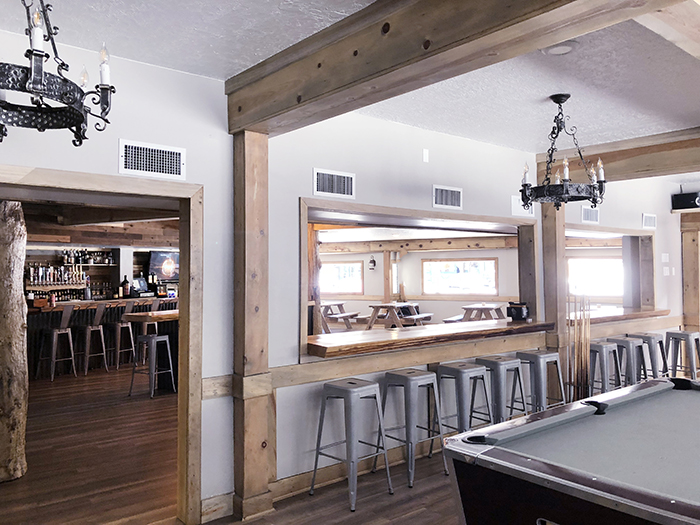 Stay tuned for more before and after renovation posts and check out the Dogwood Tavern / Blog (Events & News section) for more in the future as well. You can also find us on Facebook and Instagram or up in the California mountains, so come up for a visit!

Here I am in my Outlander meets Military Regime me