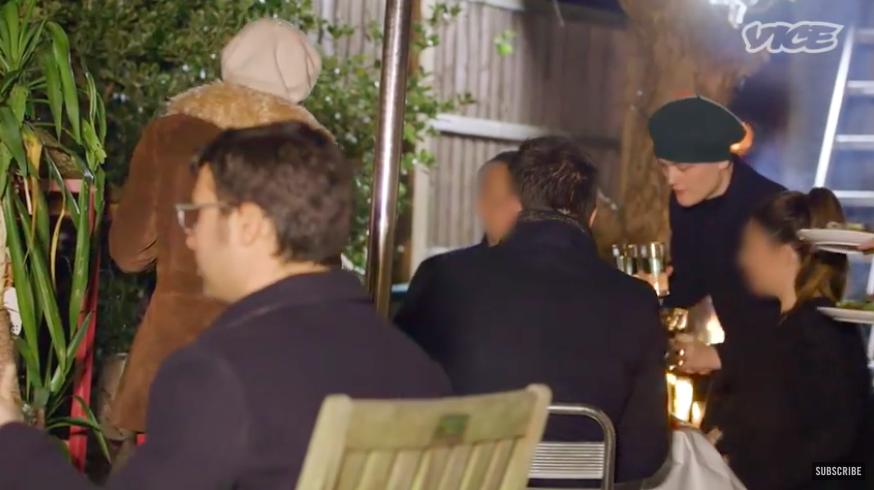 ….and totally effed up… but brilliant, nonetheless.

So opening a bar/restaurant I knew we’d be vulnerable to getting horrible reviews on yelp and Facebook. Whether the reviews are legit or not, they exist and whether we are perfect on every level as far as our standards are concerned, we know that we cannot please everybody, that people have bad days and take them out on us, and that occasionally, being human, we are not perfect and don’t react 100% every time a customer loses their shit on us.

We’ve been open just under 5 months and have already had our share of nasty people and their nasty reviews to follow.

But… as you know, being a blogger for over a decade now, I am sort of used to getting trolled on the internet with hate comments and forums and threads written about me and I’ve learned after not handling it as well as I should have in the past, to either A. not look at the reviews and/or B. to really try NOT to take it personally C. to take the criticism as feedback that can HELP the business be better and most of all D. to NEVER respond emotionally… and so I remember thinking okay, I’ll be able to handle it since I have a little experience with it. The difference is that these people aren’t always hiding behind a computer. We have to see them and often deal with them in person and it’s a bit of a nightmare.

I’ve definitely been brought to tears, my business partners have definitely raised their voices, and one of our waitresses has already quit because of it.

Also, there seems to be a very HIGH expectation rate for us… and I don’t know if it has to do with our location, the insanely strange rate of entitlement certain people on this mountain have OR if every bar/restaurant is under the same scrutiny? I cannot know because this is the first bar/restaurant I’ve ever opened, as is the same with my partners. We are new at this. We are still learning.

It’s not like we’re some huge corporate entity like, uh, I dunno Hard Rock Cafe, for instance, that has opened hundreds of locations and has a complete schedule of events and list to get checked off in order to open. I use Hard Rock as an example because when I was 19 years old, I went on not one but 3 different interviews to finally get a job as a server and open the Hard Rock Cafe in City Walk and I know the levels we had to pass just to get open, and that wasn’t even including renovation. It was intense.

We are not intense. Well, not on that level anyway.

But we have had to deal with some horrible reviews already, and whether they are legit or not, they’re all there on Yelp whether we like it or not. But what most people don’t really understand is that WE ARE NOT A RESTAURANT. We are a BAR… who serves really great food. Maybe I should make that more clear on the website?

There are also TONS of amazing reviews from lovely people who are locals and visitors alike.

In fact one group came in BECAUSE they read a bad review about how expensive our beer was. Now, if you’re in any city, you’d know that ordering a beer or cocktail in a bar will cost you. In fact I think the last cocktail I ordered at a bar in Los Angeles was an apple martini nearly 15 years ago and it was $14 THEN. Our martinis (with well liquor) run about $7-9 (unless they’re a double) and our beers run from $4-8 and so this group saw the complaint on yelp and thought that it IN FACT WAS NOT too expensive for a beer, being from Orange County (and used to spending that much or MORE) and decided to come up and give us a try. I personally waited on them, they were WONDERFUL and in the end, gave us a remarkable review -and I even followed the photographer on Instagram.

That’s how lovely people can be and we are usually full of locals who are like friends to us now, but on the rare occasion someone comes in and had a shitty day, we are the ones they end up taking it out on.

I got an email the other night from the Friday Forward Community, of which I am subscribed, though I don’t always open and read their weekly newsletters. I happened to click on it and the title said Trust But Verify and I clicked back on my inbox intending NOT to actually read it. However, the first sentence caught my eye:

On November 1, 2017, just six months after “opening,” a popular and mysterious new restaurant called “The Shed” became the #1 rated restaurant in London on TripAdvisor.

I went on to read:

Potential customers, enamored by the reviews and captivating pictures of the restaurant’s “mood- driven” food menu, were calling nonstop for reservations. People were devastated when they were told that the restaurant was booked for months.

I HAD to continue reading. My curiosity to learn as much as I can about a business that I am currently in has me researching daily, and this just popped up in my inbox!? I clicked through and continued reading the story only to discover that it was a complete SHAM! The restaurant that had become #1 on Trip Advisor DIDN’T EVEN EXIST!!!

I’ll let you watch for yourself, if you have a moment, it will blow your mind … well, a little anyway 😉 but if it doesn’t, it’s entertaining to say the least!

Tip of the Day: Don’t believe everything you read on Yelp or Trip Advisor or Facebook 😉 or the internet at large. Go see for yourself, and by all means, leave a nice review – or at least a constructive one, so that a business can use it to better serve their customers in the future.

Dressing Up Shorts -with tights- for Work