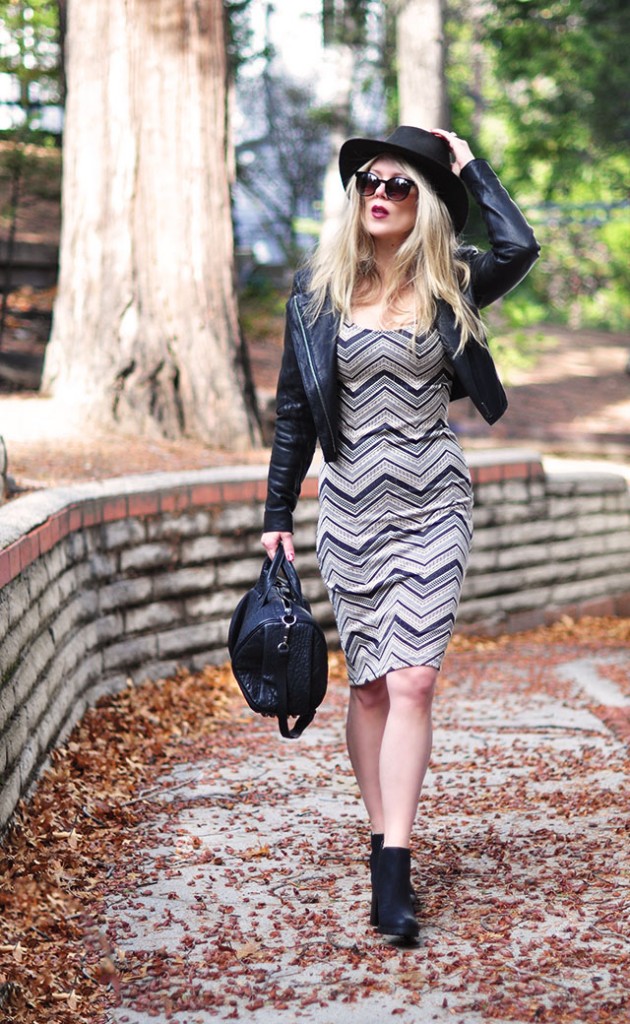 * Chevron body con dress by No Rest For Bridget
* Moto jacket by Helmut Lang {seen here with floral neoprene pants}
* Black/gold ‘Painty’ sunglasses by Thierry Lasry
* Custom Barracuda fedora hat by Spring Canyon Hats {seen in this outfit, this outfit, this outfit, this outfit & this outfit}
* Boots from Target {amazing +so comfy + had an exact replica in the ’90s}
* Black/silver ‘Rocco’ bag by Alexander Wang … I picked this up at the recent blowout sale at Shopbop, though I originally wanted the smaller version, like my white bag, they were sold out by 6am, so I went with the larger version with silver hardware and I am in love. 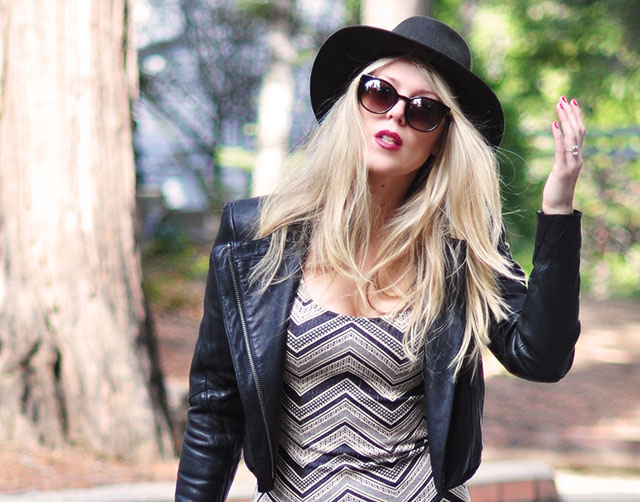 I may or may not have developed an ungodly obsession with One Direction over the weekend, specifically this song, Night Changes… and well, nearly their entire new album, FOUR.

My desktop computer has been out of commission since May. It’s been sitting in my closet taking up valuable handbag real estate while I used my older iMac and Macbook air to work. This new tech kink had me working from the living room more often than from my office, and in those afternoons, I may or may not have had E! on in the background hoping for Sex and the City reruns to serve as my soundtrack.

In between SATC episodes, I may have caught a few E! News specials, and on one particular afternoon they interviewed One Direction {in Florida I believe}, which I was admittedly barely listening to, where Harry {whom I did not know until that very moment} was asked about his hair and when he referenced the Friends episode where Monica’s hair is inexplicable while playing ping pong with Paul Rudd – and I couldn’t help but look up. First, because anyone who references Friends is obviously awesome, and second because I’m pretty sure Harry was a wee baby when these episodes were fresh on the tube, rather than graduating high school as I was.

A week later, One Direction performed this song, Night Changes on the AMA’s and I was like okay, I get it Directioners, you’re right, they’re totally swoon worthy. A few days after that I watched a Jon Stuart episode in which they referred to “One Direction Pigs” in a Great Debate, and when I finally got my desktop computer back from the Mac store last week and was able to listen to my iTunes radio again, YAY, their song, Night Changes randomly played and it made me stop what I was doing to listen…

Needless to say, I purchased the album and have been obsessed all weekend long. This song {Night Changes} is still my favorite, but they’re all damn good and you know why I love them the most? They all sound like a song I’ve already heard from the the last four or even five decades OR have similar sounds, melodies, beats, etc. but somehow are produced to create a new and different and fun sound, which obviously I adore, because duh. I hear influences of Fleetwood Mac, Simon and Garfunkel, U2 here and there, and even a few random 80s hair band riffs. Seriously, I love trying to place where I’ve heard what sound before.

In passing, the husband asked me how many times I’d fallen for “boy bands” not including the Beatles {since they were technically before my time – but obviously amazing} and though I brought up The Jackson 5, the real answer is FOUR: New Edition, New Kids on the Block, *NSYNC, and now One Direction. And suddenly I feel like a giddy thirteen year old girl again… {and really old at the same time}. 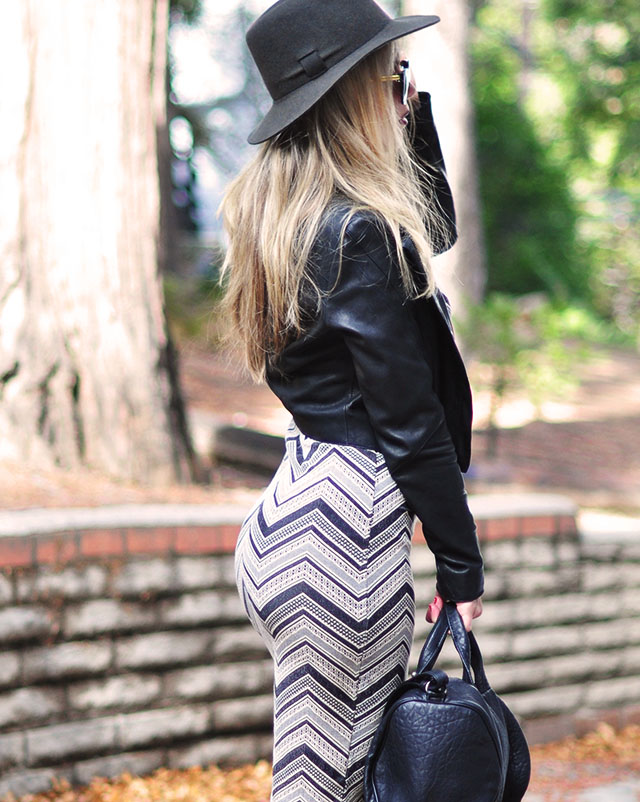 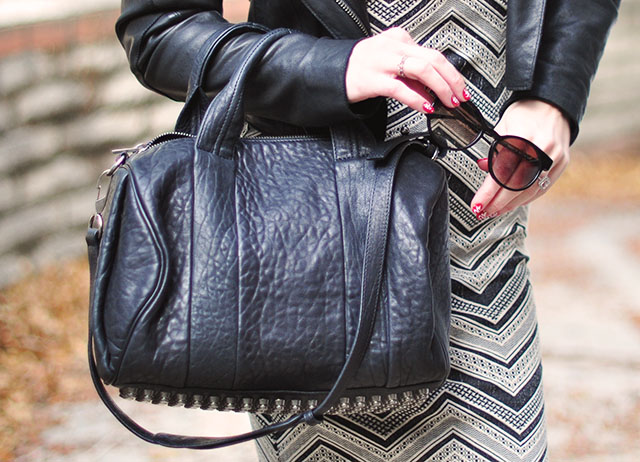 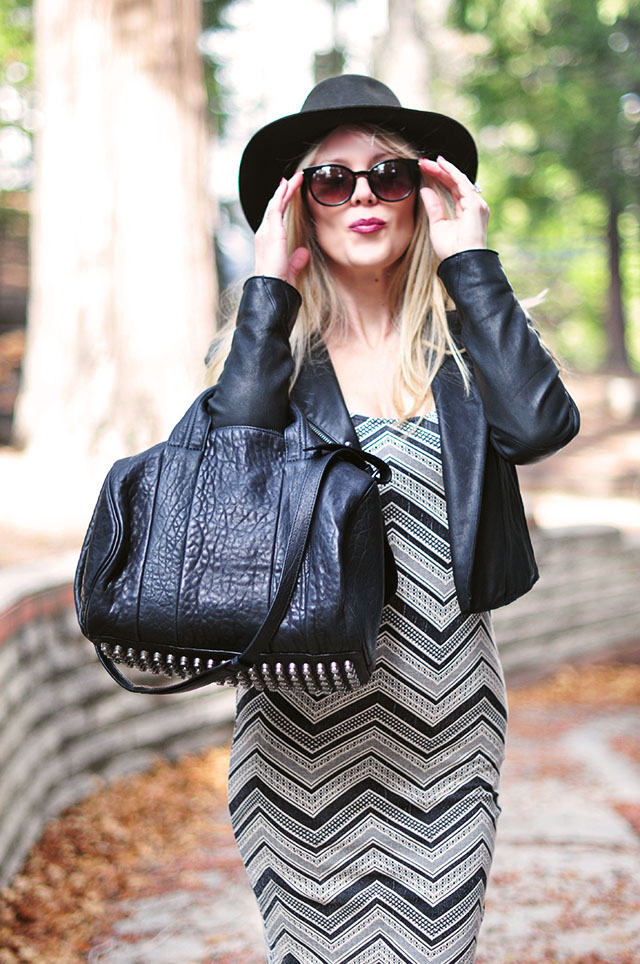 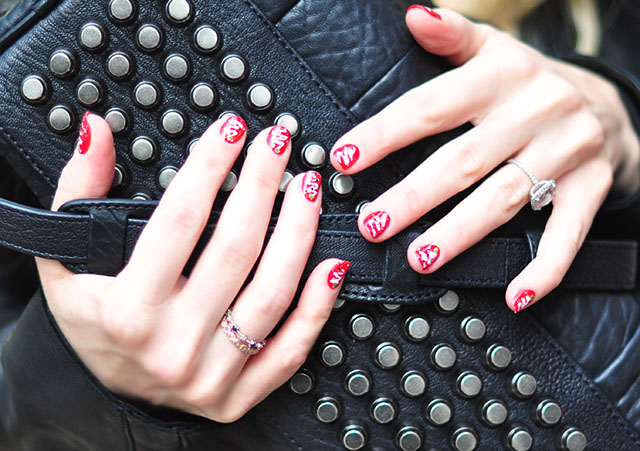 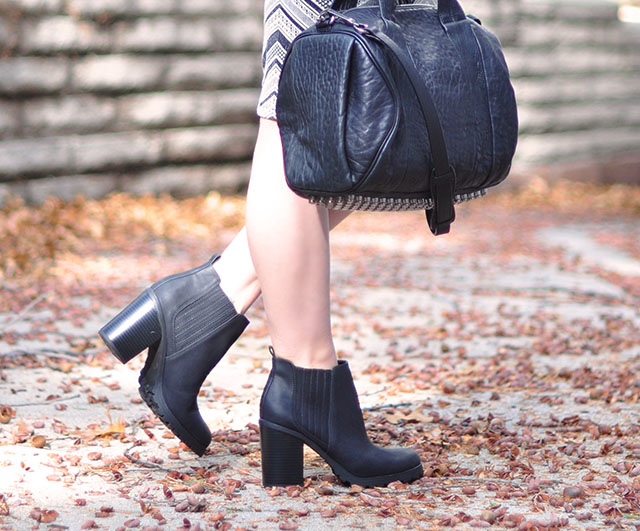 * Find all my outfit posts here

yes, imac @ work again I need some serious salon time. LOOK AT MY ROOTS! Not to mention the unruly length of my hair!…