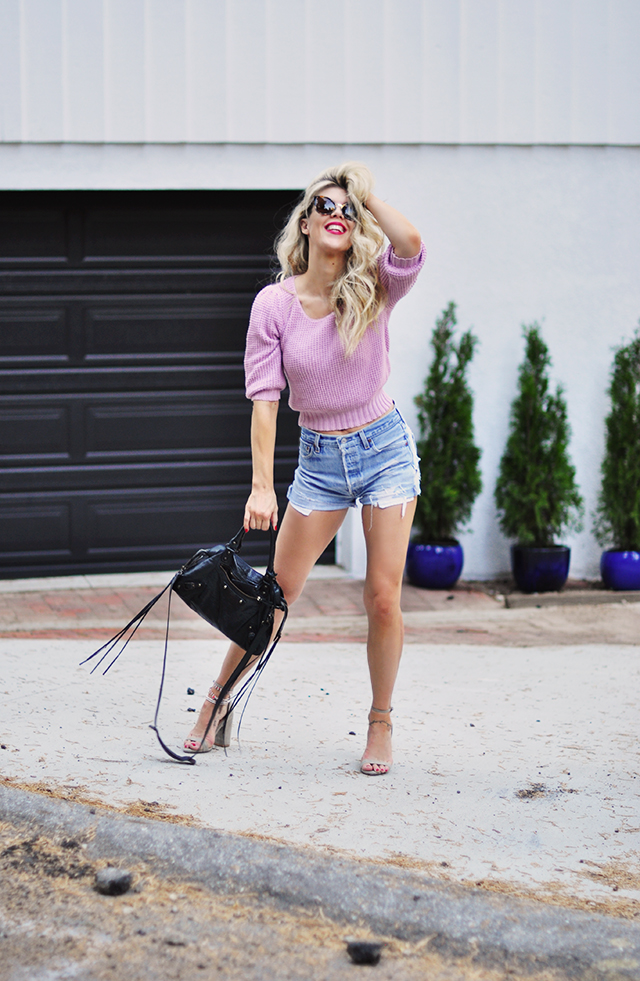 * Vintage Levi’s cut right off… just wore them recently here
* Vintage pink sweater, I’ve had for a hundred years
* Butterfly sunglasses by 3.1 Phillip Lim {obvious faves}
* Balenciaga classic town bag
* Suede ankle strap sandals by Raye … which used to have a cute fringe detail around the ankle but I cut it right off because I never wore them with it. And now I do.

* Title: Hailee Steinfeld & Grey – STARVING feat. ZEDD… The more I know you, the more I want to… Don’t need no butterflies when you give me the whole damn zoo… right away, right away, you do things to my body… I didn’t know that I was starving til I tasted you.

When I started sharing my outfits here back in 2008, I used the camera on my desktop computer at the art gallery I worked at, set the timer, backed away from my desk and captured my daily work outfits, – and the glorious SHOE SHOT – all before the boss showed up in the morning. It was lucky for me that he was generally late. And then when I realized my outfits were something you guys wanted to see more of, and I got brave enough to shoot outside where possible passersby would watch, I used a little digital powershot camera, wherein I also set the timer, ran to position, took three shots, and went back and forth until I had enough photos to work with. I’d usually pull over somewhere in the canyons or on Mulholland to shoot on the way to or from work or I’d find an architectural spot behind the building at the art gallery.

In 2011 I finally upgraded my camera but lost the use of the timer {because the 50mm lens makes it nearly impossible to focus without a human} and had to have someone shoot my outfits for me.

I began with my brother, since he knew how to use the camera best, but once he taught me a few things and I finally figured out how to get the shots I wanted from my camera, basically, anyone could hold it and shoot, as long as I chose the location, made sure the lighting was right, and directed the shots. So for the past few years, my husband was shooting my photos for me… and if you’re a fashion blogger, this may sound familiar; HE FUCKING HATED DOING IT and it would almost ALWAYS end in some sort of argument or fight. EVERY. SINGLE. TIME. And when I look back at the photos, I can see the angst in my face, and I was constantly trying to rush through the shoots and finish, while trying to get the shots I needed to work with, so that he could go back to doing whatever he was doing before I asked him to shoot with me, which was, most probably, playing video games.

So when he left {almost 5 months ago now}, I wasn’t sure how I was going to get my outfits shot, or if I’d have to hire a photographer, but with my mom living up here now most of the month, I asked if she would be willing to do it. And of course, she said yes, because that’s what mom’s do… So I was happy to have someone I could rely on to help me.

I taught her how to use the camera on the settings I like for my photos and really, within about 3-5 different shoots, she was already getting comfortable with it, as was I. She shoots all my outfits now, and we have a BLAST doing it and she’s willing to go to different locations with me and do just about anything I ask, and I think it all shows in the photos… WHICH MAKES ME SO HAPPY, I can’t even tell you. She tells me when a pose looks weird and hilariously yells things like LOOK AT THAT ASS! Woo! Which just makes us both break down laughing, because WHAT, MOM?!?!

The outfit shoot struggle was real for about 5 years, and now it’s finally fun again, as it was fun when I was doing it myself and giggling, running into position after setting the timer. I really only wish I asked her to do it sooner, because it’s making SUCH a difference all the way around. And then, as an added bonus, we get to hang out after and chat for a while and spend quality mother-daughter time together. It’s really a win-win and I’m so grateful to have her here. 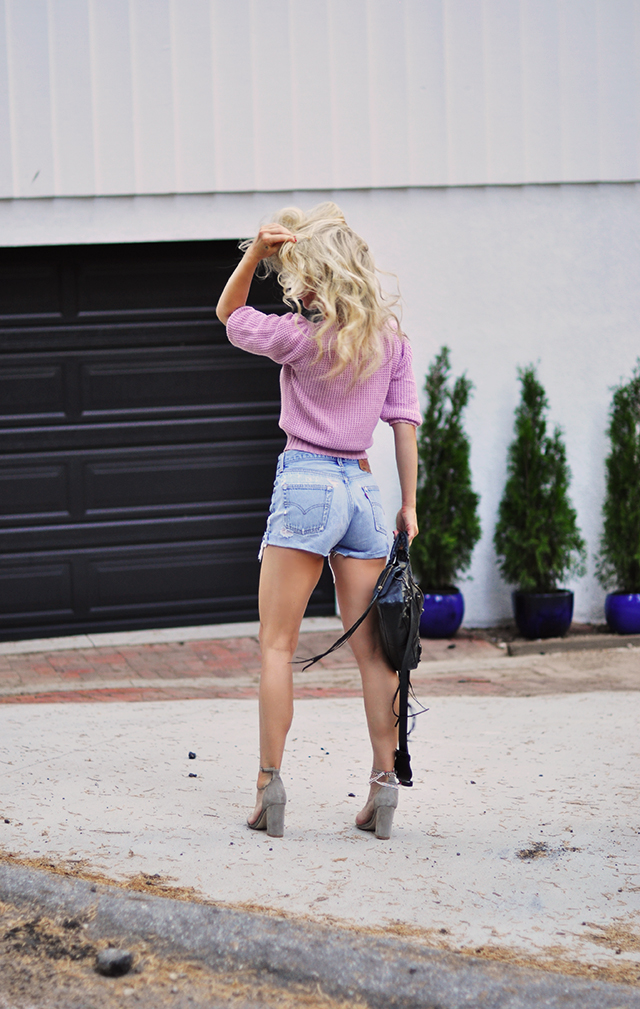 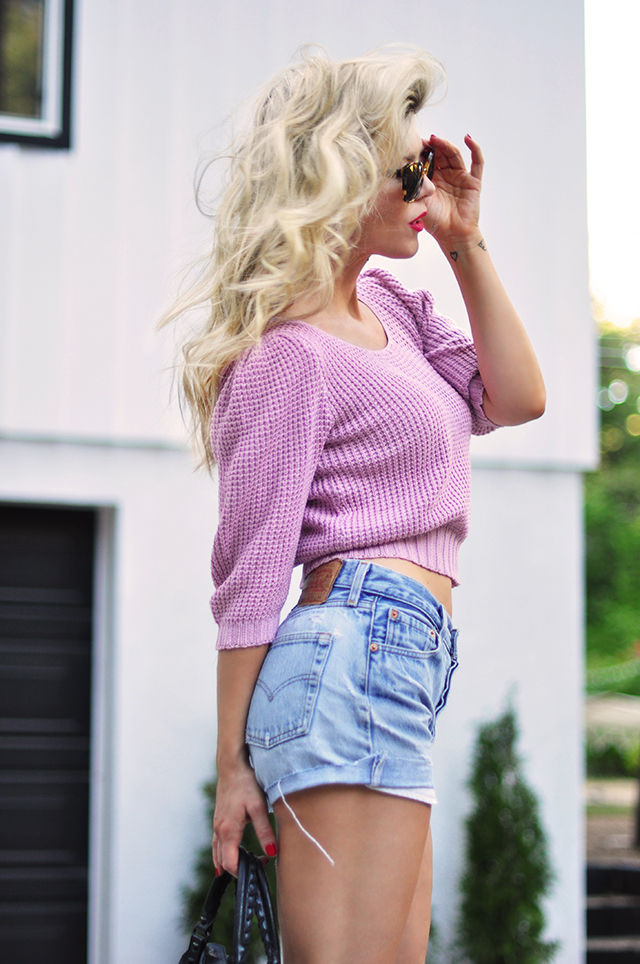 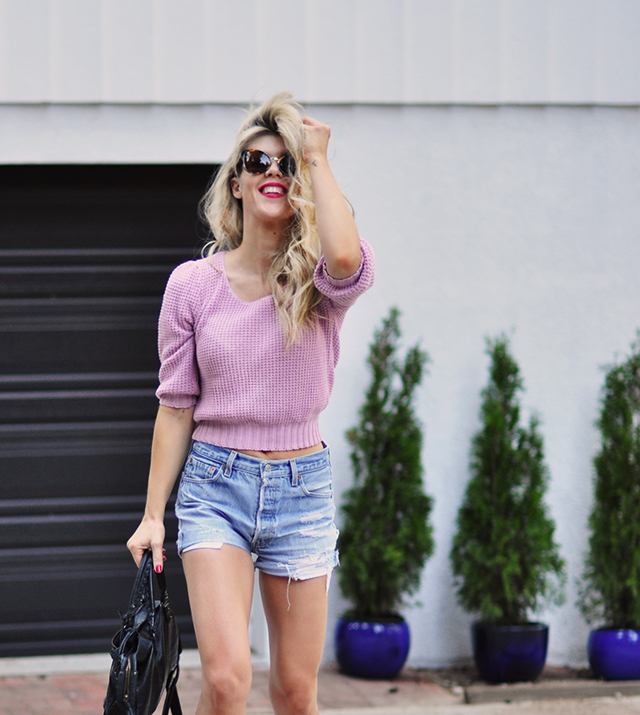 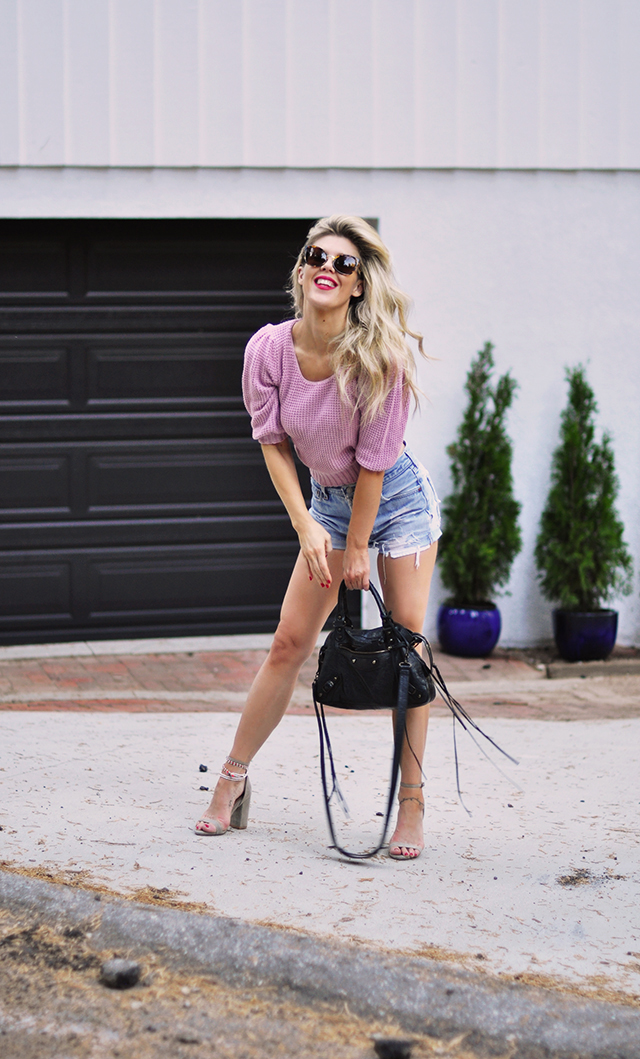 * Recipe by guest contributor Laney Schwartz, creator of Life is But a Dish How it is MAY??!!?? I can’t believe we’re already here!…