Because omg I love sweets and because I’m trying to eat less of my favorites just to be healthier and because I NEED alternatives to my favorites because like I said I LOVE SWEETS, so here are a few I’ve been loving.

Okay so, if I’m getting dessert, it’s going to be chocolate ice-cream. It’s my favorite thing on the planet. Not all ice-cream, just chocolate ice-cream, and mostly Haagen Dazs, and when I get it {meaning, when the husband buys it at the market for me even though I tell him not to} I eat it all. And if I happen to get a half-gallon of some generic version because the good stuff was sold out, even that fluffy air-filled excuse for chocolate ice cream will literally be gone in two days flat. I cannot help myself when chocolate ice-cream is in the vicinity. I am an addict, a chocolate ice-cream junkie, and so my best plan is just not keeping it in the house. 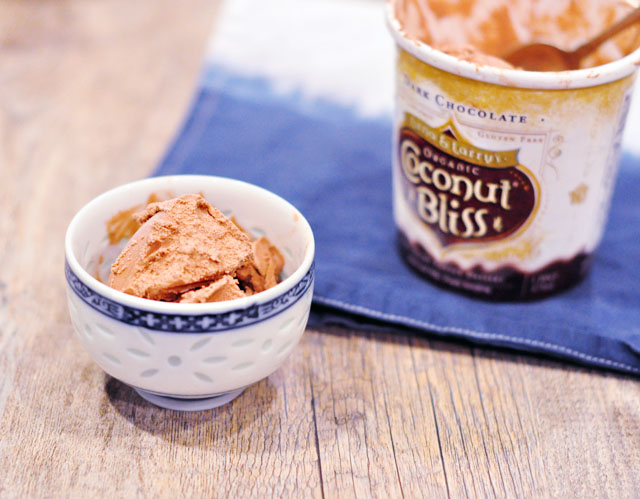 But in my attempt to eat less sugar and chocolate ice cream, I’ve found I’ve been eating more of EVERYTHING ELSE because I’m not quenching that chocolate ice cream craving, and that’s not any healthier at all. So I found this Coconut Bliss Dark Chocolate ice cream by Luna and Larry, which has less sugar, is dairy-free, and all around healthier than regular ice cream. And here’s the thing: it’s really good… but not SO GOOD THAT I EAT THE ENTIRE CONTAINER.

It does have a coconut taste, which is surprisingly good, and uses Agave sugar {which I know, reacts and breaks down the same as regular sugar} but overall, it’s healthier and obviously better than me eating an entire pint or half gallon in two days. You can read all of the nutrition facts here.

My favorite coffee drink is an ice blended mocha from Coffee Bean. However, being that we have no Coffee Beans up on this island, Starbucks and the local coffee shop are my only alternatives. And what makes me choose Coffee Bean over Starbucks is the fact that they use powder in theirs vs Starbucks who uses syrup. I just prefer it. But alas, I’ve been getting Starbucks lately because it’s my only option. And in my attempt to consume “less sugar” I tried their “sugar free” version, but I HATE the taste of fake sugar like aspartame and splenda — I can feel it in my throat for hours after consumer and it drives me nuts and gives me stomach cramps as well. So yuck yuck yuck. I’d rather have the real sugar in moderation… but it’s summer and moderation is out the door when it’s warm and a cold ice blended mocha frappaccino sounds so delicious. 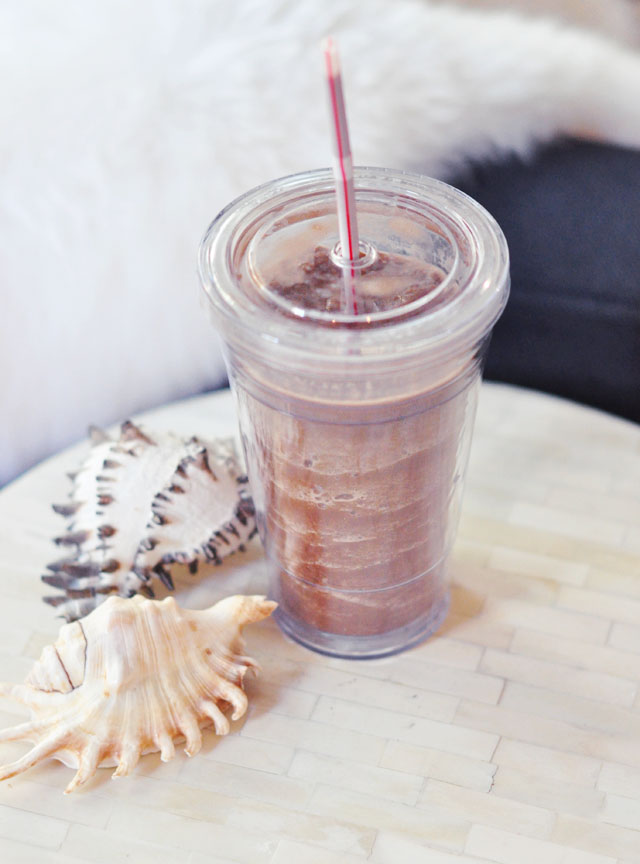 So I tried to make my own… and it actually tastes pretty good. It’s not as sweet, since the only thing I use to sweeten it is a banana which also kind of gives it a banana chocolate flavor, I can get past it pretty quickly as I slurp it down.

I think it’s a good alternative. 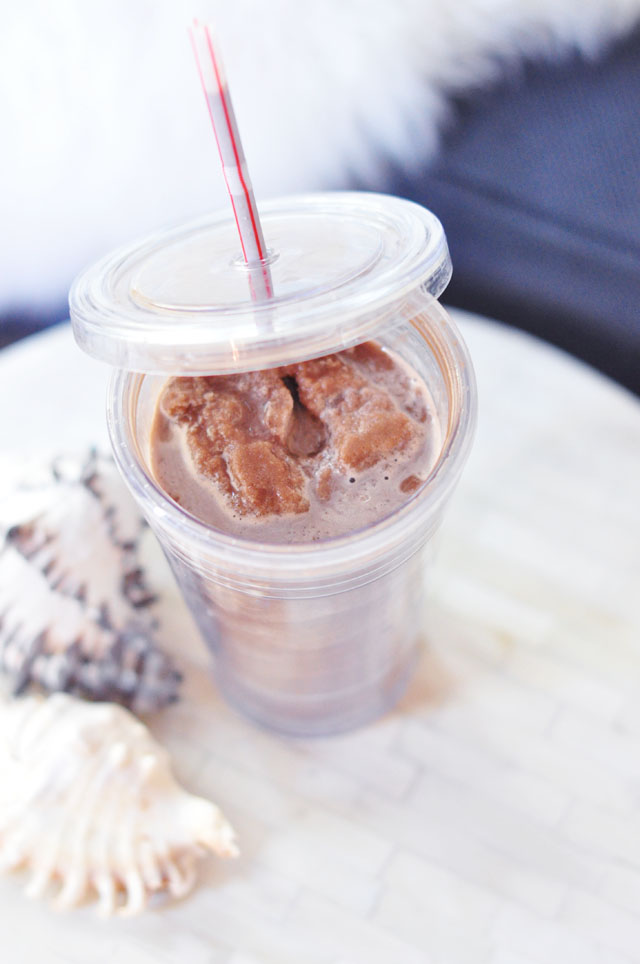 Toss it all in a blender and mix until you like the consistency.

I just got Sweet Leaf Sweet Drops, so I may add this to make it a bit sweeter.

Okay, this is admittedly better than the last time I made it… mostly because I created it more for the purpose of dessert than breakfast. 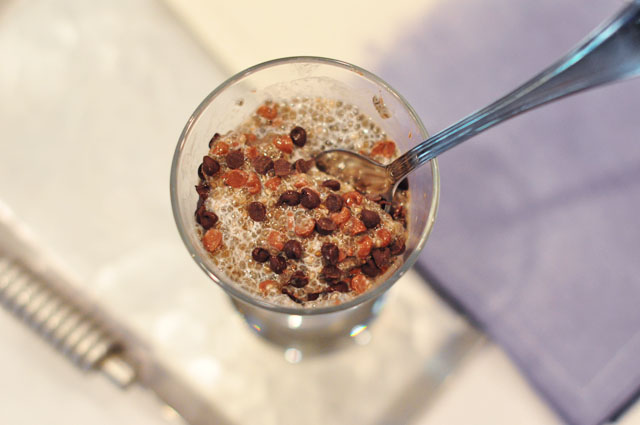 BUT FOR THIS ONE I used coconut milk instead of almond milk {because I am not a fan of almond milk I have concluded} and I did NOT include maple syrup but instead, as I was whisking it, added semi-sweet mini chocolate chips for my chocolate/sugar addition. Then after it was ready, I added a few more mini chips to the top. The chocolate chips made it feel more dessert-like and tasted way better too. NOTICE the lighter chips? They are the ones that I whisked in and set overnight and became soft within the pudding… then the fresh chips on top added a harder texture to the pudding.

As a kid, my grandma always kept a tupperware of sugared strawberries in her fridge and they were delish! Mostly though, I don’t think fruit needs additives to be good. HOWEVER, I also don’t consider fruit to be a dessert, so this was my attempt to trick myself into thinking that fruits can be just as tasty as ice creams for dessert.

It was omg delish, but I have yet to convince myself it’s better than ice cream. 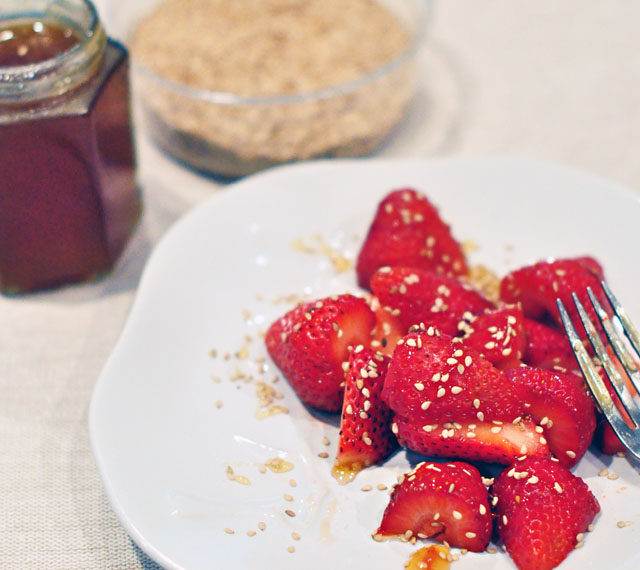 Simply wash and cut your strawberries, drizzle honey over them and sprinkle sesame seeds on top. It’s strangely delightful.

My favorite probably because they have the most sugar, but is still more healthy than regular brownies… 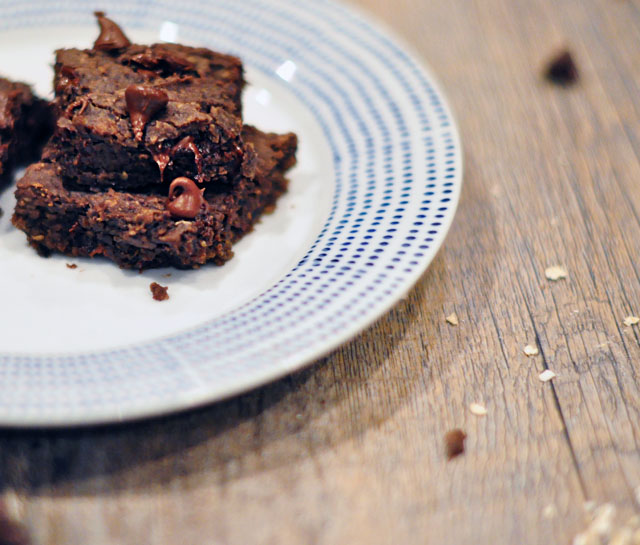 * If you have any great recipe links to low-sugar chocolate-y desserts, PLEASE leave them in the comments 😉 The more the merrier.

I’m currently on the hunt for the perfect woven lace-ups for Summer. What my closet is begging me for at this very moment is…