Last weekend I found a hydrangea bush with full white blooms on the side of our house. It’s the side of the house I don’t frequent often so I hadn’t noticed it. The last time I was over there it was just a bush of green leaves I didn’t pay much attention to …but since my discovery I think I’ve been back 3 times cutting more blooms off. I figure why not enjoy them in the house? …even if my snipping sends it back to drab green bushery, no one sees it anyway. They last quite a while in water and are so full you really only need one or two to fill a vase.

In the Master Bedroom:
In my Kate Spade decanter

…a wedding gift I’ve used as a vase since opening 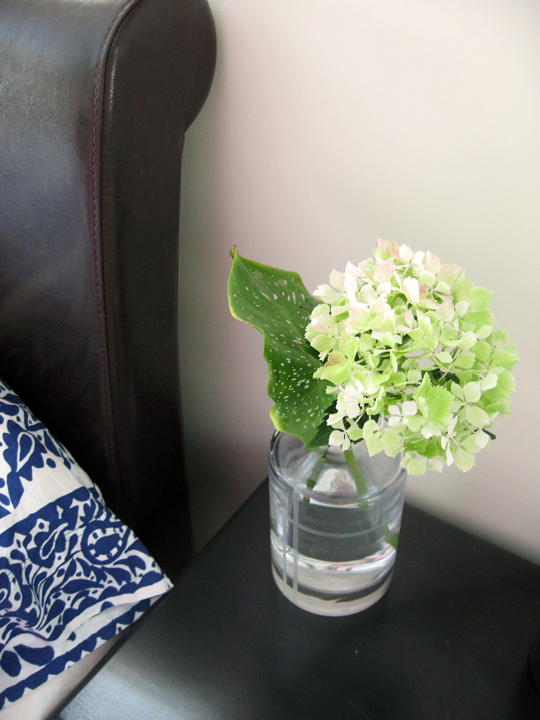 On the Dining Room Table:
In an old Pottery Barn glass vase {found at a thrift shop} on an Octagon Mirror Tray 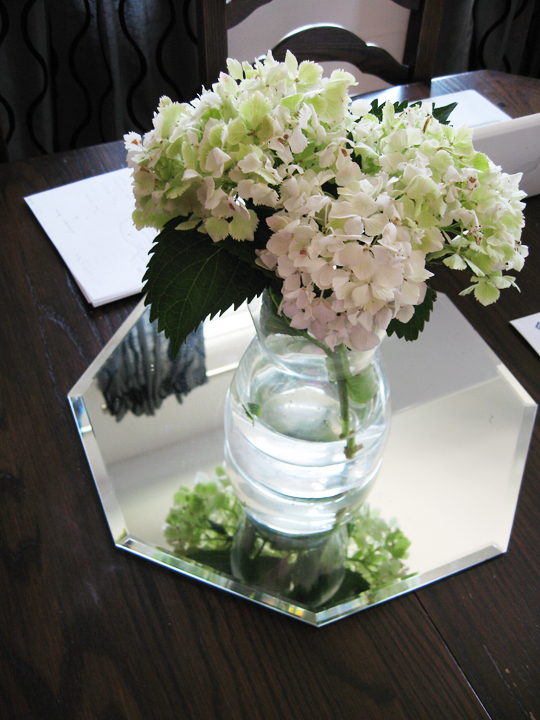 In the Kitchen:
In an antique {1949} MWF Ikora silverplate vase that was my grandma’s {WOW just found one on Ebay listed for $129 – man I love the internet} 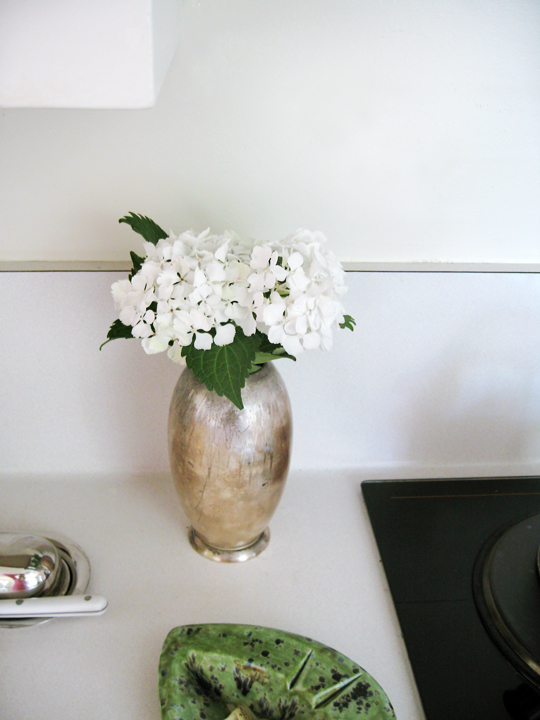 And in the Brick & Blue Beach Bathroom:
In a small fishbowl style vase with river rocks at the bottom. 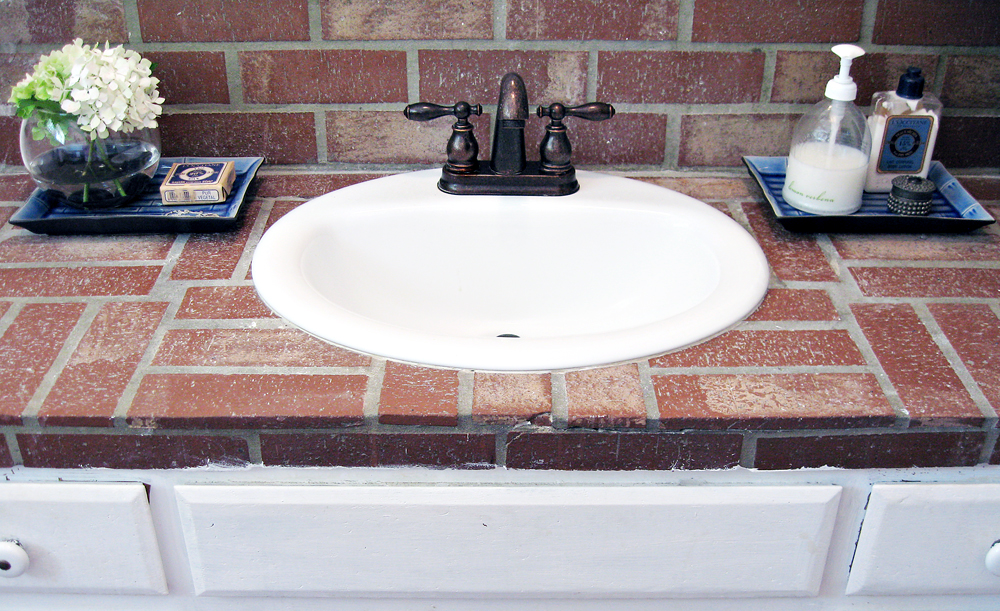 My mom gave me these two lovely blue ceramic bamboo rectangle trays for my birthday and they’ve been sitting on my kitchen counter ever since. I’m not sure why I didn’t think of using them in the bathroom sooner …maybe because they’re not typically “beachy” but the watery blue glaze is a perfect match and I love them on the counter keeping everything in place.

On both trays I’ve used old and original L’Occitane soaps & creams because I just love the way the packaging looks in this bathroom. A shell might be a nice touch but for now I’m loving my silver Tiffany lock necklace and old tarnished pewter trinket holder as a finishing touches …and if you can’t tell, I’m all about groupings of 3’s. 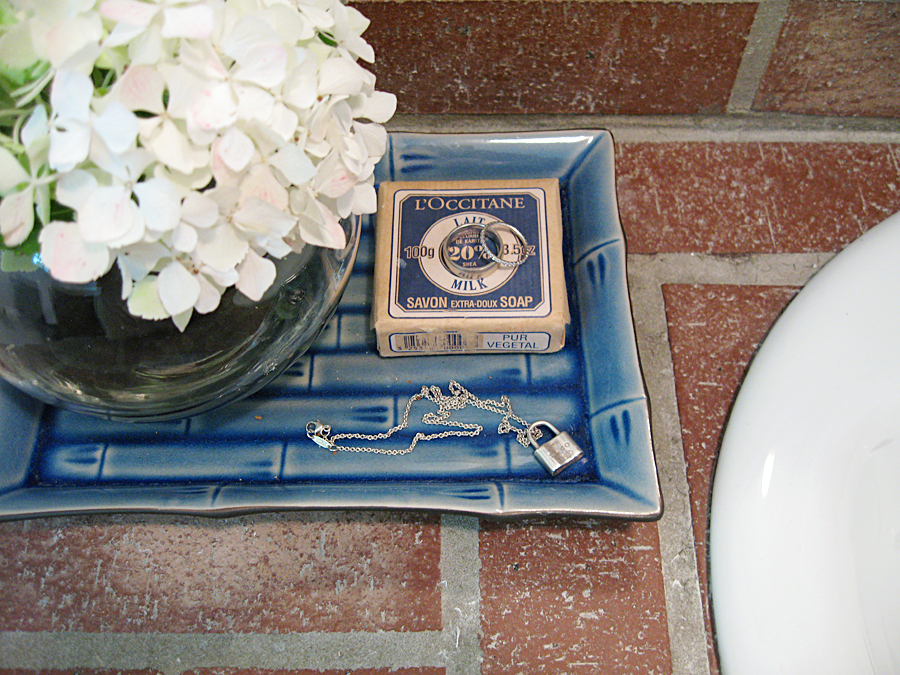 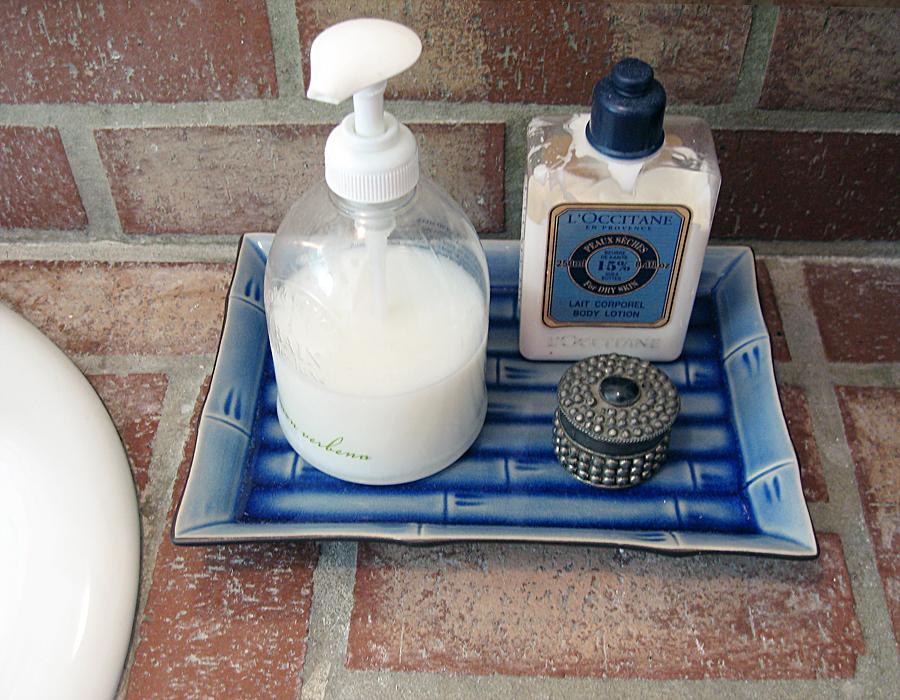 A few other details:
I’m really enjoying the new leafy palms in the backyard …and not just when I’m in the backyard but when I open the shutters every morning in our master bedroom. They really add that tropical vacation-y feel I was searching for. Though I’m still yearning for more larger leafy banana plants out there. I only wonder if they’ll be able to take the summer heat. 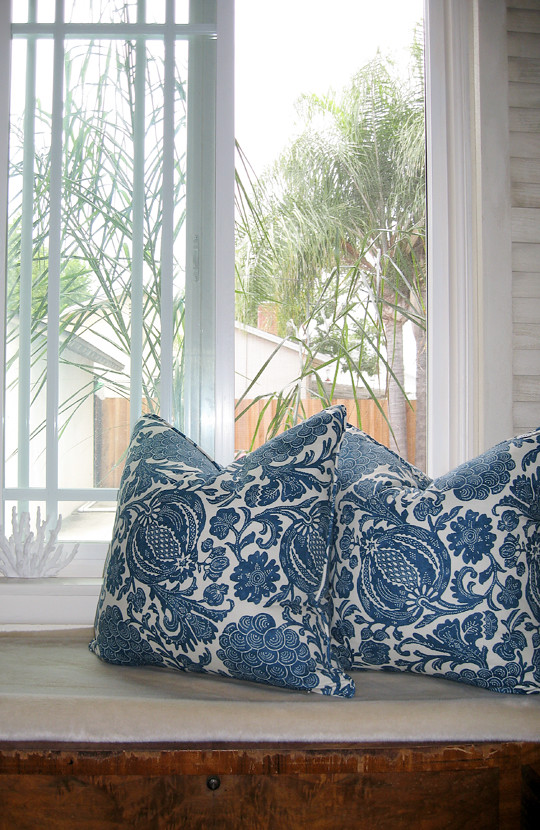 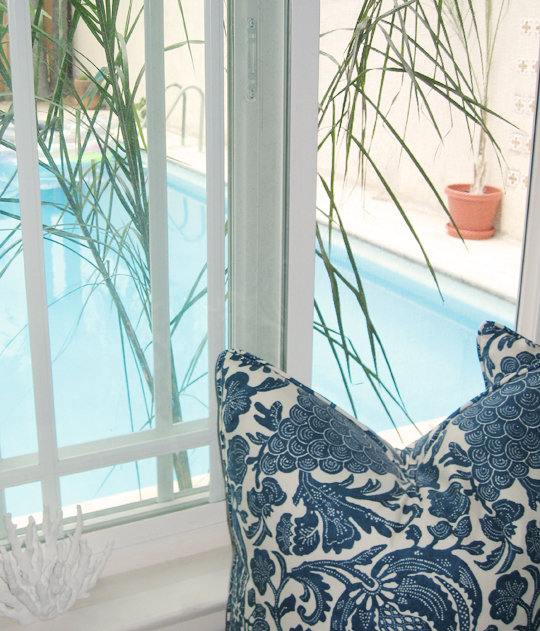 And last but absolutely not least:
My new-ish Jonathan Adler greek key frame {it’s really only new because I FINALLY put a photo in it} and my “Totally Gay” framed needlepoint from Giddie Girly Etsy Shop which I originally found on Flickr, Tweeted, emailed {because I thought it was sold out} and had to buy because it was just too funny not to. I absolutely love it …both sitting on a shelf on our 6’x 6′ Expedit bookcase/room divider from Ikea {dividing our living room & game room which I haven’t really documented yet -but you can see partially here} I finally built last weekend. We had the 5’x 5′ version there originally but it wasn’t large enough …it is now in the guest room holding our ridiculously large DVD collection. 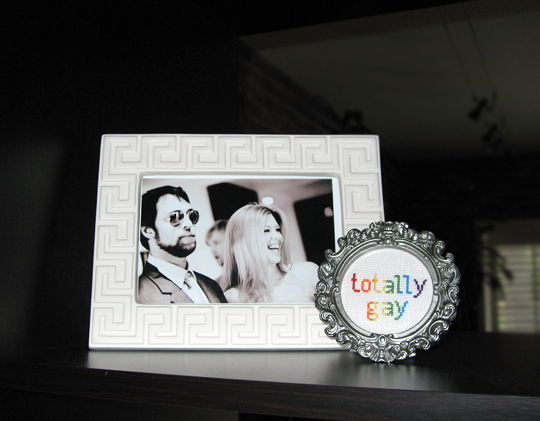 If you were to ask my husband, he would say that absolutely the house is done …and I would say it’s not even close. Each room is still in the initial stages and needs the details to bring it together. Even when I think a room is complete, like the bathroom, there’s always room for improvement. I love that it’s a work in progress because it could really go on forever, thus keeping me eternally busy.