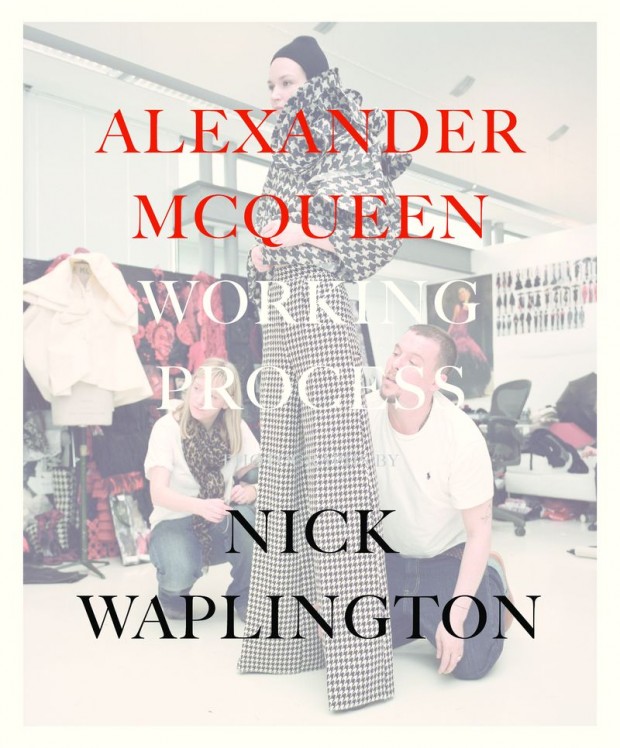 In 2008 Alexander McQueen commissioned photographer Nick Waplington to document the creation of his Fall 2009 collection – all the way from inception to runway showing. Unfortunately, it was to be the last Fall / Winter collection that McQueen would stage before his untimely death. This show, which he titled The Horn of Plenty, found McQueen revisiting his fifteen-year archive of work and recycling it into a new collection. In effect, it was his personal survey of his work to date. The set was composed of broken mirrors and a giant trash heap made up of all the sets from his previous shows. Critics have commented that this reflected McQueen’s feelings towards the fashion system and how it pressures designers to be creative geniuses while relegating each collection to the garbage bin of history as soon as it’s sold. Waplington was given unprecedented access to McQueen and his staff, which included the current Creative Director of the brand, Sarah Burton. Every step of the creative process is documented in fascinating detail, and readers receive a rare insight into the inner workings of McQueen’s creative process. Most notably, McQueen himself conceived the book’s layout, sequencing each picture on storyboards. The book was ready for publication when McQueen died, then was put on hold – until now. This substantial overview, with more than one hundred and twenty photographs, is published just as McQueen edited it, commemorating the most personal of his collections. It includes an essay by Susannah Frankel, Fashion Editor at Grazia (U.K.).

Lee Alexander McQueen (1969-2010), CBE, was one of the most important fashion designers of the last two decades. He was the recipient of four British Designer of the Year awards, as well as the CFDA’s International Designer of the Year award, 2003. In 2011, following his death, the Costume Institute in New York organized an enormously successful retrospective of his work at the Metropolitan Museum of Art. Artist and photographer Nick Waplington (born 1970) has published several books including Living Room and The Wedding (Aperture), Safety in Numbers (Booth Clibborn) and Truth of Consequence(Phaidon). He lives in London and New York.

Visit Arcana Books on Sunday, October 27th, share a glass of wine, and meet the esteemed Mr. Waplington! If you cannot attend but would like to purchase a signed copy go to: Alexander McQueen: Working Process or phone 310-458-1499.

In addition to the parking area directly behind the store, there is plentiful additional free parking in the two lots on Helms Avenue just north of the Helms Bakery campus at Venice Boulevard. These well-lit parking lots have an attendant present until 8:30 PM, and continued parking is permitted for Helms Bakery patrons for the entire evening.

Based in Germany, Christoph Schlein was one of the IG lucky photographers that found himself featured on the actual Instagram account, and one of…