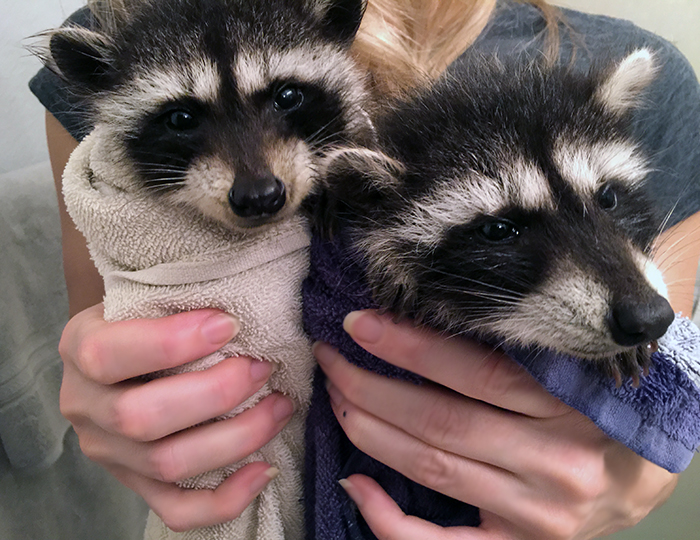 above: just after a bath, swaddled in towels

From the time we signed the lease on the building that would become Dogwood Tavern, we knew we had some little friends living among us – which we may or may not have possibly mistaken for ghosts 😉

The building had been abandoned for about four years, so it was no surprise that the local critters found a warm home in the attic during the chilly fall and winter months. They weren’t much of an issue at first and so we allowed them to stay since it was winter and they were mostly out of our way, but as soon as we got the heater working in the building space below, and left our uneaten snacks around as we were there renovating night after night, we began finding little footprints in the sawdust that were not our own and knew we had a bigger issue on our hands than we once anticipated.

We bought safe traps and within a few months caught about 5 different adult raccoons and set them free into the surrounding woods. Last summer, once we thought we had gotten them all out of the attic, we found one down in the basement hiding in the floor beams; a large mama with two babies.

We DID NOT want to separate the family at all so we left them there for a few weeks while the babies grew bigger and stronger, leaving food and water for the mama to survive so she could nurse them – and we kind of avoided the basement otherwise because this mama was BIG and very protective over her babies, as any mama would be. Eventually though, we knew we didn’t have the ability to get them all out together, so we hired a professional to handle it for us.

After a few days, the pro was able to trap the mama SAFELY, and the plan was to get the babies out while the mama was trapped so we could safely set them all free TOGETHER into the forest nearby. HOWEVER, a random worker whom we were unaware of, took it upon himself to set our mama raccoon free before we were able to get there early one morning, leaving our babies still in the building all alone.

I WAS SO UPSET AND ANGRY, I CRIED. We had worked so hard to keep them all together and this guy, who had no right, released our raccoon and left half of an avocado locked in the cage in her place. I am still so livid just remembering the incident, that I find myself becoming emotional about it all over again.

So now we had two tiny babies that we had no other choice but to care for because we couldn’t set them into the wild knowing they wouldn’t survive on their own without their mama. OMG I SERIOUSLY WANT TO CRY JUST THINKING ABOUT IT!

Luckily the pet store just steps away had kitten powder (recommended to us for the baby raccoons) to make formula with and tiny bottles so we could get some nutrients into the babies asap. They were quite scared at first, but once they knew we weren’t going to harm them, they took to us very fast.

One of my business partners took the brunt of the nurturing and made a cozy little box for them to stay in so they knew they had a safe place – and took them with him everywhere just to be safe. They grew quickly though and we decided that the enclosed shower was the safest place for them so they couldn’t get hurt. They were so friendly and sweet but also totally and completely wild. After a few weeks, we knew we couldn’t continue to give them the proper care they needed so after searching the local mountain area for help without any luck, we found a couple in Idyllwild who rescue and rehabilitate raccoons and wild animals to eventually set free back into their natural habitat.

We were a bit skeptical, worried about handing these babies over to someone after we had grown so attached to them and really wanted to make sure they’d be cared for properly. When we arrived at the home of the couple, we found gorgeous horses in stables along the walkway and two large outdoor cages with happy raccoons playing and peeking their noses out the chain link to greet us. There were bunnies hopping along a little grassy knoll nearby under the moonlight and the entire place just felt like we were in a Disney storybook. They took us inside and we found a large cage where our two babies would be safe as they grew together and behind a sliding glass door, a little room with two more raccoons safe in their little two story playroom.

The place was perfect. The couple had been rehabbing raccoons for over 30 years and were as sweet as can be.

As sad as we were to let them go, we were so happy knowing that they would not only be cared for beyond anything we could offer, that they would have a wonderful life too.

I compiled all the video footage I took of them, mostly of our feeding them and a little play time, but there was so much more I couldn’t capture. Please excuse my low resolution and vertical screen and partial horizontal filming throughout the middle. It was the best I had, but it was too cute not to share. I hope you enjoy them as much as we did. We still miss them 🙂

NOTE: There are currently no critters living in Dogwood Tavern any longer 🙂 We are near completion of our renovation and getting ready to open as soon as we can – I keep saying that, but hopefully by the last week of March it will finally be a reality. 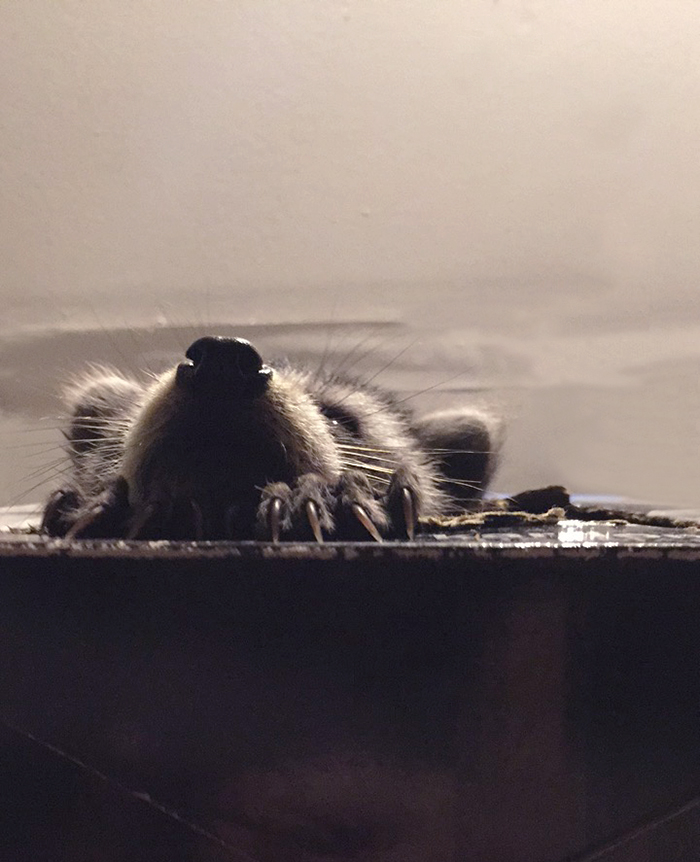 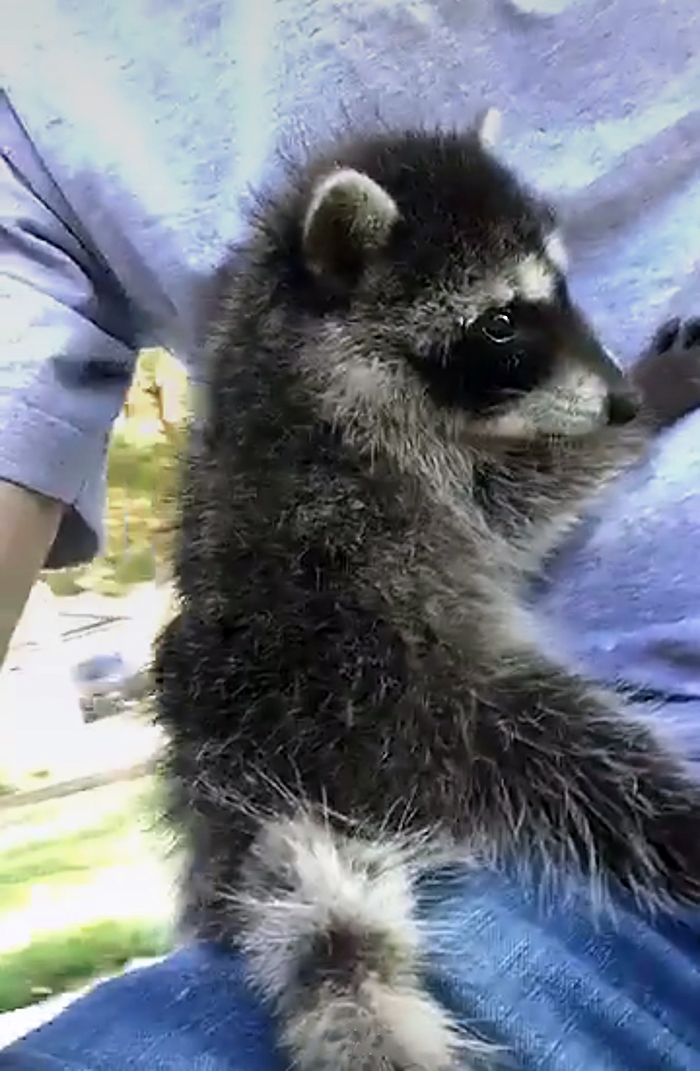 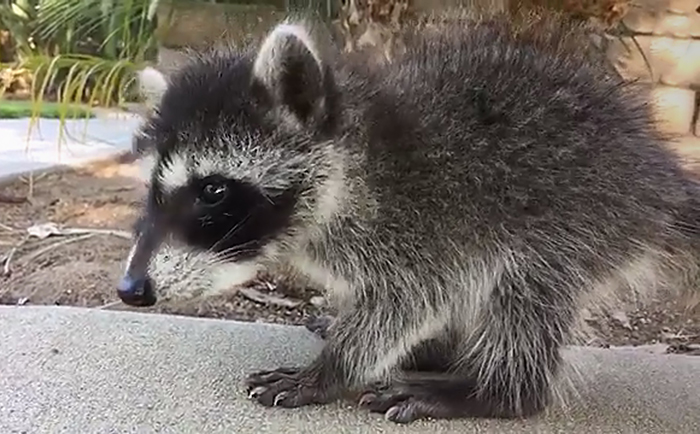 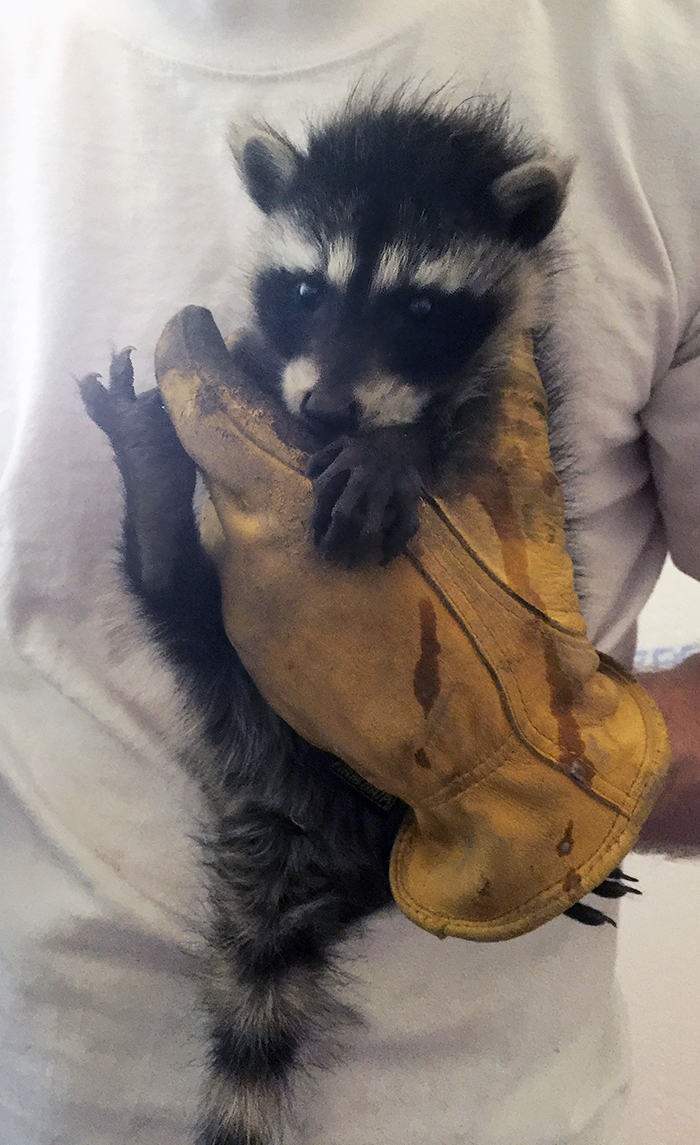 They were seriously SO SWEET!

As if I woke Up in a Different Life