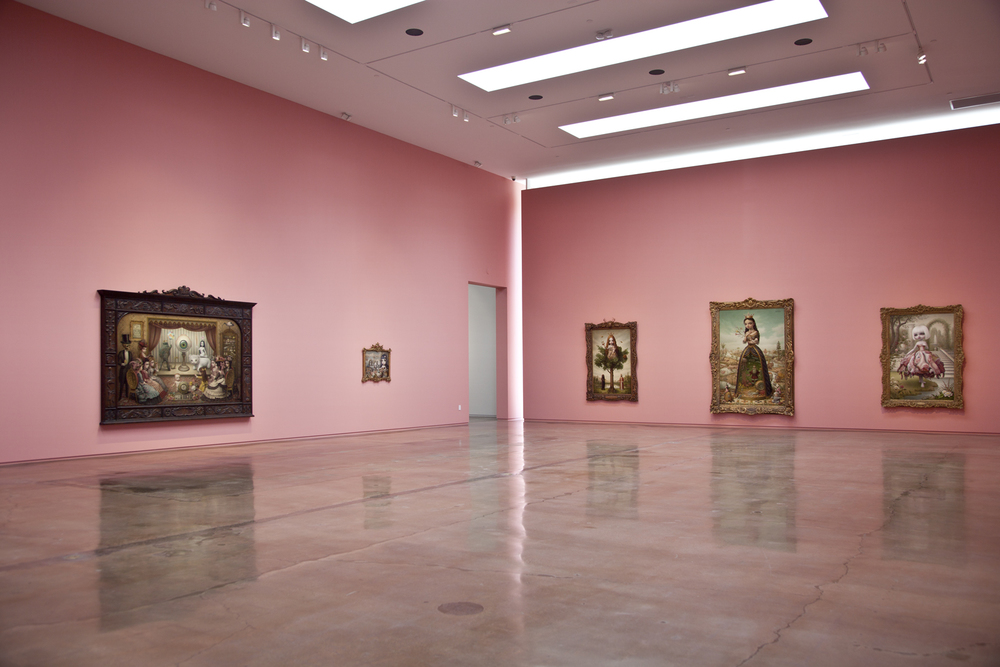 { Maegan’s Note: Mark Ryden is one of my FAVORITE artists. I absolutely adore his work. I love his misty and muted pastel colors and the deceivingly sweet subject matter of every piece.

I originally fell in love with his art when I saw it in some sort of commercial graphic/illustration book sent out by some random company in the late ’90s, wherein Ryden illustrated the chapter pages and tabbed sections in between the content. I had no idea who he was at the time but I saved it for years because it was so fantastic. It wasn’t until years later, when he had already become quite a famous artists, whose works I could no longer afford to adorn my walls with, that I realized he was the same artist I had fallen in love with so many years prior. If only I would have known sooner, I could {maybe} be the proud owner of a Ryden painting. Maybe someday I will get to admire one every day in my house, but until then, the internet and books will have to suffice…

It’s times like these, when I miss working at the art gallery, and even being close enough to hop over to the Kohn Gallery with drollgirl to see the exhibition. } 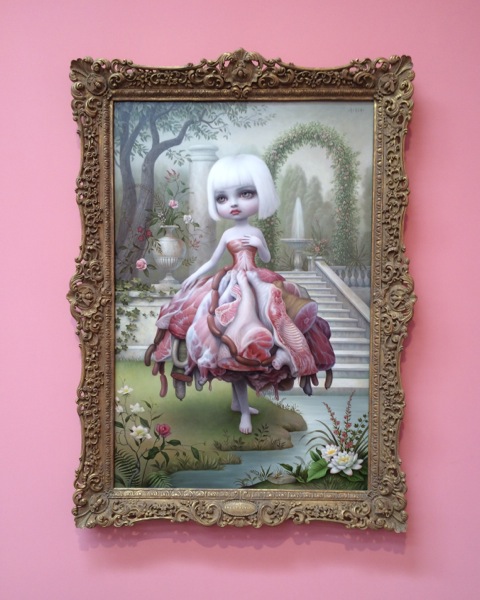 If you are in the Los Angeles area, you can see these incredible works in person (an unbelievable treat!) at Kohn Gallery, 1227 North Highland Ave, Los Angeles, CA, 90038 open Tuesday – Friday from 10am – 6pm; and Saturday from 11am – 6pm.

I {drollgirl} posted a few of Mark Ryden’s works from this exhibition here: Mark Ryden at Kohn Gallery back in May but just recently I was able to see the exhibition in person, and it was extraordinary.

Though I’m not a fan of the peptol-bismol pink walls, they really exaggerated the gallery/exhibition and made the works pop! 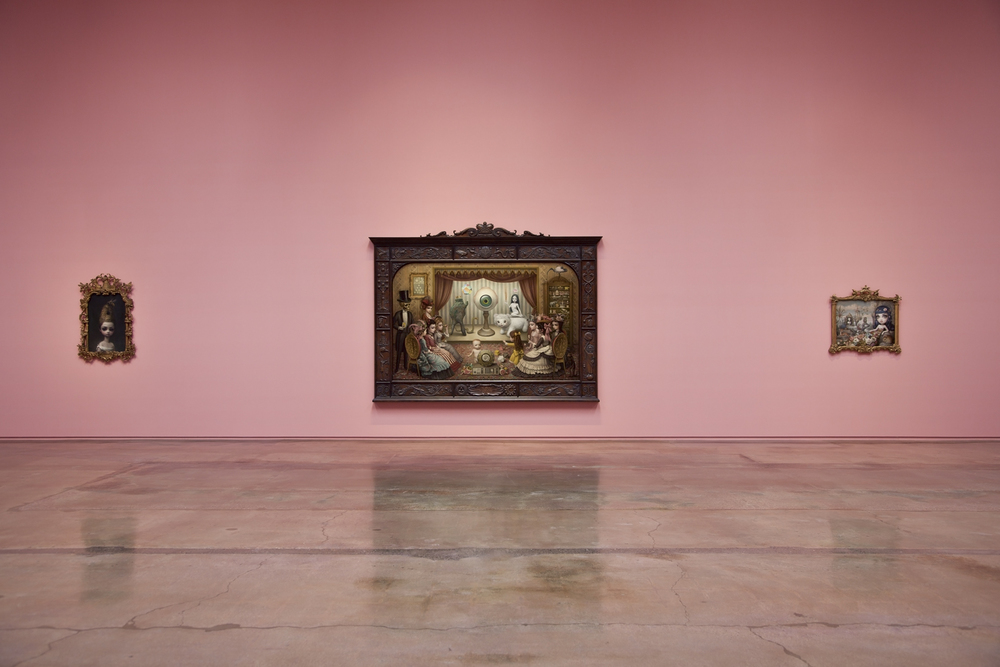 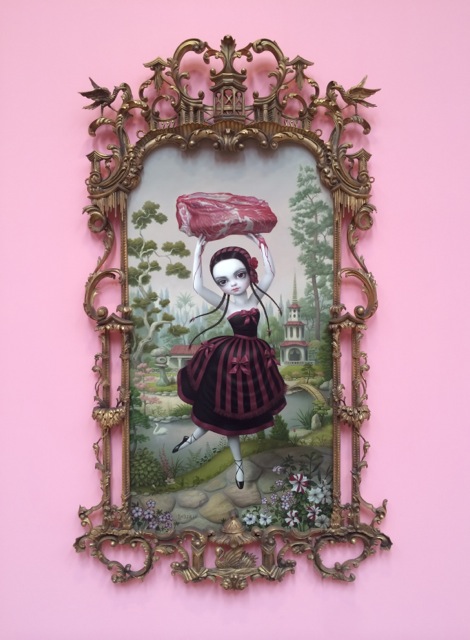 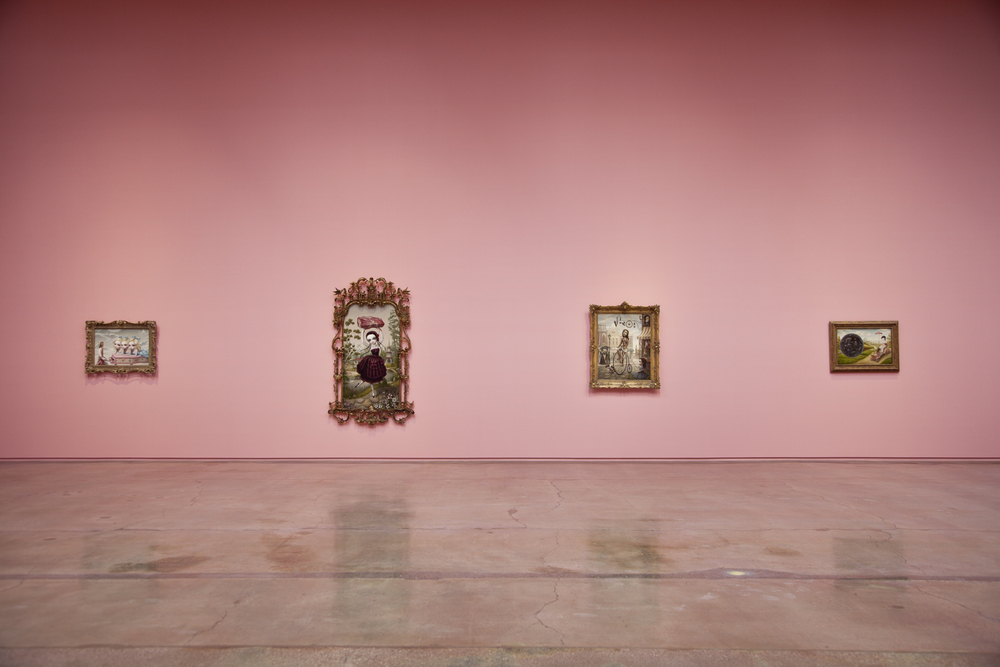 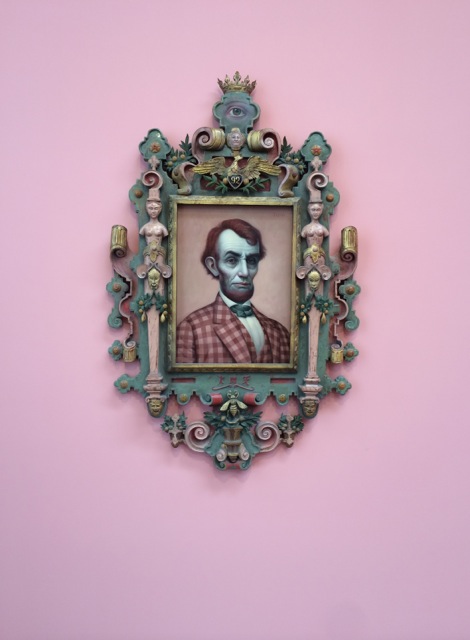 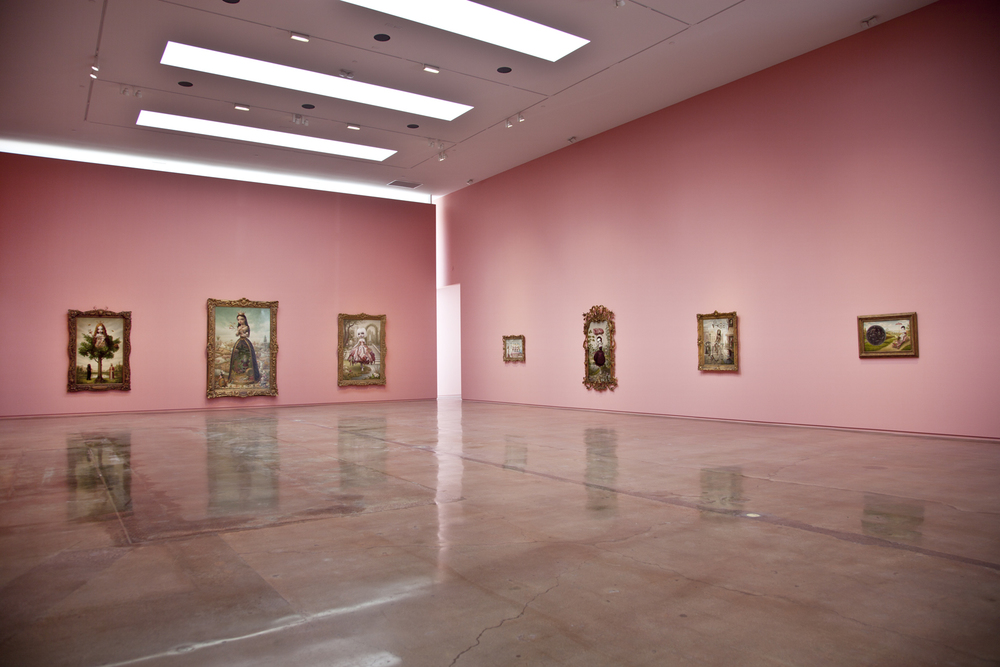 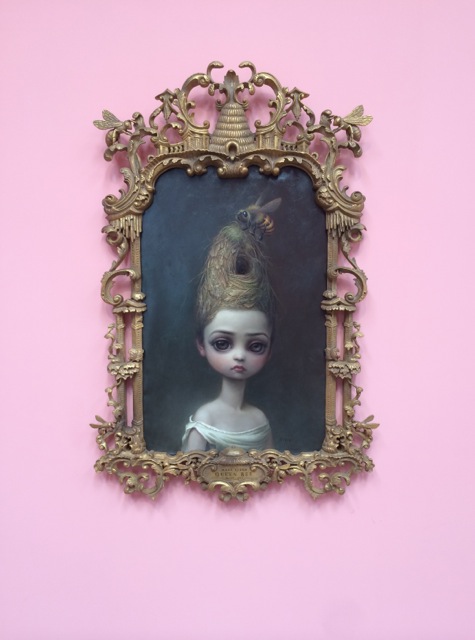 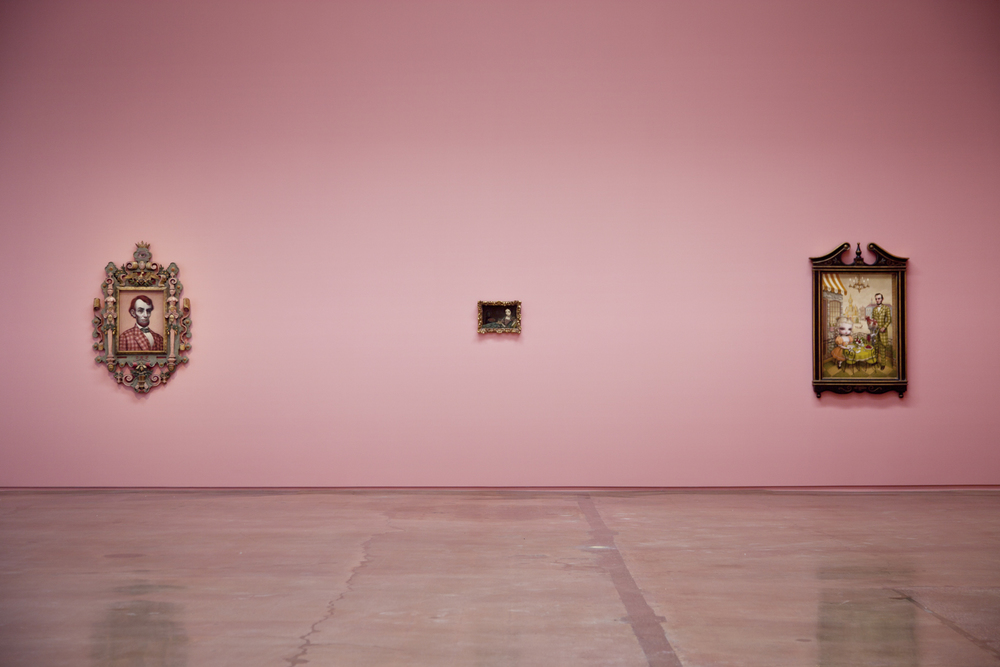 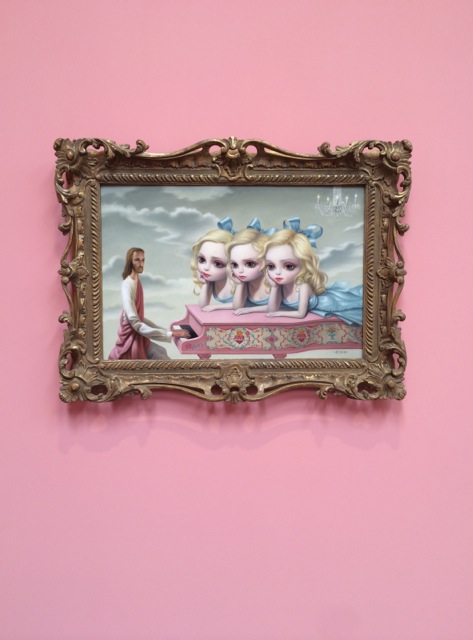 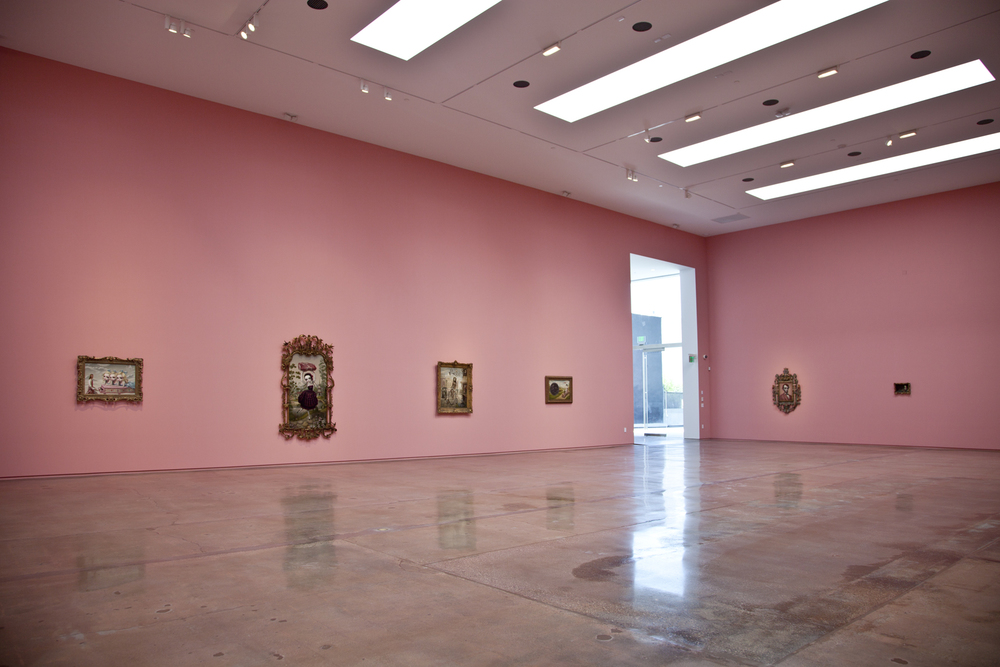 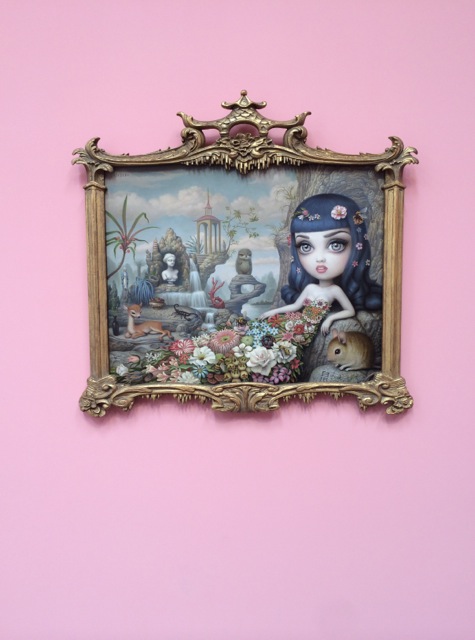 For a bit more information about the artist, below is an excerpt from the Kohn Gallery website….

Mark Ryden underscores his aesthetic forays into cultural kitsch through his exploration of the lost but not forgotten “Gay 90s”. Employing the visual trappings of the formally idealized 1890s in America—women dressed in satin skirts with large bows, large wheeled bicycles, Main St. USA, vaudevillian stages—Ryden recreates scenes from this marginalized slice of pop culture. This important new body of work—which includes paintings, works on paper, installations, and sculpture—negotiates the aesthetic value of clichéd nostalgia through the lens of polished neoclassic painting, and will include Ryden’s largest and most ambitious work to date, The Parlor (Allegory of Magic, Quintessence and Divine Mystery): a 96 x 120 inch painting with a wooden frame hand-carved in bas-relief.

Known for both his imaginative subject matter and consummate skill as a painter, Ryden’s work is influenced by both the French 19th century painter of pristine portraits, Jean Auguste Dominique Ingres, and the underground cartoonist Robert Crumb, where offbeat subject matter is rendered in traditionally beautiful painting technique. His simultaneously nostalgic and dystopian narratives underscore our culture’s attraction and repulsion to kitsch, while linking its ebb and flow as an accepted notion of taste to larger periods of art history.

As such, Ryden has a keen interest in what becomes kitsch in our cultural landscape. The “Gay 90s” is a term that was invented in the 1920s and refers to the utopian image of American life in the simpler times at the end of the 19th century. For the burgeoning population of the big cities in the United States during the Roaring Twenties, the “Gay 90s” was a symbol of a less chaotic life, of an insulated and prosperous country untouched by world wars, when the population of rural America was still greater than the urban one. But 100 years later, by around 1990, not only did the term “Gay 90s” no longer conjure an escape to the 19th century, but rather, its image as an idyllic respite was no longer the paradigm of the Golden Life. Moreover, the notion of large wheeled bicycles and women’s dress bustles had become forgotten if not repugnant to nostalgia seekers and cultural historians more interested in Mid-century Modern.

Enter Mark Ryden. The artist explores Victorian decorative design, clichéd notions of “Main Street USA,” small business and immigration (“The Meat Shop”), and vaudeville shows with a dark and complex sentimentality. Integrating the Christ figure and Abraham Lincoln with his wide-eyed, petticoat clad ingénues, Ryden presents the viewer with an unreal and very oddly camp version of American history. His is an exploration of what becomes cliché, what becomes kitsch and what becomes forgotten. Yet through it all Ryden makes some of the most richly rendered, beautifully glazed, idealized yet disturbing works of contemporary art. Like his contemporaries John Currin, Lisa Yuskavage and Neo Rauch, Mark Ryden uses a skillfully honed technique to render his polished and emotionally charged works.

This exhibition that opens on May 3rd is a continuation of his show “The Gay 90s: Olde Tyme Art Show” that took place in 2010 at the Kasmin Gallery, New York. The Los Angeles exhibition at the Kohn Gallery includes his now famous painting of a meat dress (made popular by Lady Gaga), Incarnation, 2009, along with numerous other smaller paintings and works on paper. Finally, the artist has made a site-specific installation that consists of found and crafted objects that relate to this specific body of work.

Mark Ryden is the subject of a large-scale, limited edition deluxe book recently published by Taschen that reproduces works from over a 20-year period. In addition, Rizzoli has published a book titled “The Gay 90s” that focuses on the subject matter of the show. Ryden was included in “The Artists’ Museum,” at The Museum of Contemporary Art, Los Angeles (2010), and was the subject of a one-person exhibition, “Wondertoonel,” that traveled from the Frye Art Museum, Seattle (2004) to the Pasadena Museum of California Art (2005).