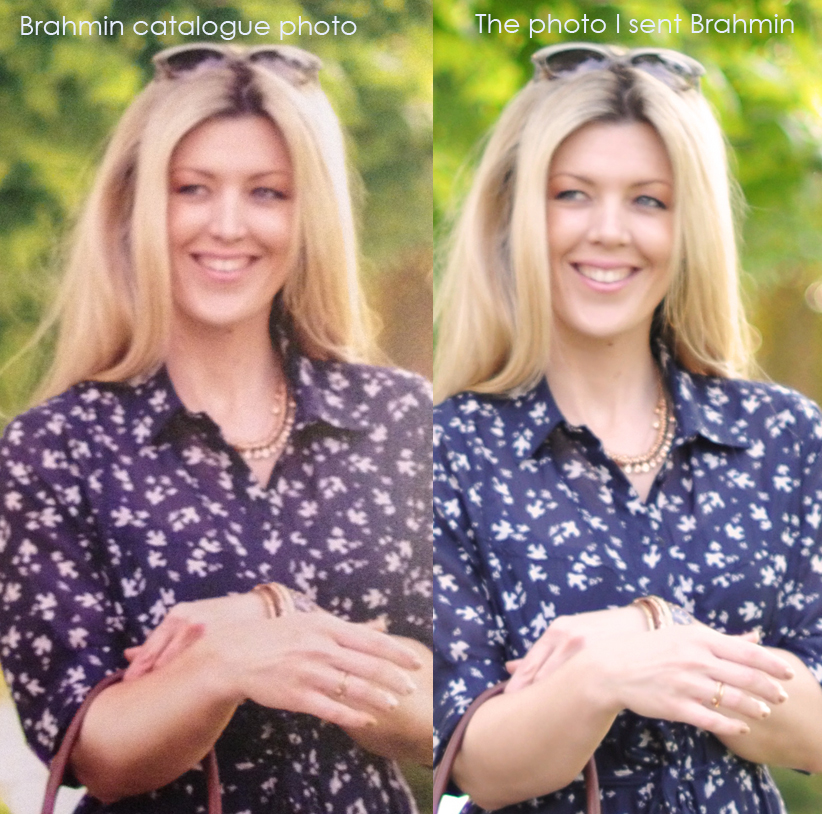 A few months back Brahmin, a great brand and handbag company who I had been working with prior {see this post}, asked a handful of fashion bloggers if they were interested in possibly being a part of their upcoming Fall 2012 print and web catalogue. The deal was that they would send us each a few bags to photograph with an outfit or two and we would send them our high resolution photos that may or may not get chosen for the ad campaign and catalogue. We had to send these bags back to them but were offered two new Fall styles to keep free of charge in a few months time {regardless of them using our photos or not, we kept the bags see: dome bag | crocodile dome bag | brown satchel for my outfit posts with them}. We were not paid otherwise, well, I was not paid otherwise, I cannot speak for anyone else.

Since I already had a great working relationship with Brahmin, and it was simply a few outfit posts, I agreed and signed a contract handing over full rights to use and/or alter my photos in any way. Dumb.

I took my photos in the beginning of Summer during an extremely busy time in my life, and sent them off. When I saw the final web versions of everything, I noticed my face looked a little strange but the images were kind of small and I thought it was just poor resolution and didn’t want to make a big deal about something that was really nothing. I should have said something then. 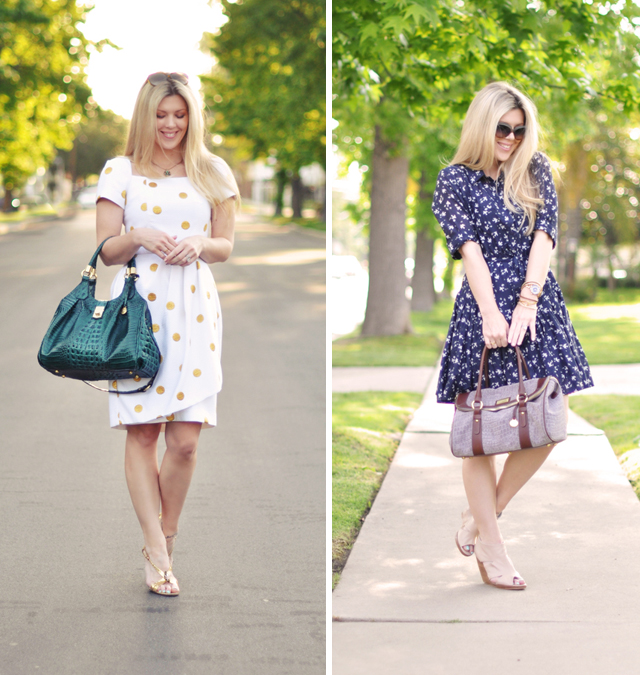 We got the go-ahead to publish the outfit shots on our blogs… see the photos above and find bag one here and bag two here if you’d like to see details.

Just yesterday a package arrived in the mail containing about 15-20 Fall print catalogues. So I flipped through the pages and pages of repeat bloggers and found one small image of my upper body and face and a closeup of the bag directly below it. Except the face looking back at me wasn’t mine.

My photo had indeed been altered… but at first I couldn’t tell what on earth had been done to even get my face to look like that. Since I used to be a graphic designer, I thought the image had maybe been stretched to fit the print parameters. I emailed my contacts at Brahmin sort of laughingly and said I’m not sure what happened but this image has been photoshopped or stretched to fit and does not look like me at all. I included a link to a recent outfit post to show them what “I actually look like” and an “LOL” for good measure. Half expecting a simple apology, I received a strange email back that included this statement…

” I agree that you look much different in your latest blog post but that is you with pulled back straight and darker hair. We did not photoshop or thin you out. We chose bloggers because we wanted you as you. We did crop photos and had to change yours to print quality as they were submitted in web quality too blurry for print. This however was not or would have resulted in your face changing. I am not sure why you think it looks different than what you sent us and we would be happy to send you original files for you to compare. Perhaps you are used to seeing online and not in print?“

So I capture a picture of the photo in my print catalogue with my iPhone and downloaded it to my computer. I pulled up my original “high res photos” that I had sent to them in the first place {because why would I trust their “original copies”} and placed it side by side and quickly realized it was my nose that had been altered specifically, but nothing else.

“Why on earth would they alter my nose” I thought? Did they think it was too fat? Too little? Too wide? Not long enough? But by thinning it out, making it longer and dropping the tip down, they completely changed the look of my face and then blatantly said that they did NOT photoshop or retouch my image.

Now don’t get me wrong, I was expecting a little photo retouching like the darkening on my arm to make it appear thinner, but I wasn’t expecting a complete facelift!

I mean, did they think I wasn’t going to notice?

When we first received the web lookbook of the catalogue and I only saw one shot of myself included, I thought it was because they didn’t like my outfits or they weren’t “Fall” enough. In fact, I even emailed them apologizing that my photos weren’t good enough thinking that was why they didn’t use them. I didn’t care if they used them or not, but I felt like I didn’t do my job in sending them photos they could use and felt badly for it. But now I think they didn’t use my photos because they thought I was fat and ugly… which was made clear by the single cropped photo that did not show my legs, the darkened arm, and the nose job.

At first, I had no intention of blogging about this incident, I just wanted an apology or acknowledgement that they effed up my face. But after that original response, I felt I had no choice. But first I emailed them again, with the photo I’ve used here attached so they could distinctly see the difference between the original version and their version, and really hoping again for a simple acknowledgement and apology. And they denied it AGAIN…

” I have spoken to our photographer and post production person who worked on this project and he has explained the light filter change to warm up the shots to make them read Fall, not to slenderize anything. We actually asked him to do this so that we could use the shots. I would be more than happy to walk you through over the phone if you want to provide me a number to call you.

Again we are sorry you are unhappy. We have been working with you a long time and do not want you to walk away from this project with ill feelings.”

I mean thank you for the apology but Really? I use filters in Photoshop and other photo programs on a daily basis and there is no way that any filter would specifically darken my arm like that AND COMPLETELY CHANGE MY NOSE. This is seriously laughable!

Even after all of this I felt like I shouldn’t talk about it fearing my future relationships with brands or being labeled as “difficult” but I don’t have a “blog agent” or a “PR person” to stand up for me in situations like this. So who is going to do it if I don’t? If I can’t stand up for myself when my face has been altered to fit some sort of societal standard and when my likeness and image, which are a part of my blog and brand have been changed drastically and compromised and then I’m lied to and told that it wasn’t retouched and that I don’t know what my own face looks like — then I am sending a message that I am okay with this kind of photo altering and I am indeed NOT OKAY WITH IT for anyone on any level. I felt I had no choice but to talk about it.

I spent hours thinking about this and talking it out with numerous bloggers and friends helping me to try to figure out what to do. I mean, if they photoshopped a line out of my face or a pimple, fine, or moved a hair from my face or simply did use a filter to warm it up, okay… but altering my nose completely? I like my nose. I don’t think I’m fat. But I’m not a model, I’m a blogger and I sent my OWN images in and this is beyond what I ever thought I’d be signing away with my rights to my own photographs.

Seriously, look at this photo comparison again and tell me I’M WRONG. Tell me right now that they did NOT retouch it.

Click it to enlarge it for a better look.

Yes, in the big picture, this is not a big deal, it’s just a silly catalogue where my face is completely altered and I am misrepresented. I honestly did not care and thought it was laughable until I received that response and denial. But now I ask, how would you react if this happened to you? This is photo retouching gone too far in my opinion.

The Brahmin online catalogue has been updated and changed to include the original photo I sent in.

Below is a screen captured image of the first catalogue they released taken 10/5 at 12:57pm {click to enlarge} 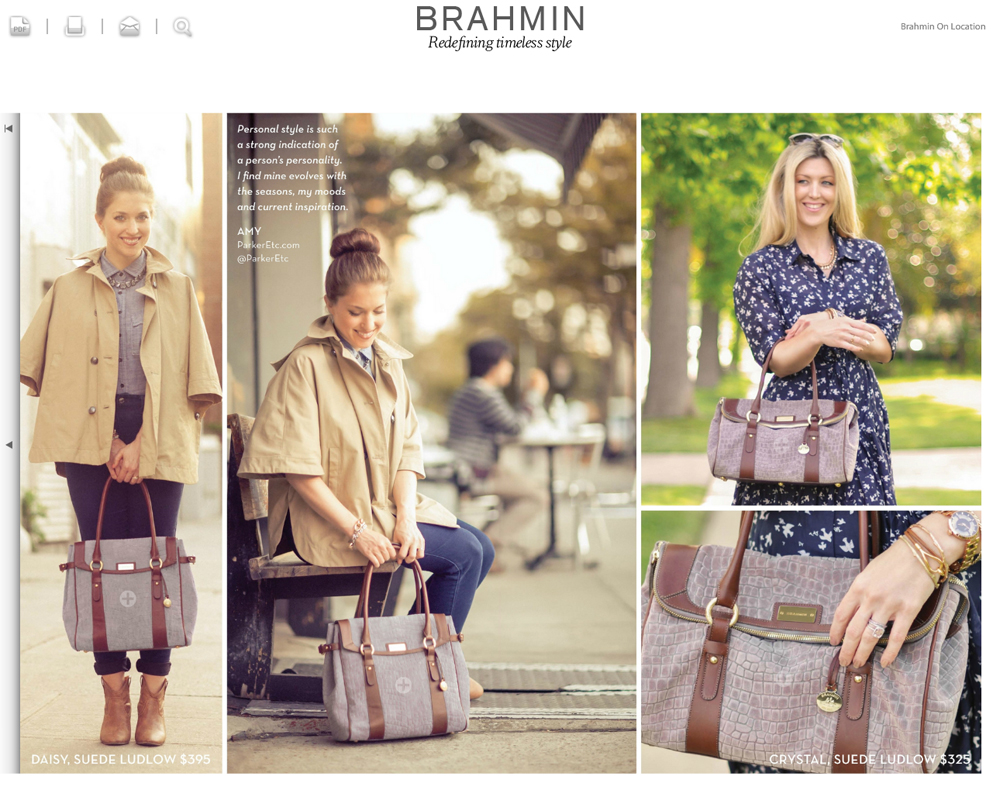 Below is a screen captured image of the updated version taken 10/6 at 12:34am {click to enlarge} 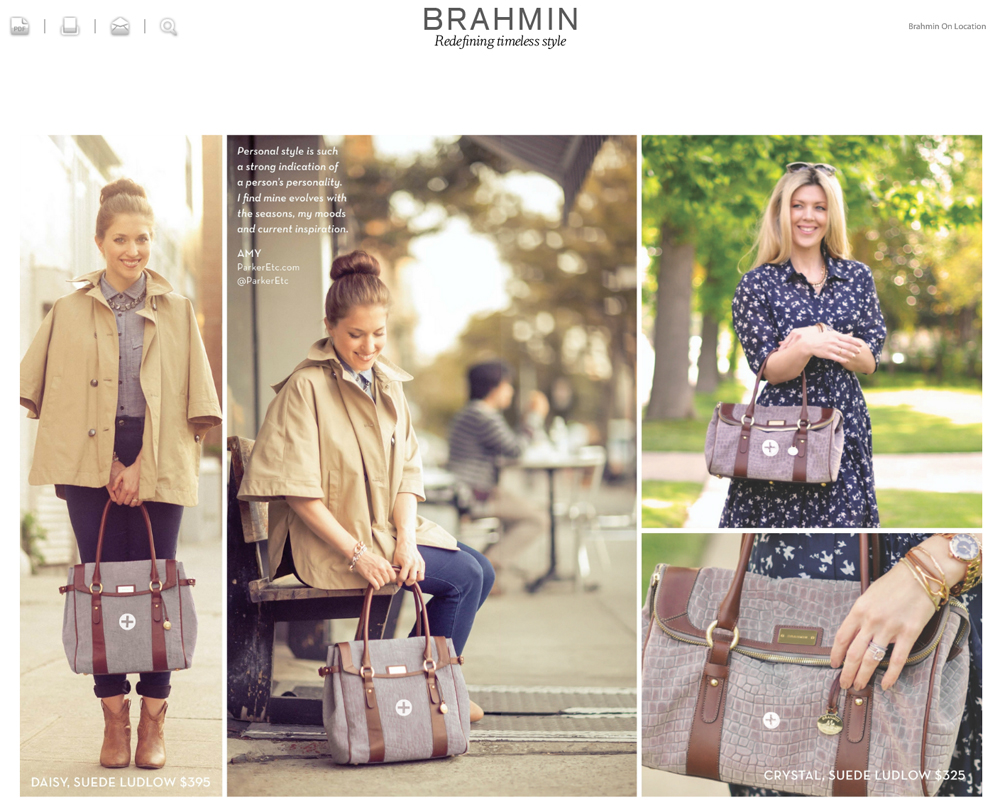 Thank you Brahmin for removing the edited photo and replacing it with my original photos.