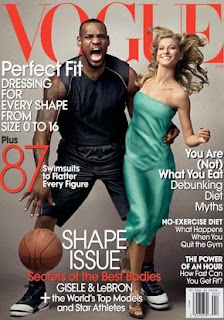 LeBron James and Gisele Bundchen are on the cover of the April 2008 issue of Vogue and somehow it’s stirring up racial controversy.

Are you kidding me? ARE YOU KIDDING ME? Seriously folks, WHAT THE FUCK?

I watch basketball. Actually, I’m a big fan of LeBron James – I would say he’s my second favorite allstar next to Kobe Bryant (LAKERS all the way!) I have seen LeBron make this face on the court during a game, among others. In NO WAY is he representing King Kong. The only reason I assumed he was bending at the knees was so there was less of a gap between his height and hers. He’s so tall, Annie Leibovitz couldn’t even get him in the shot if he stood up straight. And by his quotes: “Everything my name is on is going to be criticized in a good way or bad way,” “Who cares what anyone says?”, I’m guessing that LeBron himself doesn’t even see it this way. JESUS CHRIST PEOPLE Gisele is not even white!

What century are we in? Why is race even an issue? We are all human. What the fuck does it matter what color our skin is or what our beliefs are? I can’t even believe people still worry about it. It infuriates me!

I have this issue of Vogue and not ONCE did I think of this cover as being racist. Not EVER did it even cross my mind that he was black and she was white. It was LeBron James and Gisele Bundchen and that was it. To be honest, the first thing I noticed when I looked at the cover was the Calvin Klein dress Gisele is wearing and how only a woman with a body like that could actually wear that dress.

The comments posted here at The Daily Voice are blowing my mind – just the comments not the actual blog.

…and NBCsports.msnbc.com posted this article with a headline referring to a commenter on the above blog as an “analyst”.

I am so absolutely in love with this I could die. In fact, I think I just did. This knitted chain necklace is so…