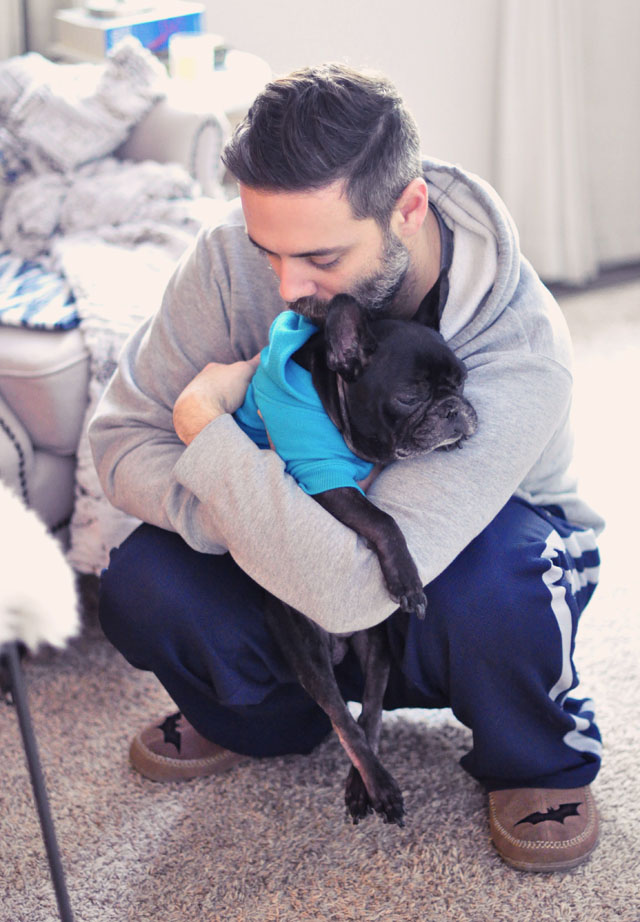 The air is thick and the mood is heavy in our house and it has been for a few months now… though this week has most definitely been the hardest. Each day tears flow, each sleepless night, tired eyes quiver while our mind takes us to the past and to the future and to what we will eventually have to do.

LeRoy is not getting better. In fact, he has progressively gotten worse over the last few months.

According to my Instagram feed, 23 weeks ago LeRoy had his first seizure, though we didn’t know it was a seizure until a week later when he had another one. It wasn’t until three days after that when he had multiple seizures one night that we brought him to the vet the following day for a diagnosis.

The vet gave us Phenobarbitol to quell the seizures, and while it initially made LeRoy a little dopey, like a cute stumbling drunk, he was still my little chicken {aka: himself}. When the seizures started up heavily again about a month and a half later, the vet added a dose of Potassium Bromide to the mix. This addition made this cute drunk look sad, with droopy eyes, and very little excitability. But once he got used to the meds, he was okay. However, a serious of small seizures continued and we’ve raised and lowered the doses to try to find the right balance, but nothing seemed to be really helping.

The bonus was that LeRoy and Delilah could finally hang out without LeRoy trying to eat her, and they became fast friends. Christmas was pretty cute watching them both interested in her new toys. However, by the end of December, just days later, LeRoy was looking less and less like himself.

Lately, LeRoy has started pacing the house incessantly. He paces large figure eights from the kitchen/living room and through my office and he paces small circles, round and round and round in the very same spot. He doesn’t sleep through the night without getting up to pace 4-8 times for at least 30 minutes, if not hours. Sometimes we let him pace, other times we try to simply put him in his bed and pet him until he falls asleep again. Lately we’ve been creating fun forts for him to sleep in to keep him contained.

He walks with his head down and bumps into everything or just barely misses it, and often falls over and onto his face while doing so. He stares at the floor, gets caught in small corners until we pick him up and move him, falls head first in his water bowl, and aimlessly wanders around the house with a little head twitch having no idea where he is. He doesn’t respond to our voices or his name being called, only loud claps, doesn’t care about his toys anymore and while he does still want to eat, the food frequently just falls out of his mouth as if he has no idea how to chew anymore.

He lost his couch privileges about a month ago when he started occasionally losing control of his bladder and bowels. We’re used to this with Bebop, the old pug that could, so we had diapers on hand, but it has only happened a few times, so he’s not in diapers full-time, though as last night proved, he could lose his shit when we least expect it.

The vet told us from the beginning that he wouldn’t be getting better and that LeRoy probably has a brain tumor which is what could be causing the seizures. His new behavior and pacing could mean that his brain is bleeding, the tumor is growing, or he’s got Dimentia, which seems to be right on point. Luckily, he doesn’t seem to be in any pain. I just never thought it would all happen so fast.

One moment he seems to recognize us by offering sweet little kisses on command. The next, his eyes are vacant and he’s off in another land.

LeRoy is supposed to turn ten this year, in April, but we’re not sure he’s going to see that birthday, which is heartbreaking to say the least.

What hurts me the most is that we will probably have to make that decision. I cried for days when I accidentally ran over a lizard with my car in the garage a few years ago and ended its life. To think that I have to decide whether my favorite thing on this planet gets to live another day is gut-wrenching. I just don’t want to do it. I just wish I didn’t have to.

In our new neutral living space, with little hints and pops of blue, I couldn’t imagine a tree in any other color palette. Being…