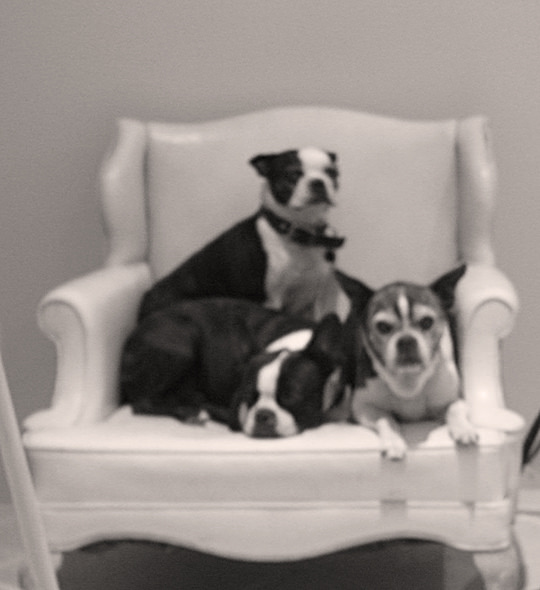 As the hard drive on my computer is at capacity, I’ve been forced to clear out some space in order to get my present life’s work completed. As such, I’ve been going through old photos stashed in old folders holding old memories that are taking up precious memory I need now. And as I came across the photo above, I found myself staring at it for longer than the rest of the memories that were decidedly going to remain in their old folders or get tossed in the trash for eternity.

I may not be alone in this but I find that photos of the pets {mostly dogs} I’ve had throughout my life carry & hold more of my memories than anything else. When I look at them, a little movie plays through my mind of the life I led when I loved and housed each particular pet. And since there has never really been a time in my life when I haven’t shared my space with an animal, the blocks of time are easier for my head to compartmentalize that way I suppose.

After staring for a while longer, eyes glazed over as memories washed over me, I then, of course, analyzed why and what those memories meant to me now, exactly seven years later.

These three Boston Terriers {Bella: sitting up, Boston: looking at the camera, & Billy: laying with his head down} were once mine. They sit in an antique pink chair which was once mine, in a house in the hills which was once mine as well. It was Spring of 2003, I was almost 27 and it was the house my ex-fiance and I had bought together and were remodeling. It was one of the most tumultuous times in my adult life …and by the looks on the dog’s faces, it was for them as well.

While the house was being remodeled, partially by us and partially with family member’s help and partially with hired help, we lived apart. I moved into my mom’s guest room temporarily and the ex set up house at his shop on Santa Monica blvd in West Hollywood. We couldn’t seem to compromise on our temporary living situation. He couldn’t handle it at my mom’s and the thought of bunking at his retail/workshop just brought up childhood memories of when my dad was evicted from his apartment and living out of his shop where my brother and I would have to spend alternate weekends. No thank you. The dogs were continually shipped back and forth from my mom’s house to the shop and to the new place while we were working in it. There were days in a row where we didn’t see each other. I would say buying and remodeling the house tore us apart …but looking back throughout our 7 year relationship, we were never really together.

It was 6 months before we were able to live in the upstairs section of the house, and after 2 months back under the same roof, we broke up and ended our engagement. In the separation, I took Billy {since he had been a 26th birthday gift to me} and the ex kept Boston & Bella. A year later, in another life, on the morning of my 28th birthday, a friend took Billy out for me for his morning walk and he just so happened to yank his leash loose from her hand and ran out into the street and was hit by a car and killed.

And as my past life movie played in HD through my mind, I realized how removed I was from it now and how it no longer defines who I am. My present identity is not emotionally attached to those events any longer and they have been compartmentalized to the “who I was” folder. {although Billy’s another story entirely, sniff}

I remember how devastating those times had been, how I thought I’d never move past it all, and here I am now, in a new life, the second life since even … as a new woman, completely removed from it. I wondered to myself how I got over it without knowing, as I was holding onto the anger so tightly and for so long, and then I realized it wasn’t so much of a “getting over” as much as a “going through” process and coming out on the other side …in a new life.

There are plenty of “pearls” I kept from that life …little bits of wisdom here and “what not to do’s” there which to grow & avoid repeating unhealthy patterns, is a necessity. When I think back now, unattached, I’m much more compassionate for my old self rather than angry at her for being so dumb when I thought she should have known better. I was young …and as cliche as it sounds, you live and you learn. And I definitely learned. And to throw another cliched quote into the mix, I am definitely stronger because of it.

Summer on Lockdown, But Make it a Giveaway!

Lovecats! It’s Giveaway Time… Lockdown Style. If we truly are on a summer lockdown, then we may as well make lemonade! And I figured…