Q: from Elizabeth Marie @ It’s Unbeweavable! and Andrea @ My Chihuahua Bites and Bon Don @ “Who Throws a Cupcake? Honestly.” and from Holly @ Zucchero, Zucchero and from Jessi @ Better late than never!

How did you meet your hubby?? … & What happen with the first marriage or engagement? …& what made you elope?! were any friends/family upset they weren’t involved?

A: After a 7 year relationship and broken engagement with my ex, I moved out of our newly renovated {but unfinished} house in the hills and back to the Valley into an apartment with my cousin Kelley {who was newly single as well}.

It was June 2003, I had just turned 27, had been dealing with panic/anxiety/agoraphobia issues the three years prior and my father who was only 54 had died in March from skin cancer. Let’s just say I was not in the most stable place …to say the least.

Kelley and I moved in at the end of August to what really was the best environment possible given my situation. You see, the apartment complex we moved into was very much like Melrose Place; everyone was friends and everyone knew everyone’s business.

I didn’t know it at the time but my husband-to-be lived there. His place was just downstairs from ours and he lived with his wife. 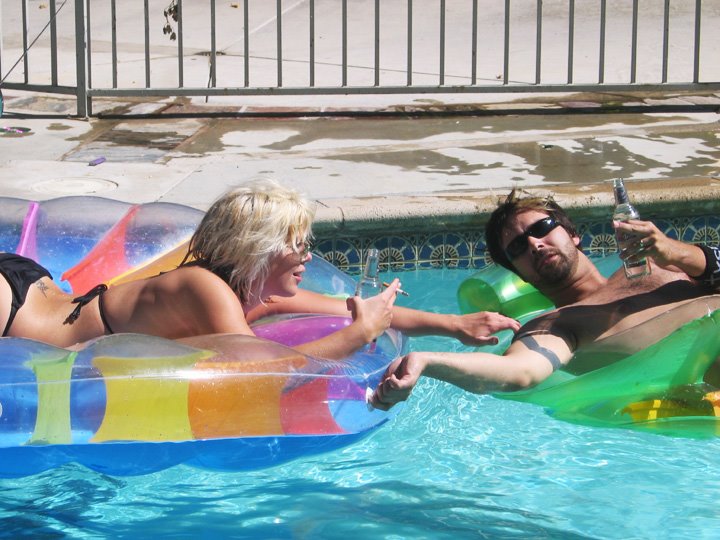 My husband and I became best friends over a years time and then fell in love. {some day I will write a book about that year of my life. It was insane. It was scandalous. It was tumultuous. It was fun and it was fabulous …and it will be anonymous} 🙂

We moved out in August of 2004 and into the condo we are still residing in.

My brother proposed to his then girlfriend about a week later and when we all started talking about dates for our weddings, it would seem that our weddings were going to be about a month apart. We were planning September 1st 2007 and they were planning for the end of September the same year. Around the same time my cousin {Kelley} who eloped on Valentine’s Day two years before because she was pregnant then decided that she also wanted to have a wedding in July of 2007, two months before ours.

I didn’t tell any of them {because I thought I was just being petty and selfish} but I felt like I was being pushed out. Like really, how was our family …the same family … going to pay for the expense of attending three weddings within a very short time span? On top of it, we were going to have to pay for our wedding out of pocket. My mom didn’t have the money and my husband’s father had already paid for his first wedding so we were going to have to come up with the cash on our own. During this time, we were trying desperately to pay off my extremely high credit card debt so any wedding we were going to plan had to be a cheap one.

I had started the initial stages of planning and even went to a bridal shop and tried on some dresses. The dress I fell in love with was $2000.

I had already started resenting my mother for not having any money for my wedding {which was not really fair} but I think I was so hurt by the rest of my family planning weddings at the same time that I sort of put it all on my mom as well. The stress of planning the wedding had already started and I had barely begun! Again, I think I was so upset by surrounding circumstances that anything on top of it just put me over the edge. But I thought to myself, if I have to go through an entire year of this kind of stress over ONE day that is supposed to be the best day of my life, it’s just not worth it.

The husband and I had made plans to check out the new {at the time} hotel just outside of Vegas, Red Rock, on Labor Day weekend 2006 as a possible location for our wedding because their wedding packages were really reasonable. But honestly, I didn’t want to get married in Vegas like that. If I were to have a real wedding, I wanted an elegant, small, backyard wedding.

Two days before we were planning to leave on our trip to Vegas we looked at each other and said, “Let’s just do it now!” …and that’s what we did.

But that put an entirely new pressure on me because WHAT WAS I GOING TO WEAR? {we also needed wedding bands on the fly and reasonable at that so we went to Macy’s and found a set of three eternity rings in white gold with tiny diamond specs for me {on sale!!!} and a really awesome black eel and silver ring for him – I still wear my three bands on my right hand} My friend and BM drove all over town looking for dresses for me …but I was looking for a vintage 60’s dress …which I did find and alter in a day’s time but couldn’t find the right shoes for. So when we got to Vegas, the husband-to-be and I shopped around like crazy for shoes and found nothing.

On our shopping extravaganza, we went into Agent Provocateur and found the most amazing ivory corset which I had planned on wearing AFTER the wedding. But when we got to the counter and the girl said that will be $595 including the nude fishnet thigh highs …and we forked over the cash, my husband said “Why don’t you just wear THAT with jeans” …and so I did. I mean, it was Vegas …it really was the best option.

This photo was actually taken in the Little White Chapel right after the Judge {who just happened to be from our home town of Sherman Oaks} said “Now turn around and smile at all of your guests!” …which made us laugh because there was no one there besides the photographer and the Elvis impersonator getting ready for the next wedding. … so I altered it and used it on the front of our reception party invite {which is also when I wore the vintage 60’s dress} November 11, 2006.

At the time I felt like I was somehow getting the short end of the stick but really, I love that we eloped. We had a blast. We were calm. It was just the two of us. I didn’t have to worry about my BM’s or the cake not being right or my mom or this or that or anything at all …it was just the two of us, looking into each others eyes and saying yes “I Do” …I love you forever and want to spend the rest of my life with you and only you …and yes, everyone was mad. But what choice did they give us? In my opinion, none at all.

I Have No Skin & I Feel Everything & It’s Amazing

What I’m Wearing… * Mesh bodysuit from Yandy {this bodysuit is amazing and it’s only $25! It’s backless, but I wore a lace T-strap…