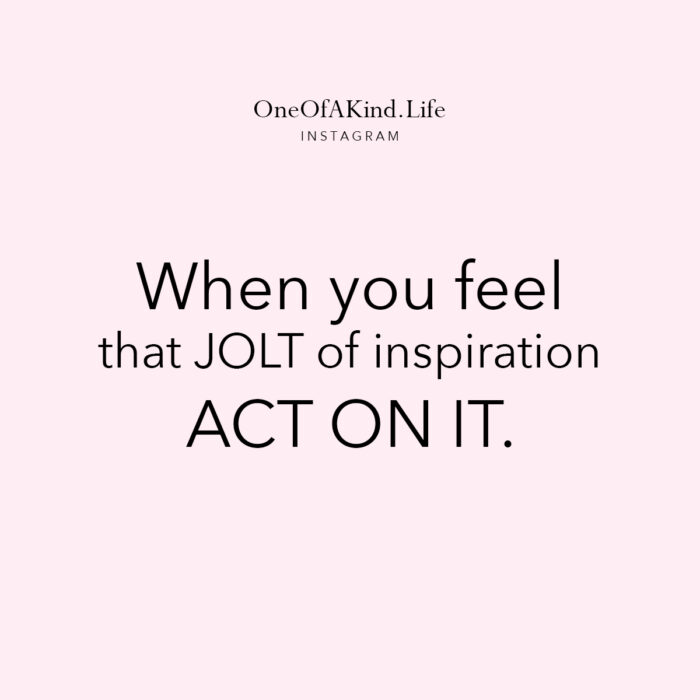 I was out sitting on my patio deck the other night, watching the snow fall for a minute, inevitably writing yet another list, as I do at least 3-5 times every day… but really what I was doing was procrastinating. I knew what I had to get done and I knew what I wanted to get done but I didn’t really want to do either at that moment. I also knew that if I didn’t get either done, I’d be upset with myself and behind the following day. If I didn’t do it now, I’d have to do it then and then was filled with another twenty things I wanted to and had to accomplish for that day. (NOTE: when you own your own businesses, want to’s and have to’s are basically the same thing)

So I sat there for another minute, took a deep breath, and then suddenly I had a SPARK.

You know that spark you get when you have an idea and then the jolt of excitement you feel for the idea? Well I had it… and then I had a choice in that moment; I could have easily continued procrastinating, but instead I recognized the jolt, hesitated for a split second, caught myself hesitating and then literally stood up and said out loud -NO Maegan, YOU’RE GOING TO GO DO IT NOW- and then walked inside and got to work.

I knew in that moment that I had enough energy vibrating around the idea that I could accomplish it in far less time than if I had waited to do it, simply adding it to my list for the following day.

You see, part of procrastination on certain things is because we know they’re either going to take more time than we want to give to them or more effort than we’re wiling to put into them in that moment, and so they feel like a chore. And nobody likes to do chores. But when the idea comes and the JOLT of inspiration actually hits, that is indeed the best time to take action.

The energy surrounding it and the JOLT of energy your brain is pulsing with inevitably makes the task far simpler than you had previously imagined, thus requiring much less effort and of course, far less time to complete.

The overthinking and the procrastinating make it seem far more difficult and challenging than it really is.

In that moment, I stood up, thanked the Universe for the idea – as one does, rode my JOLT of inspiration, at got to work. And you know what? It was easy. I finished in half the time I thought I would and because I had the energy flowing, it took far less effort than I had anticipated as well… AND it ended up being kind of fun.

When I finished, it felt like a little win and enough little wins equal big wins and that all adds up to confidence building in all the other things we need to win at in life.

So when you get that idea and you get that JOLT – don’t put it off, use the inertia and go and do it, or at least get a start on it – because if you start it, you’re far more likely to finish it.

And then you get to cross it off your list 🙂

It’s not good enough for me, It’s not gonna work for you