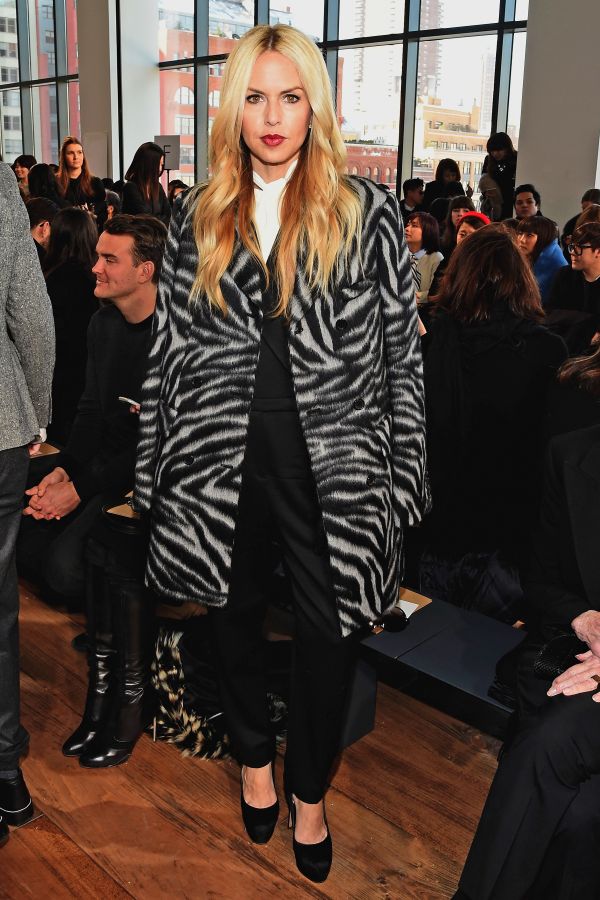 I’m not a mother of actual human babies, but even as a dog mama, who is obsessed with her pets, being able to be close to them all day while I work is such a luxury. I think any boss who creates a nursery for their employees, is an amazing one. I know a few large corporations have onsite nurseries and daycares, which is incredible too. It’s unfortunate that women sometimes feel the need to choose between career and stay-at-home-mother… but some mothers don’t have the option at all. It’s not so much as a career choice, but a necessity to work to provide for their families. I think the decision to incorporate a nursery or childcare service in every office or workplace is essential these days… and preferably, one that doesn’t eat up your entire month’s salary.

Below is a letter from Rachel herself, via The Zoe Report on why creating an office nursery was her best business decision ever, and rather than quote it or give more of my own opinion, I thought I’d just let you read the entire thing if you wanted to, as Mother’s Day approaches. 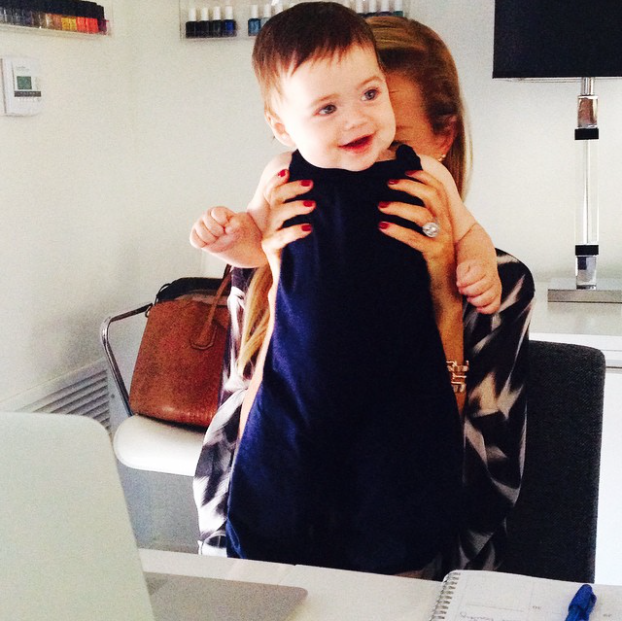 Strong, multi-hyphenate women are important to every aspect of my business: I design for them; I dress them; I highlight them on The Zoe Report, and I also employ them.

In 2014, five of my staffers became mothers. I found out they were all expecting within the span of a couple months (something’s in the water here, I swear), and my immediate thought was: We need to open a nursery. We might not be styling out of my garage anymore, but I still think of my staff as family. I wanted to create an environment where these new mothers wouldn’t have to make a choice between career and motherhood. I’ve been fortunate enough to be able to grow my company from just a few people to more than 40 while having my kids (and my husband) by my side, and so I knew I had to do everything in my power to give my staff that same luxury.

My days are filled with an assortment of photo shoots and school pickups, business meetings and play dates, styling sessions and grocery runs. I am launching style boxes and boxing school lunches. In the words of Penny Lane (eternal muse to my editors), “It’s all happening.” And if I can bring my babies to editorial meetings (it happens), fashion shows (guilty) and designers’ parties (most fun ever), why can’t my girls have their babies close by too? 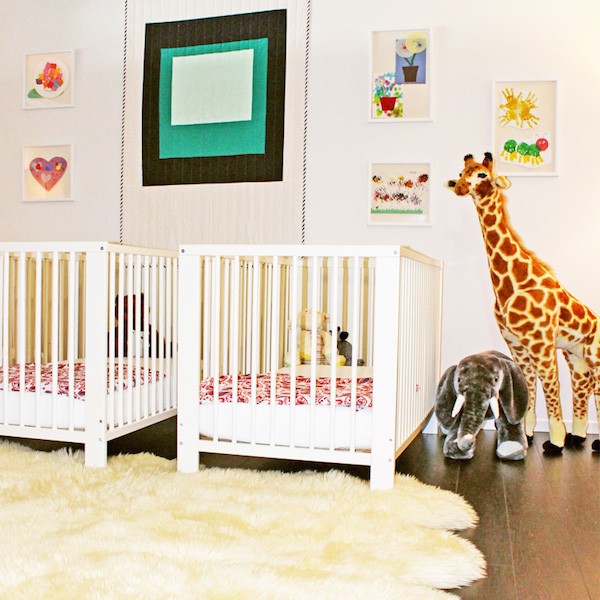 In December I made one of the best business decisions I’ve ever made and opened a nursery {photo above} in our West Hollywood office, right next door to Rachel Zoe Studio. Seeing how motivated and committed the mothers on my team were after returning from maternity leave and being able to set up their babies in the nursery has only solidified my belief that every company should consider this option.

Sure it required us to make additional investments—the physical space, the insurance required to protect everyone, the furnishings—but what we are getting in return is invaluable; the working mothers at our company can improve and grow our business without having to sacrifice spending precious time with their babies at such a crucial stage in their mother-child relationships. In light of the controversies surrounding unequal pay and other forms of gender discrimination, I feel good sending the message to my team that they work for a company that supports and celebrates who they are in their personal lives and that we aren’t afraid to let those truths influence the culture in the office in order to make us more productive and happy on the whole. 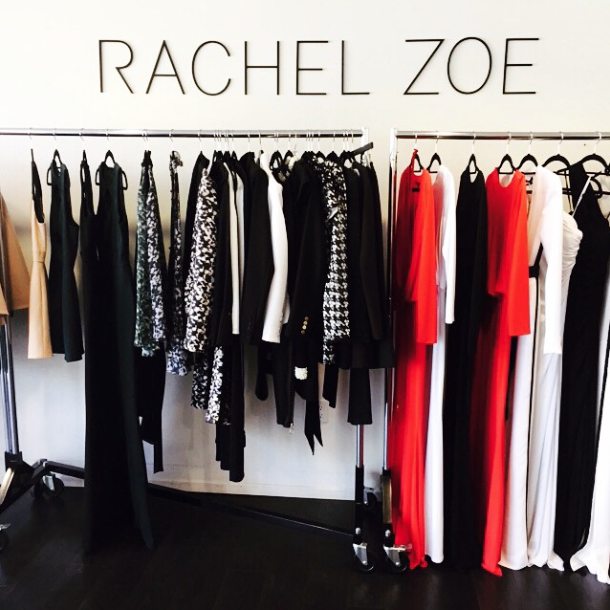 On March 8, in honor of International Women’s Day, the Clinton Foundation’s No Ceilings: The Full Participation Project launched a powerful campaign that imagined what the world would be like without women in positions of power.

At Fashion Week this season, mothers and their children were everywhere from the front row to the runway. And on the red carpet, celebrities including Reese Witherspoon and Diane Kruger demanded to have their voices heard through a social campaign called #askhermore. In other words, I’m not the only one who has been inspired to challenge convention and make drastic changes in order to better support the women around me. It’s in the air. 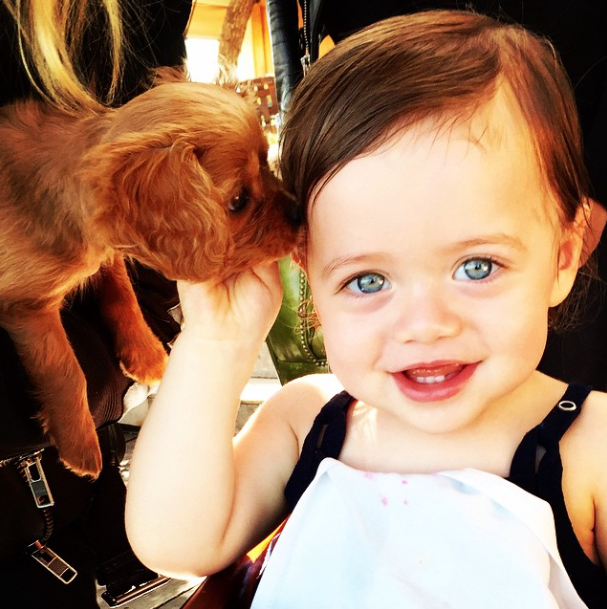 My advice to you: Never apologize for being dedicated to your kids and challenge those around you to not only acknowledge, but celebrate your ability to be a mother and an asset in the workplace. Ask your employers to help you do the job the best you can, whether that means providing adequate healthcare and benefits for you and your family, opening a nursery in your office or allowing you to partially work from home in order to be with your children.

Beyond that (and with Mother’s Day this weekend) find a way to support the women in your life and those who need our help. From Girls Who Code to Every Mother Counts and Susan G. Komen For The Cure, there are innumerable organizations that make an incredible difference in the lives of women and the issues we face. If there is one thing I now absolutely know to be true it’s that we are all stronger together–babies and all.

What I’m Wearing… * Brushed silk romper by Helmut Lang (black but looks navy) – I bought this in 2009. I know because I…