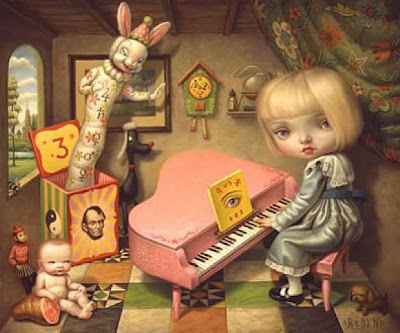 My husband and I got married (well, eloped) September 4, 2006. He proposed at my 30th 80’s Roller Skate birthday party at the end of the Hokey Pokey – and it was awesomely radical! I thought soon after we’d buy a house and start makin’ babies.

Real estate in LA slowly started falling in the toilet which was a good sign at first because it gave us hope that we could maybe afford to buy bigger and better – and bad because it meant that we would have to wait even longer to buy. For me this basically means putting a halt to all future plans. Let it be known that I am not the most patient person in the universe. Waiting is not my forte.

Last August, we were almost positive that I was (accidentally) pregnant. Two weeks later, Aunt Flo arrived with the [insert British accent] bloody bad news. We hadn’t really planned to start at that point but we got excited and began trying. By December, I was still without child and came to the realization that “trying” sucked! We had much better sex before and after we stopped “trying”.

I guess I’m not the only woman who thinks she’s going to get knocked up on the first try, but after 14 years of trying desperately NOT to get pregnant, it’s a bit confusing when it doesn’t happen right away.

We decide to stop “trying” at the beginning of the year because the emotional roller coaster I went through every month was a killer for both me and my husband. We also didn’t have the house yet so technically we weren’t ready.

So now it’s the middle of March. As you may know, there is somewhat of a “baby boom” happening. Everyone and their mother (teehee) has got a baby in their arms or on the way. My mother constantly emails me pics of newborns or “baby news” from friends of the family. My father-in-law has been bugging us since before we were married for a grandchild. Many of our friends have babies now. A friend called the other day and told us they are preggo with their THIRD! Everyone is asking us WHEN, WHEN, WHEN? Every where I look I see a pregnant woman. BABIES, BABIES, BABIES! O M G.

I am starting to get really defensive about the whole thing. A bulging belly waddling down the street is liable to bring me to tears. I feel like a failure as a woman. My brother said to me on the phone yesterday “you’re next!” after giving me all the details of their friend’s new baby boy. I wanted to scream – NEXT? I WANTED TO BE FIRST! At this point, I can’t bring myself to tell anyone if we were trying because what if it NEVER happens?

My entire life the one thing I was absolutely sure about was wanting to be a mom someday. I will be devastated if I can’t.

* Recipe by guest contributor Laney Schwartz, creator of Life is But a Dish We did it! And by we, I mean you. Life…