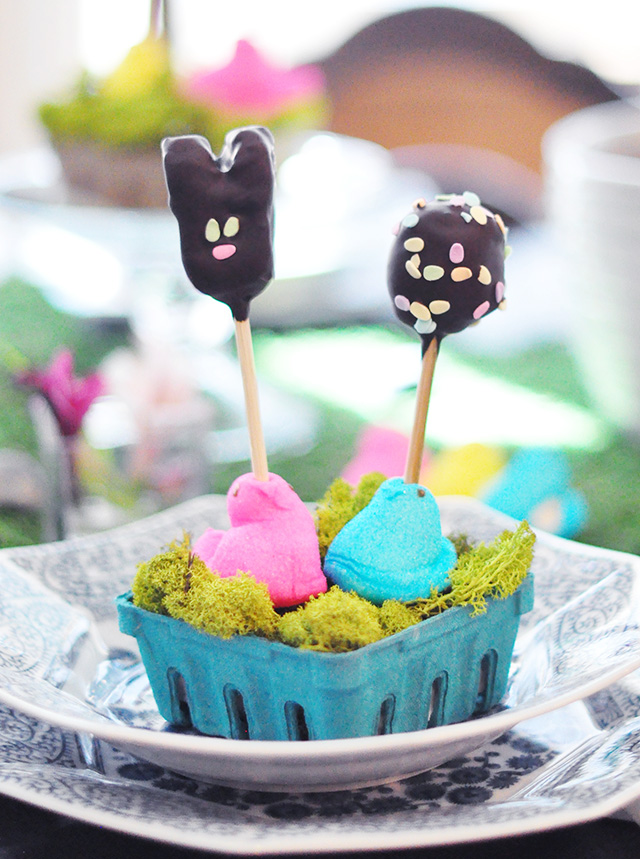 I am clearly a day, week, month late on posting these cute Easter desserts in their little basket stands, but in all honesty, I just made them yesterday. Sometimes my creativity for holiday crafts and food comes in time for the holiday but a little too late for blogging. But these were too cute not to share so Pin them for next year!

Cake pops are not necessarily difficult, but there are so many steps involved, they become a bit time consuming, but the more you do them, the better you get at making them, just like anything else.

For instance, the first time I made them, I lost a few pops in my chocolate and learned that after the 20 mins or more in the freezer, to take only about three out at a time to dip, decorate, and set so that the others don’t defrost. They work best when they’re still on the frozen side {though they never actually get frozen}. 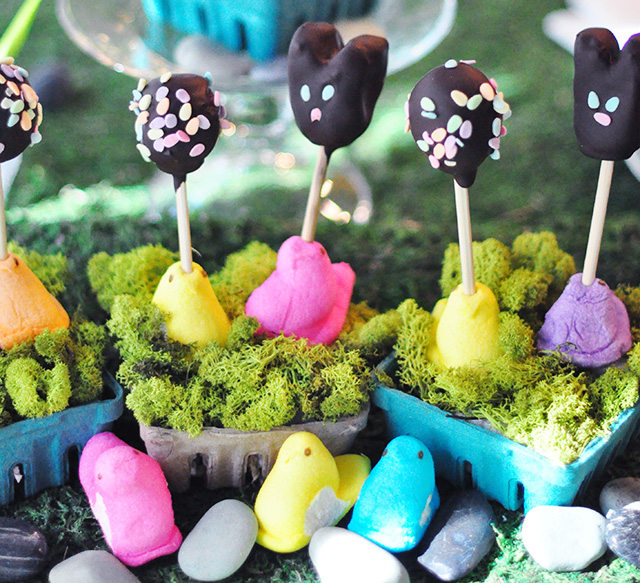 I’ve also learned that the perfect sweetness mix comes from white cake mixed with cream cheese frosting {about two heaping tablespoons} and dipped in semi-sweet chocolate {though these would have looked ADORABLE in white chocolate}. This way they’re not too sweet OR too chocolatey. The sugar crystals on top are my favorite for a little added sweetness and a fun crunch. However, I definitely like adding color-coordinated holiday sprinkles for the festiveness. 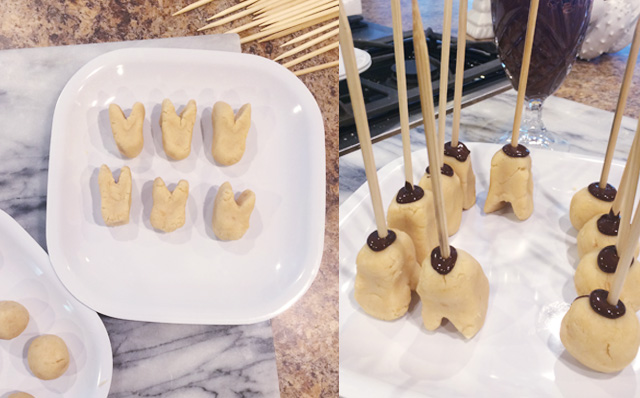 Rather than crafting perfect “balls”, I tried to make them a little more oval or “egg shaped” for Easter, making sure to insert the stick in the bottom of the “egg” and then added pastel egg sprinkles on top. Cute enough, definitely. But I wanted to try my hand at bunnies.

I created the bunnies by starting with a perfect ball shape. Using my thumbs, I made a bit of a square/rectangle, then using the side of one of my sticks, I twisted as I pushed down horizontally into the top to create the bunny ears. I used my fingers to shape them a bit more. I wasn’t sure how I’d set them for the freezer, but just like the balls, I placed them upside down on their bunny ears, and it worked out just fine. Based on what they looked like above, I wasn’t too sure they’d turn out cute but… after dipping, I finished them with quick pastel eggs for eyes and a bunny nose, and they were cuter than I expected {though if you’re a bit more patient, and have better supplies and sprinkles, you can probably create a much cuter face than I have}. 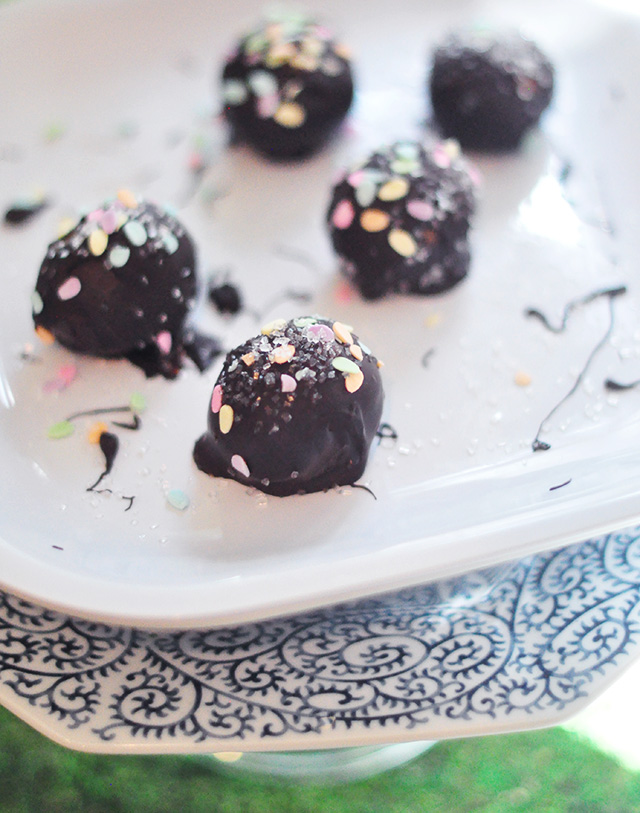 When I ran out of sticks, I made a plate full of eggs with added crystal sugar sprinkles, and though they were a bit heavy on the chocolate {because the sticks aid in allowing the chocolate drip off by spinning them upside down after dipping} the mix of crystals and pastel sprinkles was my favorite look. I drizzled bits of chocolate on the plate and left the sprinkle extras on the plate as well for a pretty artsy look. 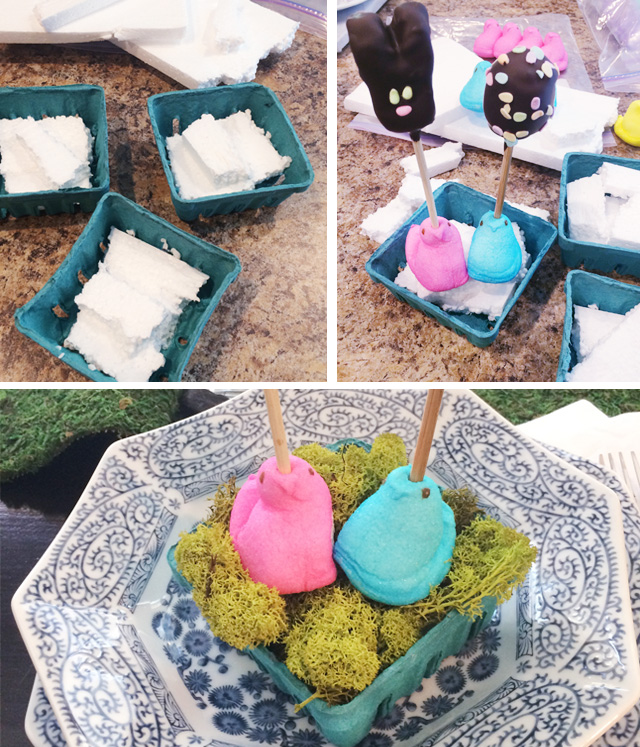 I created the bases using cardboard baskets I saved from farmer’s market berries {because they were so cute}. I grabbed some packing foam sheets from the shipping boxes stacked in our garage that haven’t made the garbage yet {but I swear they’re clean}, some moss, and some old and stale Peeps.

I quickly broke up enough foam so that my cake pops would have enough room to stick through AND enough weight to keep them upright.

Using last year’s Peeps {that were saved in a ziplock but still stale and a bit hard so they were easier to pierce with the stick AND offered a bit more support than the soft new ones -see the lavender one somewhere below, it was fresh and it got smashed as I poked it vs the others that kept their shape} I popped the stick through, pulled them about halfway up the stick, then pooped the sticks into the foam and covered the foam with moss to disguise it.

And since the peeps are JUST FOR LOOKS, I pushed them down into the moss for extra support.

NOTE: If you want the Peeps to be edible, you’ll have to use something besides moss to cover your foam, like Easter grass for Easter baskets maybe? That’s up to you… I don’t like Peeps, but they sure are cute. 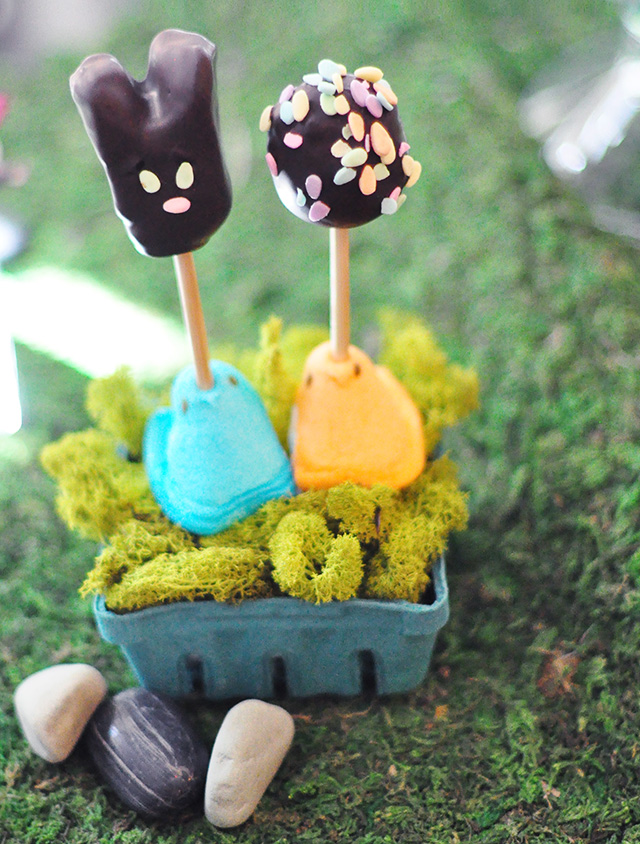 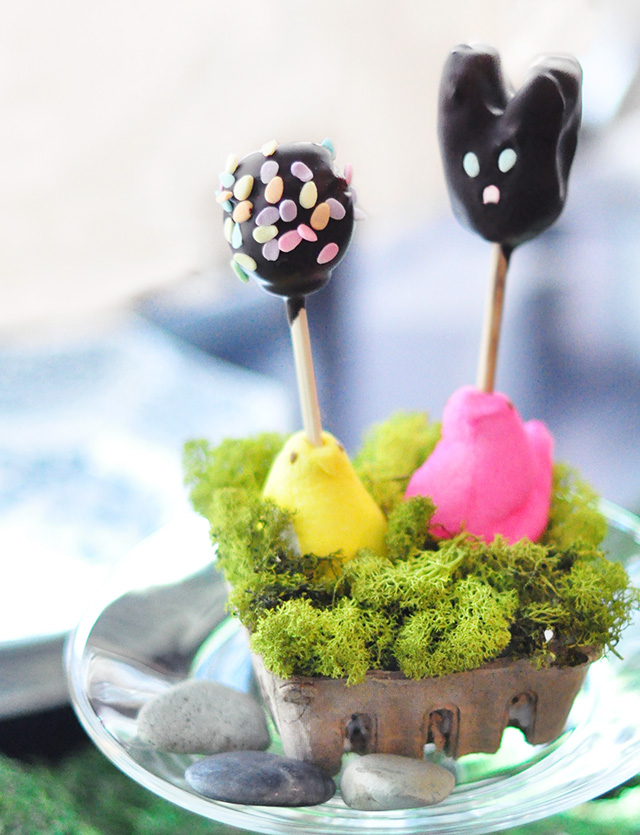 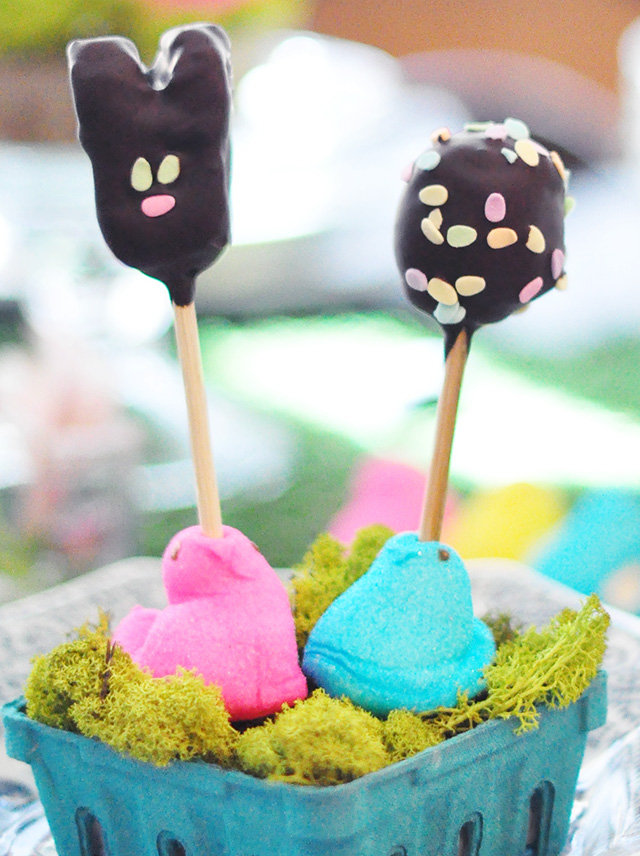 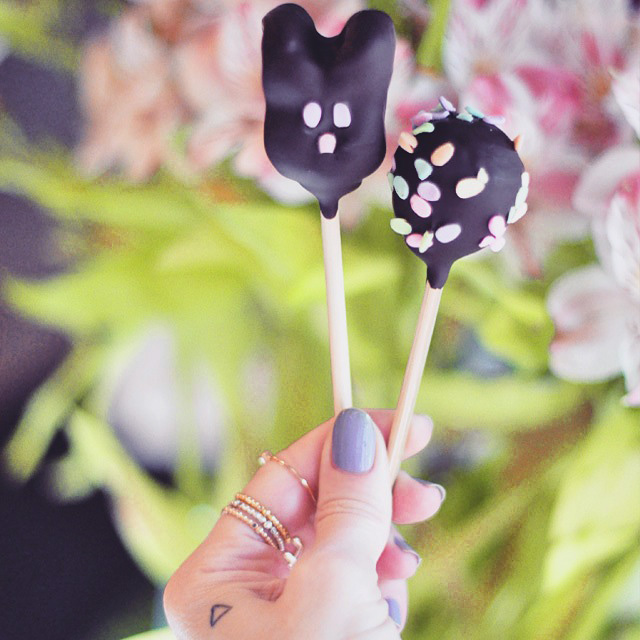 * Find more info/details on my Textured Spring Tablescape as well as wine and more desserts here. 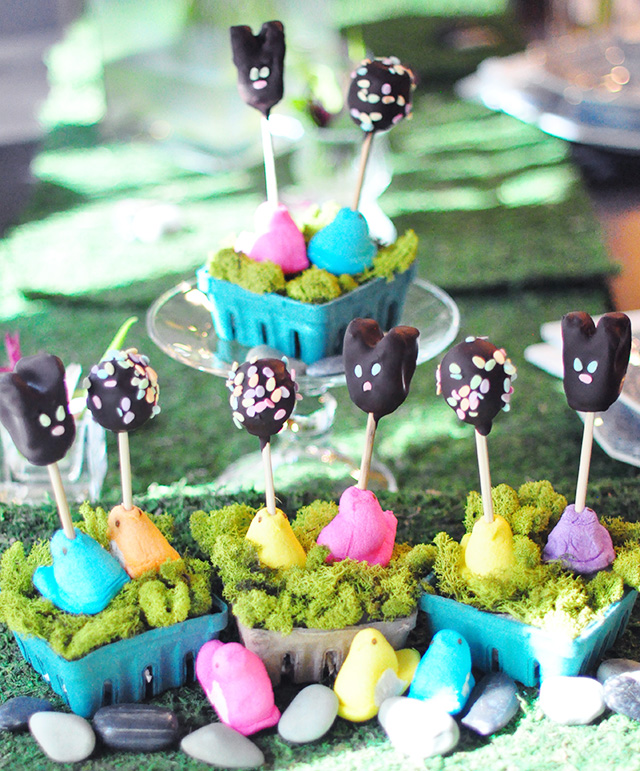 * Hope you’re having a lovely day!

Shimmy till my garters break & all that Jazz