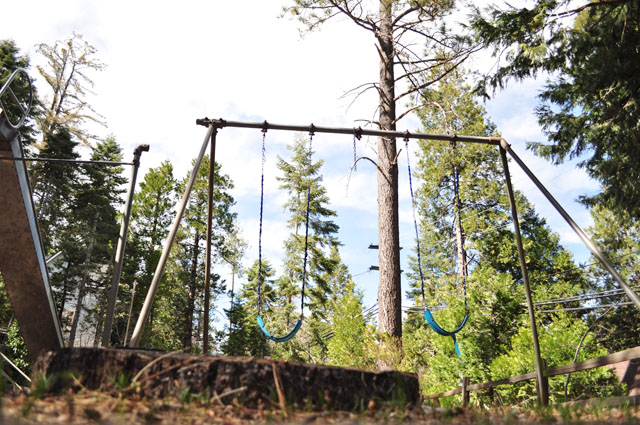 As I’m sure I’ve mentioned 1million times, but just as a quick refresher, this house was second to last on our list of about 18 houses we wanted to look at up here in Lake Arrowhead when we were on a serious hunt for real estate. I was 100% reading a book by its cover and by the looks of the outside via the listing on whatever real estate site I was using, it was horrific. And as we followed our agent to this house, we drove down a road my husband deemed unworthy of living on. Pulling up and into the driveway, there were already two strikes against this house.

But then we walked in. And it was perfect for us.

When we finally saw the house, it was after a “flip” so the bones and innards had all been renovated as well as the kitchen and most of the baths. It was move-in ready and other than a few coats of paint in a few rooms, we didn’t “have” to do anything to it to make it livable. Yes, I’d love to rip out all the carpet and redo every single bathroom, but they are livable.

So the exterior was first on our list of things that needed a little upgrade.

We didn’t expect to be able to paint the exterior until Summer but the weather permitted it in April and we couldn’t love it any more than we do now. I mean. We love it. A simple paint color change and it became a completely different house and I am already so much more happy with it now than when we first bought it. Second on the list was to remove the ridiculously large and very very old playground equipment from our property that I actually thought was a neighborhood park when we drove up.

I hated it. I really really hated it. 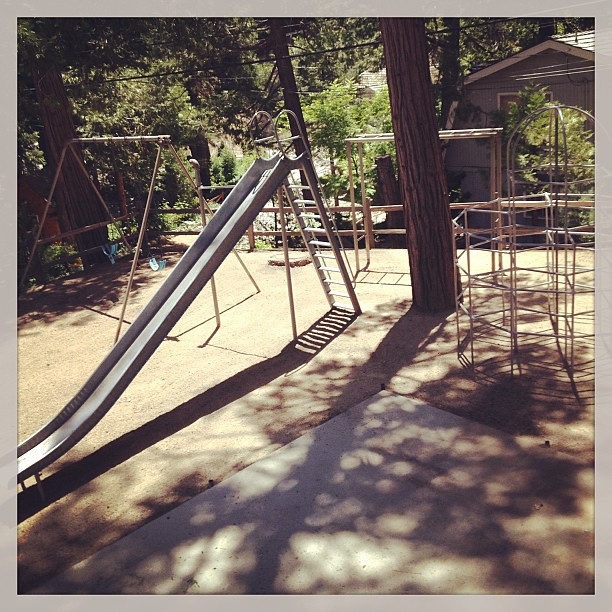 Here’s what we knew about it…

The house was originally built in 1957 by {or maybe bought by} a contractor who also worked for the school district. Sometime in the few years following, he acquired and installed the playground on the property.

So we assumed it was from the 60’s. However, if he erected it in the 60’s, it may have been even older if the school was getting rid of it? {and maybe the swings seats had been upgraded through the years?}.

A few days ago we ran into a neighbor in his mid-70’s who said when he bought his house 50 years ago {assumably around 1963}, the playground equipment was already here and sentimentally offerred a sweet story about his children AND his grandchildren both playing on it. Which was admittedly quaint and heartwarming.

So it seems it was a bit of a neighborhood free-for-all playground. But there are no children around now to play on it. And since we don’t have children of our own, it seemed silly {and almost like a slap in the face} to keep it up.

We actually left the monkey bars {way in the back} because the husband uses them to do pull-ups on. And while I totally want them gone, they are the least offensive and will eventually be removed when we have a perimeter wall/fence built.

The view from my office window… 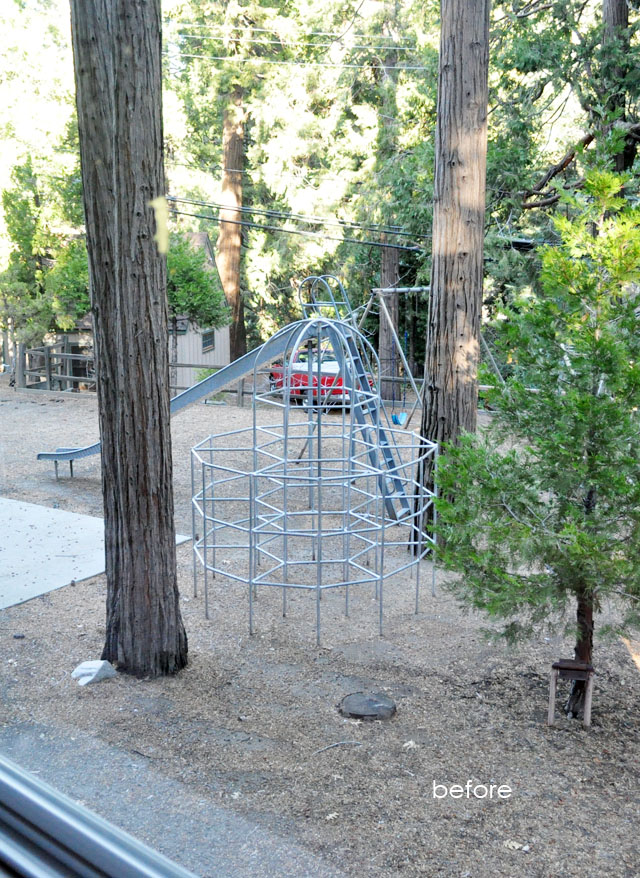 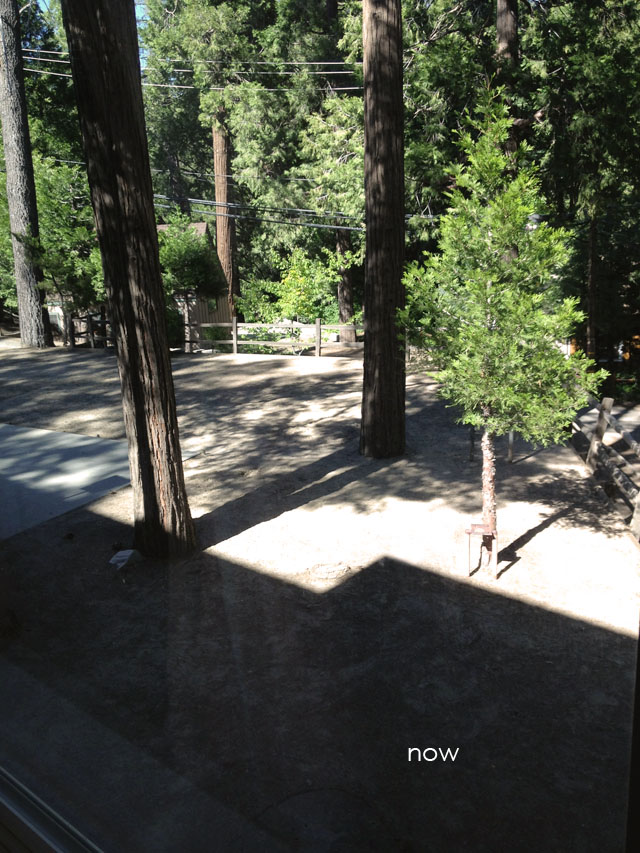 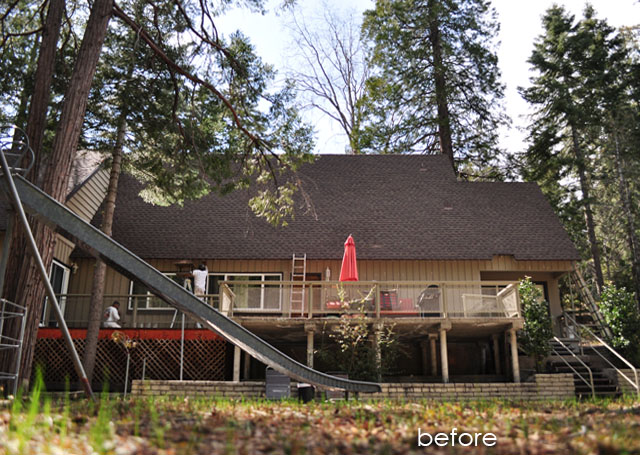 From street level… before/during exterior painting… the slide was huge 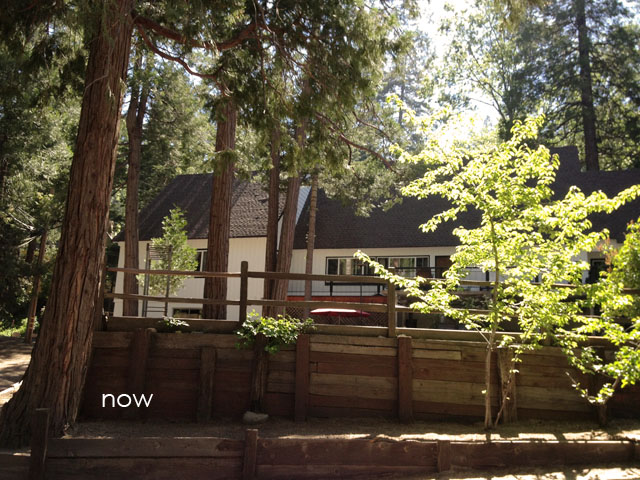 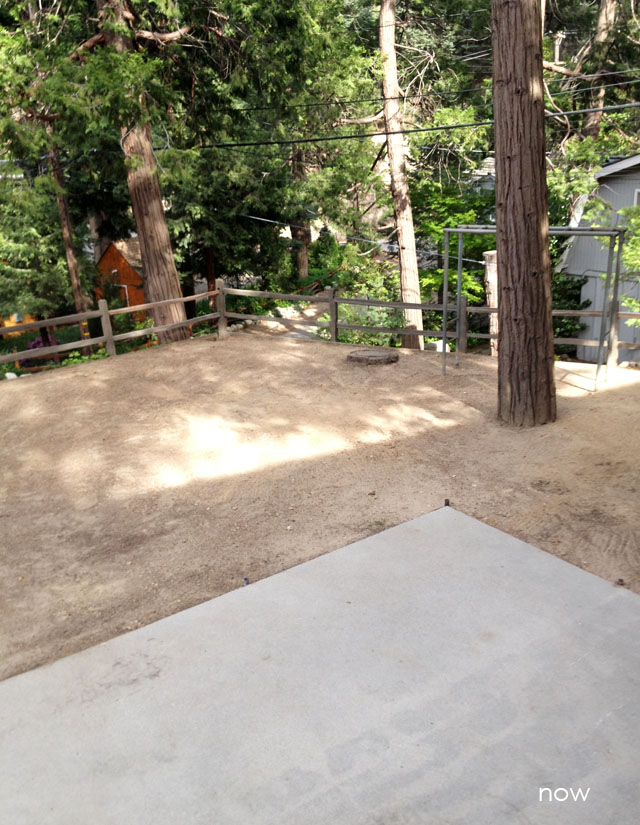 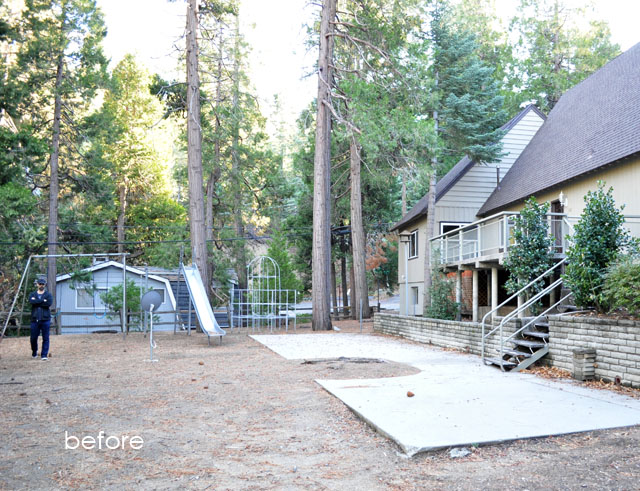 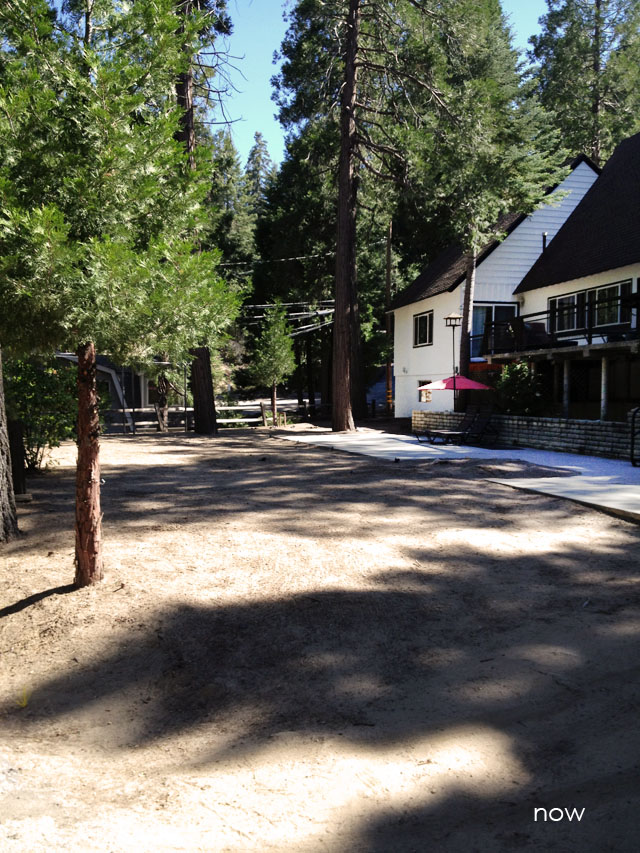 We’re so lucky we have so much space to work with and in this area, a flat/level ground rather than built on a hillside like many of the homes up here… and the removal of the playground really opened it up. But now we have to figure out what we’re going to do with the space. I always grew up with a fenced in and private backyard, so it’s a little bit strange to not have that at the moment. But any house you see in in the distance is not occupied full-time. They’re all second homes to our neighbors we see on the weekends, and maybe only twice a month. So the area isn’t really the kind of place you “need” that same private yard, but I just feel so vulnerable without it. It’s next on our list of renovations and I’m so hoping we get it done before the end of Summer because I’m dying to do it. I also think it will really “finish” the look of our house and then landscaping will follow.

But as far as landscaping is concerned, I have no idea where to even begin with this space.

So in the mean time I’m Pinning patios and decks and outdoor living spaces like crazy and watching just about every single show on HGTV and DIY networks soaking up ideas on how to use this space both functionally and pleasing to the eye.

But for now, it’s so nice to look out the windows and not see an old playground rotting away. 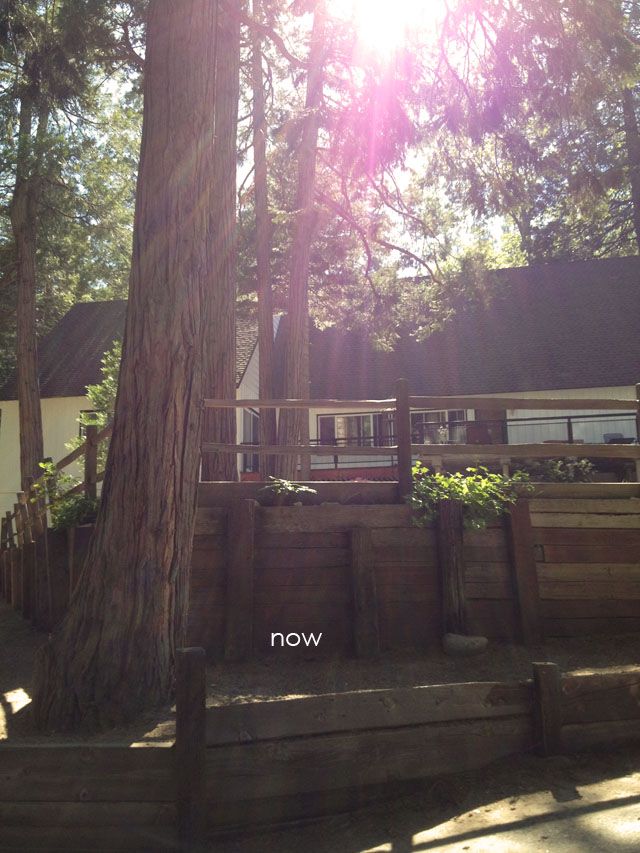 * Exterior Paint Before and After
* House Hunting
* House Story

We’ve spent the past two days with a team of movers, packing and loading and packing a bit more, and now we are officially…