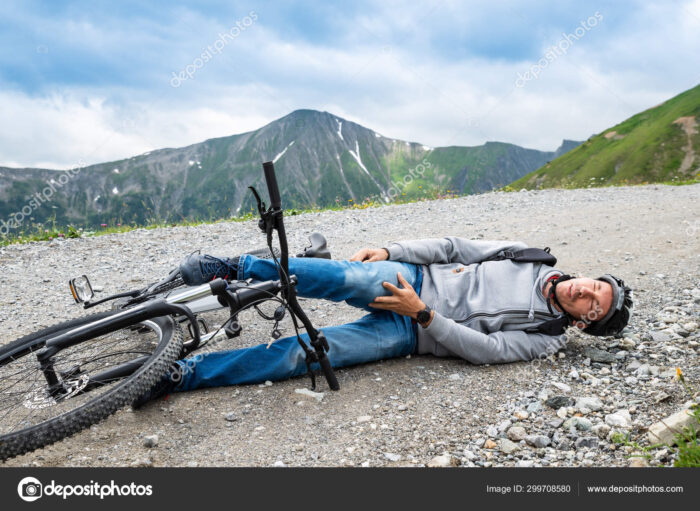 not my photo but similarly depicts the scene

I take the hills to work. Usually, Beverly Glenn to Benedict Canyon or Coldwater Canyon. Either way, I have to get to Mulholland and start making my way down to Sunset and through 90210. This morning I was late {well, actually, I’ve been late every day since school started because I am failing to leave early due to heavier traffic} so I took a sneaky back road through the hills and was trying to catch up to a black sedan ahead of me. Half way up the hill, the black car slowed and came to a stop and then I realized there was a man on a bicycle lying on the ground on the side of the road who looked to be unconscious.

We both stopped {black car and I} and he got out to see if the man was okay and yelled for me to call 911. I yelled back “It’s already ringing” via the bluetooth in my car radio. Another woman coming the opposite direction now stopped but cars were starting to back up behind me and drivers were getting angry …because this was the sneaky fast route.

So now I’m talking or rather, yelling at my radio {bluetooth} to 911 and yelling out the window for the street name and address we are at and emergency cuts out. Radio back on. SHIT.

At this point, the cyclist still lying on the ground, was only randomly twitching and waving his arm around, started to try and get up. This poor guy was a mess! He could barely stand then couldn’t gain balance but fumbled over to the other side of the hill and sat down. He was shaking and all scraped up and looked utterly confused and in shock.

I have to admit, I was kind of freaked out. What was he gonna do? What was gonna happen? The fire dept. then rang through and I answered and told them the situation but by this time the guy said he was okay …but honestly, he did not look okay.

The fireman said they were still going to send someone out but now the cyclist was standing and telling me no, he did not need them and he lived right up the street and had a cell phone.

Someone gave him a water from their car and he looked to be gaining composure. So, we told the firemen never mind, made sure he was okay, then continued our drive to work.

At least I had a good excuse to why I was late this morning. But man was that weird!

When I was telling hubby about it on the phone, he said that the guy probably had a seizure causing him to lose control and fall down. I hadn’t thought of that really. I thought he must have hit a rock or a car hit him and kept going. I’m sure the guy had no idea what happened either.

Could you imagine if a car hit him and kept going? Who would do such a thing? Again, just speculation but still, what if?

What’s also a bit strange is this morning I read a great story on this blog about a man who became epileptic after he stopped taking Xanax cold turkey and had a seizure while driving his car! OMG! How scary is that? Total loss of control. What do you do?