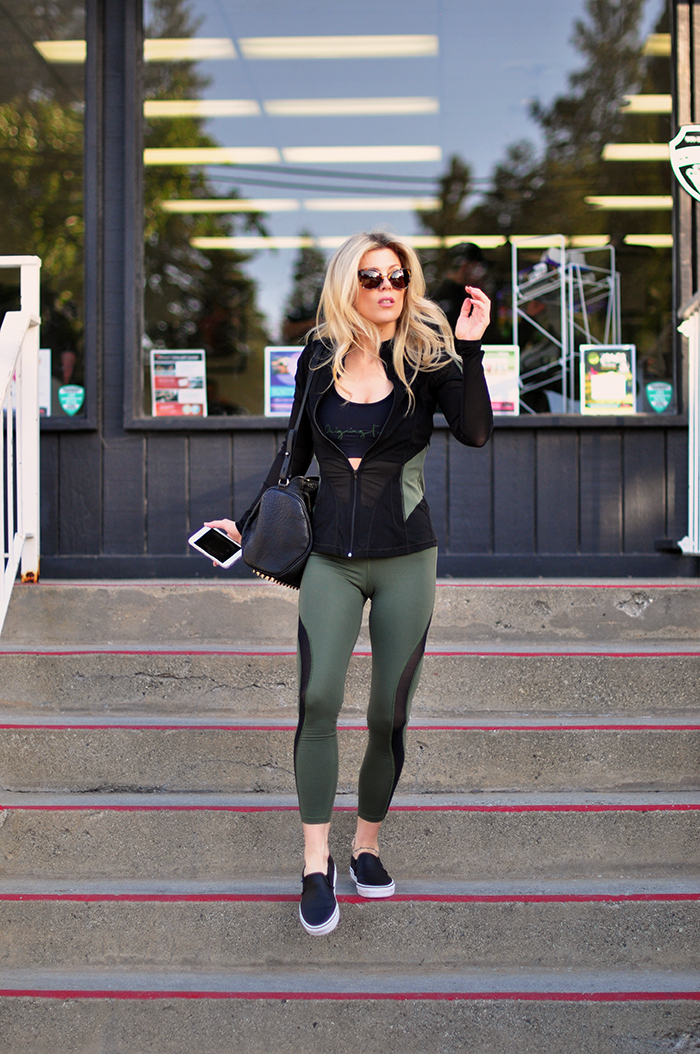 * Jacket, Tank, Pants all by Reigning Fury (and all on sale now!)
* 3.1 Phillip Lim tortoise shell Sunglasses
* Alexander Wang Rocco duffle bag (I think this size is only available now via resale, links in the shopping widget below)
* Perforated leather slip on Vans

* Title: Marshmello ft. Bastille – Happier But we run our course, we pretend that we’re okay… Now if we jump together at least we can swim… Far away from the wreck we made

First and foremost, I think it should be mentioned that the iPhone camera is far more forgiving (and slimming) than my DSLR camera is (has anyone else noticed that?), but mostly getting a good shot comes almost entirely down to lighting and posing/angles – which, for the sake of the posterior shots, my mom/photographer was laying on her back on the asphalt, in the middle of a parking lot …because she’s my ride or die, obviously 😉

But, to move on to the actual point of this post, which is to set some fitness goals for myself for 2019 and forevermore, of course… I give you photos from the past, as goals for my present. 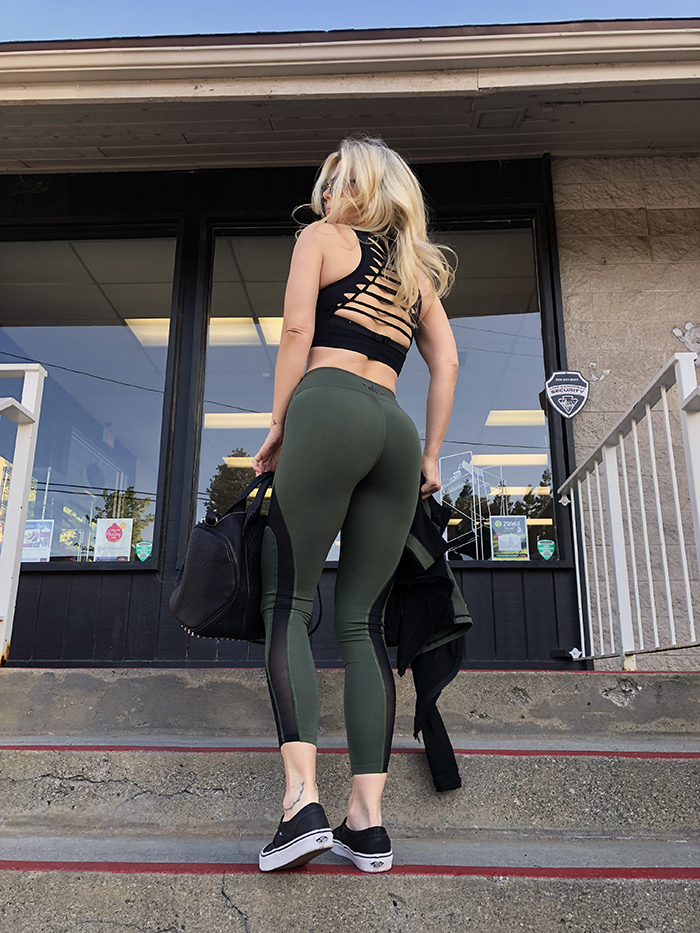 These photos were shot way back in May 2018 (around the same time I shot the red look at the local laundromat), when clearly, I was in better shape (and weighed a few lbs less) than my current reality. It’s just a few lbs but mostly, I don’t feel as fit or as tight or as strong as I did then (or when I feel like I was really at my best physically, which was 2016) and there are an handful of reasons, or excuses, because let’s be honest, that’s what they are.

Of course I can blame the holidays, but it all started before then really, and I think while there are clearly things in my life to blame, the point is that my priority towards health and fitness has taken a backseat to the stress in my life. And I want to change that NOW.

If you’re a long-time reader, then you know what I’m talking about; 2018 was a damn stressful year. In fact, 2017 was as well. And now that I feel like I’m finally rising from the mud, even if it is very slowly, I want to prioritize health and fitness in the way that I did when I hit the ripe old age of 38-1/2… just over four years ago. (I’ll be 43 in June this year)

It was December 2014 and everything changed. The four months prior of daily meditation practice had almost completely healed my mind/body of my sometimes crippling anxiety and panic attacks. Yes, I was cured. I felt like a new woman. A new person. I felt alive and free finally from my own horrible entrapment.

But that kind of life-altering change creates other life-altering changes without warning. At the same time however, I was ALSO a year and a half away from being 40 and suddenly my motivation was to be as strong physically as I finally was mentally going into my 40th year of life. I also knew that time is not always on our side when it comes to health and our bodies and I knew that if I didn’t really start prioritizing health, it wasn’t going to get any better. Though I did want to feel strong again, if I’m being honest, my goal at the time was probably more on the visual physical side than anything else. I wanted to look better than ever… which is probably quite common in that little age box I’d say.

So I took control of my health and set fitness time-stamps on my to-do list every day. I walk/hiked for about 30-45 minutes 4-5 times a week (sometimes more) and did a stretch/yoga/strengthening workout before bed every night. When we opened Dogwood last April, I didn’t have time to walk/hike anymore, but I was running around serving and bartending almost every day for three months and that kept me in pretty good shape, cardio-wise. But there’s just something about walking the hilly lanes around my house that does wonders in lifting my butt. I swear in even just a few days of walking the hills, I can see and feel a difference and even though I also include butt workouts in my evening routine, there is NOTHING that lifts the glutes like walking the hills at a pretty decent rate. Well anyway, the long shifts and hours at the bar also kept me from my evening yoga and strength training because I’d get home so late and be so exhausted I could literally do nothing but crash.

Since then though, my hours have changed drastically, in fact, I’m rarely at Dogwood anymore, and do all the business work for the bar from home. But now with winter in full effect, between the freezing temps and the early evenings, if I don’t get out by 3pm to walk, it’s a lost cause. So lately I get maybe 2 or 3 walks in a week if I’m lucky for maybe 30 minutes.

Those have been my very legitimate excuses. But excuses they still are.

Since it’s January and we’re probably all spending the month contemplating our past year’s wins and losses and setting goals for the new year, while I rarely set resolutions, but aim at accomplishing goals, health and fitness is at the top of my list again. Yes, it should always be a priority because we’ve only got this one body to make it through life with and if we don’t keep it up, it won’t keep up with us. We know this, which is probably why we feel so guilty when we don’t respect and honor it the way we should.

So I’m going to fight my excuses each day and shut that little voice up that gives me all the reasons why I shouldn’t do it and just do it. I know I will feel better in more ways than one, so regardless of the challenges it may present, once it becomes a habit, it’s just part of my daily routine again… and then boom, it’s part of who I am. 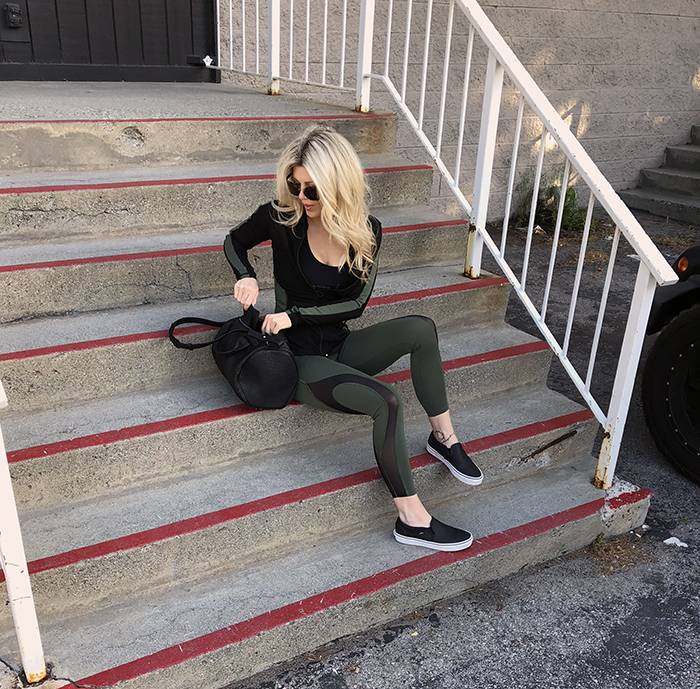 What’s crazy to think about – which I realized whilst writing and thinking about all this is… 38-1/2 was just 4 years ago (December 2014)… and it feels like a lifetime ago.

So much has happened since then, that it really puts life into perspective in a way. So often we think whatever is happening to us in the moment is going to be FOREVER, rather than a TEMPORARY situation, because it feels so hard, weighs so heavily on us, and is such a challenge that we think we may not make it through and it’s ALWAYS GOING TO BE LIKE THIS. Then upon looking back, we really see just how fleeting everything is.

For instance, since turning 38-1/2 (I’m telling you, it was a pivotal age/moment in time that December), I have written 3 first drafts of three different books, yet haven’t gotten any further with them because I know that editing them will take far longer (and more brain power) than writing the first draft did… and then the fear comes rushing in and the doubt and the questions like “Who am I to write a book?” Who will even care? What if it sucks? Can I help just one person by sharing my story? …the list goes on.

My husband and I separated, he moved out and a year later we were divorced.

I have lost business, I have gained business… gained friends and lost a few, and met about a million new people in between.

My living situation is very different, though I am technically in the same house. Just not alone in it any longer and now there happen to be a few children in my life on the regular.

Everything is different, yet all is the same in the way that life throws you great opportunities, then curveballs, then avalanches, then glimmers of light, then all the light, then too much light, and then you pick and choose and find balance if you can with all the newness while still trying to wrap up the old life all the while trying not to be bitter about who “wronged” you… because in the end, it always turns out right.

It has been truly bizarre. I asked for new life adventures, and it has been a wild ride ever since. So many ups… so many downs, yet I feel like I still haven’t truly broken through to the other side, the next life so to speak. I’m floating in limbo between the past and the present without a real glimpse at my future, which is an odd feeling, but mostly because I won’t commit to it until my past is no longer my present.

There were times I was begging for it to come knocking at my door and other times I knew I was in the midst of creating it. Times when I wanted to give up and quit everything and times that felt so promising my gratitude meter was overflowing and I didn’t know what I had done to deserve it all.

Still in the tornado of my chaos that is NOW, there are more and more moments of peace and fewer chaotic windstorms, which is also promising. Knowing that my current reality has at least swapped to lean more positive than negative means things are looking up, getting onto a new track and releasing the old bits little by little.

So patience now is my best plan and steadily moving forward… working hard, setting goals and staying on track, practicing little by little each day for all those little wins that slowly build up the confidence where it has been chipped away over the past few years – is also my goal.

Focusing on what isn’t working isn’t working anymore. So for now, I focus on the tasks at hand and find a lot more light when not so long ago, there was so much darkness. 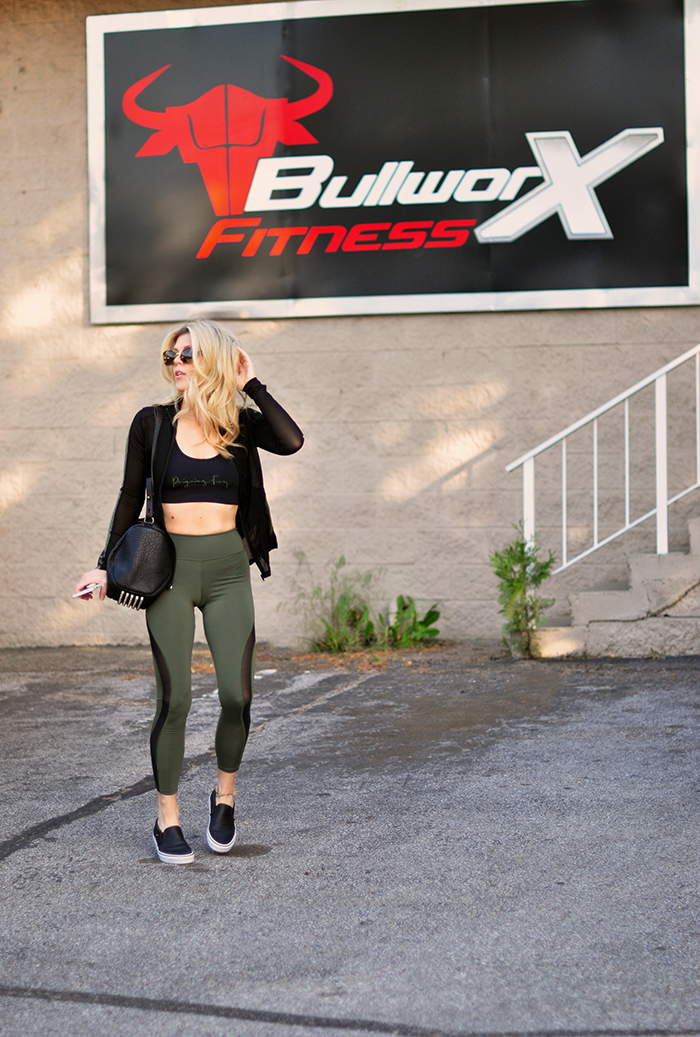 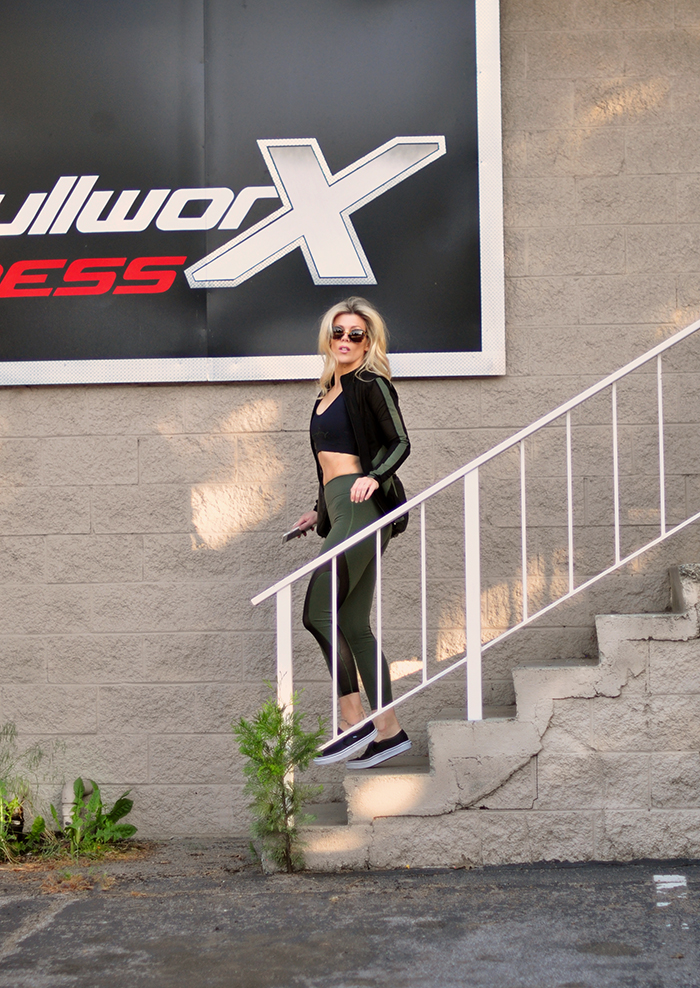 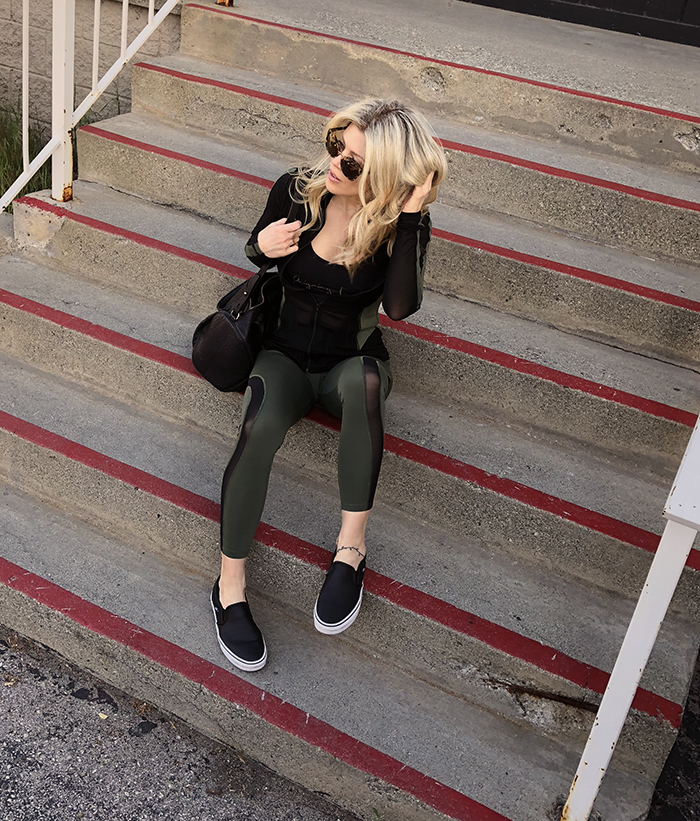 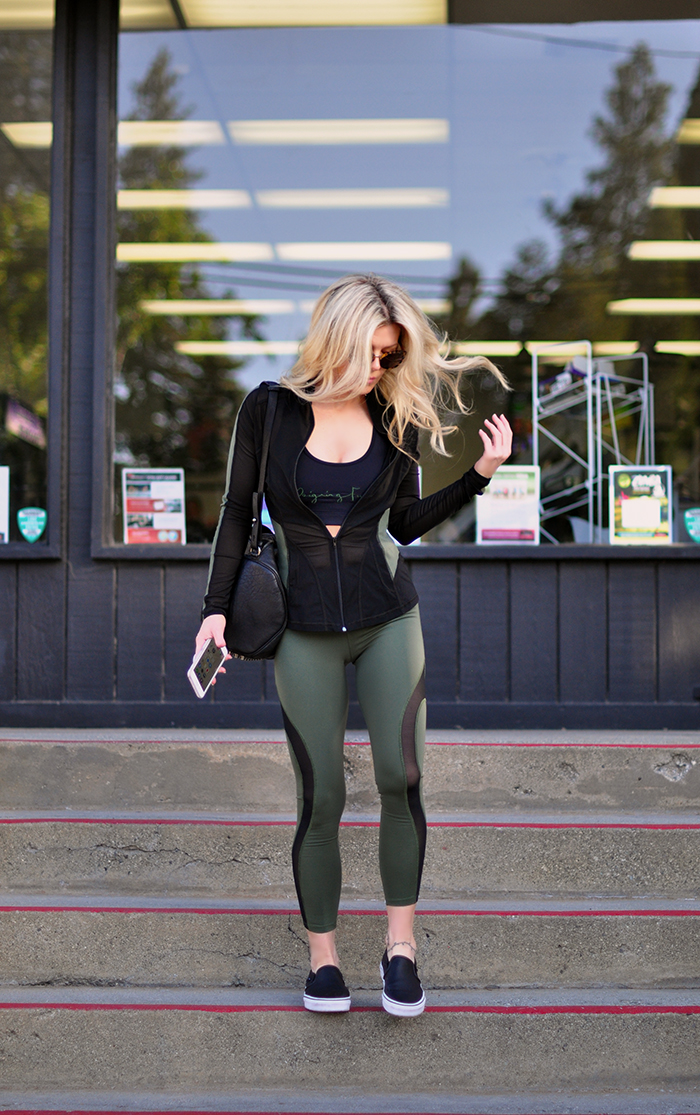 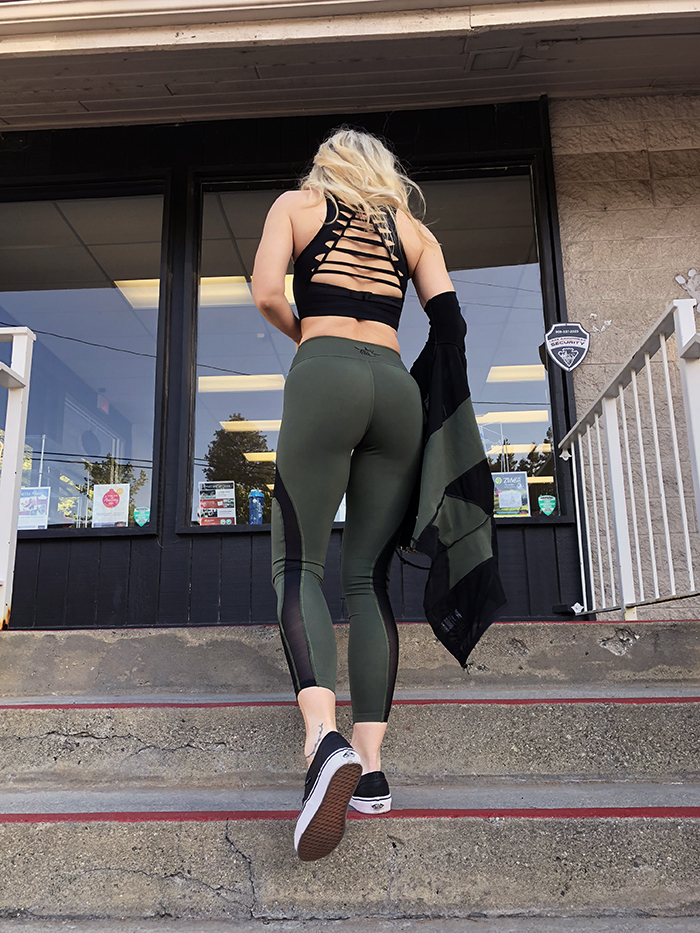 It’s all about the angle, ask my mom 😉

* Recipe by guest contributor Laney Schwartz, creator of Life is But a Dish Because citrus cakes are liiiiiife! You guys, I’m obsessed with…