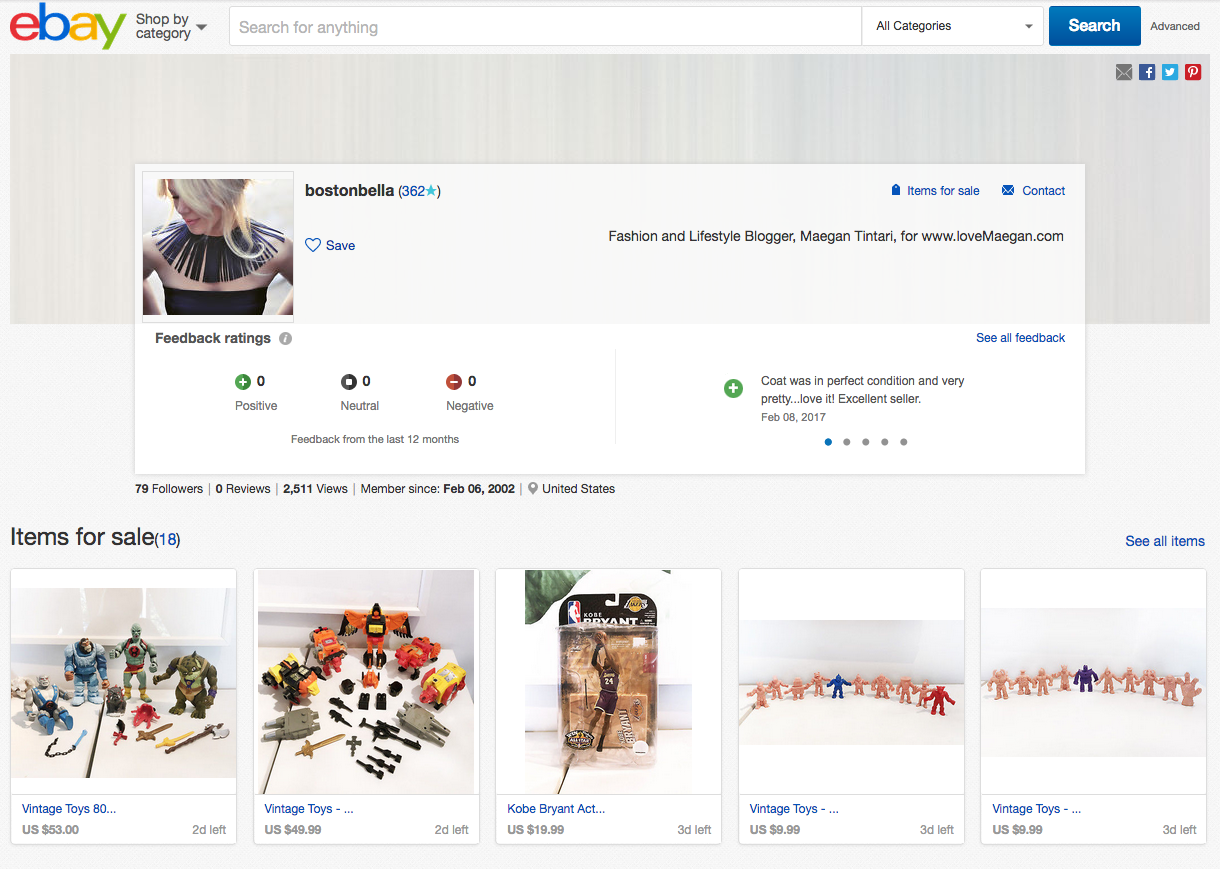 Lovecats! Sorry I’ve been MIA! I’m on a Mission!

I have FINALLY tackled the “getting rid of the ex-husband’s stuff” portion of my life (yes, I know it’s been almost 3 years since he left and almost two years since my actual divorce) BUT since he left literally EVERYTHING behind, I knew it was going to be a very big, very time-consuming project, and so I’ve put it off for what seems like forever.

And suddenly, I just decided to really tackle it. I’ve actually tackled it a few times; have donated more boxes and bags full of stuff to the local Boys and Girls club than I can count and was left with what I thought might be valuable… but I just couldn’t bring myself to prioritize it and get it done.

I think I finally started actually doing it around the 1st of the year and have been at it ever since. I began listing his vintage toys from the ’80s, (which for the record, were packed away in boxes in the garage, not out on display) but I felt like it was a good place to start. I dreaded the time I knew it would take sorting and photographing and listing the items but eBay has really changed and upgraded since the last time I sold anything (fun fact: I used to buy and sell vintage many many moons ago and once found a vintage leather jacket for $20 at a thrift store, had it cleaned for $20 and sold it for over $800). But now, since it’s so much easier, the hardest part about listing these vintage toys is researching what they are and which parts go with what and that has taken HOURS. I’ve also made many mistakes listing items incorrectly, and after finding other parts, etc., have had to rephotograph and re-list items as well. PHEW!

But I have to say, while I have been utterly DREADING this for 3 years now, it’s actually been kind of fun! I know that sounds weird, but not only am I finally getting his stuff out of my house, I’m making money, so it’s a WIN, WIN! I’ve also been saving little shipping boxes down in my garage to re-use to ship all the stuff in, so getting rid of those is making me happy too.

Whenever I need a little motivation though, I listen or watch or read Gary Vaynerchuk talk about how he still loves flipping stuff on eBay (despite being a millionaire, of course), buying it for nothing at garage sales and then selling it on eBay. He even had a “2017 Flip Challenge” to see who could sell $20,017.00 worth of stuff they just found around their house and I was like OMG I’M ALL IN! It was the perfect motivation I needed, but I was too busy last year with Dogwood opening and clearly it wasn’t motivation enough. But lately, it’s been working.

My eBay username is bostonbella – (I know, odd, mostly because I’ve never been to Boston. But admittedly, I joined eBay way back in 2002 and at the time I had two Boston Terriers named, as you now may have guessed, Boston and Bella. They were both rescues and Boston was an easy name to give him. Once the B names began, they didn’t end. Bella came second and Billy was third.)

…and so, if you want to take a look at how I’ve been spending my time the last few weeks, check out the items I’m selling and tell anyone who may be a collector that I got the goods!

I’ll be listing more toys, new and vintage as well as sports memorabilia and jerseys and a little bit of everything that some dudes seem to love.

I’ve had a few questions on my IG stories about selling my own stuff and I might just… eventually. I actually have a stack of shoe boxes filled with shoes in my office sitting across from my desk that I’d like to sell (mostly because they’re either too big or because I basically don’t wear heels anymore) and I have two closets upstairs filled with clothes I also want to sell AND I need to do another closet cleanout before March as well. So we’ll see how it goes. I want to get all of his stuff gone first and then I’ll focus on my own. It may just be like a two month selling frenzy, but hey, as Marie Kondō says, “Keep only those things that speak to your heart. Then take the plunge and discard all the rest. By doing this, you can reset your life and embark on a new lifestyle.” and I think she’s right.

* Hope you are having a wonderful New Year so far!

On Underwear: g-strings VS bikinisbecause I just can’t call them "panties"

If you haven’t noticed {or maybe you have}, I’ve been blessed with a big ole butt which thanks to LL Cool J and Sir…