A few weeks ago I started speaking with a life coach. It was my alternative to traditional talk therapy, which in the past, has never really benefited me for one reason or another, but mostly because after being asked about feeling important, one psychologist nodded off to dreamland in the middle of my response. So I thought I’d try something new and this woman came highly recommended. We’ve only had two phone sessions, and they’ve been fabulous, so I’ll touch more on this later since it’s all so new.

A few weeks prior to that, when my mom was visiting over the weekend and helping me through some anxiety ridden sleepless nights, she mentioned wanting to read a book called The Untethered Soul, which was recommended to her. So I logged onto Amazon, grabbed one for her and I, and also picked up a book called Living Your Yoga, and a book called The Gifts of Imperfections, without looking at the author because it popped up as “recommended” along with the others I was purchasing.

I still like to read hard copies of books vs digital. There’s something a little romantic about it for me and I look at enough screens and monitors all day long so I feel like it’s giving my eyes a break as well.

Last week was my second session with my new life coach and soon after our discussion ended, she emailed a Ted Talk given by Brene Brown, who spends much of her time researching shame and vulnerability. I didn’t get a chance to watch it until a few nights later, but when I did, I was blown away by what I saw. And then when my books arrived, I realized I had ALREADY purchased Brene Brown’s book, and I just LOVED the serendipitous feeling of it all. I love when I’m in a place in life where everything feels like it’s “supposed” to be happening and I’m awake enough and aware of the moment to be grateful for it.

Go to Brené Brown: The power of vulnerability if you can’t see the video below.

Here are the notes I jotted down while watching…

Connection is why we’re here. It’s what gives us purpose in our lives.

Shame is easily understood as the fear of disconnection.

This “I’m not _____ enough” = excruciating vulnerability.

Have the courage to be imperfect.

What makes you vulnerable makes you beautiful. It’s necessary. It’s fundamental. Being vulnerable is a strength not a weakness. Emotional risk. Exposure. Uncertainty. Our most accurate measurement of courage.

Vulnerability is the birthplace of innovation, creativity, and change.

Shame is conflicting expectations about who we are supposed to be.

Shame is the birthplace of perfectionism.

Believe that you are worthy of love and connection and belonging just the way you are. Stop being afraid of failing. 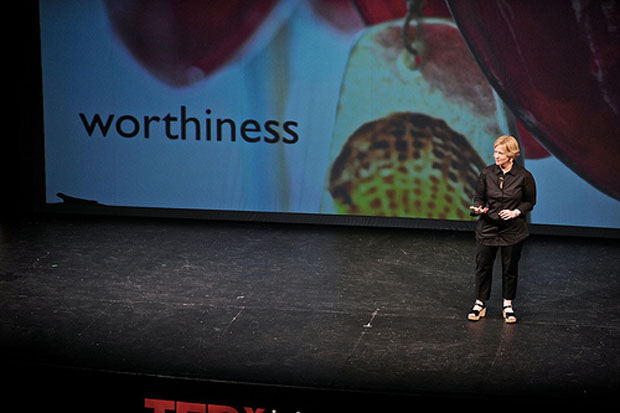 And then I really thought about it…

Being vulnerable IS my strength, NOT my weakness… I realized the opposite was the core at which my anxiety began back in my mid twenties!

I couldn’t believe the revelation I felt I was having as my brain swirled around this theory.

When I thought back, I remember I suddenly became afraid of people and didn’t want to connect. I didn’t trust anyone. I didn’t trust myself. Suddenly I became an introvert when all of my life up until that moment I had been an extreme extrovert. I didn’t know who I had become or what had caused it at the time but as I watched Brene Brown talk, a memory popped into my head which I’ll share with you now: my then-boyfriend returned home after we had just moved in together, and said I ran into so & so today and she said Oh remember that OBNOXIOUS girl you were dating? And he replied I STILL AM DATING HER. But what hurt me most was that not only did he NOT defend me, but he agreed with her! And then upon relaying the story to me, he told me he had agreed with her during their conversation and confirmed in person, to me, that I was obnoxious.

And as he told me this story, I shriveled inside.

I was dumbfounded. I remember thinking Well I don’t think I’m obnoxious. AM I OBNOXIOUS!??! Does EVERYONE THINK I’M OBNOXIOUS!??! WHO AM I SUPPOSED TO BE NOW!??!

From that moment on, I replayed every incident back in my head in which I could have been construed as obnoxious. In every situation, with every person we ever hung out with, and I was overcome with dread and shame. I turned inward. I stopped going out. I became anxious and agoraphobic and didn’t leave the house for some time and when I did, I had extreme anxiety about it. I was suddenly worried about what everyone thought about me and how none of their thoughts about me were good. And then of course, my own thoughts about myself lined up with the horrible negative things I was telling myself about how the world saw me.

This random encounter popped into my head as my brain swirled and landed on reasons I became shameful of who I was based on what someone I didn’t even know “thought” about me. It changed my entire world even though I was in my early twenties, and I probably was obnoxious, at a time when I was just blooming into adulthood, I suddenly had no idea who I was… but I certainly didn’t want to be OBNOXIOUS.

Over the years I worked through much of it by avoiding things that caused anxiety and through reading positive healing books and for the most part, it worked. I also broke up with that person who made me so confused about who I was, who I was supposed to be, and who HE wanted me to be. And now being with someone who is so supportive and allows me to be whomever I am or whoever I think I’m supposed to be and loves me even knowing all my flaws, I can see how it was so much more than what one random girl said she thought about me.

But every now and again, as I’ve mentioned here and there, the anxiety pops up again, usually when I’m feeling like I’m not being true to myself in some way or another. And over this past Summer, I’ve had to deal with it on and off. First with Vertigo, then last month with sleepless nights and nervous days. But as I watched Brene talk through shame and vulnerability, I realized, it was at the core of every issue I had, and continued to keep me from connecting with people. At a time where I really feel the need to connect again and make new friends in our new land, this could not have come at a better time. I am so grateful for my life coach and Brene Brown for showing me the light. Maybe you can find it within yourself too.

This is her more recent Ted Talk Brené Brown: Listening to shame which I loved just as much, if not more.

This is a sponsored post & FAB giveaway on behalf of Walgreens and P&G… All opinions are my own!   I loved the major…