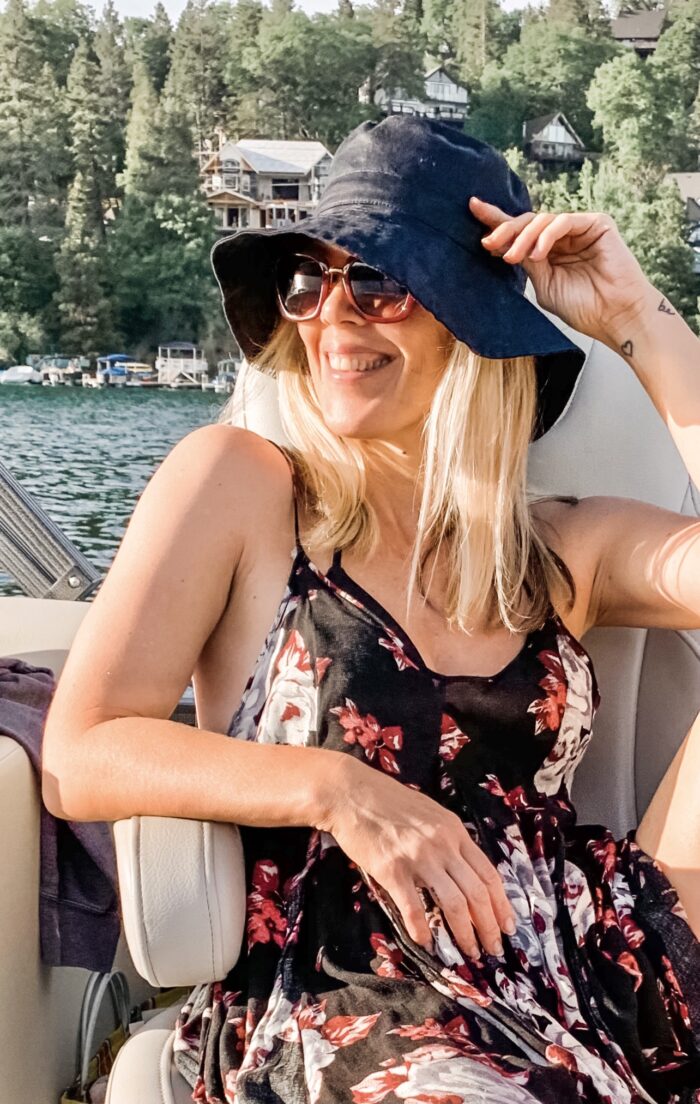 BUT FIRST, OUTFIT DETAILS/LINKS 🙂 Dress: Free People (old) // Bikini top ($19 and AMAZING!) I bought it in about 5 colors to mix and match with random bottoms // Hat: OLD black canvas floppy/bucket hat and I think I bought it at a random little shop years ago, I have no idea, but I found it recently and was excited to finally have a good hat for the boat with sun protection that stays on my head // Sunglasses OLD by Marc Jacobs // Reef FLIP FLOPS men’s, because they have good arch support and most flip flops don’t, lol

The day before my birthday (June 1st) was Memorial Day and knowing that Tuesday would be a pretty normal work day for us, Chad and I decided to take a lake day on Monday as a pre-celebratory birthday celebration.

We got ready, drove to the marina, readied the boat and took off. It was the warmest day of the year so far and even though there were clouds in the sky, it was a beautiful day and we were having fun. 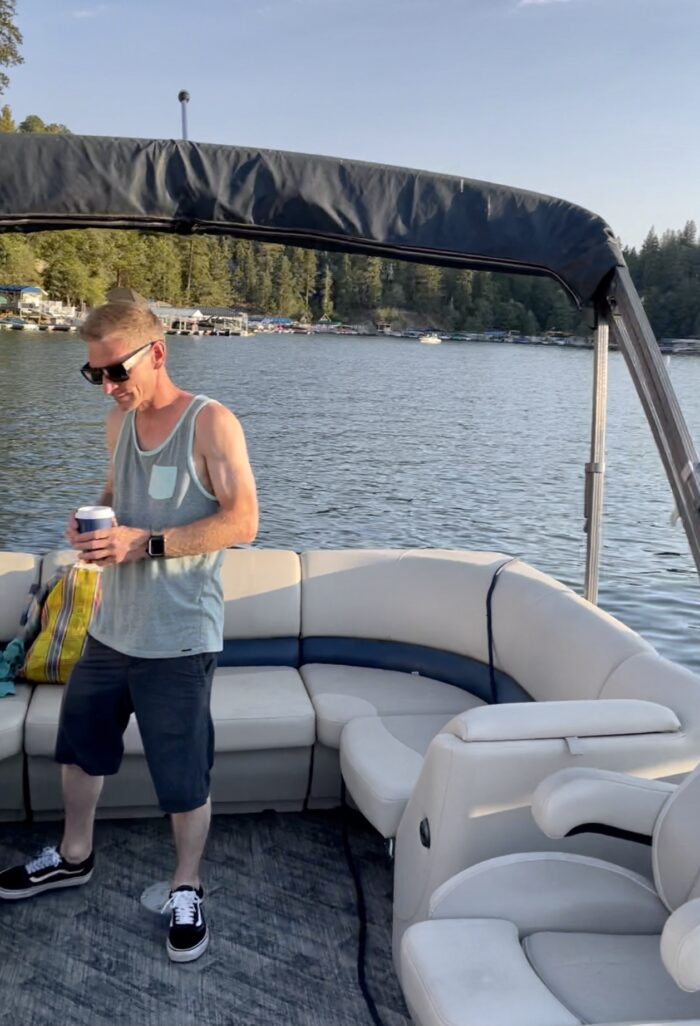 I shared a few Instagram story videos and then set my phone down and covered it with the top/side of the towel I was laying on so it wouldn’t overheat.

About 30 minutes later, after finding the perfect spot and anchoring and enjoying a few snacks, my towel had become the drop zone for my crumbs and I thought I might toss the crumbs into the water for the ducks… And so I picked up the area of my towel where the crumbs were, held it over the edge of the boat and shook…

And then I heard a THUMP… and when I looked down, for a split second before it plunged into the dark lake, I realized the THUMP was my phone hitting the side of the boat as it went overboard.

I couldn’t react fast enough. By the time I leaned over to grab it, it was gone… it sunk quicker than the Titanic. Bad joke? Obviously, but a joke, nonetheless, which at the time would have sent me into tears…

The lake looks black in some areas where it’s deep and we were out in North Bay, which is around 30ft deep (not the deepest part of the lake, but deep enough that you cannot see below the surface) and once the moment set in and I thought my phone was gone forever, the corners of my mouth turned down I started to cry. 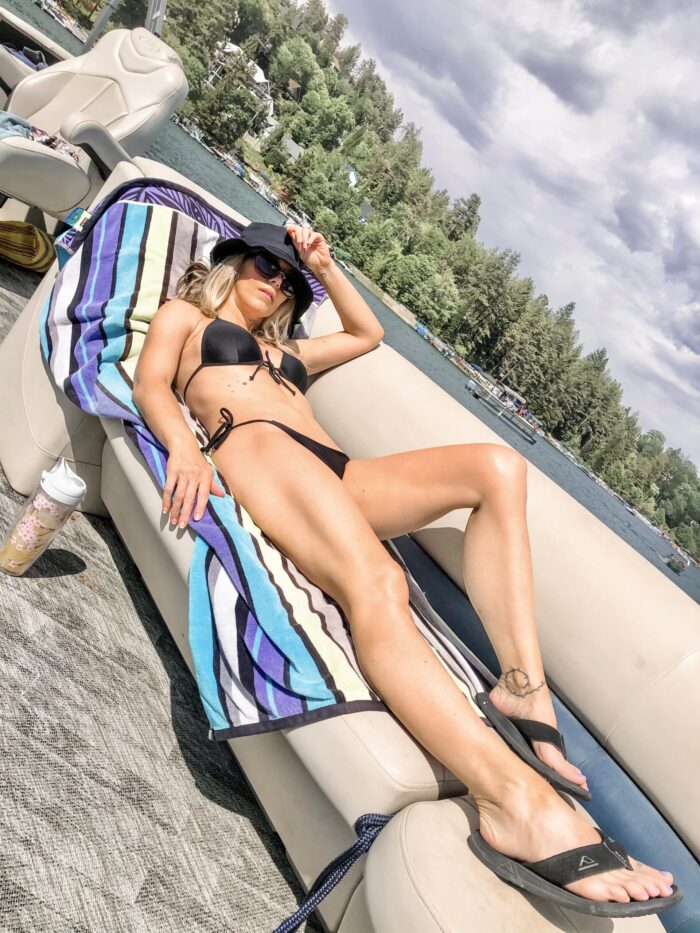 I sobbed actually… like a slow, quiet, shameful, sad cry.

I sobbed in grief over the loss… 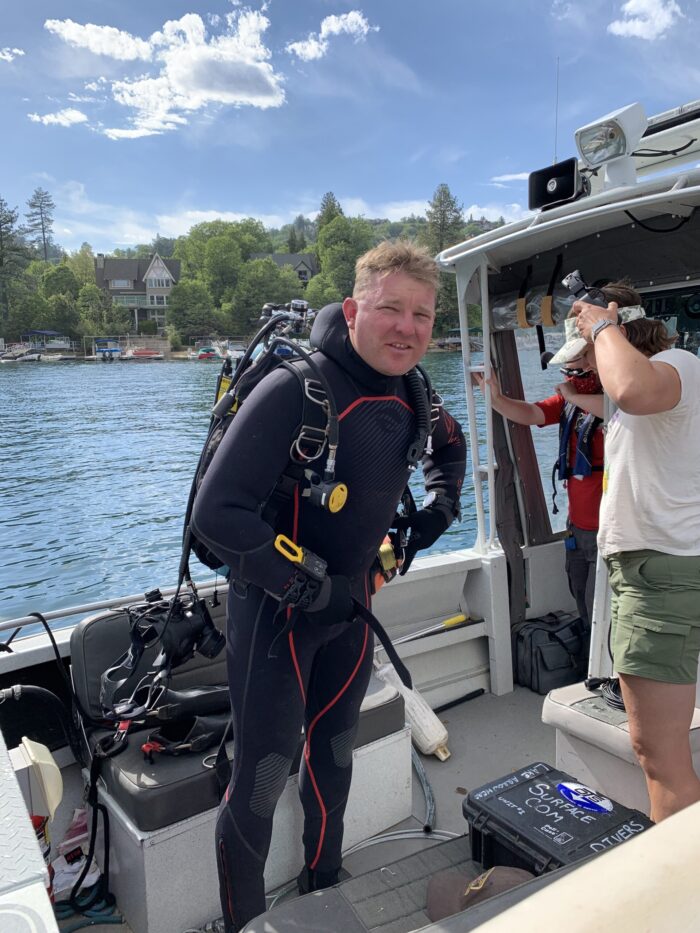 This is Charles and his wife, Mary. Charles is a diver and in fact, he is the only contracted diver with access to Lake Arrowhead and specializes in item rescue and recovery. This means that if/when you drop something of value into the lake, this is who you call (or DM on Instagram – so follow him!) 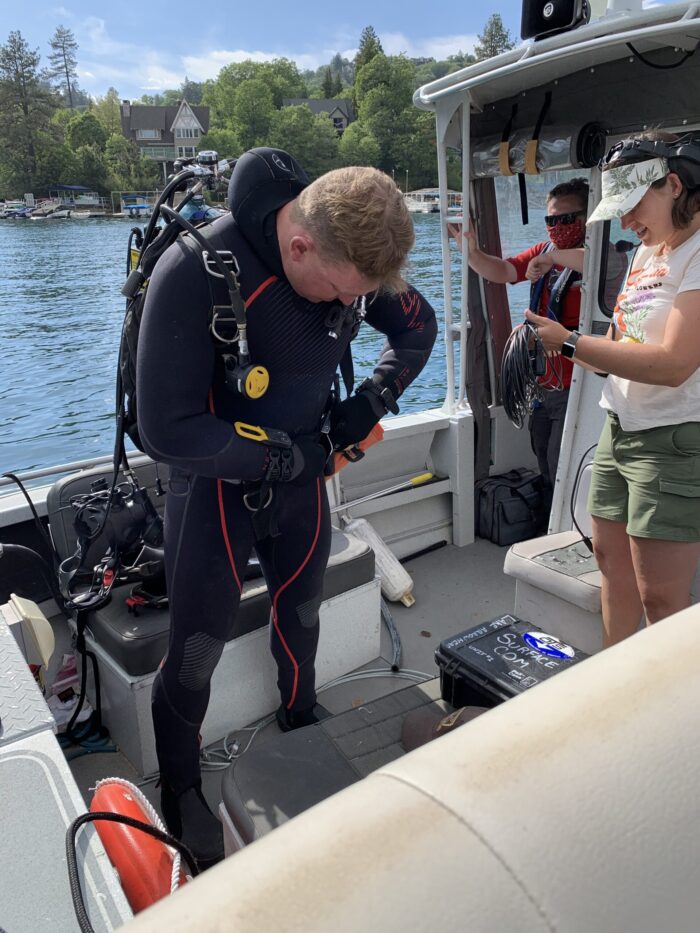 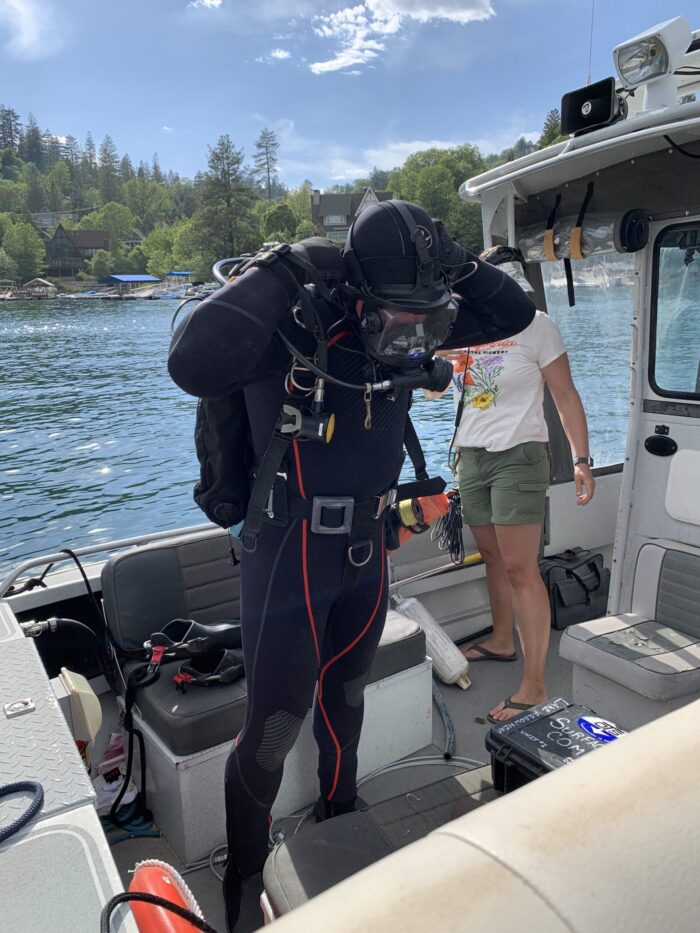 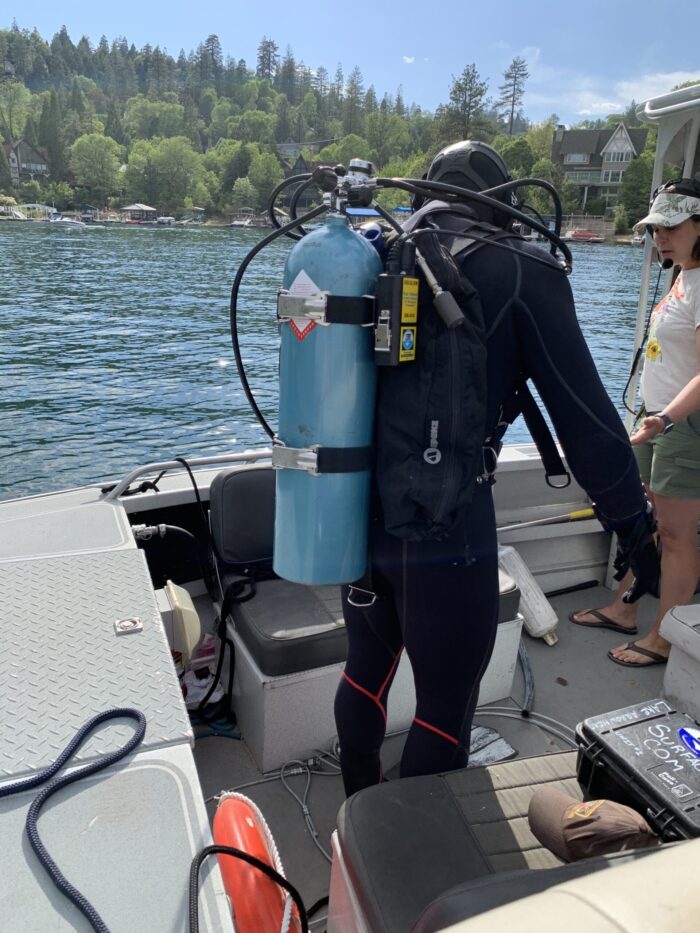 From what I gathered about the recovery process, the team drops a tripod into the water where they think the item might be which has a white ball bobbing on the surface (photo below). Charles dives down and circles the tripod, starting small, then circling further and further out from the starting point… 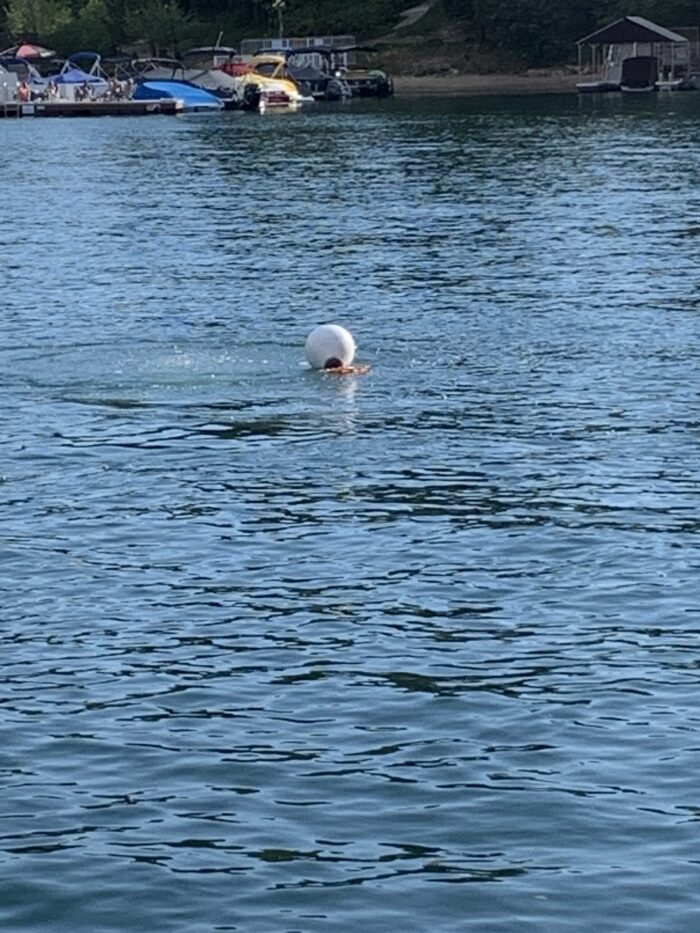 Mary stays on the boat monitoring the process with a headset so they can communicate while Charles is under water (this process might be different in areas that aren’t so deep, like around docks and bays). They did mention that it’s far more difficult to actually find the items in the deeper waters, but not impossible.

After about 30 minutes of watching the bubbles float to the surface, signifying where Charles was beneath, I was starting to lose hope. Mary quietly spoke on her headset and asked me “what kind of flowers were on my phone case?” …which brought the hope back. Charles had found a phone, I just wasn’t sure if it was my phone.

About 15 minutes later Charles emerged from the water holding a large cup… I asked Chad to film everything and take photos since obviously, I couldn’t, but I was hoping for a slow-motion moment where a hand emerged slowly from the water holding my phone up high and proud and then the music would play and the cheering would follow (because dramatic emphasis, obviously), but instead, he had a cup… the hope/disappointment cycle was off the charts for that 45minutes, but as Charles swam to the back of the boat, he pulled out a phone from his wet suit and it indeed was mine 🙂 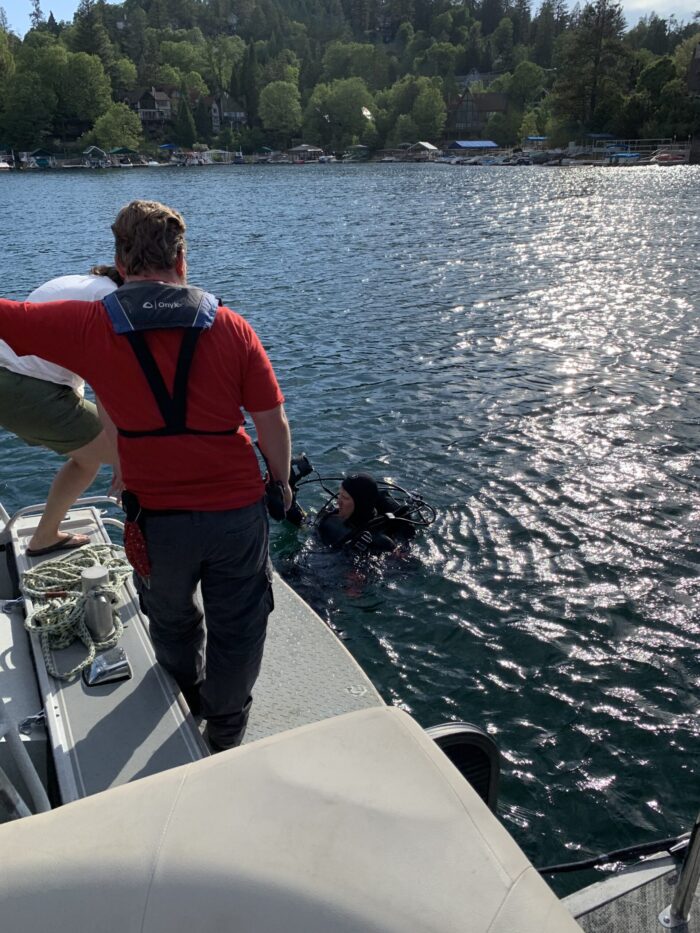 We were jumping for joy, ecstatic and could not believe he found it… people on boats around us were even cheering. When he handed the phone to me, it was still on, asking for my passcode, which I thought was a good sign since it had been underwater for nearly 2hours at by that time.

We boated over to the village to run into Stater Brothers to buy a bag of rice and then boated to the marina and returned back home… Chad was over the moon, but I was still worried about being able to retrieve my content, and I wouldn’t be able to relax until I did.

I think what made this all the more dramatic and traumatizing for me was that the following day was my birthday and I couldn’t communicate with anyone. No sharing on social media, no birthday texts, and worst of all, that I wouldn’t be able to respond to birthday texts with a “Thank you!”, which just left me in a rut. My actual birthday was pretty horrible, not the actual worst, I’ve had a few doozies, but it wasn’t great… 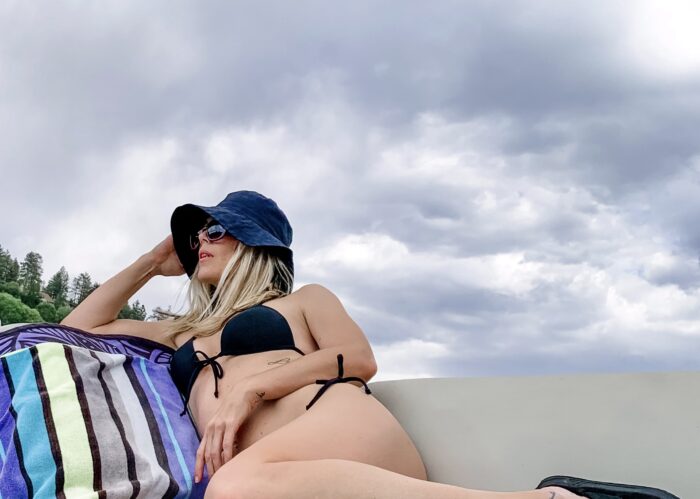 In the next few days, Chad and I made several trips down the mountain to the Inland Center Mall, where we found a woman named Elif, at a little center kiosk (by Victoria’s Secret) called iPhix phone repair (424) 448-5107 and within minutes she explained that my phone would be saved along with all the data. This was after Chad had gone to another repair place that told him we’d have to send it out for someone else to fix it, so this felt like a total miracle. 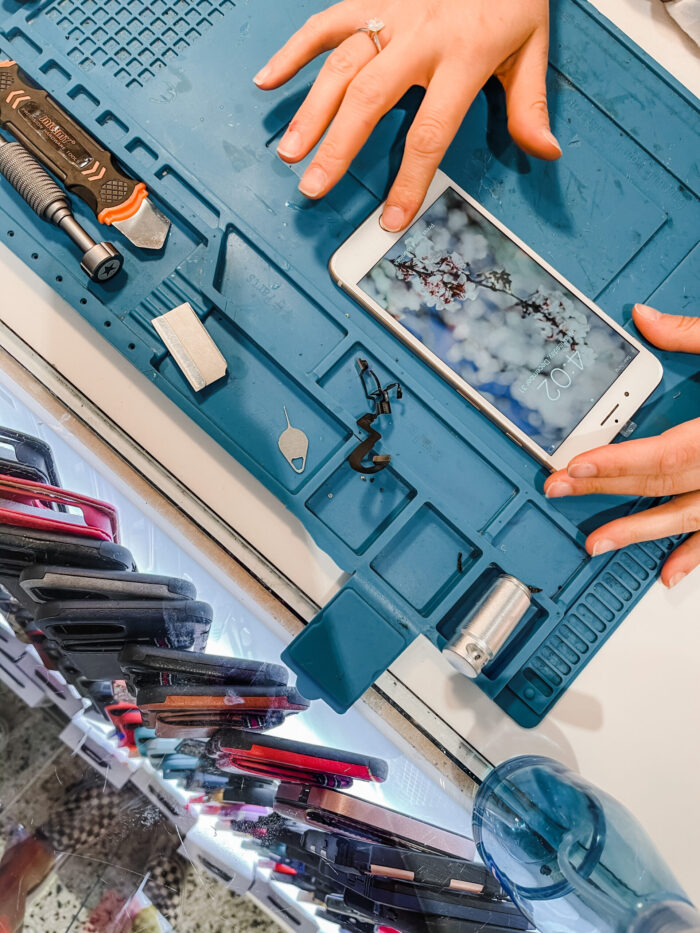 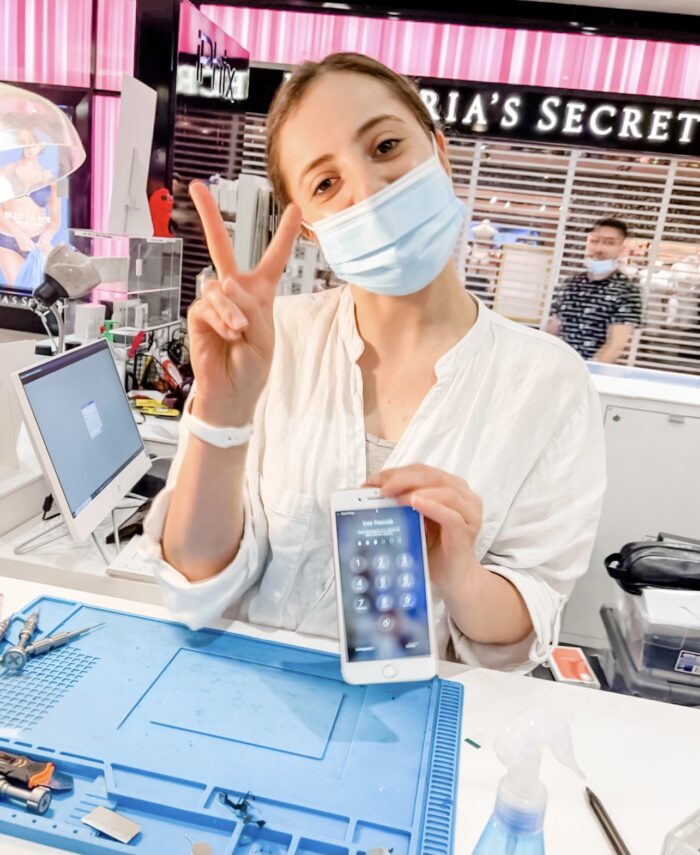 Monday my phone fell into the lake… by Friday, I had a new phone (thank you, Chad) and my old phone and all of its contents back and I was finally smiling again.

Of course it’s only in times like these that we realize just how much we rely on our phones for everything. For me, it was the photos and memories and content (which I still haven’t shared because my blogging is so inconsistent now, oops) BUT IT’S THERE when I need it, and that is comforting.

So What Did We Learn?

1. Back up your stuff (I felt like Carrie in that episode of SATC where she didn’t backup)
2. If you drop something in the lake, there is hope, call Charles (909-754-0738) or DM him on Instagram @lake_arrowhead_divers
3. And then go to iPhix phone repair and ask for Elif 🙂
4. Don’t lose hope… but also, don’t drop your phone in the lake the day before your birthday.

* ALSO… Check out Michelle Calkins video/interview of Charles Debruyn diving and retrieving a lost item in the lake.

Find me on Instagram to see these in real time. …mexican for lunch… …hot pug… …faux fringe hair tutorial… {& cute updo} …houses in…