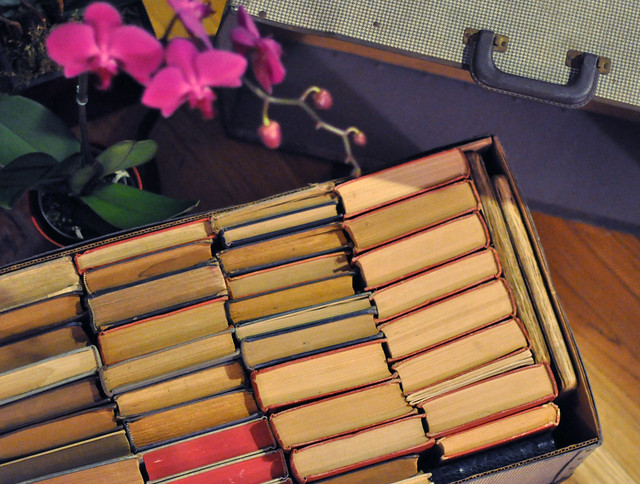 My mom has a slew of filled-to-the-brim boxes of goodies in her garage that she has saved for me over the years, waiting for me to settle into a place long enough to hand them down. Thanks Mom! Over the last year, she has been able to do so because we’re finally in a home large enough to house all my saved treasures. Most recently, she brought over this vintage suitcase full of vintage books which belonged to her mother, my grandmother. 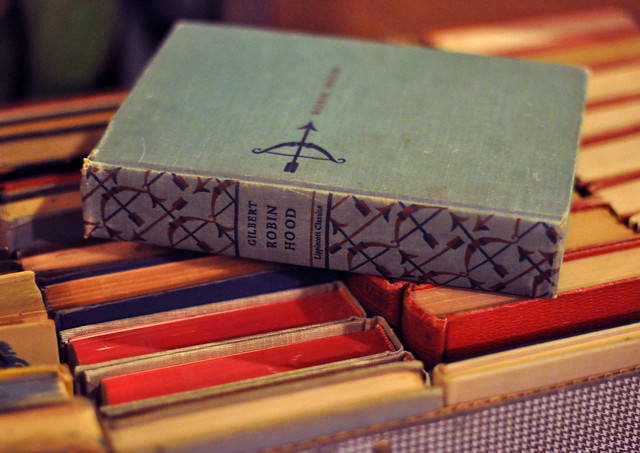 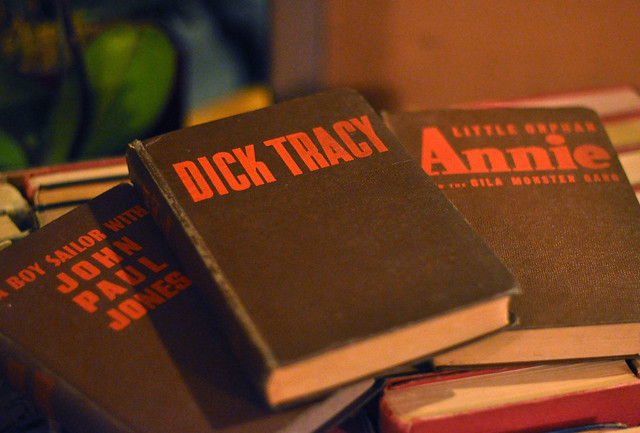 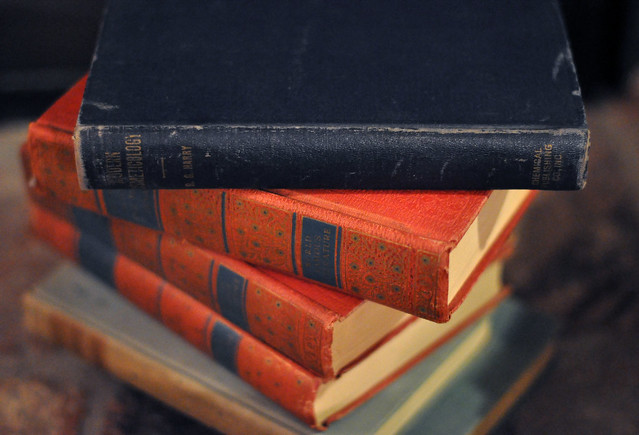 When I first opened the suitcase I remembered why I asked her to save them all for me …because old books are really incredible with details you don’t see in new books {unless they’re meant to look old}. But as I started removing one after the other to inspect each, my eyes darted to the two composition books quietly hiding in the tight space along the edge. 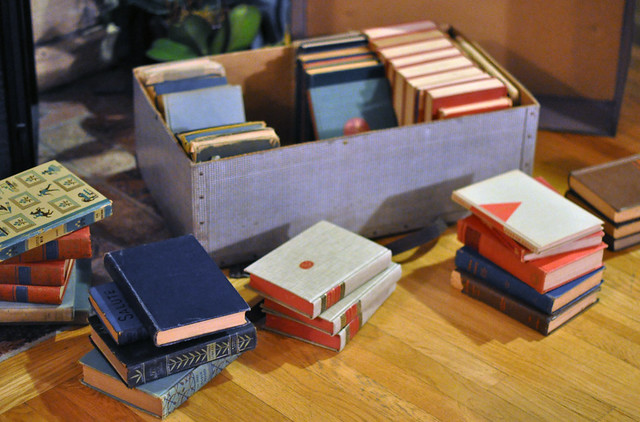 I quickly pulled them out thinking they were some kind of journal or diary how nosy of me, I know but upon opening them found clippings of “movie stars” she admired from her time. One journal says her name, Florence Mattina, Movie Stars, September 22, 1934. Born in 1917, she must have been around around 17 years old when she spent countless hours snipping and glueing and captioning the pages of these books. I mean, I know there was no internet or television then so people had to entertain themselves but this still took a lot of time. I’m fairly sure I have a similar style scrapbook dating back to my eleventh year on the planet that is full of Johnny Depp clippings. I should find that!

These were in her possession in 1934. 1934! It was a different world then. That just blows me away …so I thought I’d share. All the images at the time were in black and white …my grandma colored in the lips and eyes and sometimes the hair as well as added eyelashes & makeup. She added her own color to the black and white images. 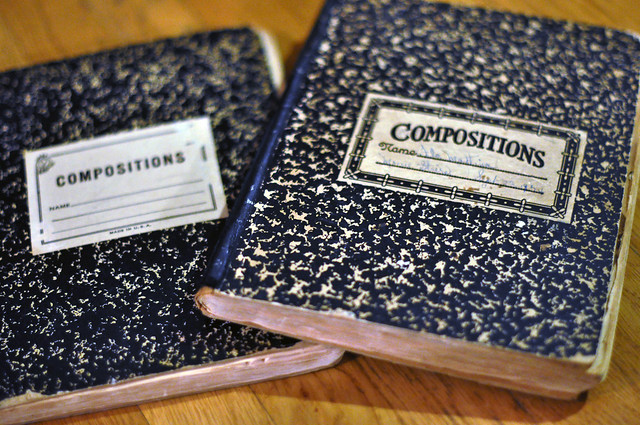 There are pages and pages and pages of Hollywood movie stars, men, women, couples, fashion …I just chose some of my favorites and still this post is photo heavy. Obviously there were no computers then, thus, no photoshop, but they sure found a way to blur out the wrinkles and lines on the men and the women. So even before photoshopping, there was photoshopping. 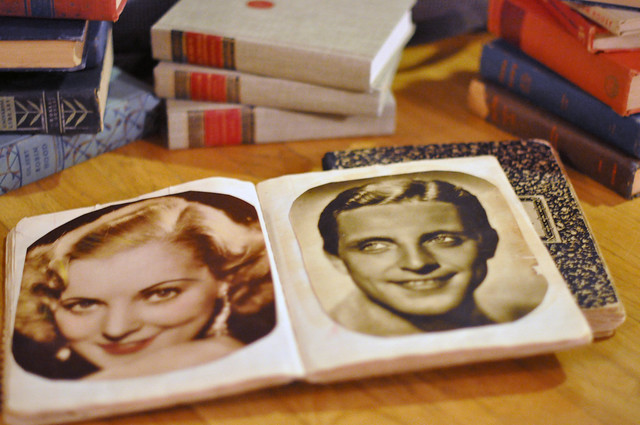 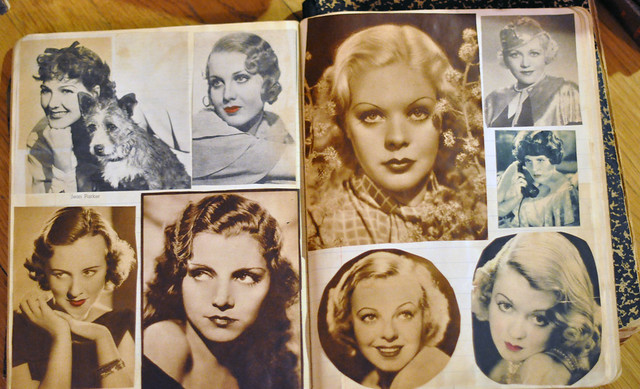 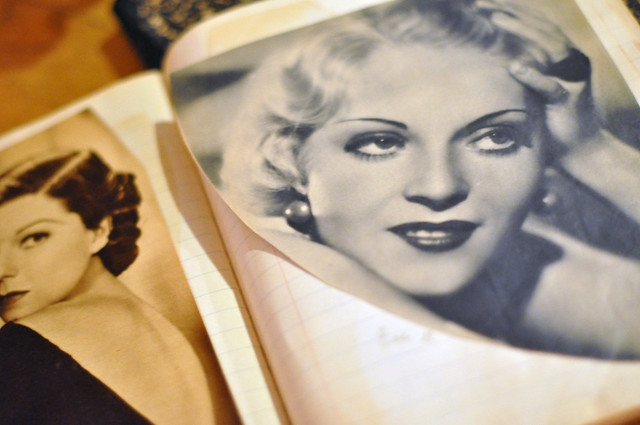 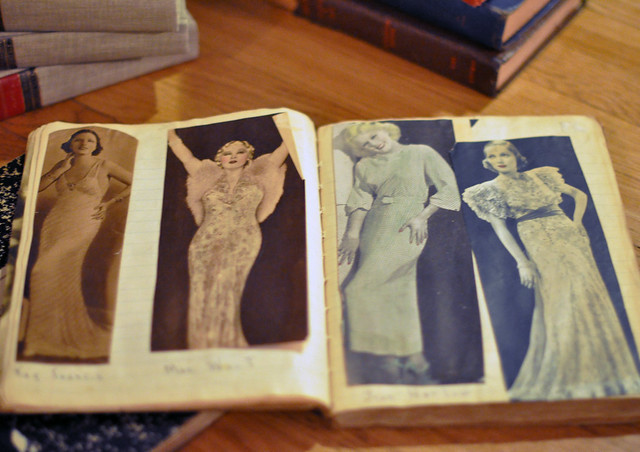 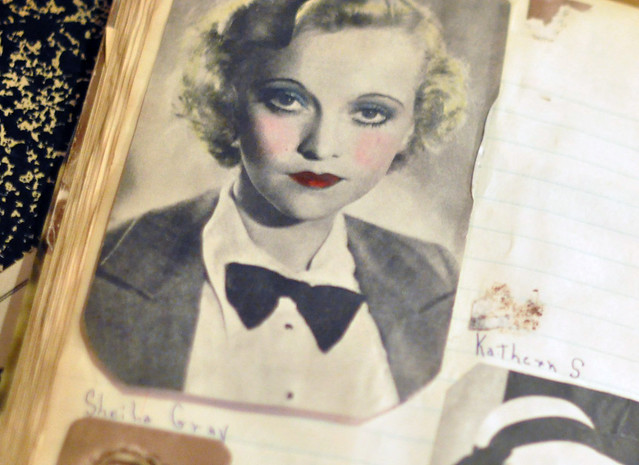 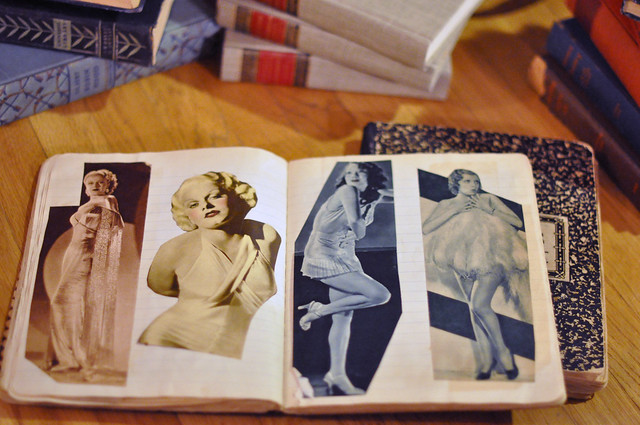 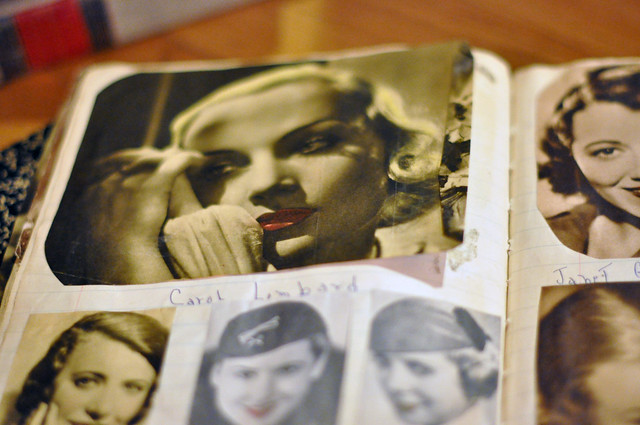 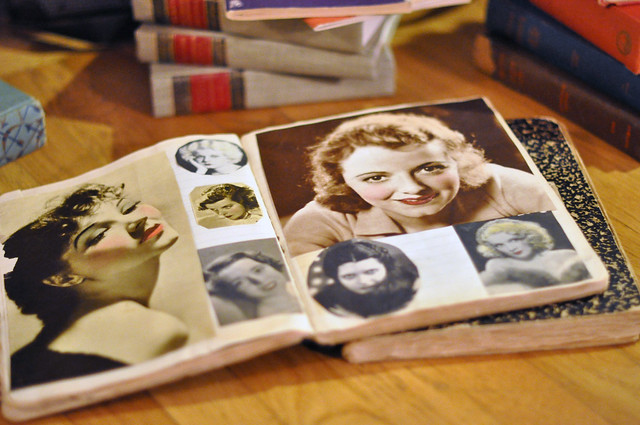 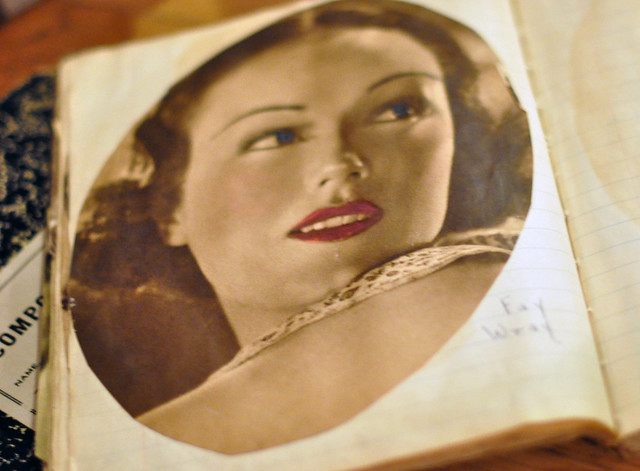 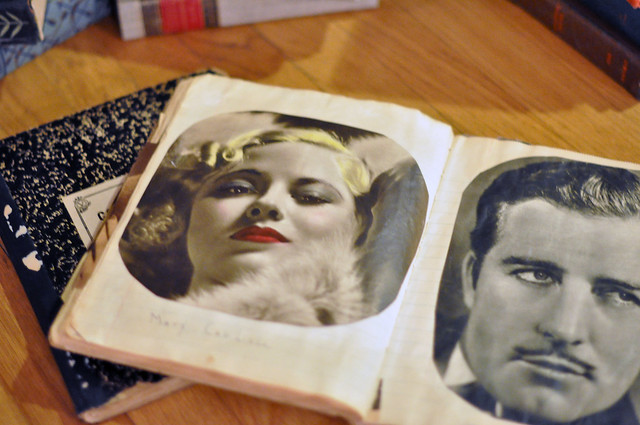 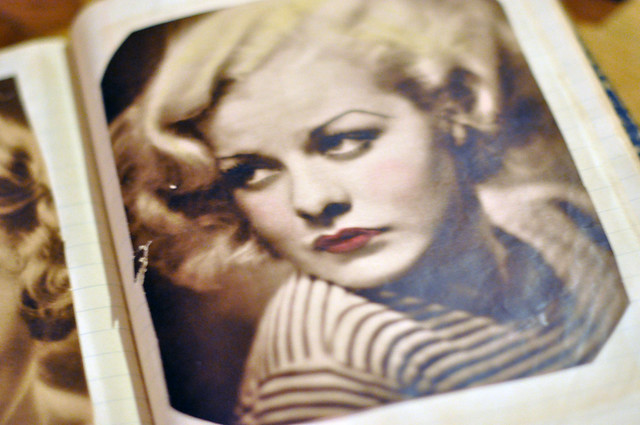 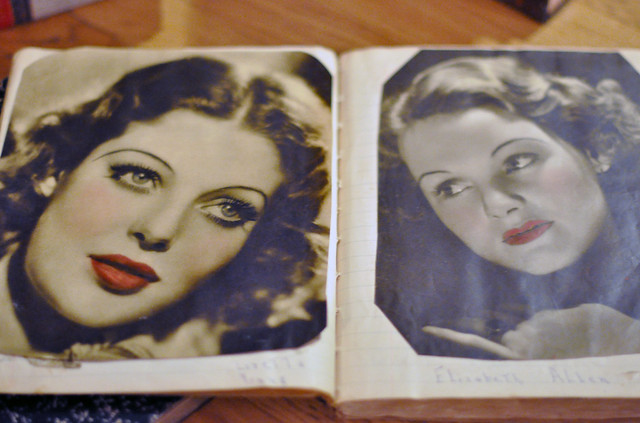 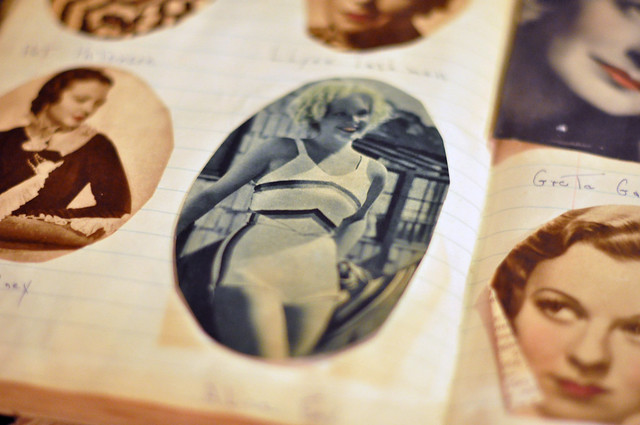 While many of the photos had a cyan, magenta, or yellow tint to them, this final shot of Fred Astaire and Ginger Rogers was the only one in full color. 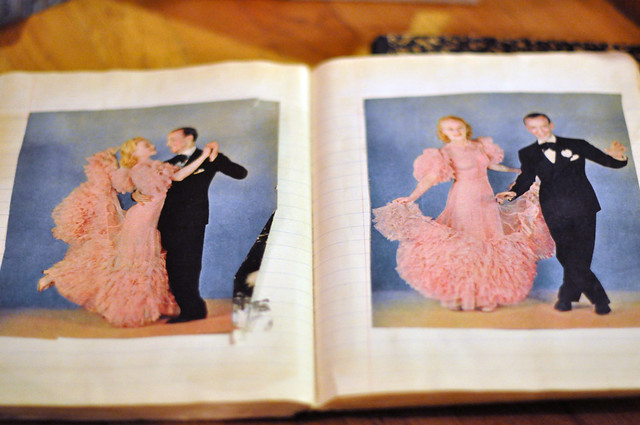 Looking through these scrapbooks, knowing my Grandma created them when she was just a girl, got me thinking about her and missing her terribly. She passed away in the early 2000’s and it seems the older I get the more I wish she were around to talk to. Her family moved from Italy to the East Coast where she remained until she met my Grandpa {from Germany} then moved to the West Coast shortly after. I think she had dreams of “Hollywood” and fame but moved out here for health reasons, or so we were told.

There are so many unanswered questions from past generations, don’t you think? They didn’t seem to be as open with or want to talk about “life” as much as we currently do now. My Grandma had a hysterectomy in her 30’s, though I’m not sure why. It could have been anything back then? She and my Grandpa adopted my mom when my mom was an infant and my uncle when he was a young boy. Now that I’m not getting pregnant, it seems we have that in common and I wish she were here to chat with about why she couldn’t have kids of her own. Obviously the husband and I have considered adoption as well, given our situation.

Being that she was 100% Italian, I wish she were here to know my husband, who is also Italian. She would love him up and he would love her food & that would make her love him even more. I seem to wear so many of her clothes and jewelry proudly but only wish I could show her …she would be so excited to know how much I appreciate it all.

I suppose she knew then though because I’d spend hours looking through her closet and jewelry drawers and reading her fashion magazines when I was a kid. And looking back, she must have known …she always pointed to her platinum and pave diamond wedding band and with a wink and a smirk would say “This is for you”. Miss you Nana 😉

When Michelle called me a few weeks ago to tell me she got us tickets for The DiscOasis I was ecstatic. Like giddy with…