I’m kind of ridiculously excited to see Steven Soderbergh’s new movie “Side Effects” after just viewing the trailer for it.

It looks interesting, suspenseful, totally thrilling, and very provocative. The moody lighting, choice actors, and sensual music, together intensify these feelings, beckoning me to go out and see it February 8th when it’s released. If I’m being completely honest though, I’m a teensy bit apprehensive to watch it, even though I want to so badly. It’s a catch-22 because I have a hint of a phobia surrounding pills -and medication in general, and just viewing the trailer stirs up that emotional anxiety. But that’s the point of suspense thrillers, right?

Jude Law makes such a perfect villain, which the trailer sort of suggests he is, though it kind of hints at all the characters being the villain, which I LOVE too. The guessing game of trying to figure out who dun it, is my favorite part. 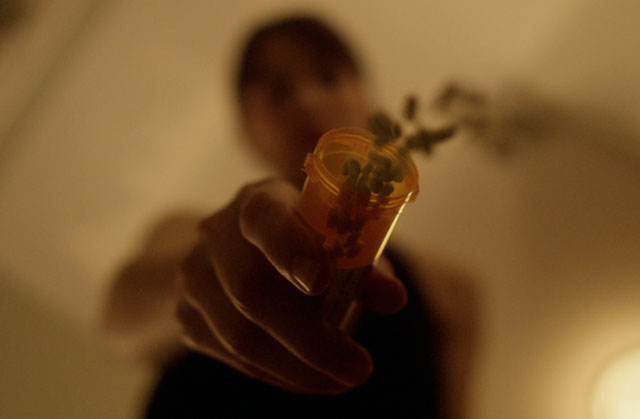 When I was in the depths of my panic and anxiety stricken years, one of my major fears {that would then cause more anxiety} was that I’d lose control and harm someone or something that I loved dearly. The trailer sort of hints that “M” murders someone without having any recollection of it. EEEEK!! So exciting in a movie, but a complete and total irrational fear of my own. Of course I know I’d never ever harm anyone, which is why these scary invasive and intrusive thoughts used to cause me so much anxiety. But what if the medication so many are prescribed for anxiety caused these sort of side effects? In today’s world, it’s a relatable topic.

Though I think Channing Tatum is much better and more likable in comedies, I’m actually interested to see how he plays this character, especially since I’m not quite sure what category his character falls into. The same goes for Rooney Mara… she’s so intense and direct usually, which I feel here as well, but this character has a softer side I haven’t really seen her play yet. It’s also nice to see Catherine Zeta-Jones again and playing a smaller roll than we’re used to.

When all is said and done, even though I have completely conflicting and also terrifyingly anxious feelings about watching this movie, I actually can’t wait to see it. I think it’s going to be really really good.

Why are you excited to see Side Effects?

Let me know in the comments and you could win a trip for two to New York City (airfare from the continental United States), a hotel for two nights and a $50 movie pass!

You may receive (2) total entries by selecting from the following entry methods:

c: Blog about this promotion, including a disclosure that you are receiving a sweepstakes entry in exchange for writing the blog post, and leave the URL to that post in a comment on this post
d: For those with no Twitter or blog, read the official rules to learn about an alternate form of entry.

This giveaway is open to US Residents age 18 or older. Winners will be selected via random draw, and will be notified by e-mail. You have 72 hours to get back to me, otherwise a new winner will be selected.

The Official Rules are available here.

Be sure to visit the sponsor’s brand page on BlogHer.com where you can read other bloggersí reviews and find more chances to win!

* Recipe by guest contributor Laney Schwartz, creator of Life is But a Dish It’s February!! Which gives me 14 well, 10 days to…