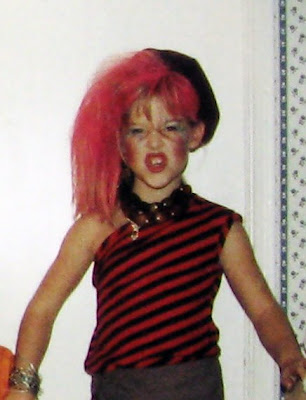 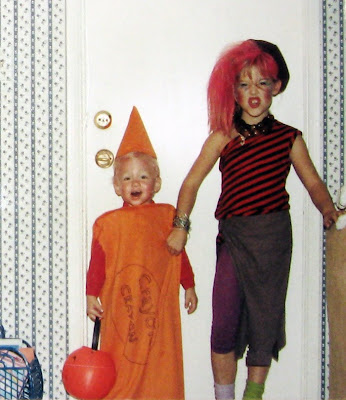 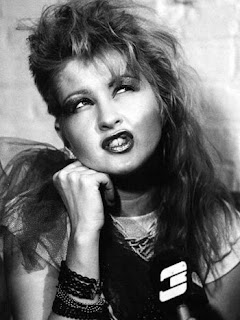 If you are confused about the faces I was making, it was this {left} that I was going for …but not quite achieving. lol

This was another one of my favorite costumes. It was 1984 so I must have been 8 years old and my brother {the orange crayon} was two. He wouldn’t stay for the photo which is why I am grabbing him. I may have been trying to make him laugh as well because he would never smile for pictures. 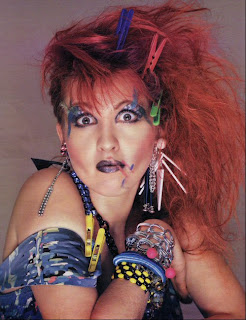 My mom brushed all my hair to one side and bobby pinned it down so it looked like it was shaved on the other side. Then she used hair color spray to get it that pink/red color.

The striped one-shoulder shirt was hers from the 70’s and I actually still have it {wore it here}. She made the easy elastic waist skirt out of some random brown fabric and I think I had two different color leggings on as well as mismatched socks.

Where my costume sort of fell apart was at the shoes …they looked the part but were made by stapling two thin pieces of cardboard together {soles} and stapled the laces to them. The staples faced down so I wouldn’t cut up my feet or slip but the problem was that in school, we had that indoor/outdoor carpet in the classrooms and the staples kept getting stuck on the carpet. I would literally try to take a step and be stuck to the floor. It was hilarious to say the least. 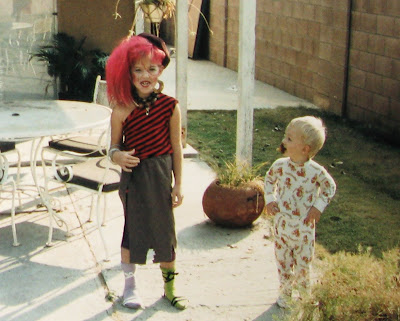 My brother kills me in this photo! Just makes me smile so big.
I think he still looks at me the same way
…like he’s just not sure what the hell I am doing.

A few nights ago while I was flipping through one of my TV apps, an old black and white movie called The Shop Around…