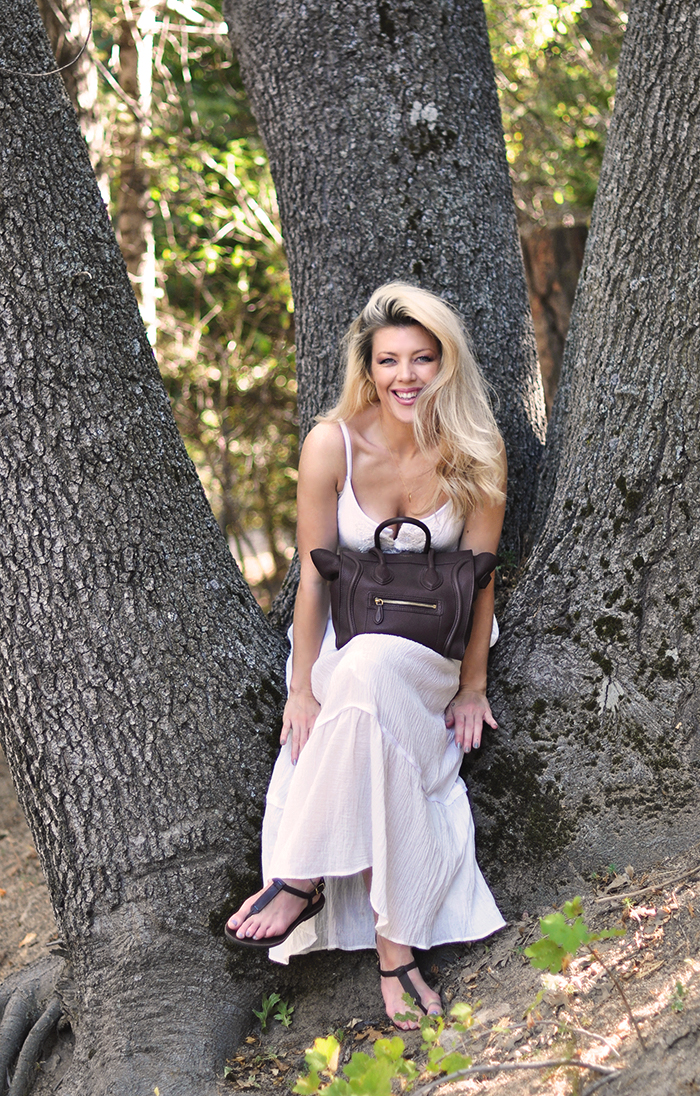 * White maxi dress by Isabel Lu … see me wearing it here back in September 2011 – but I’m thinking I need this pretty lace maxi dress in like every color
* Vintage studded skinny belt
* Gold initial pendant necklace from Tiffany … lots of options here
* Flat sandals by Sseko – you can design your own!
* Medium Celine luggage bag in chocolate via Bag Borrow or Steal buy section -years ago

* Title: Peter Cetera and Cher ‘After All’… When love is truly right, it lives from year to year… It changes as it goes and on the way it grows… But it never disappears 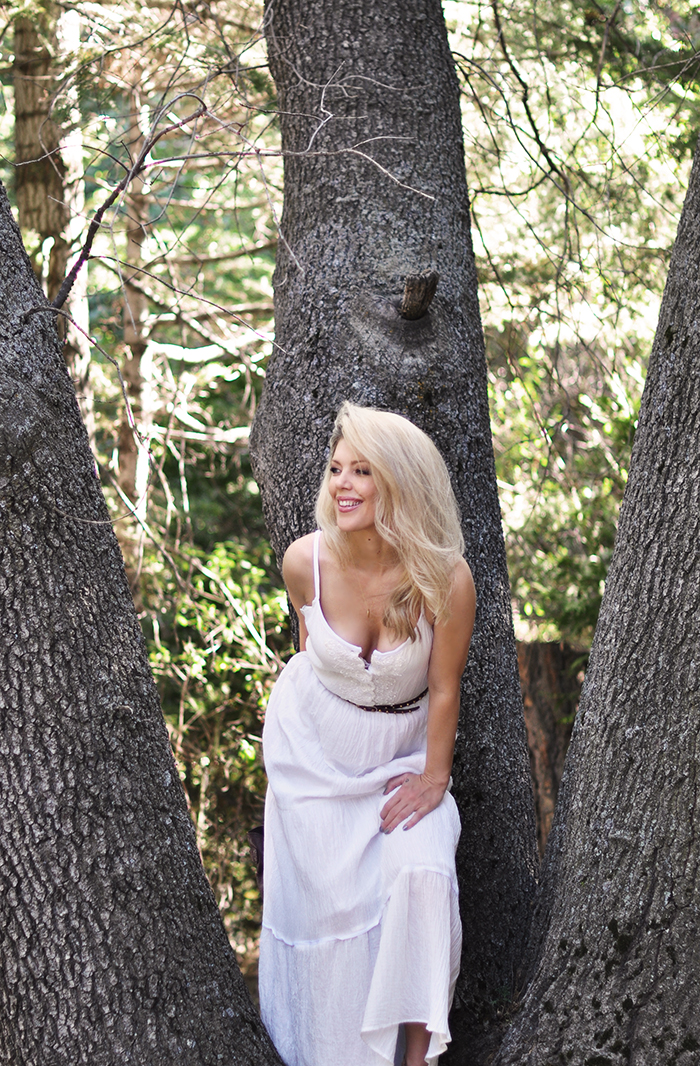 I’m obsessed with movies about life and death, resurrection and afterlife -but in some type of pop-culture-hollywood-quasi-buddhist-rendition: Meet Joe Black, Chances Are, Heart and Souls, Field of Dreams, are just a few movies I’ve seen a billion times each and that if are on, I will watch ( it’s also true that I have a few of them saved on my DVR -just saying ). They’re not particularly morbid movies, in fact, they’re rather light in mood mostly, though they all theme around death in some way or another.

Why, I wonder… What is the hidden theme I’m not paying attention to? Is it the life and death part or is it something else entirely? Maybe it’s simply the human connection and serendipity rather, this allowing life to unfold by following clues and signs, like listening to a voice that says If you build it, they will come? in Field of Dreams, or one that says “yes” in Meet Joe Black that inspires these characters to make important life choices.

Is it more the life part of the movies I’m interested in than the death part? Or is it just the damn love story that gets me? But really, they’re all about setting something right. Making a wrong that happened in the past to a right in the present… except for Meet Joe Black, because it’s more of death coming to life to view all that he’s missing from life, and mostly, what he’s missing, and longing to experience – is love. And then I think maybe it is just about the L O V E?

So I quit smoking cigarettes again. I say again because I told you I quit back in January… and I did, but then I started again – and that part I didn’t tell you. I wasn’t trying to hide it necessarily ( though I did feel like a hypocrite ), but if you follow my social media, you may have caught me a few times with said cig in between my fingers.

But alas, this time it’s the real deal. I’m done for good. again. I smoked for about one year and one month after quitting for ten years and I always wondered why on earth anyone would start smoking again after quitting for so long, KNOWING how hard it is to quit. And the answer is: DIVORCE. …divorce is certainly more difficult to get through than quitting cigarettes.

I probably stated that in my last “I quit smoking hurray for me” post, but it’s the truth. Divorce is certainly hard. Like death and taxes. But it’s true. Along with shattered dreams.

It’s been just over three weeks now that I smoked my last breath of disgusting toxins that somehow make everything better when you’re addicted… BUT. I’m in the clear now. Though I know, like I knew before, that if I have just one, I’ll be a full-time smoker again. That’s how it is with cigarettes and me, it’s unavoidable. The only way to avoid the addiction is to not smoke even one, ever again. And so I won’t. Because being a non-smoker is far better than being a smoker. It really is. Even if I hate it… it’s a love/hate relationship with life and death is really what it is. And maybe that’s what draws me to those movies?

Although my cravings are gone ( until an overly stressful event arises, like my washing machine overflowing, soaking my entire mud room late Saturday night -but I resisted the urge without even throwing a tantrum ) I have a very low tolerance for bullshit now. I really do. I realized just how much smoking raised my level for tolerating BS, almost pushing a sort of reset button on not giving a shit about certain things… which is actually quite great, but in the long run I realized that it also made me give less shits about a lot of things, about more important things, about things that matter to me, about things I actually want to give a shit about – like my work, like my life, like my health, you know, those things. I suppose like any drug, it lowers your motivation, becomes an easy excuse for boredom, and allows you to be okay with not living up to your potential… something I actually loathe and have probably stated a million times before.

You would’t think that cigarettes might have the same affect as say, far more severe drugs, but for me, and probably for others, subconsciously, this lack of focus, lack of motivation, lack of self discipline, is a choice and it’s a poor one and it keeps us from living a life we truly love, a life we truly thrive in, and a life we deserve to have.

Maybe I’m too hard on myself. But, in my opinion, I didn’t get much done in the last year that I have been a smoker. I did, however, cope with my divorce and my all the alone time that it created, and made everything “okay” and I dealt with it. I handled it in the way I knew how. But I’m not that person anymore. By the time I post this, I won’t even be the same person who wrote this, because each new experience changes us, even if the change is ever so slight, we are different than we were yesterday.

And so, here I am, again, living in the moment, for the moment, as I am. I feel better, and though my emotions are still brimming at the edge of my body and soul, at least I feel like I’m making better choices again and moving forward and maybe finally able to actually deal with what happened last year and really move on.

Speaking of moving on. I have to sell my house. Or I don’t. I have a choice. But as quickly as I usually am at making decisions, this one is very difficult for a billion reasons.

I find myself still getting involved in daydreams about my future – a future that probably still involves this house – a house filled with children and a family – a future that doesn’t exist ( unless I think about Under the Tuscan Sun ), setting up expectations of a life that doesn’t exist, the same way I did in the past with this house and my husband and I wonder if I will ever stop this nonsense or if it’s just human nature to do so.

It’s entirely possible though, that I am insane. So there’s that too.

But I find it very difficult not to and as soon as I think I’m not, I’m smack in the middle of planning a life that is not mine, and this life plan always involves children, and this life does not exist. I tried it in my past. I do not know why on earth my psyche cannot resist doing this. Is it the ego trying to fill a void or is it the longing for something I always wanted and still want to actually come true and to continue planning for a life that isn’t real, one that doesn’t exist, filled with people who do not exist, is it some kind of defense mechanism? Some kind of way I’m coping with the fact that I still yearn for a family and I have yet to manifest one.

There’s a big part of me that knows I might just need to be alone. That knows that to get to where I want to be i have to be brave and brave it alone. I was too afraid to last year. That’s where cigarettes came in. They were my companion. But I’m stronger now. And as much as I don’t want to be alone. As much as I want my house to be filled with a family, the only real way to move forward may be to sell this house, along with the dream, and move. It may be the only way to move forward.

But I don’t want to. I’m digging my heels in. More than any potential I can live up to. More than any career dream I’ve ever had, the dream to be a mom and have a family still outweighs all the others. It’s just the only dream I don’t know how to make come true. 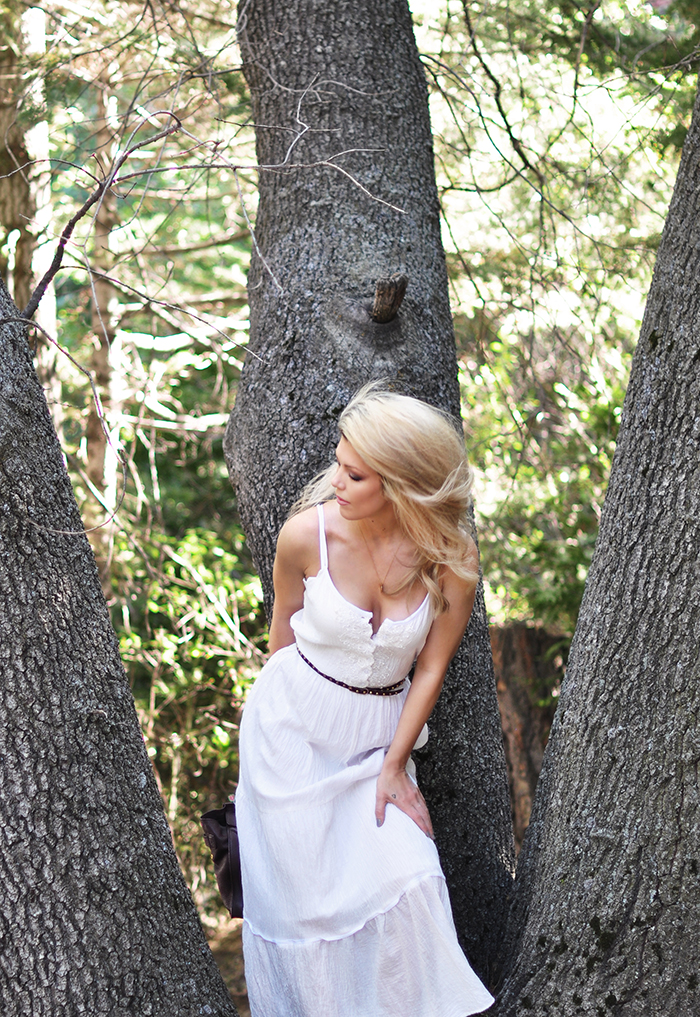 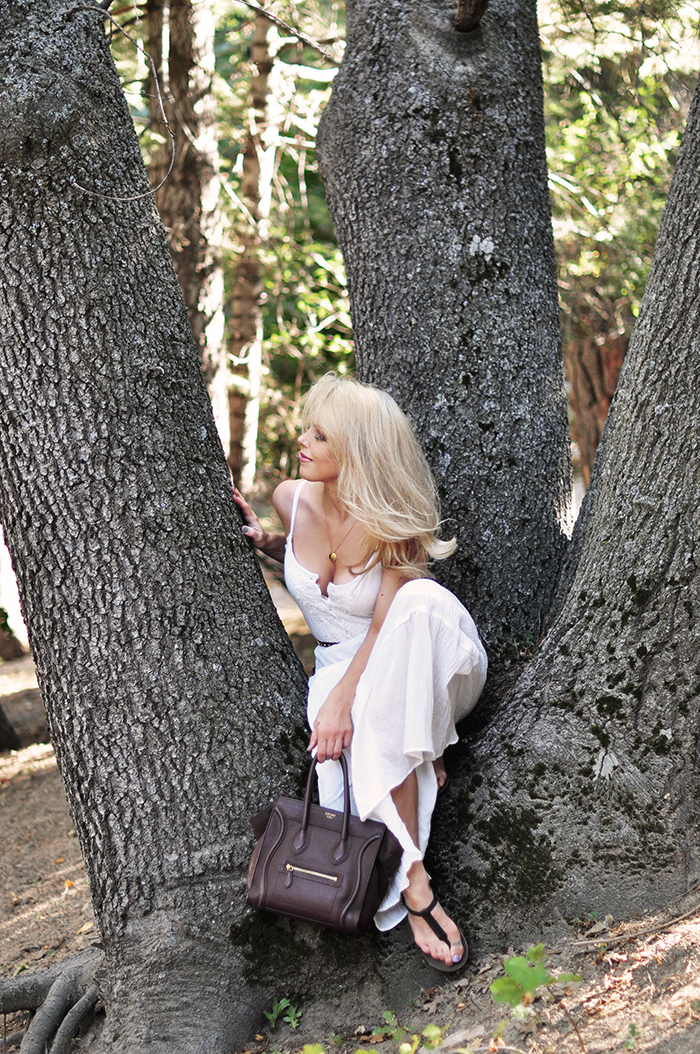 In or around 2008 when I had more free time and could read every single blog I came across on the internet, I found…