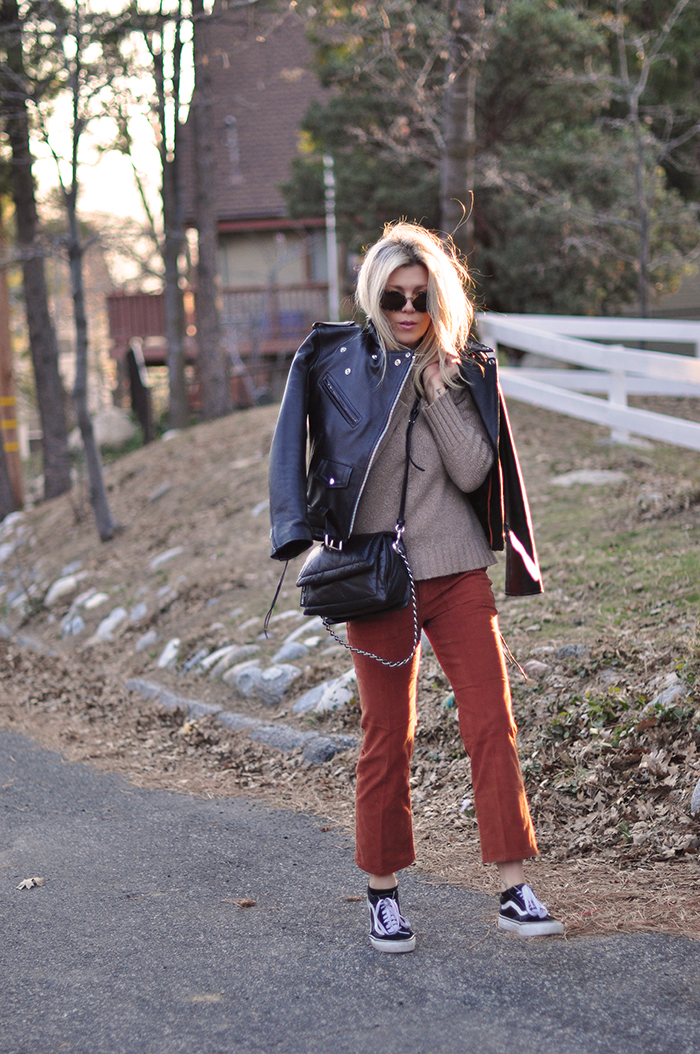 * Old taupe sweater… which I realized I’ve worn a hole in one of the elbows because I wear it so much. Just recently wore it here
* NEW rust corduroy pants, which I love. They’re Joe’s Jeans and they were(still are) a final sale at Shopbop for $56 and I took the risk and won because I love them. They’re super comfy with a little stretch, and I love the retro style. They’re true to size and fit is pretty flattering I think.
* Biker jacket (from Wilson’s)… always a classic fave – also seen here with a slip dress & sweater and here with jeans & a bodysuit. I love that it’s a bit oversized and really heavy (mine also came with a zip/out lining so it’s actually warm in the winter) – Asos has a cute one with moto detailing (that’s lighter in weight than mine) for $114 and an oversized look Faux leather biker jacket for $51
* The Marc Jacobs bag – I added the longer strap and love it even more.
* Old Skool Vans
* Philip Lim sunglasses (from a few years ago)

* Title: FINNEAS – Shelter…They call us lucky, but I think we might be cursed… I could drink the river dry, and still die of thirst

Finneas is the other half of the Billie Eilish sound… he’s her brother and I just realized he has a ton of great songs he released last year as a solo artist and this is one of them. Sometimes his voice gives me John Legend feels and other times it’s a newer alternative rock vibe that I can’t quite place… and then there are quiet songs similar to Billie’s. It’s interesting kind of like soft pop, alternative-ish, if I had to try and label it and well, it’s good 🙂 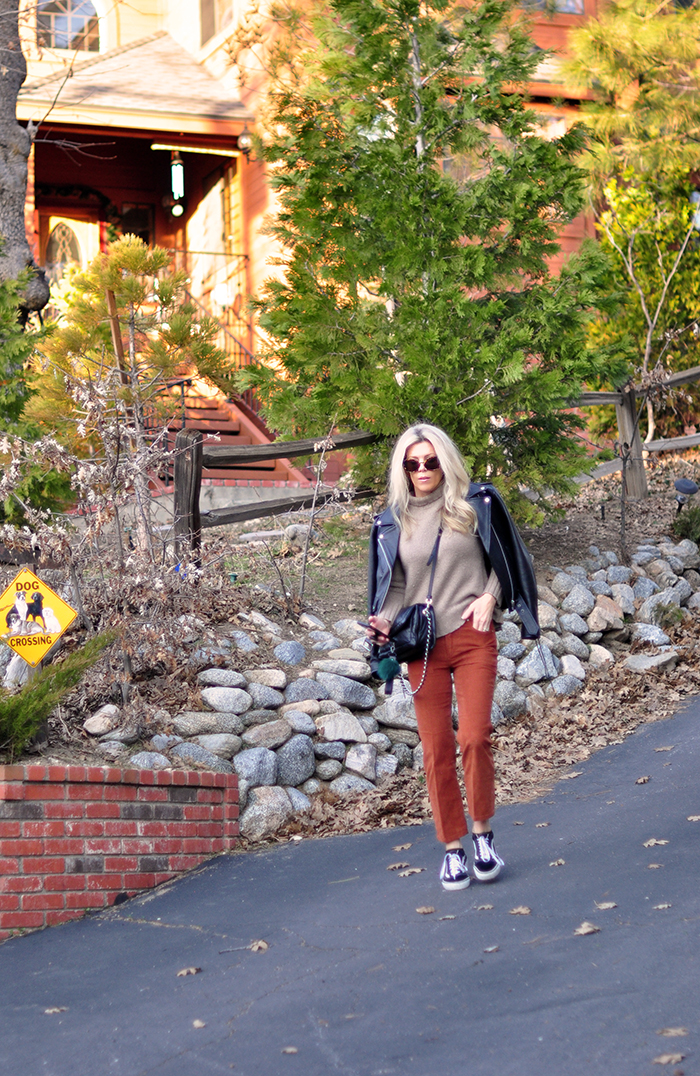 I threw this on last Sunday and headed to Dogwood to watch the Super Bowl (which somehow feels like it was a month ago instead of a week)… but not without stopping by my mom’s first for a quickie photoshoot first. We caught the perfect sun-glare at golden hour and everything feels super FALL… not only the colors of my outfit but also the amount of fall leaves on the ground which honestly weren’t even noticeable in reality. Most of the snow has melted just in time for a fresh snow that’s on its way. As much as I love winter though, I’m ready for spring.

I think the Vans gave it a casual, almost retro look… whereas a heeled boot would have dressed the whole look up a bit. 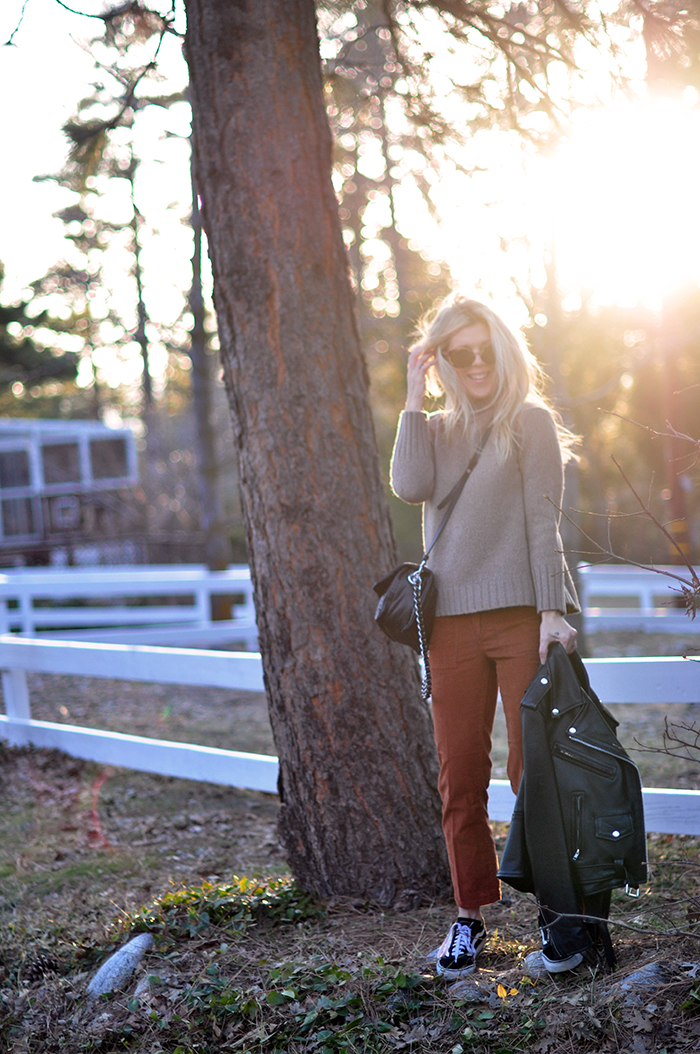 Late Friday night, or shall I say early Saturday morning, I discovered that Trevor (one of my Franchies, for those of you who may not know) had a bit of an issue in the testicular area. To put it bluntly, his balls had swollen to more than twice the normal size and were as red as a strawberry. In fact, when he sat a certain way, it looked like there was an actual strawberry sitting between his legs. It was not good.

In retrospect, I realized that he had been licking in that area more than usual but the swelling hadn’t happened until that night. I started to worry but didn’t think it was life-threatening so I gave him a little anti-inflammatory medicine he had left over from his back surgery and watched him carefully. Of course, Saturday morning, there was no change in his condition so we left for the vet at 9am.

After a quick diagnosis from the local vet (that they’ve been going to since they were puppies) we were told they weren’t exactly sure what was going on but since his “area” was cold to the touch, they worried that something within could have been cutting off circulation and we should probably rush down to the emergency California Vet Specialist in Ontario because they may need to neuter him or else the testicle could die inside of him and it could be life-threatening. Of course I panicked.

Now, I am quite familiar with this vet (CVS in Ontario -specifically) because it’s where Trevor has had both of his back surgeries (2016 & 2018) and Randy has even visited them for a neck tremor. They’re pretty great there (actually, amazing), however, I follow a woman on Instagram whose Frenchie baby lost its life during a procedure at a different California Vet Specialist and since then I can’t help but worry… and any time Frenchie’s have to go under anesthetic and/or surgery, it’s a huge risk for them (which is why I have never opted to neuter them).

But I really had no other choice.

So I picked up my mom (because Trevor really hates the windy mountain roads and gets super nervous in the car AND well, I get really nervous and anxious when it comes to the health of my Bobes and so we both needed her support. Luckily she’s always willing to literally stop whatever she’s doing and come to the rescue – THANK GOD FOR MY MOM)… and we raced down the mountain to Ontario, which is about an hour away.

We arrived there just about noon and Trevor was admitted pretty quickly. They too were worried about the temperature of his scrotum (lol) and we were told he needed an ultrasound to see if they could find anything going on inside him because an ex-ray would really not show us anything at all. Mom and I headed to the diner across the way for lunch and tried to forget about the nerves and worse-case scenario monkey mind that is a challenge to fight. 45 minutes later we were called back when they told us that they found a mass in his sack (also, lol) and an enlarged prostate and they had to do more blood tests to prick different areas and pull cells out to see if there were tumors in about 4 different places.

At this point, I was just holding back tears. As soon as I heard tumors and cancer and chemotherapy I almost lost it… but I held it together, surprisingly. They took him back for the rest of the tests and we were told it would only be 45minutes to an hour before he was done. This was around 2pm I think.

We waited and waited and WAITED AND WAITED… we kept ourselves pretty preoccupied because well, my mom and I can talk and laugh for hours, especially when we’re trying to distract ourselves from the possible thought of worry and pain but by 5:15 we were beyond antsy. They told us everything was fine and my guess was that they were waiting for Trevor’s sedation to wear off before sending him home, but it was hard to keep my mind positive.

Finally around 6pm they brought Trevor out and with a ginormous cone around his head, he could barely walk without bumping into everything. I paid the $2100 fee (yes. two thousand one hundred and four dollars and fifty five cents, to be exact) and had no real news. In fact, we won’t know anything until all the tests come back Monday or Tuesday… or probably Wednesday, but I really hope it’s not that long. That is when we will determine what is actually wrong and how to move forward. Obviously I’m hoping it’s nothing at all but also, it’s obviously something and I can’t help but worry.

We were the last to leave the vet after being there for 6 hours and no real procedure done, only tests. Trevor, as usual, was bid a fabulous farewell by every employee and vet in the main room. I think honestly, they just kept him back there for 6 hours so they could hang out with him. 😉 because he’s the sweetest. ever. 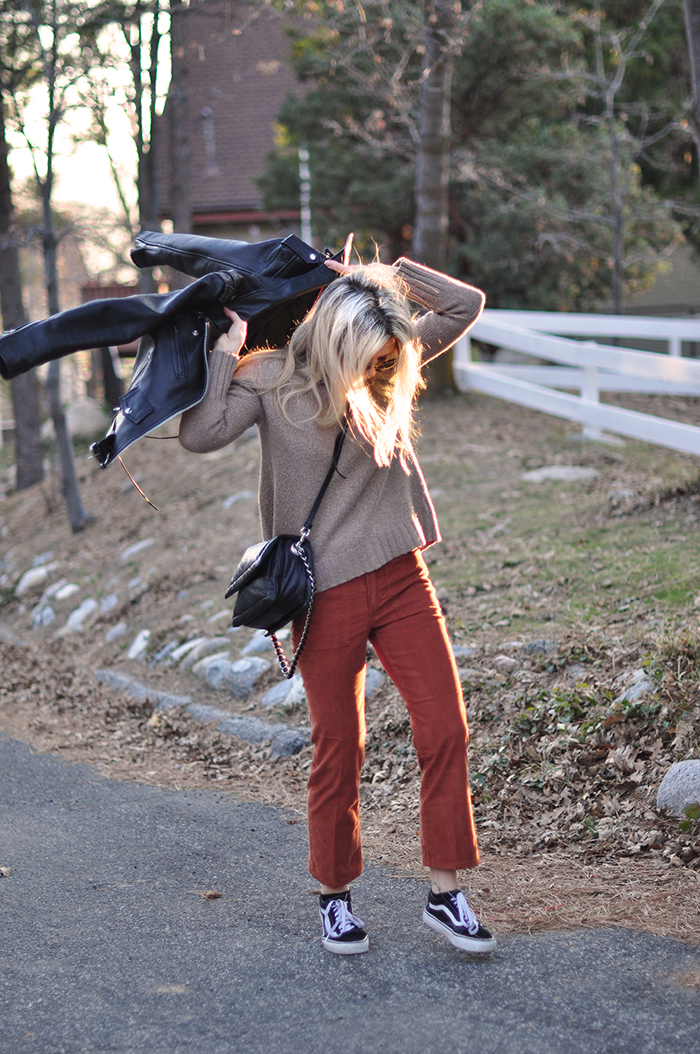 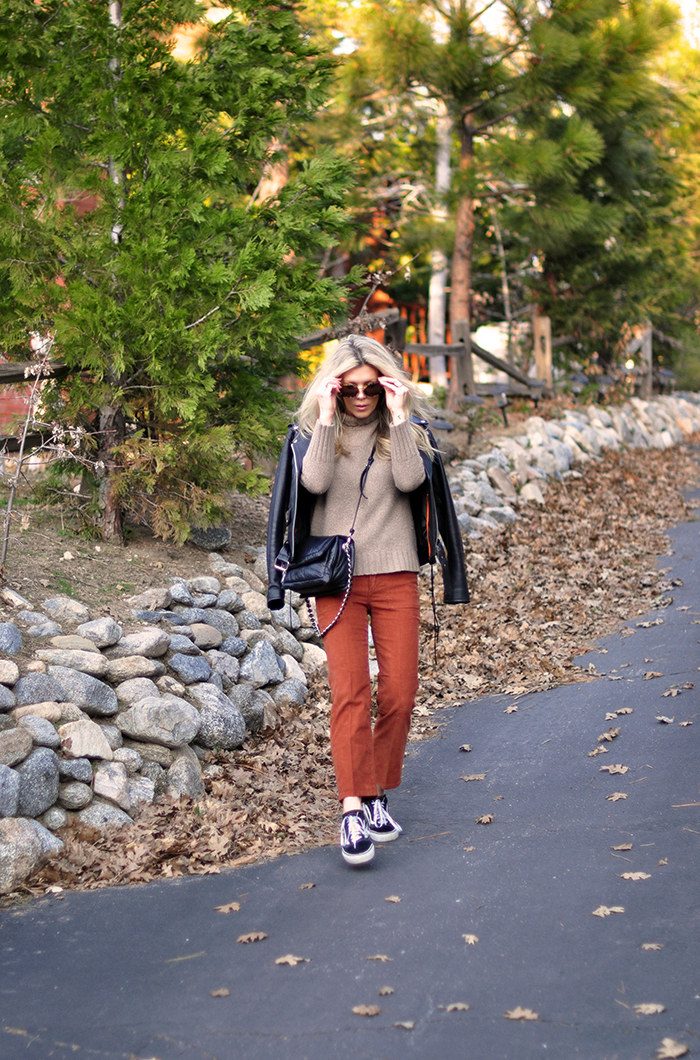 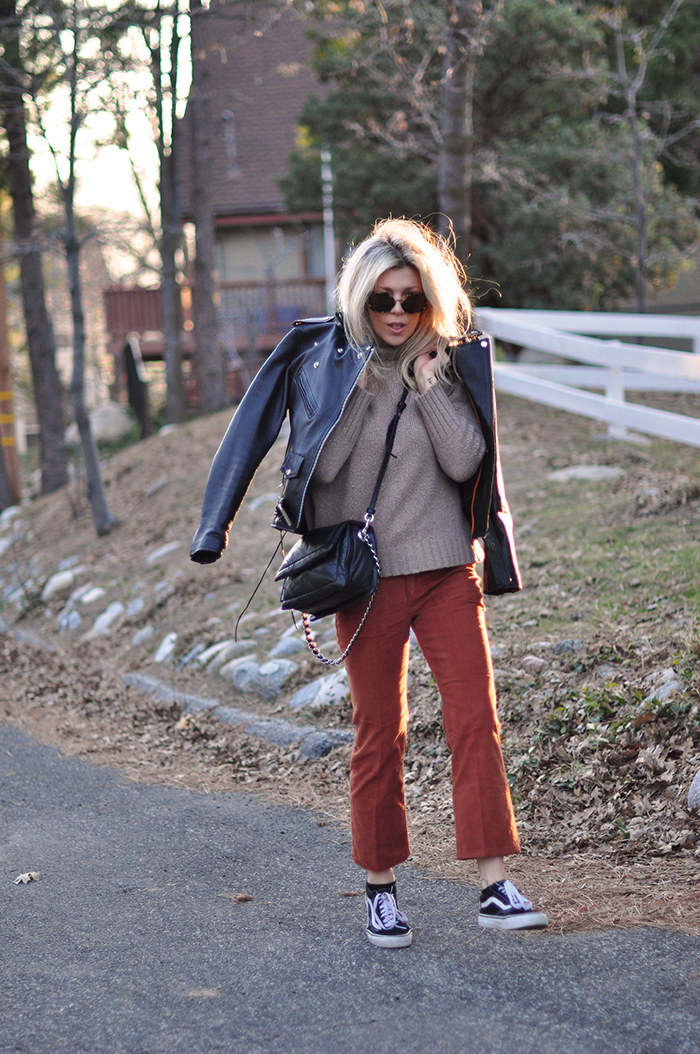 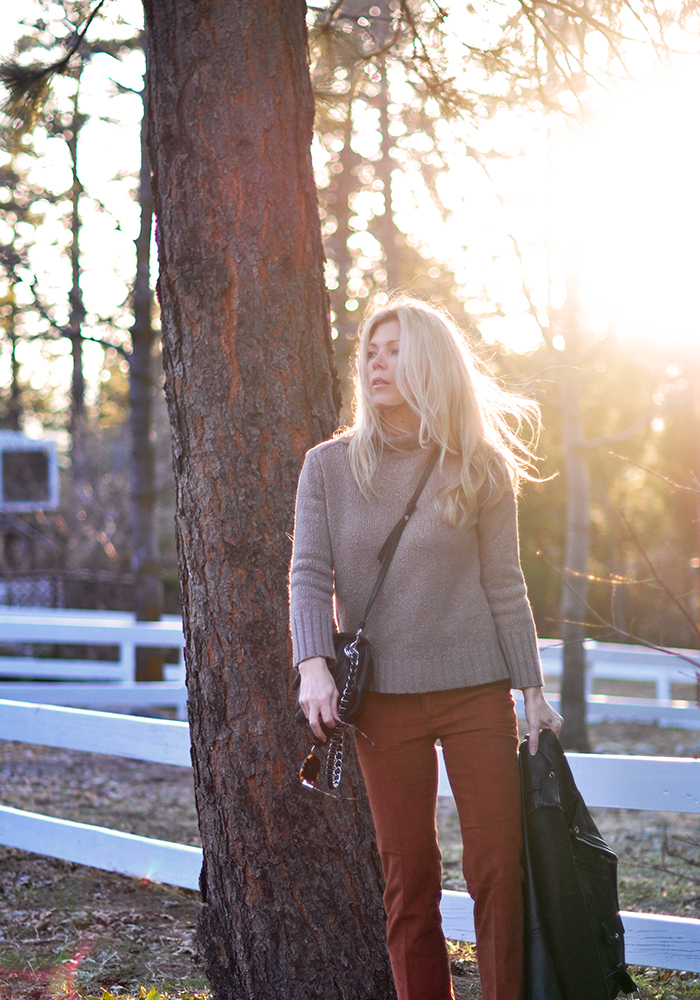 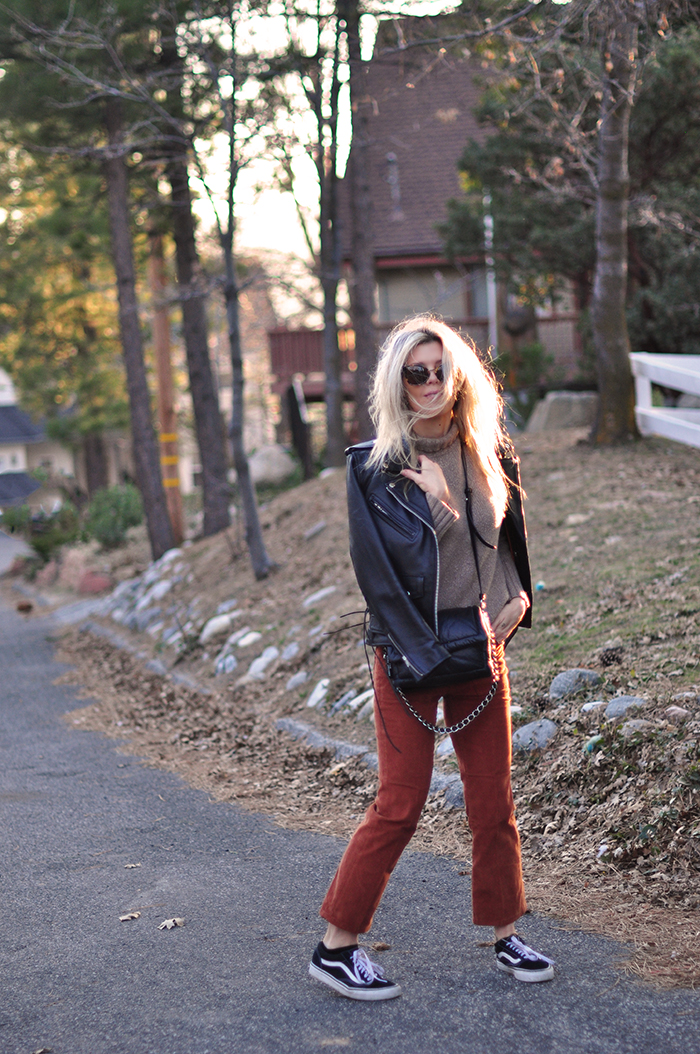 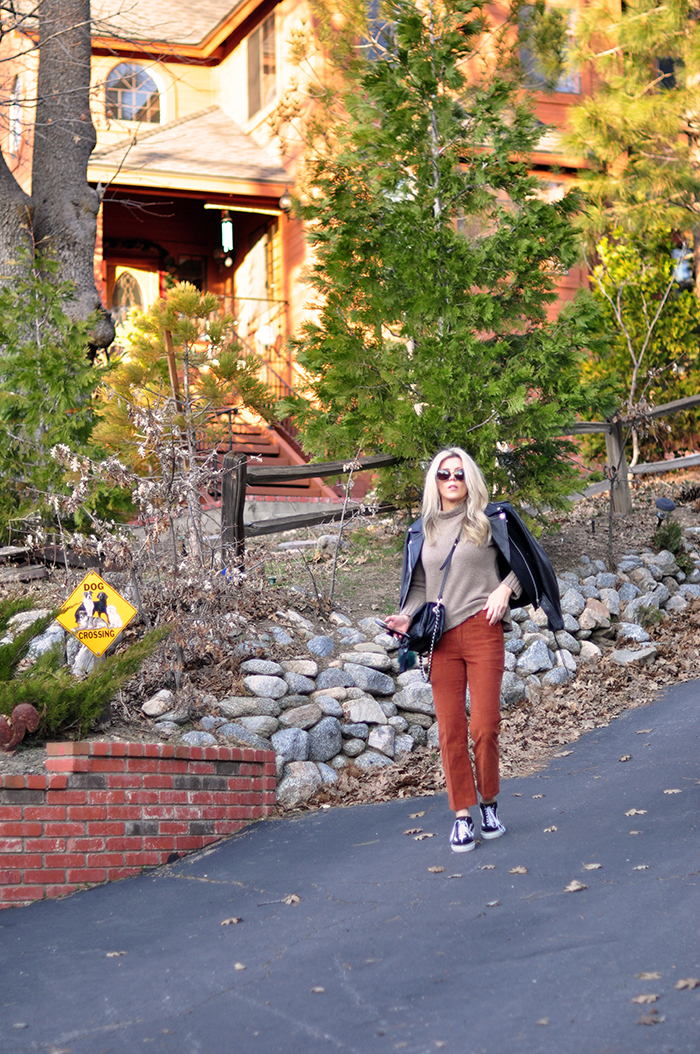 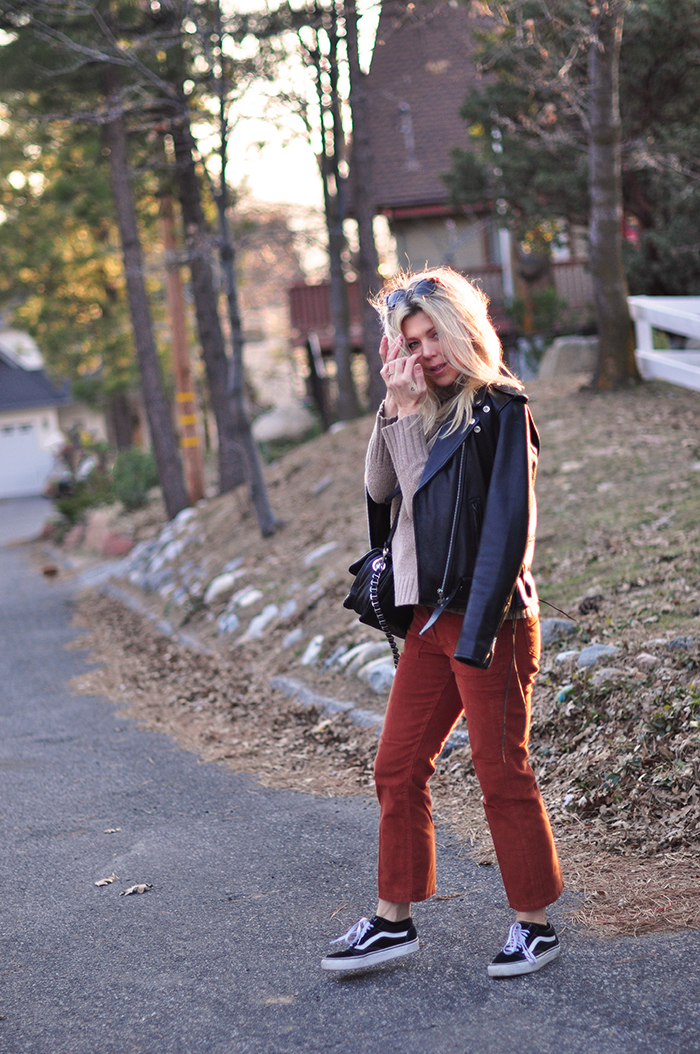 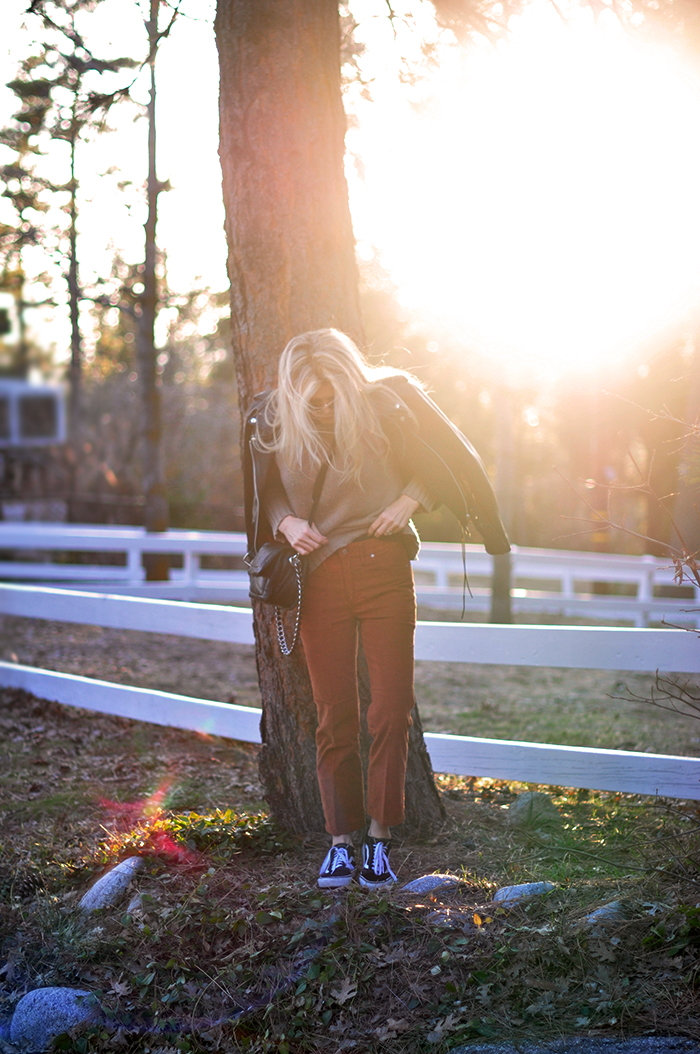 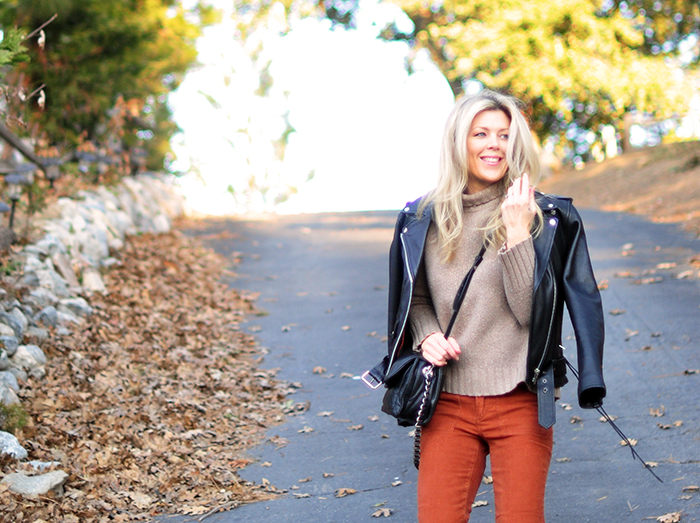 Yes… far too many photos again. I can’t edit for shit lately 😉 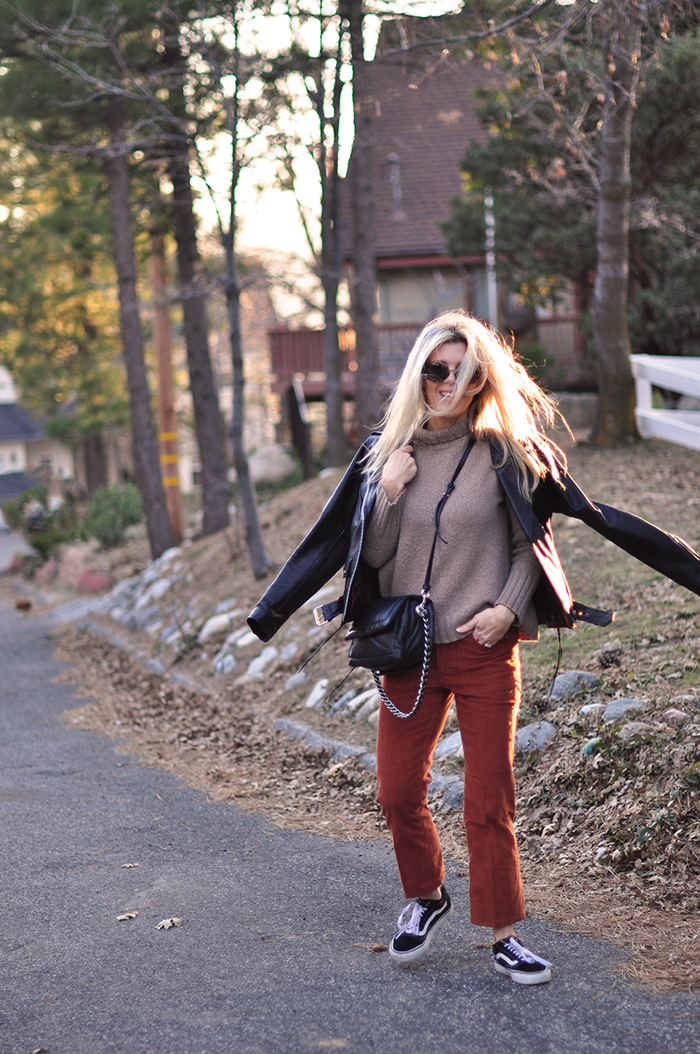 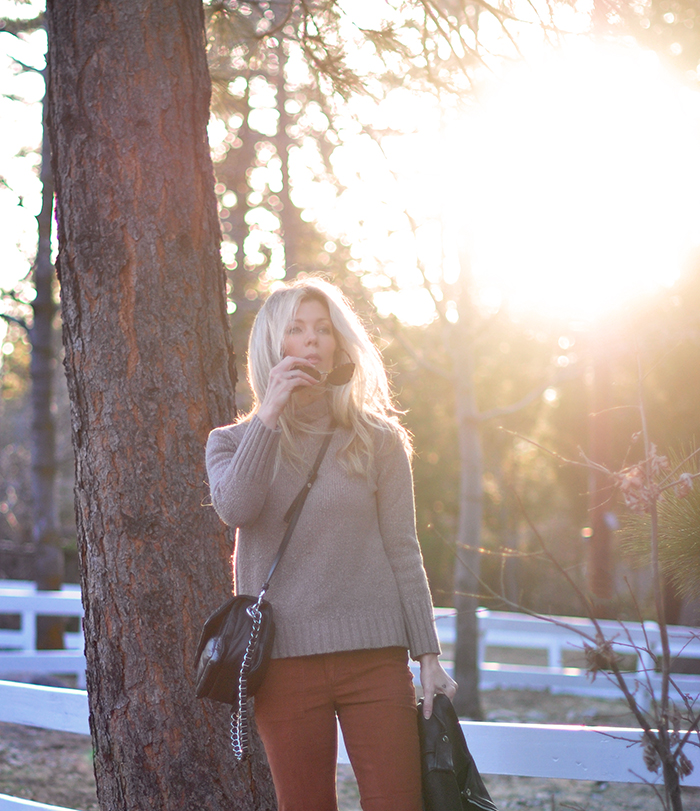 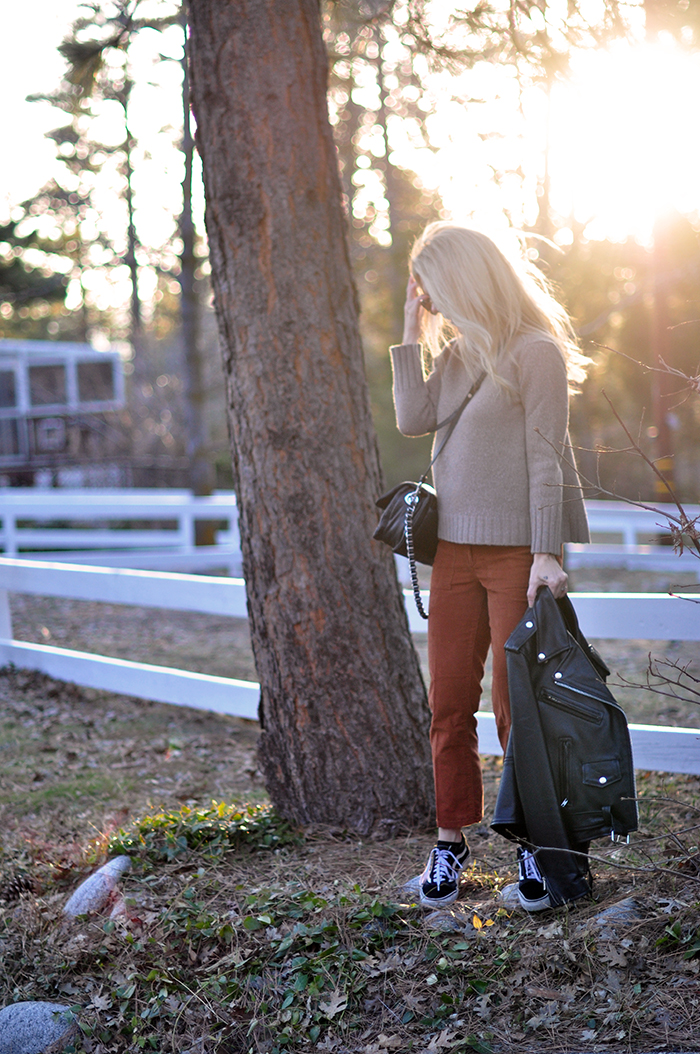 * Find all my Style Posts Here

Lilly Bunn Interiors is another designer I found via Joss & Main and fell in love with her portfolio. Some of these spaces are…