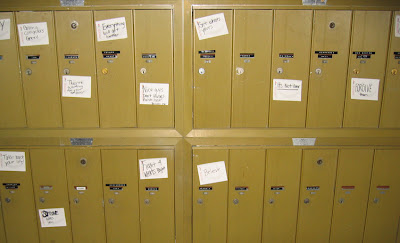 There’s something different today. Maybe it’s because it’s October. Maybe it’s me. It’s very still and quite warm and there’s something eerie in the air. It feels as if someone is watching. I keep looking over my shoulder and into the hallway from my desk in the office, expecting someone to be there. An energy is pulling my focus elsewhere.

I had a strong craving for wine today which is unusual. Not only do I drink only on occasion, my first choice is not wine. Today, it was wine, and I wanted to start drinking it at around 2pm. Of course, it wasn’t until I got home from work, grabbed my husband, returned my rental car, picked out a pumpkin, brought one over to my brother’s house, grabbed some food to go, picked up guitar hero 3 and returned home when I finally uncorked it. It was delicious.

God and religion have been the topic of choice today. My most recent thought on the entire category of god is that he is Santa Claus for adults. Many people think if they stop believing, they will not go to the mythical heaven. Like children feel when they learn that St. Nick is not real; they fear they will not get presents. It’s a bit of a sad realization, as it was when I learned about Santa, but it also symbolizes a growing period.

After a long night of wine, getting kell to laugh on the phone, and rocking hard to guitar hero 3 (which may I say has some awesome new songs), I took the dogs out for their last walk, a chore usually left to my husband, and found the mailboxes littered with post-its with hand-written messages on them. Immediately I thought it was the work of a religious group and thought it was a sign that my god is st. nick theory was right. but then I saw Believe… on the box next to ours, which had nothing…and maybe that was a sign. But it just seems so ridiculous. 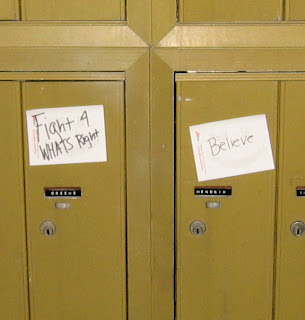