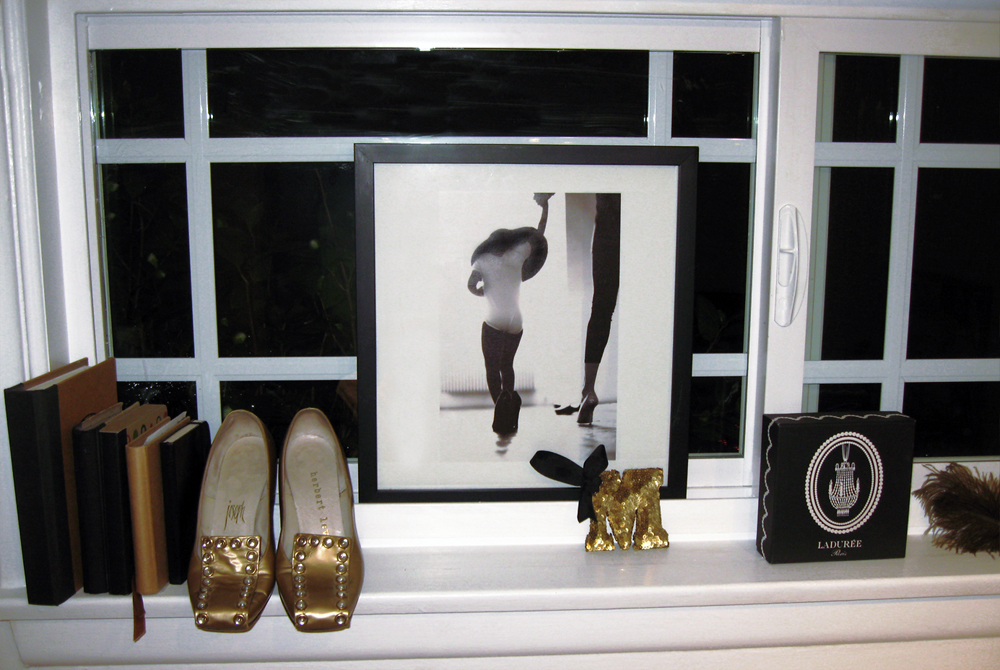 As I slowly work at pulling my new office/dressing room/closet area together – which I am just going to refer to as “my studio” from here on out {and I don’t care if it sounds pretentious because I just cannot say SLASH one more time}, I’ve realized now may be the time to go through the back issues of magazines I hoard and only save the relevant ones. But who am I kidding, they are all relevant!

Filing Vogue with Vogues, Elle Decor with the like, Surface, Wallpaper, Dwell, Bazaar …etc, etc, etc, I came across a Glamour magazine from September 2006 and placed it in the “toss” pile because {and I’m not sure why but} I’m not a huge fan of Glamour. Now, let me just say that “toss” actually doesn’t mean “throw away” until I’ve gone through it tearing out anything that may catch my eye. But since it’s not my favorite, I most likely kept this September issue because it was from the month/year that my husband and I got married. Knowing that I saved it particularly, I decided to flip through it carefully to find out why.

I always read a magazine back to front. Maybe it’s because I like the way it sits in my hands better or maybe it’s because I want to skip through all the ads and horse shit and get to the good stuff, I dunno, it’s just the way I do it. So as I began flipping through it I immediately spotted editorials dripping with every single mainstream trend that is happening right now. From big chunky bib necklaces to the dresses, plaids & velvets, leggings and tights and booties. Everything that will most likely be played out very soon if it hasn’t already in the fashion world but continue to be trendy for most of the rest of the world. However, I did spy an image of Kate Moss wearing a military jacket which are just now {if not for the last 6 months or so} making their way into designer collections and street styles galore.

By this point I had realized that this magazine was indeed a keeper because there were more things I wanted to keep than toss so I decided to take a break out into the sun and read it while catching some vitamin D.

. . . and then I flipped to an article titled “Infertile in a Baby-Crazed World
What’s it like to not be able to get pregnant in a culture filled with “bump watches,” Hummer-size strollers and haute couture maternity wear? …and my heart sank a bit. I knew I had to read it now. I knew I had to because I’m 99% positive that I skipped this article entirely the first time I read this magazine. Why? Because I wasn’t “infertile” then. Therefore, I had no interest.

It was the following year, 2007, around the same time which we began “trying” to get pregnant. And as I read the article by Lynn Harris, identifying with all but the fertility treatments {which I know in my heart I could not handle}, I finally accepted the fact that I am infertile. A word I’ve never used really to describe myself or my situation. A word that removes all hope and because of that, I hate it. But it is exactly what it is and I’m pretty sure I cannot deny the fact that I am not going to get pregnant any longer.

And here we are, almost 4 years after this article was written, still living in a baby-crazed world where baby-mania is at the top of the “trends” list. Albeit, a bit less extreme than it has been in the last few years but it continues to go on. But what happens when it’s not trendy anymore to have babies and you’re all left with annoying little brats eating up all your hard-earned cash? And when did society switch focus from empowering women to offer more than mere offspring?

I, along with all the other women who are struggling with pregnancy issues {or who simply choose to not procreate}, must endure it, day in and day out …watching all their friends get pregnant “accidentally” and trying to hold it all together and pretend like it’s fucking fun to talk about their pregnancy while feeling like a failure as a woman.

I’m at a breaking point. A point where the sadness is being drowned out by anger and annoyance and rethinking, yet again, the whole damn thing.