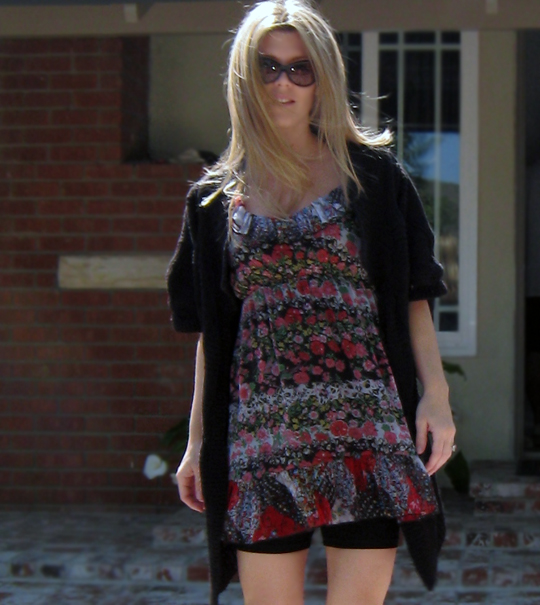 Besides reminding me of the 1986 animated movie “An American Tail

” when I think of the quote “Never Say Never” {which also ensures the song looping in my head for the remainder of the day} I’ve learned to never say never again when it comes to fashion and what I will or won’t wear.

In March I touched on the subject when I wore my newly thrifted denim button down shirt I thought I’d never see taking up space in my closet again and just recently Jennine from The Coveted said the same thing about denim on denim looks and clogs becoming staples in her current wardrobe as well.

My thinking was as so: Since leggings had made such a huge comeback {and were so comfy and versatile to wear} wouldn’t then short leggings be the next step? So I ordered my new bike shorts from American Apparel in or around 2008 {even though, I’ll just be honest here and say I probably still had/have a pair lingering around since the 90’s} …but have just started wearing them again recently.

The shot above is from last weekend; a trip to Osh for our new patio furniture. It was hot so I threw on this little dress with my favorite short sleeved cardigan …but something was missing. It was a bit of a windy day and the dress was rather short {as I usually wear it with leggings or over a bikini} so I pulled on my bike shorts to solve the “what if the wind blows up my dress exposing my butt to the world” issue and was utterly surprised at how cute they looked. They’re kind of my new favorite thing to wear …there, I said it. I love bike shorts.

I got mine from American Apparel, floral ruffle dress from Forever 21, Victoria’s Secret short sleeved cardigan, Tom Ford cat-eye sunglasses. {There are some cute ones, including lace & zipper adorned at Shopbop, Victoria’s Secret has a few different choices as well}

So my lovely ladies …What are you wearing now that you said you would never ever wear again? …or if nothing, would you wear bike shorts now under a cute dress or tunic?