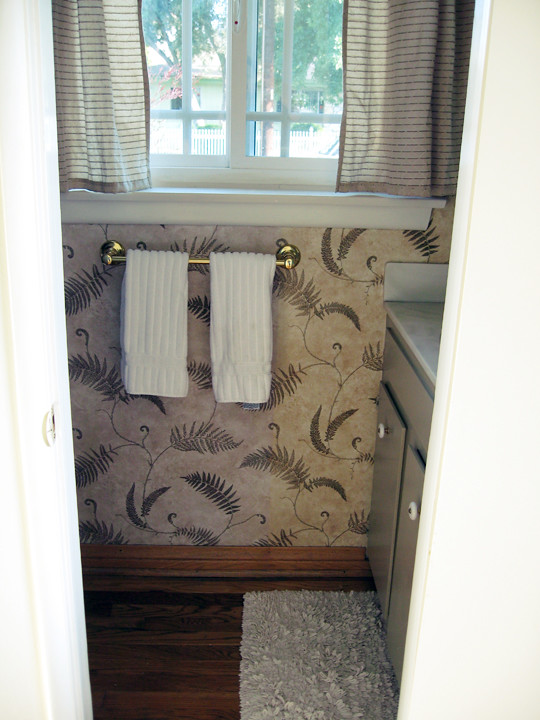 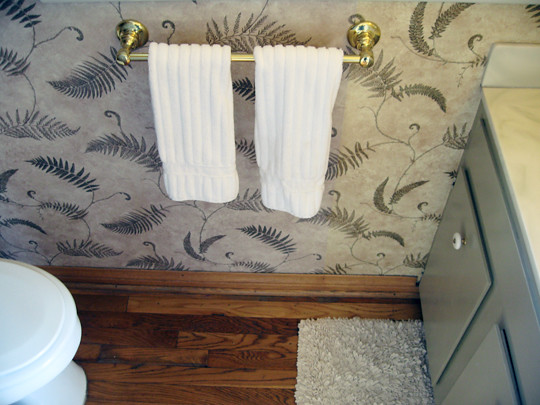 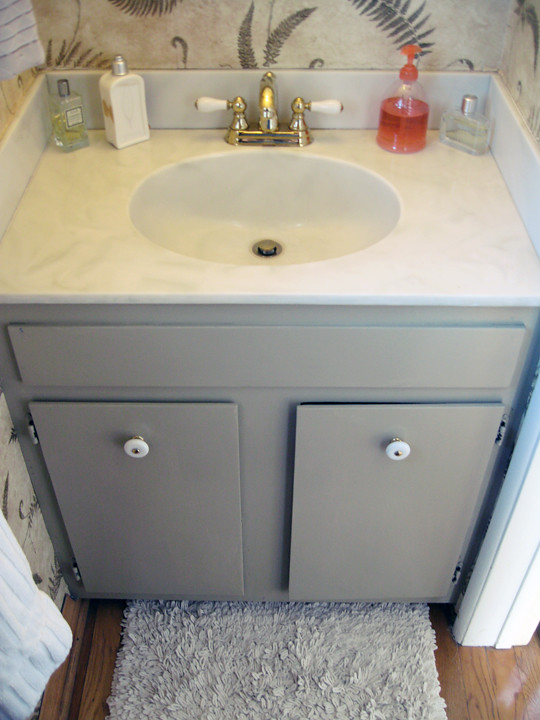 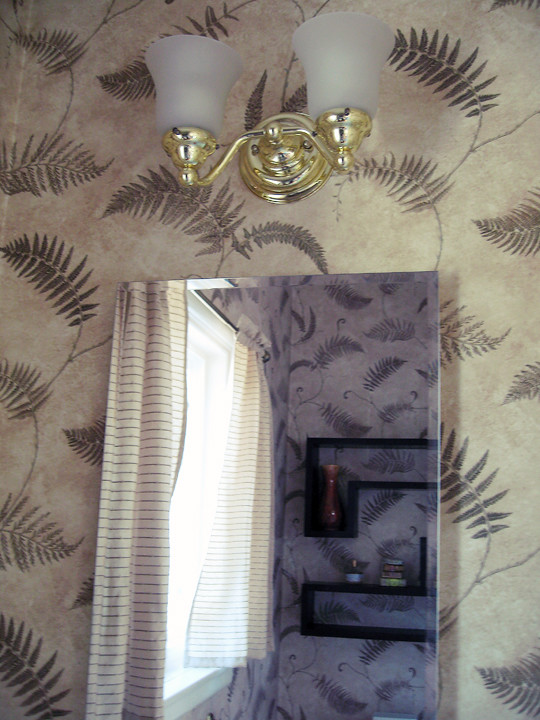 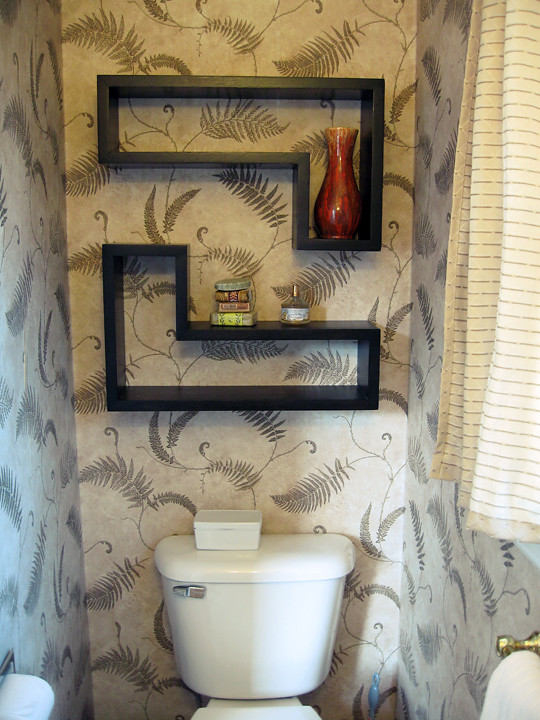 It was a blank slate when we moved in …well, other than the fern wallpaper, which if you look closely {at the top two pics}, is two different colors. As if they ran out of paper mid-project and when they went back to get more, they picked up the wrong one but didn’t realize it till after it was up on the wall & just said fuck it! You really can’t tell in person unless you look closely. But since we don’t own this rental, I think it just adds character to this otherwise unmemorable space. The verdict: I like the fern paper. It makes me laugh.

I added the simple gold curtain rod {to match the other fixtures -that I would replace if we owned}, the curtains {reversed to see stripes}, hand towels and loop rug because it needed all those things. I figured if I stayed with neutral tones, I could use them in the final decor. I hung my West Elm “L” shelves which I used as a spice rack our tiny condo kitchen, above the toilet.

{note* always buy and install a new toilet seat if you’re renting. They’re like $25 and at least you know your tush is the only one that’s been on it}.

And this is how this bathroom has looked for about 2 months now …prepped and waiting to be “decorated”. But I wasn’t sure what direction to go in. I knew I wanted it to be humorous {because come on, who can take that wallpaper seriously?} and originally wanted to stick the Blik wall decal “Buck You” on the inside of the door …but it’s too wide to fit …boo. It wasn’t until yesterday when I stumbled again upon the hilarity that is Silhouette Masterpiece Theatre that I knew I had to go with a modern Victorian theme …with a few curious oddities thrown in here and there.

I have a few hilarious antique Victorian portraits in ornate frames {below} that were my grandma’s and a James Watkinson collage called “Meditation II: On the Laws of Change” with a monkey skull which was part of a Christmas bonus from the boss in 2008 which will mix in perfectly. And because this 1/2 bath doesn’t have a shower, I don’t have to worry about steam/water sneaking in between glass and ruining fine art. I’m admittedly excited about decorating this bathroom now …and filling it to the brim with odd little Victorian tchotchkes & art. And of course, I’ll share the finished room with you. 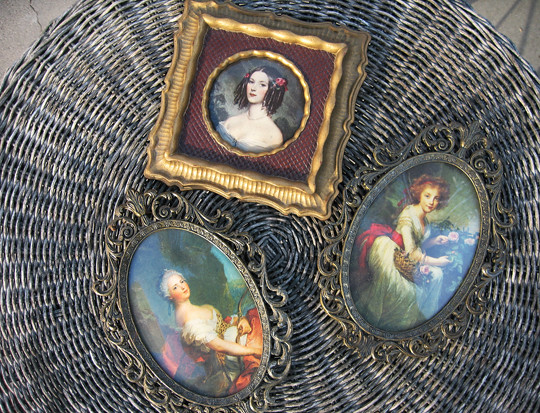 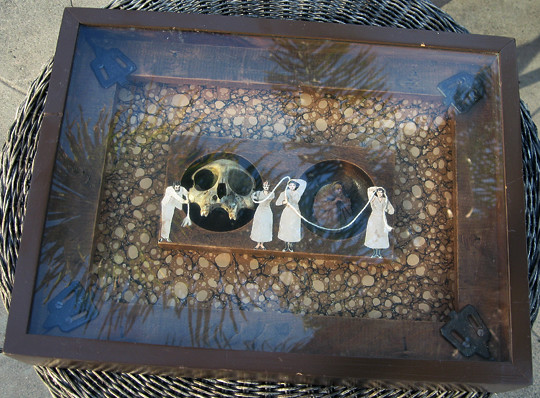 Here are the framed prints I bought from Silhouette Masterpiece Theatre
note: click on the image to go to their shoppe 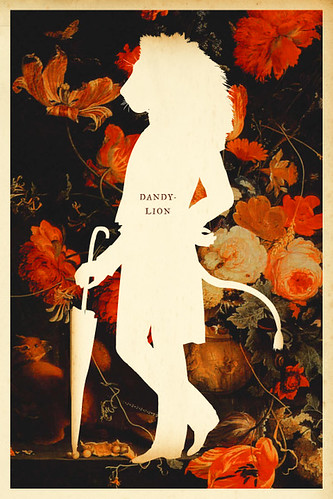 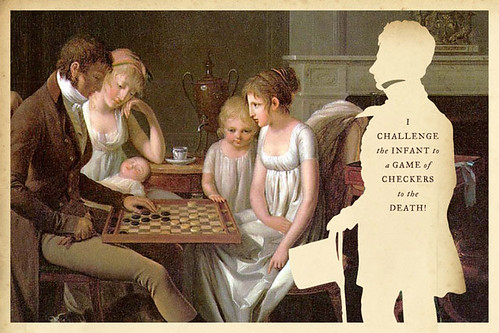 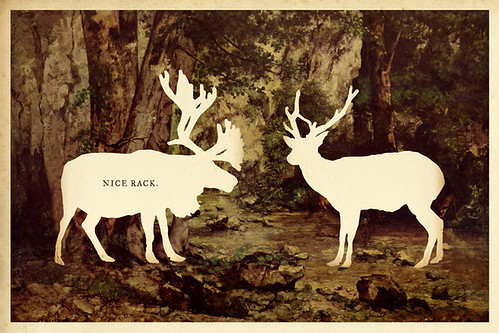 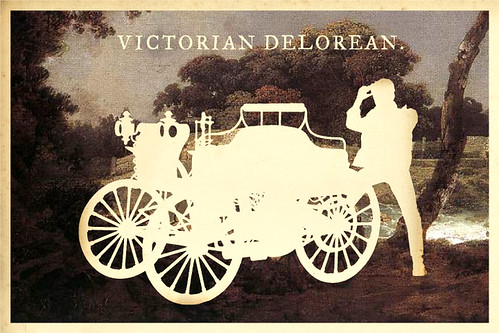 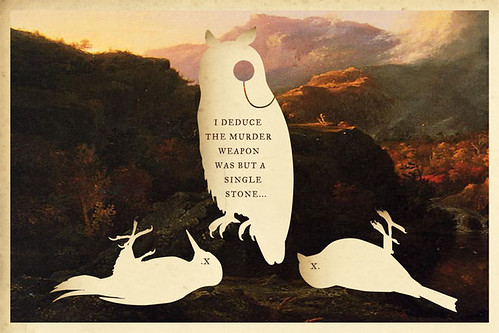 . . . because they make me giggle every single time I read them. I also bought a few Dollar dreadful family journals for reading material 😉 Definitely check out The Bazaarium shop where I almost bought the “His/Hers” pillow cases for the guest bedroom. Not just yet though …not just yet. 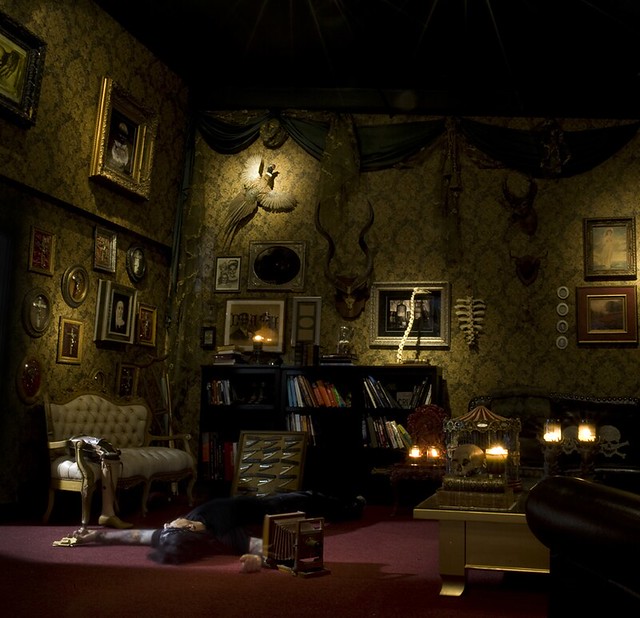 This was Nikki Sixx’s twitter background about a week ago and it’s really very close to the idea I had for our guest bathroom …so I’ve included it here for inspiration.

* By guest contributor Laney Schwartz, creator of Life is But a Dish Oh, hi there! Looks like you could use a big bowl…