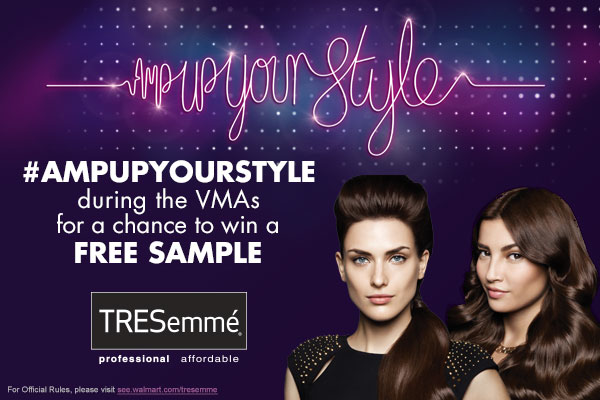 Though I rarely watch videos anymore, the MTV VMA‘s are still one of my favorite award shows to watch, and I don’t think there’s a year I’ve missed since it started. I grew up with MTV, waiting at my VCR to press record so I could have all my favorites on hand for beauty and style inspiration, as well as my own private choreographer to learn all the rad dance moves right in my own house.

Of course this all means that I won’t be missing the 2014 MTV VMA’s this Sunday, August 24th either. And to prep and get excited for it, I’m hosting a Twitter Party along with #TRESemme for their #AmpUpYourStyle campaign August 20, starting at 6:00pm PST {9:00pm EST} WOO!

Along with sharing some super awesome hair tips, I’ll be awarding 10 prize packs during the party (2 prizes per question)! Each prize pack will include one (1) $40 Wal-Mart Gift Card (ARV $40) and one (1) bottle of TRESemme Keratin Smooth Heat Protection Shine Spray, 8 fl oz (ARV $5).

To enter to win, you must join the conversation by tweeting an original tweet (no RTs) and include the hashtag #ampupyourstyle. That’s IT! 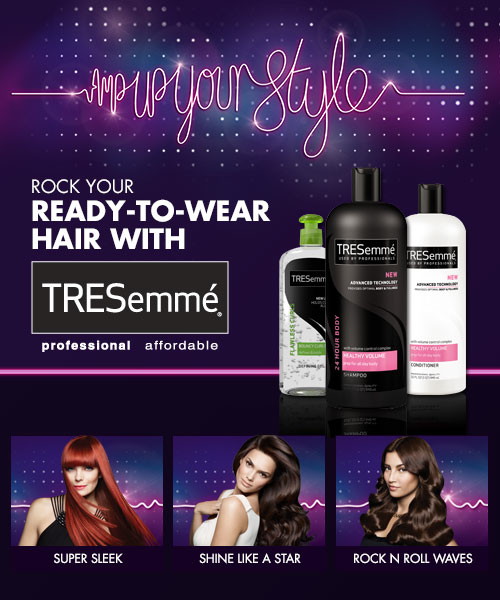 And though I’ve given up my dreams of being a rock/pop star {unless by any chance you ever happen to hear me singing in the shower}, that doesn’t mean I don’t LOVE BIG ROCK STAR HAIR. The bigger the better and my favorite way to add a little volume {besides blow drying my hair upside down and clipping the roots up to dry high} is a little dry shampoo powder to add texture and give my tresses even more lift. And for the perfect Rock n’ Roll waves, I curl/wave my hair with two different sized curling irons and in two different directions to help loosen up my waves for a more tousled, relaxed but fabulous finished look. Who do you think will have amazing/amped up hair for the MTV VMAs? Ooh, I’m so excited to watch!

* Find me on Twitter at 6pm tonight and WIN!

When The Feelin’s Right I’m Gonna Stay All Night