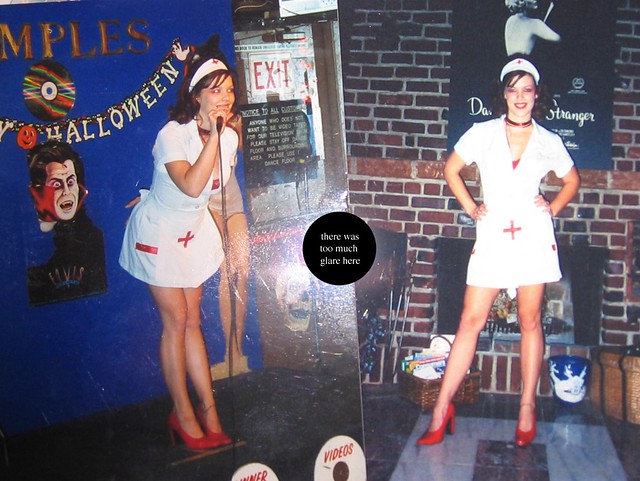 Okay, so yes, I have played into the sexy costumes before. I told you I’ve been a French Maid far too many times to count {& I have the pictures to show} but this, my bloggy friends, is Sexy Vampire Nurse because a Nurse would be the perfect job front for a vampire!

I have also mentioned in a past post that {from 1999-2002} I worked at a Karaoke bar in Burbank called Dimples on Friday and/or Saturday nights for about 3 years, off and on {ages 23 – 26} as the MC. And here is some proof of that time in my life where I basically just drank too much and acted a fool …and I {mostly} worked for tips …and let’s face it, the sexier I dressed, the more tips I would make. I guess I was just a whore like that, what can I say?

Like most of my others, this costume was not purchased, and again, I had everything I needed to make it.

This dress was a uniform that I wore to work at Hard Rock Cafe @ Universal City Walk. It was 1995 and I was 19 then {And actually, if anyone watches Clean House with Niecy (um, hello Reno 911 is hilarious), Trish used to work at HR with me} …and, if you know me just a little bit you would probably guess that I LOVED wearing my HR uniform and was actually disappointed when they told us to stop wearing the stupid little hats {not shown}.

I digress. I had the uniform and apron. My name is even embroidered on the left {but you can’t really see it}. I cut out crosses from red satin fabric and stitched them on the apron and pockets and made the hat out of left-over material {from hemming the dress ~ which I did for work, not the costume} …added the red bra and shoes, red lips and some crazy red eye-make-up and voila! Sexy Vampire Nurse.

I {clearly} had dark hair at the time and whenever I died my hair dark, I always felt a bit dark as well …a little mischievous, I suppose, so it worked well with the costume I thought.

I know, I know, not that original. But it was fun.