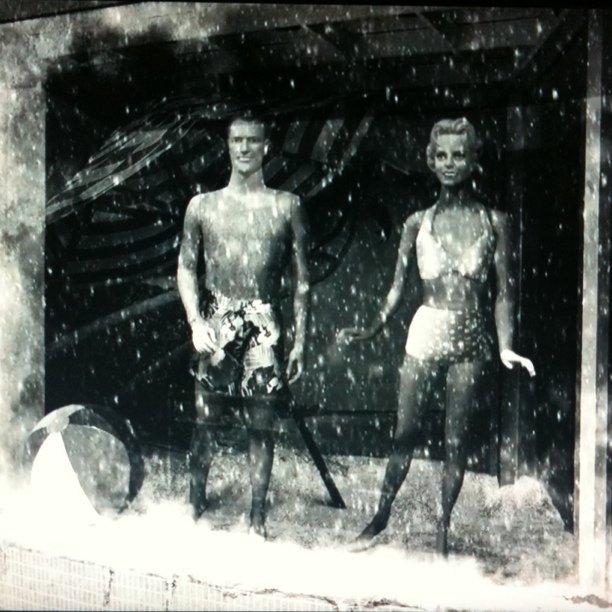 I sat down yesterday morning in the game room with a bit of coffee to flip through a magazine and since the tv was already on in the background, I randomly caught a bit of The View …wherein, the normally very conservative Elisabeth Hasselbeck announced she didn’t think it was too outrageous to have an agreement with your husband that states that he can have affairs with other women as long as he pays you a million dollars each time he does …or whatever is an appropriate sum given your monetary status. Joy and Whoopie were immediately on board while Sherri seamed to be the only one opposed to the idea.

I caught the show in the middle, so I assumed it was just a passing topic they stumbled on but realized when guests Jerry Weintraub, his once gorgeous wife Jane Morgan …and a much younger red headed woman walked on stage and sat on the couch, they were referring to him and his lifestyle.

Since I was really in the dark about his affairs, I was a bit confused as to whom the red head sitting next to Jerry’s wife was …only to find out that she was indeed, his lover, but that Jerry was still married to Jane, his original wife …who agreed to stay married and let him cheat if she was given a million dollars each time he did.

With a less religious vibe than Sister Wives or Big Love, the whole affair seemed a bit polygamist considering Jane and Susie are now long-time friends …though only Susie is intimate with him and isn’t married to him.

They were all there promoting an HBO Documentary about Jerry Weintraub called “His Way” that premiered last night on HBO …which I quickly searched my DirecTV guide for, recorded and watched with the husband yesterday evening …and it was quite good actually.

Here’s a short clip of the story of Jane finding Jerry in bed with another woman {before he was with Susie, the red head} …and her reacting to it. {note: I recorded this from the documentary on my tv so it may get removed at some point due to rights and all …or not, we’ll see}


I guess the question sounds a bit like the movie Indecent Proposal …but this million dollars isn’t coming from an outside source and doesn’t make you a whore …it’s coming from your man. My husband argues that the million dollars belongs to the wife already because they are married …unless there’s a prenup, I countered. But this story does sound familiar. Remember that whole Kobe Bryant rape accusation …wherein his wife was rumored to have received a $4 million dollar 8 carat purple diamond adultery ring? Maybe they have “an arrangement” too? You never know. I’m not interested in it for my own marriage but I say to each his own. If it works for them, who cares?

Lovecats …I’d love to hear your thoughts. Would you …let your man have affairs with other women for a large sum of cash money or bling bling and stay married to him?

. . .sure looks a lot like this outfit I wore last September …just sayin’ {and yes, this photo is ridiculous! lol, reminding me…