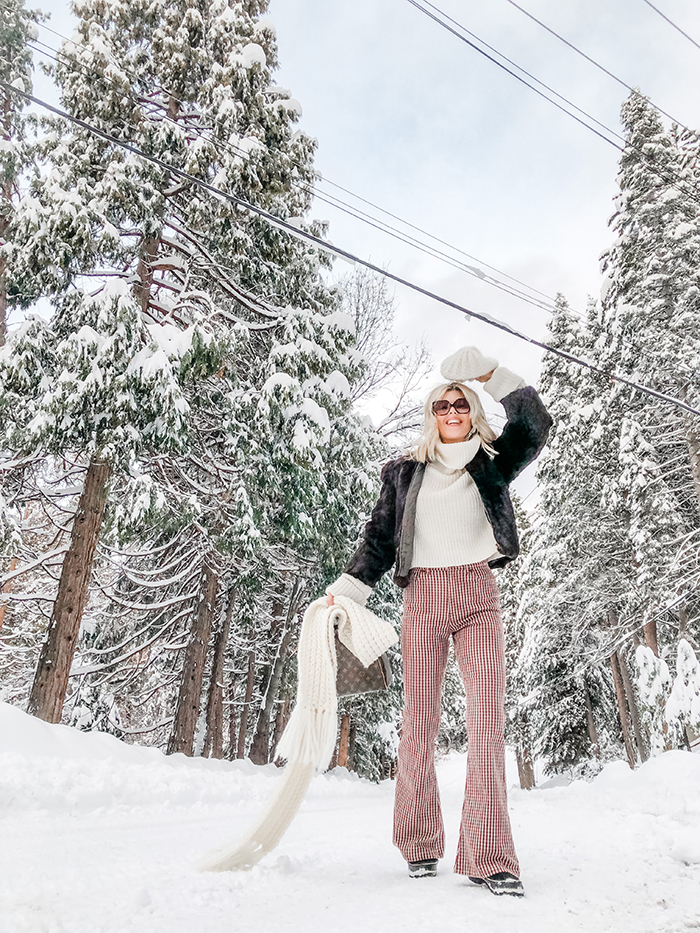 * Plaid bell bottom jeans from Lee (which is pretty ironic because my mom has an ICONIC pair of plaid bell bottoms from the ’70s in this exact same color scheme but the plaid print is slightly larger)
* Oversized turtleneck sweater, I’ve been wearing like crazy lately and have had forever – like since the ’90s-forever. The arms are really long on this sweater as well and I just found a new/similar version for a ridiculous price!
* Deep brown vintage fur coat I’ve had forever. Seen once here AND LOL to this outfit back in 2009, even though I still have everything pictured in that post so I shouldn’t laugh (purchased vintage coat at a thrift store over 20 years ago)
* Sorel snow boots, cuz well, it was snowing.
* Louis Vuitton Speedy… and wow, I haven’t brought her out in a LONG TIME, but she seemed fitting for this look.
* Chunky knit scarf and hat I think are Bebe from ages ago
* Gucci sunglasses – or Le Specs, I can’t remember 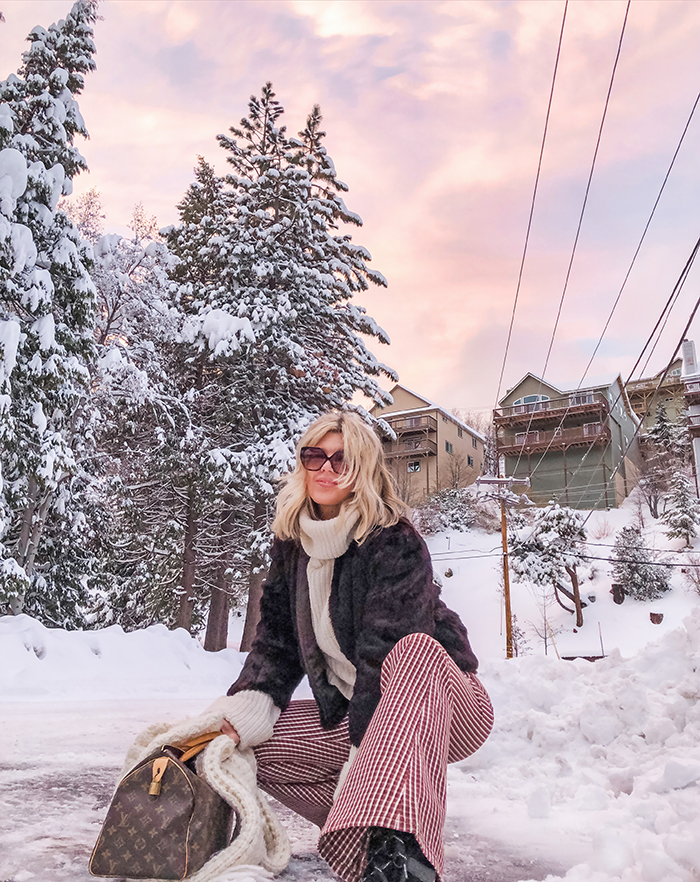 As I was driving through this small town yesterday, just out running errands and making my way through the windy streets and narrow roads, surrounded by walls of snow left by the plows, I honestly had a moment of just pure bliss and honest gratitude.

Sometimes I can’t believe I actually live here, in this little town, experiencing four real seasons and actual snow… like, lots of it.

I’m sure I’ve said this before but when I was a kid and we’d travel (which honestly wasn’t that often, and usually by car) and we’d drive by little towns and I’d just stare out the window wondering if real people actually lived there and if they did, who were they, what did they do?

Growing up in LA is surreal, which you don’t really realize until you move away from LA, but it’s so vast and bizarrely beautiful, and to most outsiders, feels like a movie in a way, but was “normal” to me. It was the little towns that all looked like movie sets on the Universal lot that seemed unreal to me, and now I live in one, and you know what?? It’s also surreal. And bizarrely beautiful, so much so that I rarely, if ever, want to drive down the mountain and back to reality.

Maybe that’s what it is in a nutshell. I feel like I’m in a safe and small little bubble up here (which is far from true) but compared to the vastness of the big cities at the bottom of the mountain and the long freeways and huge stores and shopping malls, just the thought of being amidst the fast-paced lifestyle causes me a bit of anxiety. It’s clear that I prefer the small town life, one I was so curious yet also completely confused about… what do people do there, mom? I’d ask as we’d drive by?

Now that I have lived here for just over 8 years, started a business and have no intention of going elsewhere any time soon, I know what people do in small towns… pretty much the same thing they do in big cities, but we drive much slower, and walk more places, and enjoy living amongst nature (though I do miss the massive palm trees in LA and lemon trees we all had in our backyards and pools) but mostly I love the small feeling of community I get here, knowing so many people in a way that feels reassuring rather than anxiety-inducing.

Though we’ve had enough snow this winter to scoot right onto summer, I still enjoy the seasons and looking forward to the next season. There is always something to talk about with someone you bump into when the snow berms from the plows are as tall as you are. (For those who may not know, a “berm” is the wall of ice on either side of the road left by the snow plows as they plow the roads, and mostly, they’re a nightmare, because they tend to “berm you in” your driveway RIGHT AFTER YOU’VE SHOVELED – but I had no idea what a berm was before I moved up here, so there’s that).

I put on Untamed Heart last night because I thought why not? It’s surely astonishing having so many film and TV options at our fingertips with a click of a button, but it’s equally astonishing spending an hour searching for and trying to decide what to watch! So sometimes I’m just like THAT’S IT. WE’RE WATCHING THIS. Anyway, Chad had never seen it and, of course, it had us both tearing up at the end, but I won’t spoil it, if you know you know… but what kept catching my eye was the placement of the SNOW in the movie. Once I pointed it out, we both were giggling about it the entire movie!

First of all, the snow was clearly “placed” in the scene’s locations because in no way would snow ever stay the way it was in that movie… and at one point Christian Slater hopped around the snow patches as if to avoid messing them up. If I had never lived on this snowy mountain, I would have NEVER known or even second guessed the snow placement. And obviously it didn’t take away from the movie, because I’ve seen the movie a million times but never once since I’ve been up here and the snow was just so blatantly wrong it made me giggle.

I guess this is all to say you never really know what life experiences you’re actually going to get from your actual life experiences and the choices you make in one direction or the other. You think Oh I’ll do this and then I’ll have this particular knowledge and/or skill or no, I don’t want to do that because blah, blah, blah but in actuality, you gain so much more knowledge and learn and adapt to so many little nuanced things you may have never even thought about… so take the risk 🙂 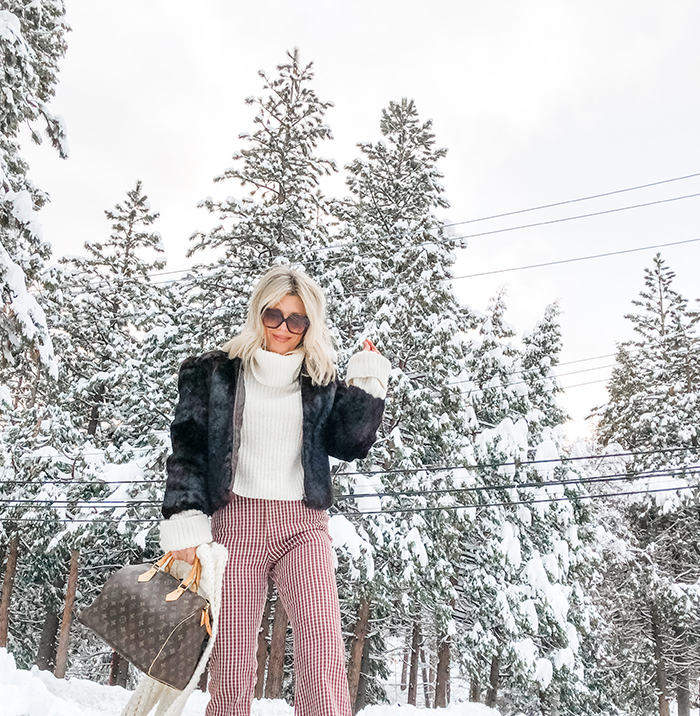 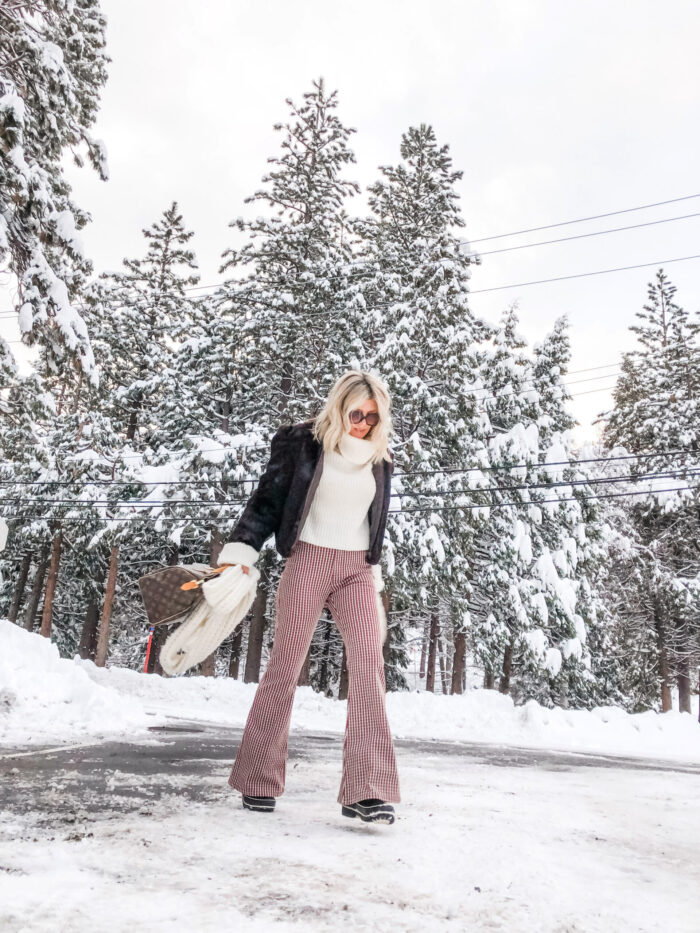 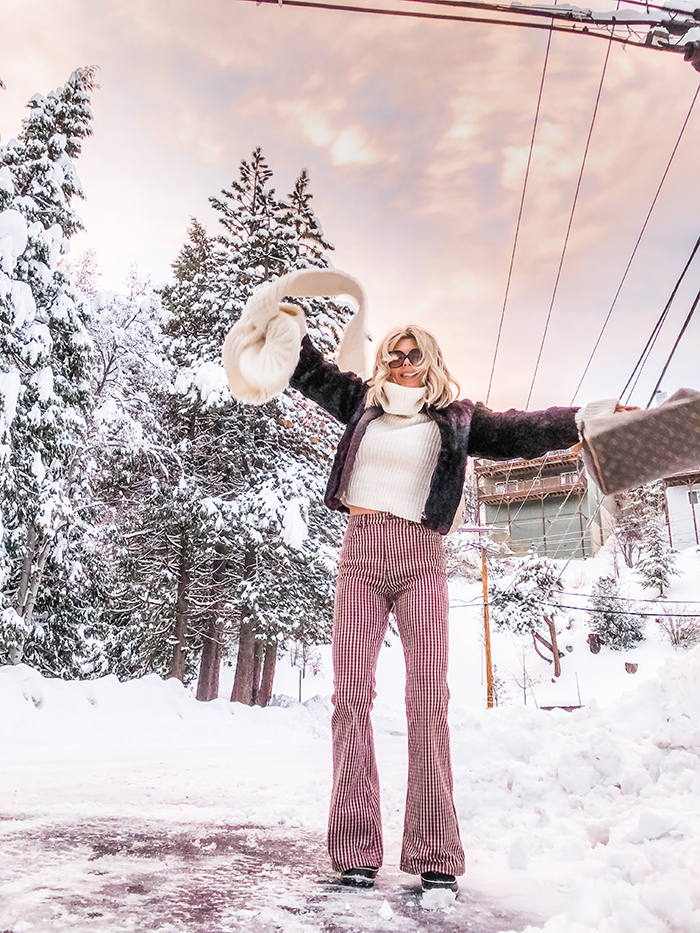 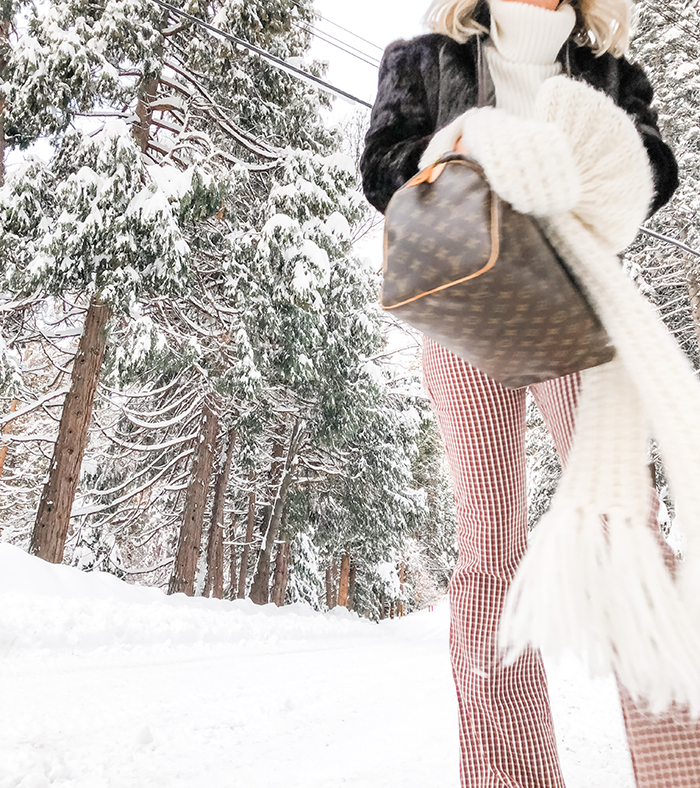 NOTE: The above shot is to show the check of the plaid on the jeans, since it sort or blurs in most of the other shots. 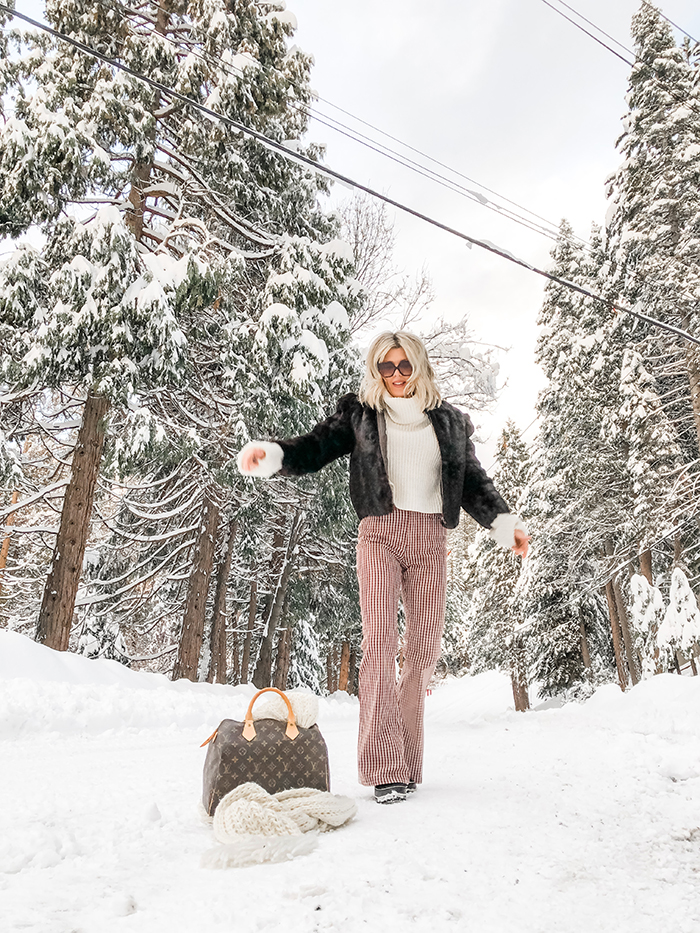 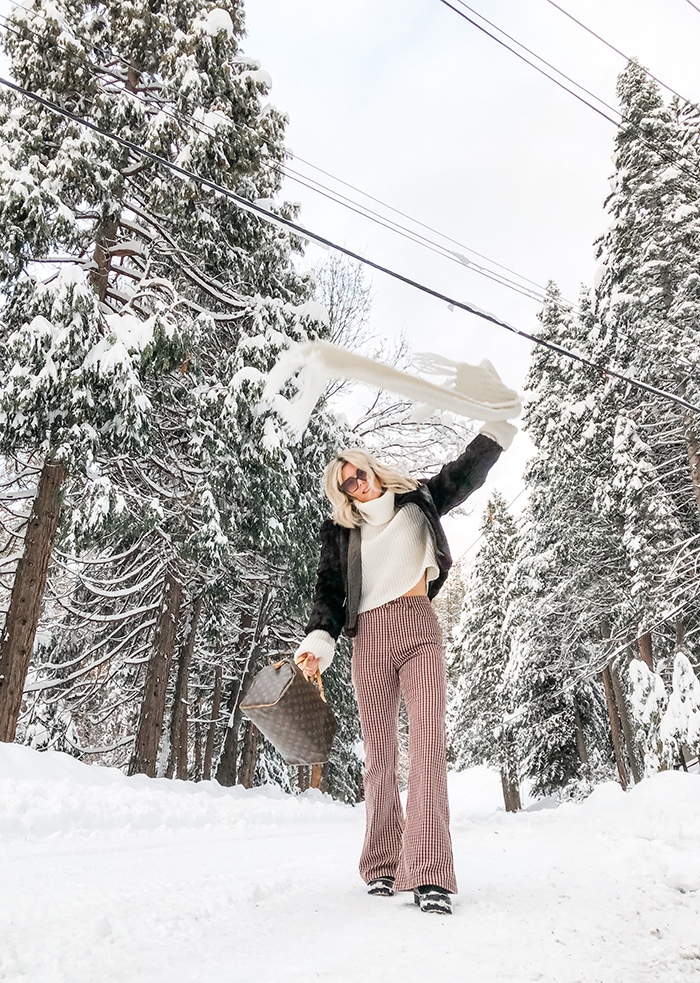 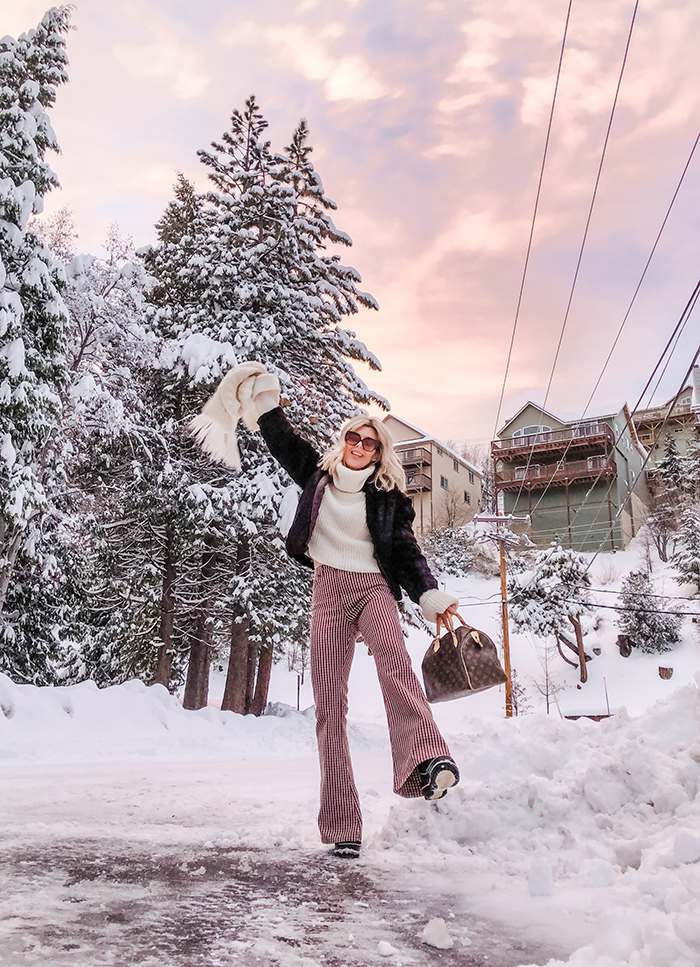 Live for Each Second Without Hesitation

Beneath the Palms ~ Pasadena Town

In our quest to find an idyllic yet affordable place to live in or around Los Angeles, which in itself is an oxymoron, husband…