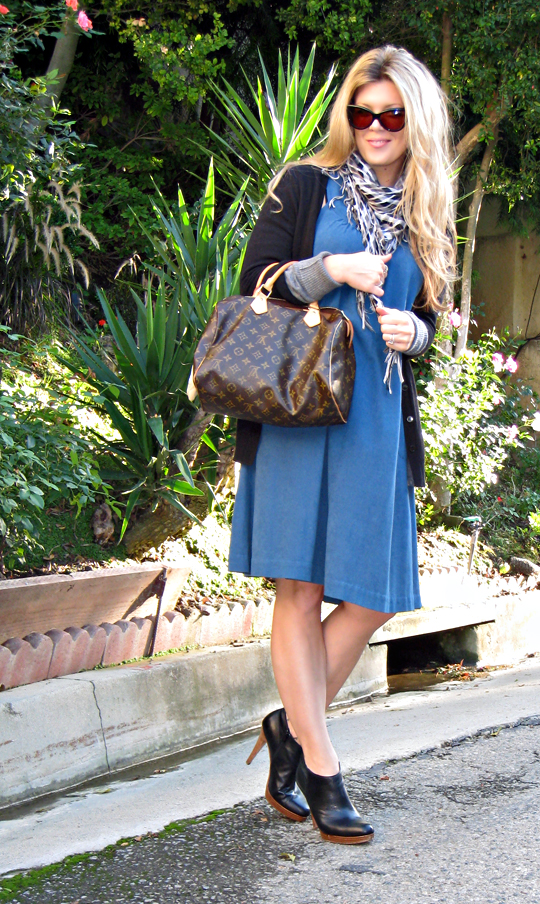 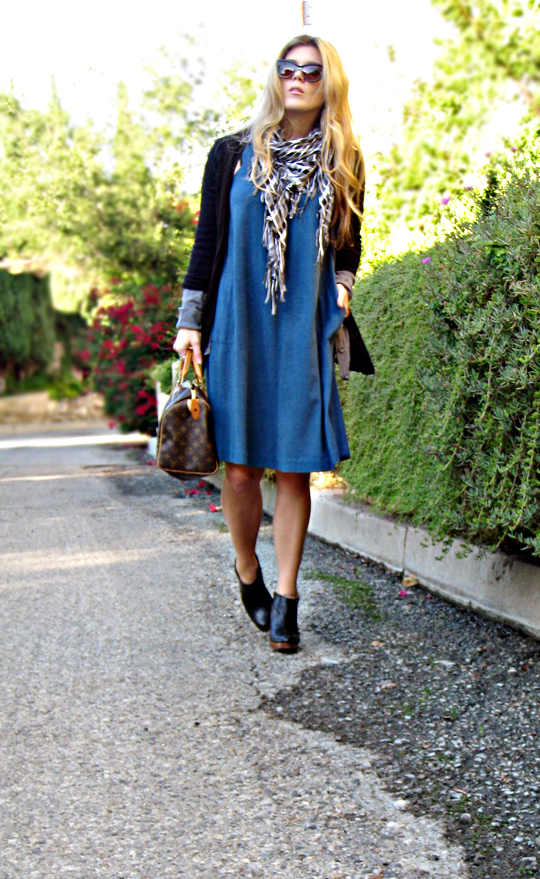 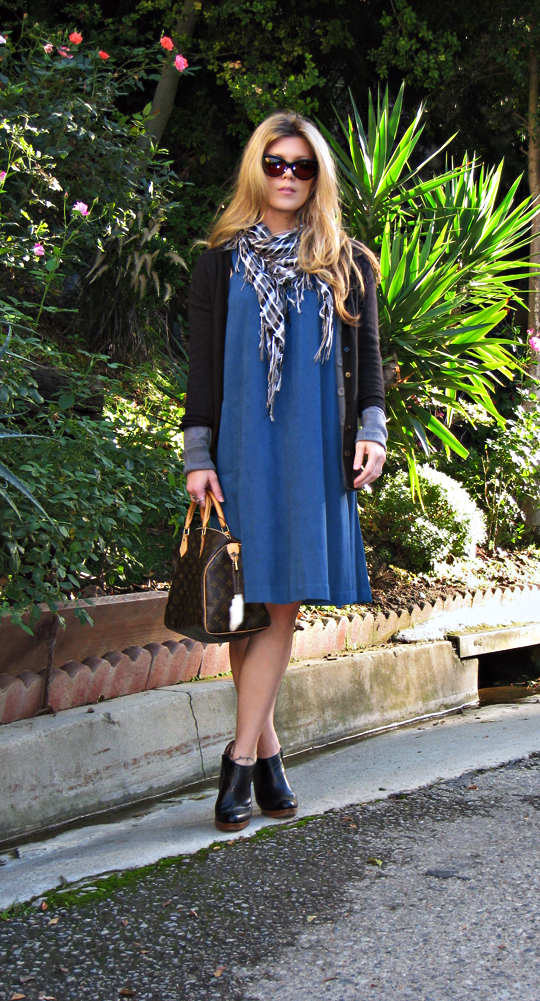 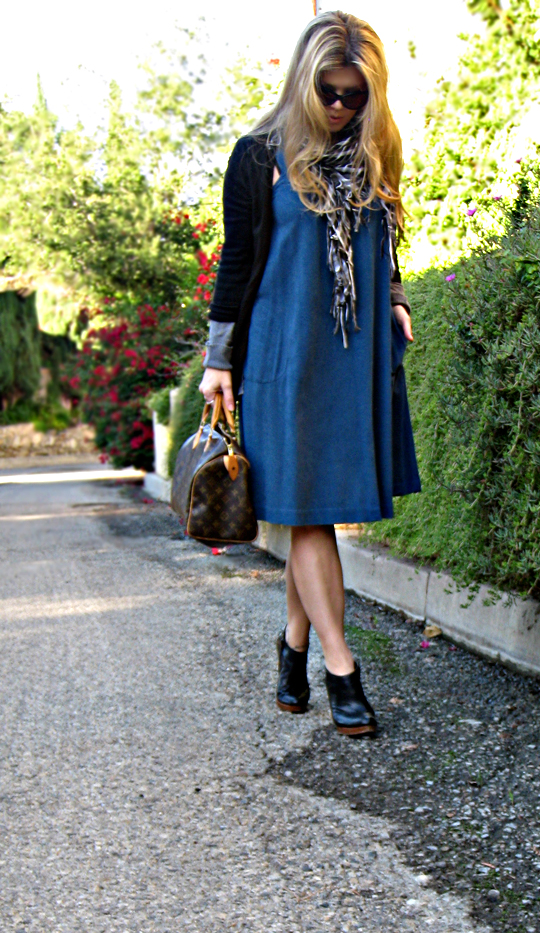 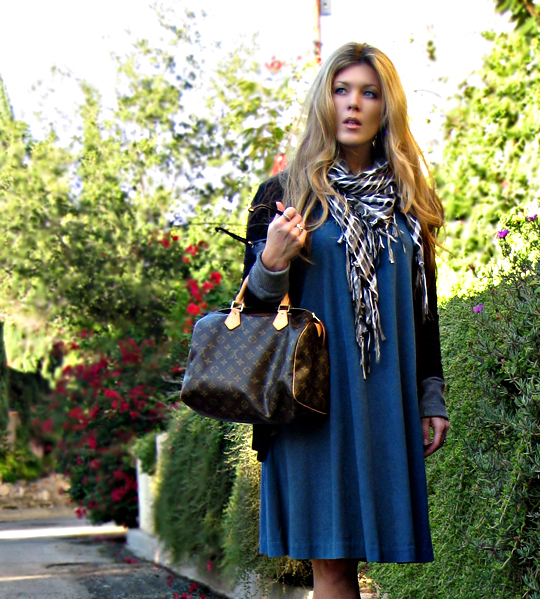 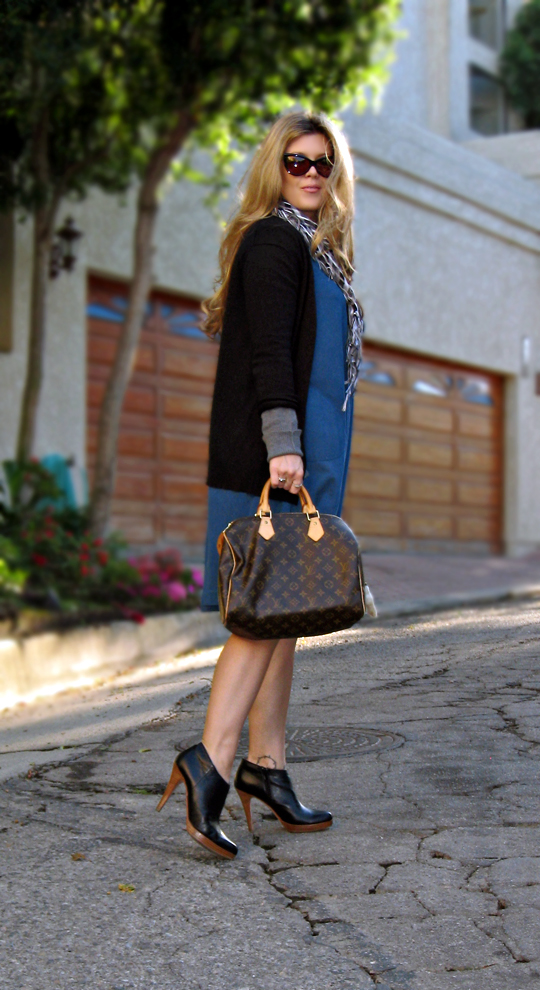 What I’m Wearing
* Vintage ultra suede teal tent dress with pockets. Yes it has no shape. Yes it came with a matching belt. Yes I could have worn it with any belt. No I did not feel like being cinched all day long. Yes it resembles Mama Cass’ moo moo dress in the video {link below} from the song where I got my title …and most possible that the dress is from the same year, 1966 …I’ve worn this dress once before, last summer, belted and pulled up short with gold accessories {and it’s tealer in person …more like in the photos from the last time I wore it}
* Gray Heritage 1981 long cardigan with black Victoria’s Secret long cardigan layered over
* Plaid scarf …no brand
* Steve Madden ankle boots from 2006
* Tom Ford cat eye sunglasses
*
* Title: Lyrics from The Mamas & The Papas “Monday Monday”

Seriously, how does Monday creep up on us so quickly? Though this particular Monday {evening} the NY Jets play the Vikings which will be an interesting game considering the Vikings are the husband’s favorite team and the Jets, mine. The husband follows Brett Favre …and whomever is on his fantasy league and I could care less about any team other than the Jets. So I’m kind of excited. Wow, Maeg. Wow. I think you’re talking about football far too often these days 😉

I watched Dear John last night trying to fall asleep but it captured my attention and I sobbed and sobbed and sobbed at the end. It was good …and maybe I was in the mood to sob. Amanda Seyfried is so pretty it’s hard to look at anything else on the screen {though Tatum Channing isn’t too hard on the eyes either} …and her hair. Magnificent! I knew she could sing because of Mamma Mia but half way through this movie she whips out an acoustic guitar and starts singing a song that she wrote and it was magical. I know it sounds like I’m total girl crushing right now but I think I’m more in awe of her talent and radiance than anything else. I guess after her hilarious performance in Mean Girls I just didn’t expect the range. But wow whatever “it” is, she’s got it.