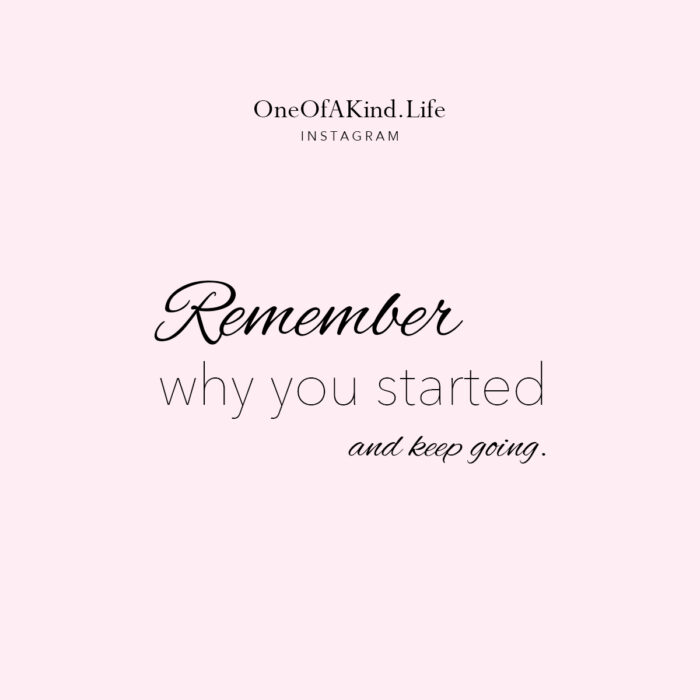 So often when we embark on a new project in life, which could be anything really in regards to having an idea, thinking it through, deciding to take action, making a plan for it and then going in a forward motion, we feel not only a sense of control but also a sense of accomplishment at having just begun.

From a new business to a hobby to a home project, a personal health goal or family or relationship goal, big or small, the act of setting a goal is also about committing to something which ultimately we think is going to better our lives in some way or another. Whether it’s a “have to” or a “want to” situation we just have to get done, the underlying goal is simply to make us happier. Period.

When we begin it’s always thrilling, right? When we begin, no matter how drastic the step, we feel exhilarated. Not only have we begun something new, but now we’ve taken action and are proud of ourselves for doing so. The excitement of starting something new and the feeling of accomplishment that comes from it is all lining up with our reasoning for doing it in the first place and we feel like we’re moving forward.

Then about halfway through, or maybe even a few weeks or a month in, we start to lose steam.

Slowly we may realize it’s probably more work than we thought it was going to be or it’s creating more stress than we anticipated and we get uncomfortable in the process and begin to think, what is the point?

If we started the “thing” to make us happier and suddenly it’s making us extremely unhappier (even if temporarily), we can’t help but to rethink its importance in our lives altogether and wonder if the end result is truly worth all the struggle to get there.

This is the tipping point… this is the point that makes or breaks us. We don’t care that the uncomfortable zone is also the growth period we need to go through to realize our dream, we simply feel that it’s now become too hard or more importantly, not worth it.

So we ask ourself…

If I stop now, will I look back with regret and then feel guilt and shame for quitting?

Is this temporary struggle worth it if the result is a happier, better life?

The answer is, probably. yes. to both.

Unless the work we’re currently putting into the goal is negatively affecting our life (or loved ones), which is probably NOT the case, we’re going to have to be real with ourselves and recognize or admit that we are just littering our brain with excuses to try to stop the discomfort.

But if we stop the discomfort, we also halt the growth and the potential happiness that will surely come from it.

If we had the idea in the first place, it either came from the universe through us or it came from a place of lack. We must have felt we needed to accomplish or change something because we weren’t happy with our current status, whatever that may have been, and wanted to feel differently. So the point here is that in this moment we have to remind ourselves that our future self will ultimately thank us for pushing through the hard parts and all the excuses and keep going. Or else, why would we have begun in the first place?

Oftentimes what has happened behind the scenes of our subconscious mind is that somehow our original “reason for doing it” expanded into something far bigger. We may have had some early success (probably the beginners luck theory) and then suddenly our little reason for doing it turned into a much larger reason for doing it. Yup, we got greedy. Then a few weeks later when the excitement tapered off and the results weren’t as amazing as they were in the beginning, we felt let down realizing we probably wouldn’t meet our “what if” goal and so we get the urge to give up entirely.

Here’s a quick (and simple) personal example: My ex left all of his belongings behind. I spent a year making sure he didn’t want any of it. I spent another year wavering between feeling weird about getting rid of his stuff to feeling like I NEED to get rid of his stuff because I wanted it out of the house. I sorted through it a million times. I donated a LOT of it to local charities. I kept what I thought had value enough to sell. My original goal in selling it was not only to get it out of my house but to also pay off the debt I have incurred over the last few years in vet bills due to Trevor’s back surgery, etc. I was happy with that goal. Suddenly though, my goal became much larger… WHAT IF I COULD MAKE ENOUGH MONEY SELLING ALL OF HIS STUFF TO BUY HIM OUT OF THE HOUSE? Now, this is a very far-reaching goal. To think I could sell enough stuff to make nearly $100,000.000 is just not realistic, but it would be amazing if I could, right? So obviously my little goal of paying off my vet bills/debt (realistic goal) to the very unrealistic (but ironically humorous goal) paled in comparison and soon my motivation to keep selling all his stuff lost momentum and I had to convince myself that all the time and effort was/is worth it. Of course I’m still doing it because bottom line is… I need it out of the house (underlying happiness goal 1.), I do want/need to pay off my vet debt asap (underlying happiness goal 2), and the combination of both will be insanely gratifying on more than one level (underlying happiness goal 3). And even though those 3 goals will equal a certain amount of happiness, the insane amount of happiness that would come if I could actually make enough to buy him out is far greater, so I have to…

Remember why I started and keep going.

As we near the end of the first month of 2019 I urge you (and myself) to keep going… to remember why we made resolutions and set goals in the first place. Remember that our original motivation to succeed is good enough. Anything else that comes is a bonus. The discomfort we may feel now is temporary and I assure you, it will all be worth it once our dreams are our reality.

What Should I Wear For… A Spring/Summer Wedding

If you’re attending a Spring or Summer wedding, daytime or night, a bright and cheerful dress with a hem that hits mid to lower…