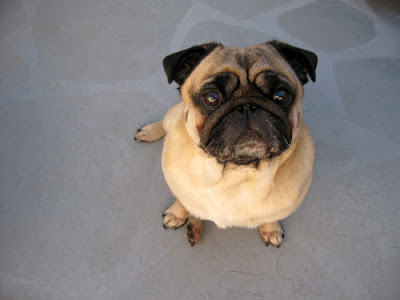 This is Bebop Pugman.
He was my husband’s dog and now he is ours.

I must confess that I do not shower this little man with enough attention. He is a very very very good dog but has no idea that when I was about 10, I made up my mind that I did not like Pugs. My little [boy] friend next door, with whom I used to shoot bb’s at empty lined up soda cans, pick up frogs forcing them pee, form exclusive clubs that other kids on the block were not allowed to join, also used to get puppies that his parents would never let him keep. There was a really cute and tiny fluffy white one, an adorable beagle, and the cutest pug puppy ever. I fell in love with the puggy and if I recall, his name was Brownie. One day, in the short amount of time the pug was around, I caught it eating it’s own poop. That was the end of my love affair with pugs.

note* as far as pugs go, Bebop is the cutest I’ve EVER seen.

So years ago I bought a set of three vintage Whiting & Davis gold mesh bags on eBay and this was one of them….