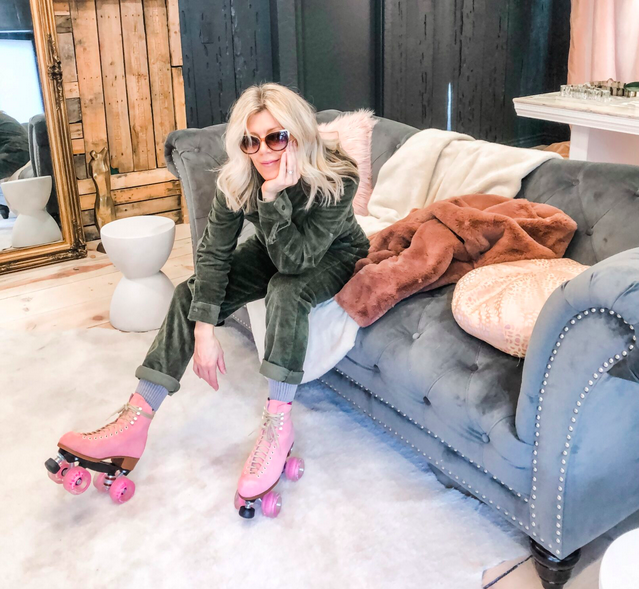 A few nights ago I fell on my skates. It wasn’t the first time, but it was the hardest fall by far and it SHOOK me to my core.

Falling on skates is inevitable, but for some reason it’s never when you’re doing a cool dance move or trick, actually, that’s not entirely true, my first fall, which left an undeniable hole in the drywall of my entryway (OOPS!) was when I was practicing “the downtown”, a dance move I still cannot seem to master, but usually, USUALLY I fall just randomly while losing balance or in this case, hitting something with my wheel.

I had just changed the wheels on a pair of skates and I pulled them on just to see how they’d roll. I was literally going to spend 5 minutes testing them out and take them off and make dinner. I rolled backwards down the hallway and forgot that I’d moved the bedroom runner rug out a little further and my wheels caught and then before I knew it they were out from under me and in that moment time seemed to slow as I realized I was airborne and about to land flat on my back.

Of course my arms instinctively went out to brace my fall and took a large amount of the impact and then I felt my lower back near my tailbone and butt hit the wood floor, followed by my shoulders and finally my head slamming back on the rug beneath me.

I was in shock and laying on the floor for a moment catching my breath as the dogs came rushing toward me and kissing my face to bring me back to life. It’s that moment where you don’t want to move because you’re worried you can’t move, but then slowly you regain awareness (not consciousness, I did not black out) and realize you’re okay… and then you start to feel every bit of your body pulsing with adrenaline and wondering how and what just happened.

At first I felt my arms working to heal whatever impact they just took on… my forearms and upper arms and shoulders all got it, but after some time, they were okay. Then, since I landed on/near my tailbone, I worried about healing because it’s the worst pain and the longest to heal… but I felt only a dull ache. And that’s when I realized I hit my head… and immediately understood why skaters wear helmets and thought maybe I should get one. (if this fall had happened outside, it would have definitely done more damage)

The head trauma worried me. Yes, I landed on a really thick soft rug, which definitely softened the impact, but suddenly I was very tired and my eyes weren’t focusing and then I quickly made dinner because I realized I hadn’t eaten and maybe I was just hungry and anxious due to the worry about my body and the fall. But while I was eating I kept dazing out and caught myself a handful of times just staring into space. Which also worried me, of course.

My anxiety has always been about my health. I feel something weird in my body and then almost immediately… WHAT’S THAT? AM I DYING? sort of health anxiety that sends me into a panic spiral. It’s 99% ridiculous and 100% caused by my mind, but this time I actually had a strong case for worry.

For the rest of the night I just felt off. Though I was insanely tired, I didn’t want to fall asleep because they always say don’t fall asleep after you hit your head in case it’s a concussion. I mean, it wasn’t a concussion, but I was anxious about it anyway. And obviously I DIDN’T WANT TO DIE!

Later that night after Chad returned home and we were laying on the couch watching a movie, tears flooded my eyes and started dripping from the corners… the sideways kind of tears that slowly escape from one eye and tickle the bridge of your nose as they run into the other eyelid if you don’t catch them in time, but you also don’t want to wipe them from your eyes because it will alert anyone near you that you might be crying. I didn’t want to get into a conversation about why I was crying because I wasn’t sure I even knew why. I felt like my body was just finally releasing the trauma it had endured and so I allowed it.

Eventually I traced the tears down to not just the fall but the story around the fall I continued telling myself internally which had to do with aging and wondering if I should be skating at all even though I love it… but I also have this ongoing childhood story that anything I loved doing was eventually ripped out from under me and so whenever I’m on the brink of having a love for something that really brings me to life in a way, it also comes with a worry that it will be taken away. And I think each time I have fallen, that’s the story that also pops up in my head. And the only way to change the story now is to continue doing the thing that I love.

And so, the next day, still shaken to the core and achy, but thankfully in no intense pain, I forced myself to go outside and put my skates on and roll around for a bit. I was scared, lacking confidence, wearing tons of thick padded layers and my wrist guards but I went back at it.

Though I did feel some pains in my inner thighs I didn’t think were even affected by the fall, I was okay, but not confident at all. I realized that mostly, I was afraid of the wheels I had swapped onto the boots I love just to see if they would react differently on different skates, and they did not. I got back in the car and took them off after skating for only 5 minutes or so, feeling no better mentally than I did before. Instead of calling it a day though, I put on a different pair of skates, a sturdy pair with big wheels and took them for a roll. I went in for my normal spin and the leg pain was gone and just like that I had my confidence back. 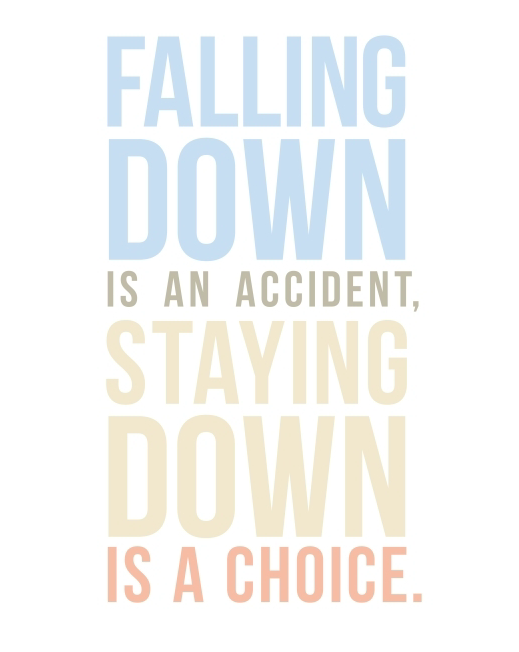 We metaphorically fall and get back up countless times throughout our lives and at all ages. From jobs and careers and businesses to relationships and expectations and disappointing letdowns, to anything that we care enough about to explore and/or spend our time doing, we experience a roller coaster ride of ups and downs. Sometimes it takes a few days to recoup from a downfall and sometimes it takes years. The point is that we get back up and try again. Since my fall (in this case) was literal, I knew that if I didn’t pick myself back up again and physically try again that it would be a complete betrayal to myself which would devastate me in more ways than one.

I love skating… like think about it daily kind of LOVE, like try to finish everything I have to do in a day as quickly as I can to go skate kind of LOVE. Like, LOVE, LOVE. It is the side hobby/passion I’d been searching for for what has felt like forever. An activity that doesn’t involve any work, just fun… because in the past year I’ve realized that I have a problem with “fun”. I kick myself for fun when it doesn’t feel productive, so this is all fun, and all me and since it’s also a great workout, I don’t kick myself for spending time doing it, ever. But I don’t do it for the exercise, I do it because I LOVE it, because it’s all I want to do every day… the health and fitness aspect is just a bonus.

But speaking of fitness, since I have been skating (mid-January 2021) and I skate almost every day, even if it’s just 30 minutes in the house, I’ve felt a new kind of balance and strength and connection with my body and my legs have definitely tightened up, in fact, everything has tightened up really. My ankle is getting stronger, which is amazing because I worried about even being able to skate at all given the pain I was so frequently in. And I think by far, one of the best bonuses has been connecting with other women socially (on IG) and in real life here on the mountain, which is also something I’ve been searching for since moving up here, and especially after my divorce. It’s amazing how this really super fun activity that makes us all feel so free and happy has also connected so many women… So I had to get back up. For me. For the women. For everyone who has ever fallen, ever. I had no other choice. 🙂 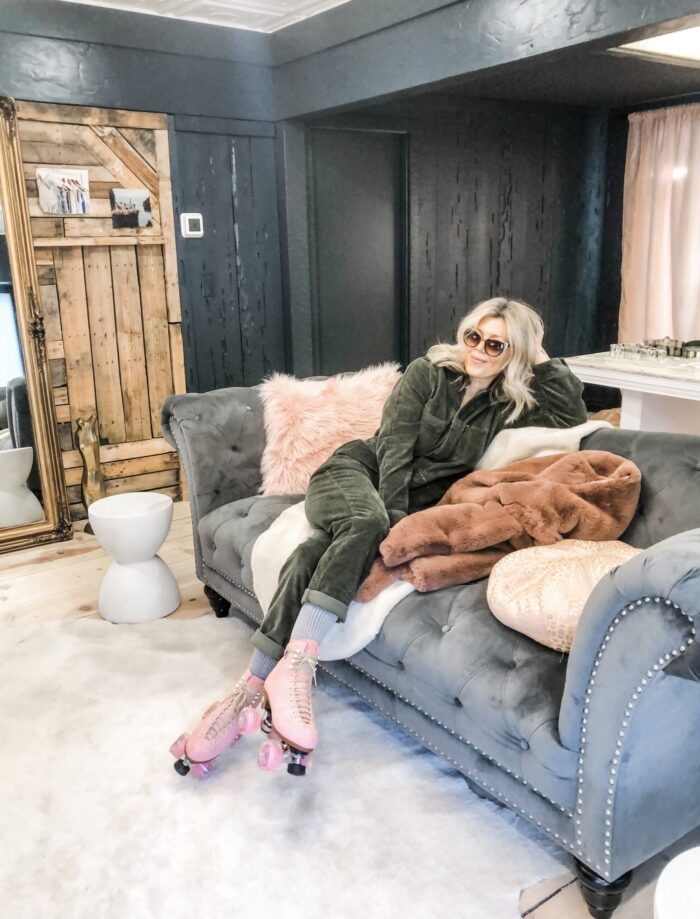