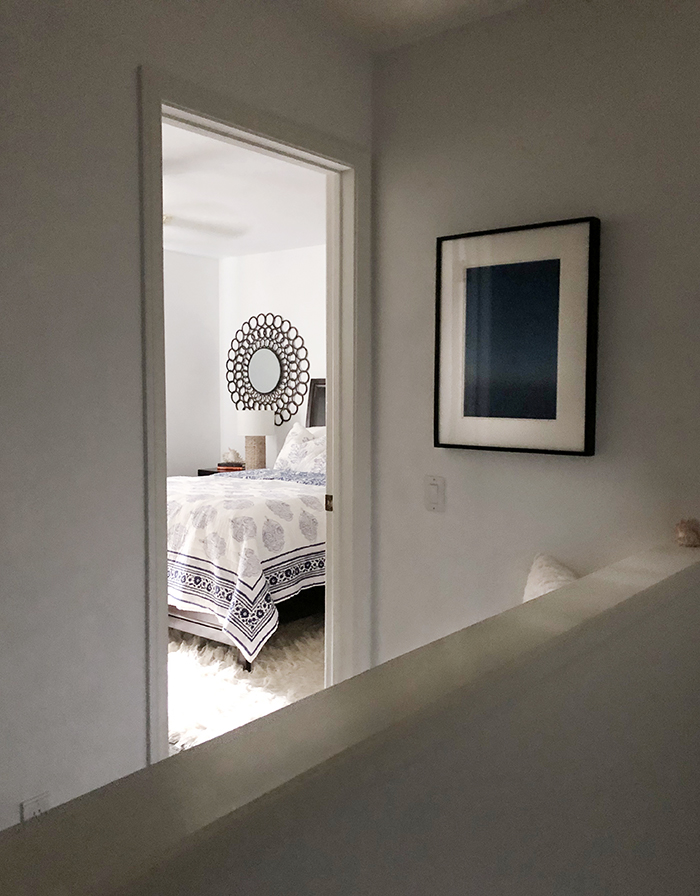 This seems like a silly post simply because this guest room is very similar to the guest room in my last house AND my master bedroom two houses ago. Like I said though, I was determined not to spend a dime on furnishings when we moved into this house since it’s technically temporary and between the two of us, we have enough furniture to furnish at least two houses (though admittedly, I broke my rule this week and did a little thrifting for some new living room finds). Also though, I quite enjoy repurposing decor in new spaces and even when they look a little similar (which, I have to say is also a little bit comforting) it’s the general feeling I get when I walk in the space that I love, which also means that it will be a peaceful space for guests –hopefully.

So this is the guest room upstairs, right next to the girls’ room. I’ve used my very same beachy blue bedding, vintage seashells (which were my mom’s) and decor, white Panton chair (a gift from my boss/art gallery days), flokati rug (used to be in my office) and DIY Tassel curtains (which were in the old reading room – but first in my old-OLD office/closet/dressing room, and even though they’re not white-white, they match the rug, which is ivory, so they complemented each other well -enough (though obviously not my favorite choice). I should really remove the black tassels because they just don’t work in this space, HOWEVER, I really like the tassels and don’t want to remove them so I live with the lack of consistent design… for now anyway. I wish I would have taken the bamboo blinds with DIY tassels I made for the last guest room. They would have been perfect. I honestly can’t believe I left them behind! 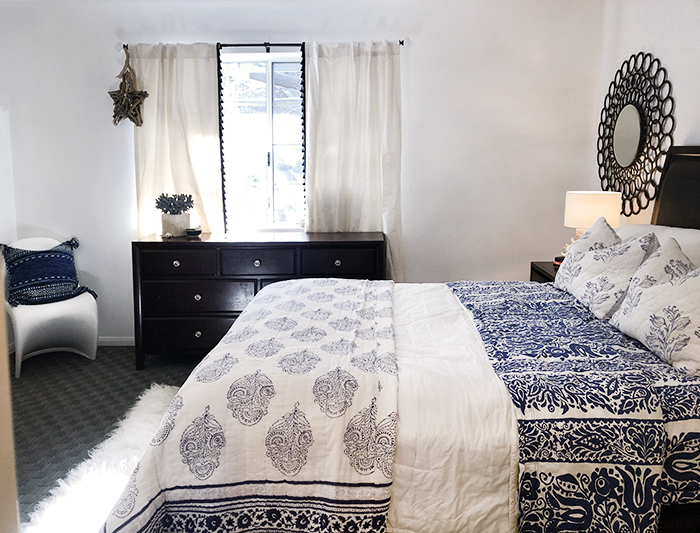 You may recognize the large blue and white pouf in the hallway from my old living room, along with the garden stool (which, I am proud to say, I found at a local thrift shop a few years ago for $35) and a few faux coral pieces as well. The cute wooden surfboard wall hook belongs to the man. I would have done something fun with my rustic orb lanterns but there’s a ceiling fan in the room, so I’ll save those for another room. Unfortunately I can’t do anything about the carpet unless I buy a really large rug (and actually a LARGE woven rug layered under the flokati would be nice). Sometimes it looks grey and other times it looks green… It was replaced right before we moved in and it’s not my favorite, but I can’t really complain either. At least it’s new. 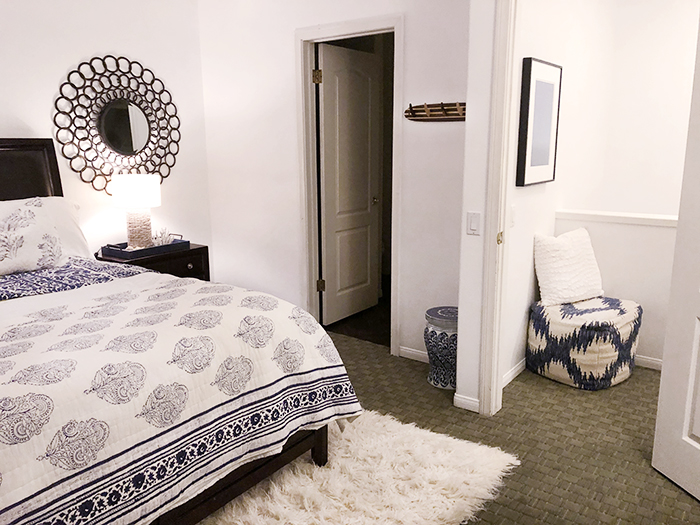 The furniture set is different -though looks similar, it belongs to the man and I think the dark wood looks rather nice in this space… and it’s refreshing to see a full matching set including dressers (since literally nothing I have matches anything at all). I originally thought I’d use this room for my office/closet situation, but A. I didn’t think it was large enough B. I didn’t want to have to carry the dogs up and down the stairs when I worked and C. We wanted a guest room…

We currently keep a gate at the bottom of the stairs so the dogs never come up here, which is nice, because it keeps the dog hair contained downstairs. This is also important because Chad (the man) keeps his clothes up here, which he is not entirely happy about, but he’s getting used to it 😉 Also. He really hates dog hair.

I chose the master bedroom closet because it was larger and I actually haven’t had my clothes in a master bedroom for over ten years now. I can’t say it’s any better having them in the master because I’m so used to having a separate space for them, I don’t even think about it. 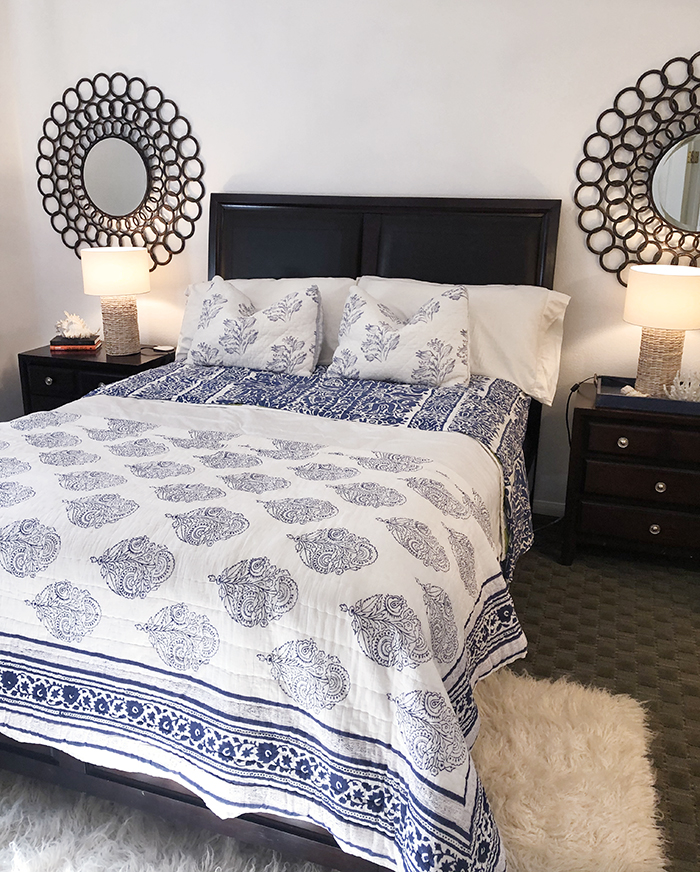 We left this room white because it was just easier that way and because it works. It may be slightly boring and under-decorated BUT It’s bright and breezy and has a lovely window that looks out to a forest. There is a large walk-in closet by the window and a bathroom on the same wall as the entrance door (which is pretty typical-plain-bathroom-looking at the moment, but I have given it a beachy touch, it’s still nothing to really speak of). I love that both bedrooms upstairs have their own bathrooms. We chose the girls’ room because that bathroom has a bathtub and felt closer to us (downstairs) than this room, which is at the end of the hallway.

I shot most of the photos with my iphone, which is why they’re not so great, but it’s just so much easier to capture the space with an iphone vs. my Nikon. I took some at night and some in the morning for different lighting, but in person, the room is nice and relaxing and we’ve had approximately two guests so far. I hope they enjoyed their stay 😉 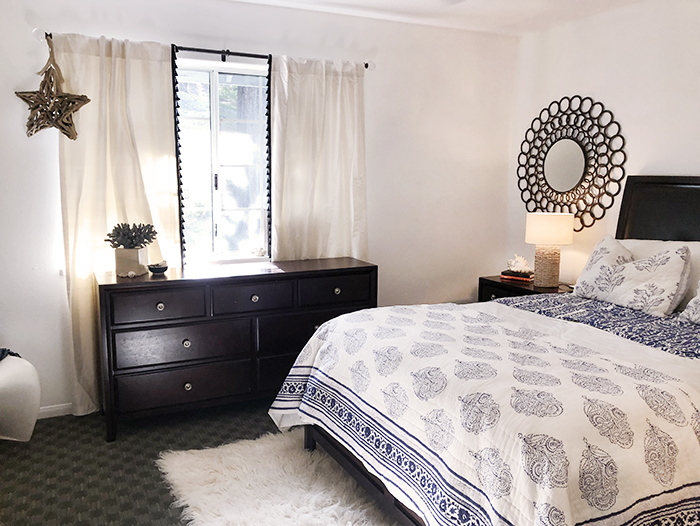 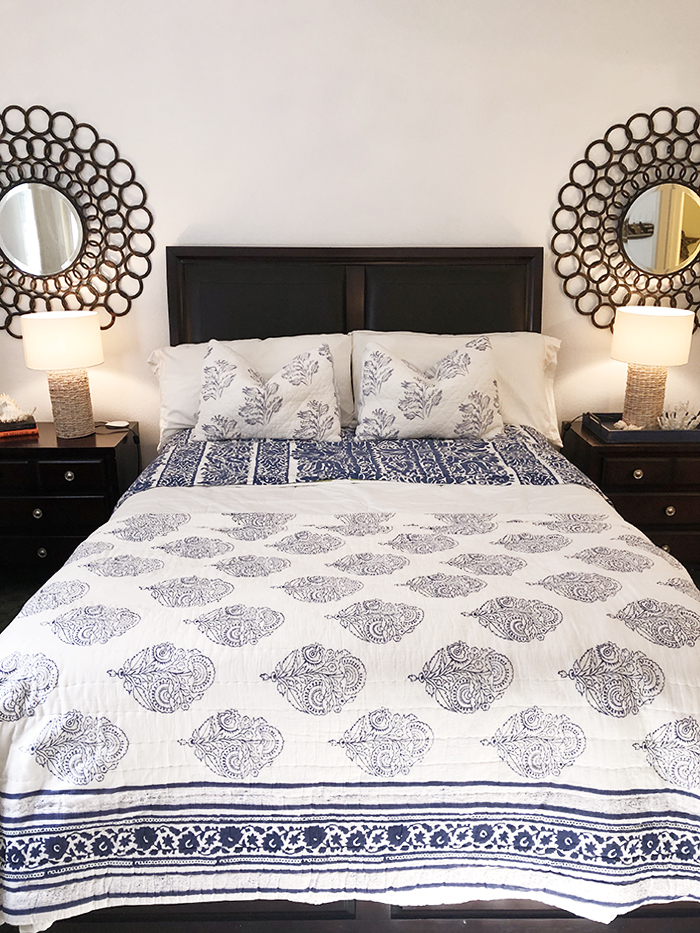 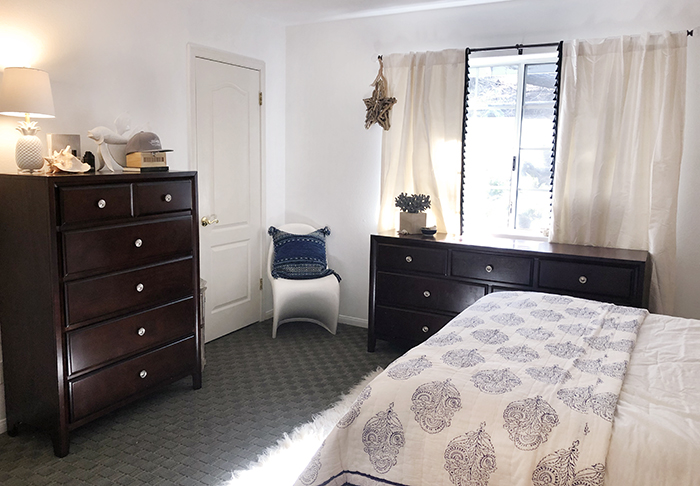 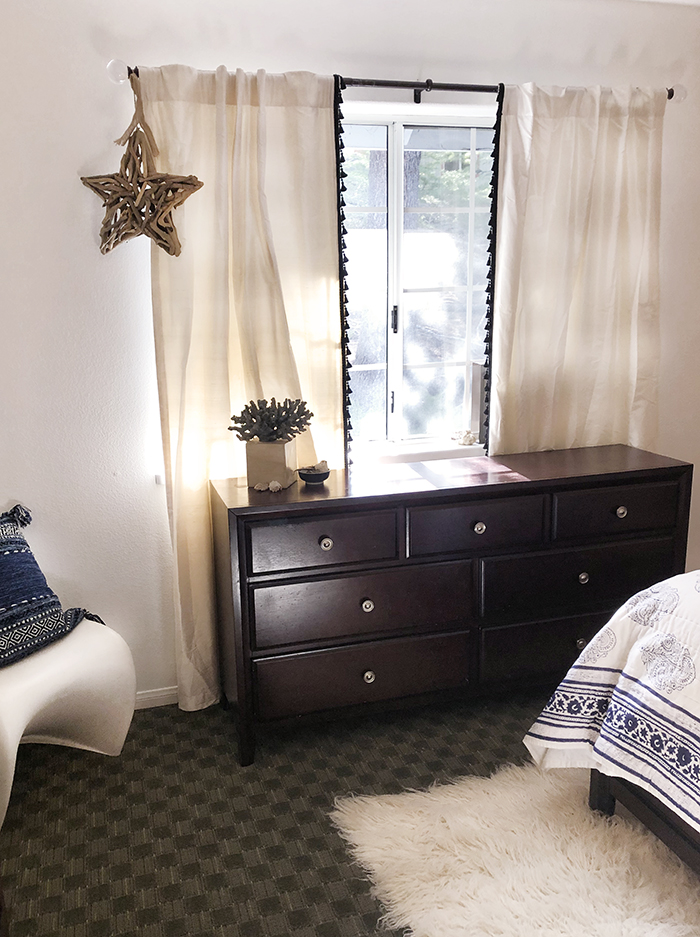 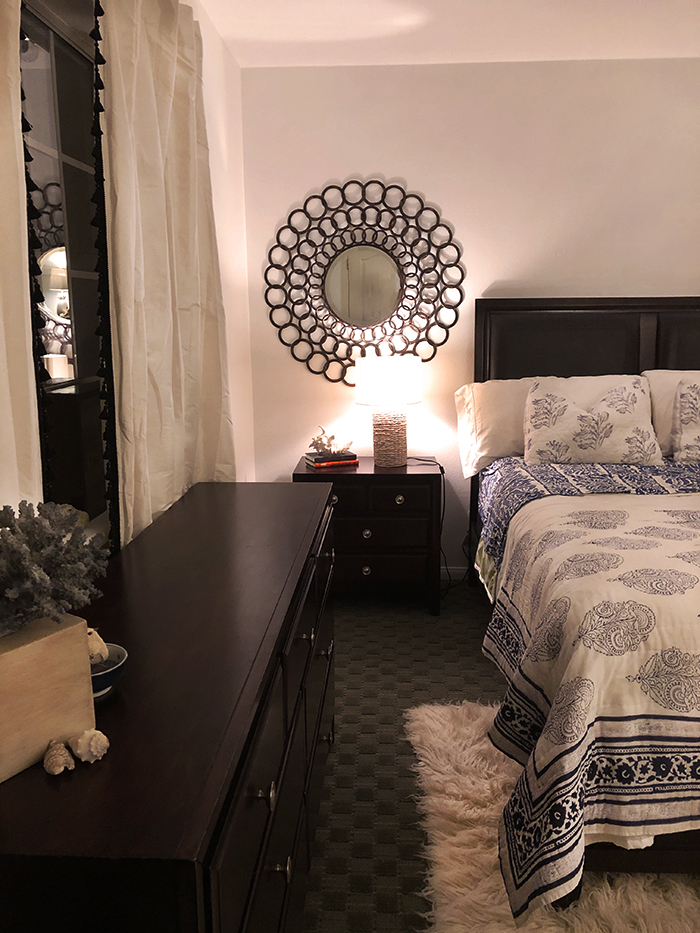 I have so much beachy-blue-nautical inspired decor from my last few houses that I could have put it everywhere. This main house doesn’t really lend itself to that style, which is fine (I’m kind of over it anyway) but I wanted to be able to use it rather than store it. I think it works in this guest room as well as the laundry room (because well, water, right?) so I’ve used the rest of the pieces in that space… it’s a small little laundry room, but it’s cute.